The boss of PetroSaudi International in London, Patrick Mahony, has recently been forced to deny rumours that he has been funding Hollywood’s ‘wild child’ actress Lindsay Lohan.

“For months now, we’ve been wondering how Lindsay Lohan finances her non-stop European bender, and it seems we may finally have our answer.

“Sources say that for most of the time she’s been in London, Lindsay has been living with Patrick Mahony – a much older investment banker with two daughters”[The Hollywood Gossip]

Lohan, who has been sent to jail for cocaine use and drunk driving and is regularly in rehab, is notoriously broke, despite her high earnings over the years.

The several articles on the subject, over August and September, speculated that Mahony provided the explanation for Lohan’s expensive partying around Europe, while she prepared for a part in a London West End play: 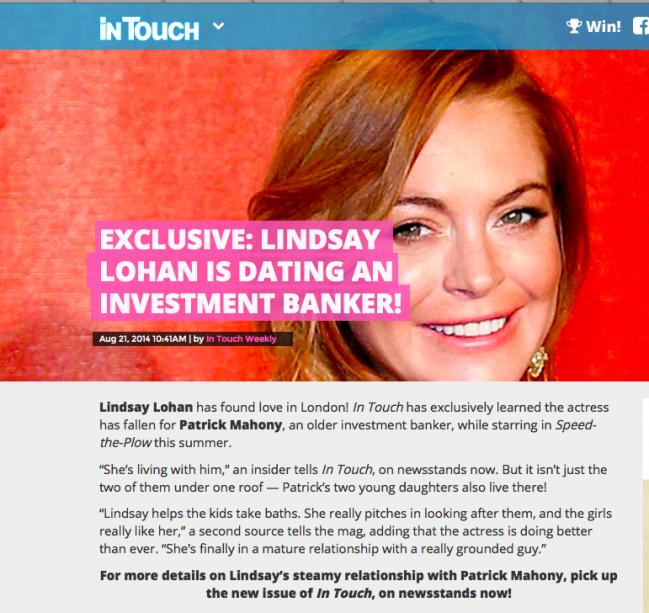 And who knows? Patrick and his kids could be a good influence on her. He clearly keeps her on a short leash financially. Just earlier this week Lindsay’s credit cards were declined after she racked up a $2,500 bar bill.

If there’s anyone capable of keeping Linds in check, it’s the guy who pays for her booze!” [Hollywood Gossip] 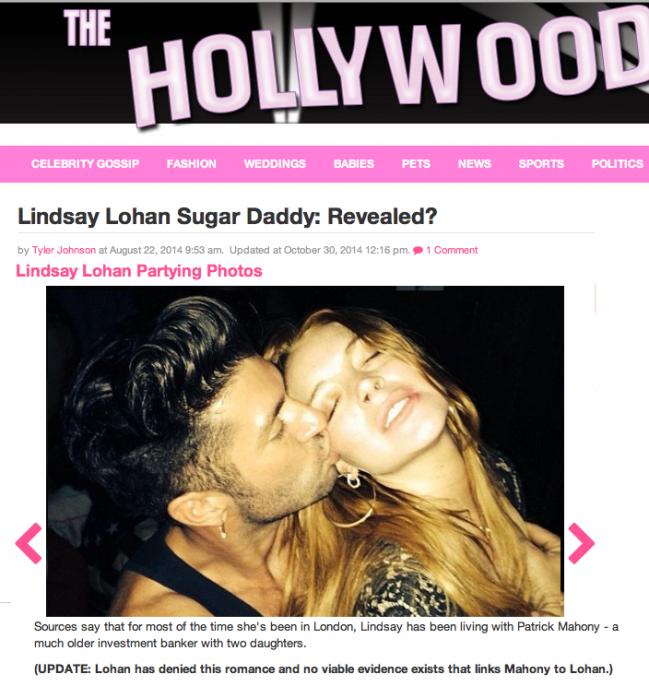 At 28 Lohan is considerably younger than middle-aged Mahony, who came in as the Chief Investment Officer of PetroSaudi International in London shortly after it scooped its $2.2billion ‘joint venture’ with 1MDB.

The couple were photographed arriving together at New York’s Newark Airport in July by the news service Getty Images, but have denied all speculation of a relationship. 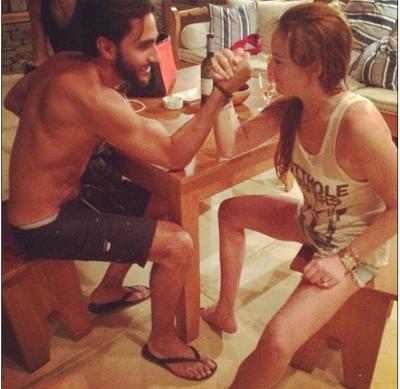 Lindsay’s August holiday snaps on board a Mediterranean yacht. Was it funded by her ‘Sugar Daddy’?

Sarawak Report has noted that funds seemed pretty low at PetroSaudi before this injection of Malaysian public money from the so-called development fund, which was started up by PM Minister Najib Razak with the help of another party animal, Jho Low.

But, the present executives are clearly enjoying the good life.

PetroSaudi International started a variety of initiatives after the 1MDB injection of cash into its business, including buying out Taib Mahmud’s family bank UBG in 2009.

This presumably accounts for Mr Mahony’s description as an investment banker, although PetroSaudi appears mainly engaged in oil exploration.

But, what has baffled and infuriated many Malaysian onlookers is that so little of the RM2.2billion poured into the so-called ‘joint venture” with PetroSaudi back in 2009 has ever been satisfactorily accounted for.

It soon became apparent that all the cash injections into the JV had in fact come from 1MDB alone and that PetroSaudi was not an investor, as originally advertised.

As a result 1MDB extracted itself from the embarrassing deal in 2011, having first funded PetroSaudi to buy out the venture.

Yet, even now, critics are pointing out 1MDB have failed to provide any transparent indication as to what has actually happened to the original money, apart from a vague explanation that it is being managed from an anonymous Cayman Islands account!

So much for developing Malaysia. 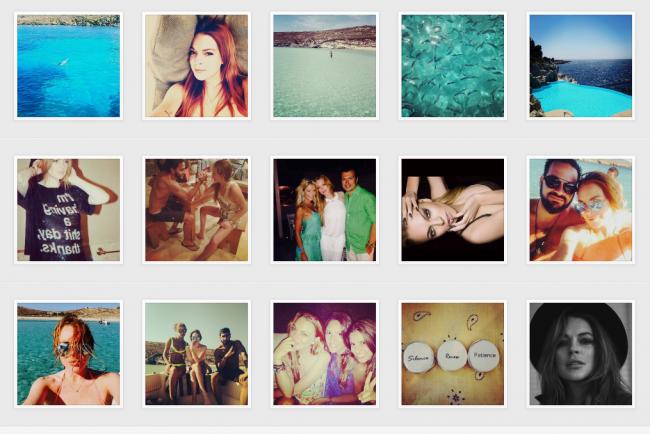 Has Lindsay’s party life been funded by the investments sparked by 1MDB?

So, with this evidence of Lohan’s continuing high-living and her links to PetroSaudi, critics will be entitled to query whether once again, the main beneficiaries of 1MDB’s development money have turned out to be decadent party-lovers in Hollywood, Las Vegas and the Mediterranean hotspots? 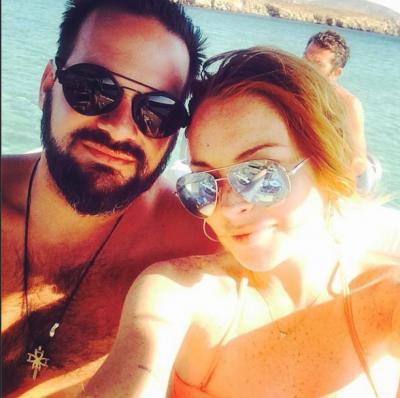 1MDB appears to have created prosperity in all the wrong places

1MDB watchers have already noted Hollywood brat girl Paris Hilton’s antics around the wealthy Malaysian Jho Low, who himself has been closely linked to Malaysia’s indebted fund. He paid her a million dollars a show to attend his events.

Next came the film Wolf of Wall Street, which was allegedly bankrolled by Mohamed Ahmed Badawy Al-Husseiny, the CEO of Aabar Investments and another partner of 1MDB.

The $100million dollar movie was produced by Najib’s son

To demonstrate a more philanthropic side, Jho Low has poured $50million into a cancer centre in Texas and $25million into a magazine at the UN, while PetroSaudi owner Tarek Obaid has got into Formula 1 and funded the wealthy US Mayo Clinic to the tune of $10million.

It is all a world away from the stated intention of the so-called development fund, which was to help bring prosperity to dirt poor Malaysians.

1MDB is currently over $40billion in debt on borrowed money.

Let’s hope none of it ended up Lindsay Lohan’s powdery nose!