Jho Low Splashes Yet More Of His Mystery Cash! 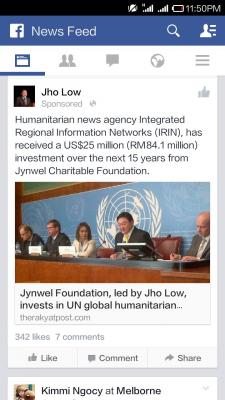 Low’s has tweeted about it non-stop for 3 days

The 33 year old Taek Jho Low has been out buying yet more high profile friends and contacts, this time at the UN.

Sarawak Report can further reveal that the cash incontinent young Malaysian has also been astounding the art market, by paying millions over the odds for trendy paintings. More later.

The announcement last week that the international body is going to ‘privatise’ its humanitarian news agency IRIN, thanks to a $25million bung from the self-styled “billionaire philanthropist”, has caused consternation amongst Malaysian NGOs.

The money is emanating from the foundation arm of his company Jynwell Capital and is clearly designed to position him as a serious philanthropic figure on the international stage, with friends of influence.

Given the growing speculation about the origin of all Jho Low’s unimaginable mountains of dosh, he possibly reckons he needs them.

After all, as Malaysians well know, when Low is seeking to cultivate a different crowd he is every bit as happy to throw his under-explained billions at Vegas gambling tables, party girls and record-breaking amounts of Crystal Champagne.

There was a different tack again when it came to buttering up Najib and Rosmah last summer.  On that occasion Jho Low and his pals hired the Tatoosh for a spin around the Med.

The Tatoosh is the world’s 26th largest super yacht and rents at around half a million dollars a week. It was the same yacht that Low used to entertain Paris Hilton in 2010.

A philanthropist on holiday – Tatoosh (with Hilton photographed on board inset)

Who scrutinised this donor?

Gushing officials at the UN were clearly mindful of all this money as they greeted the pudgy young Malaysian and announced his ‘generosity’ last week. 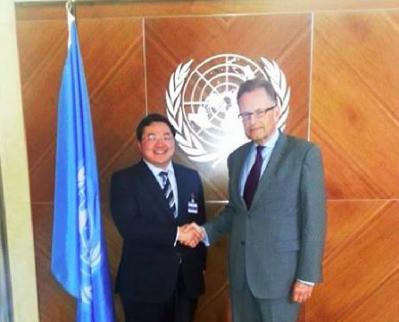 Welcome to the UN

The UN ‘Humanitarian Chief’, Valerie Amos welcomed his involvement, according to an IRIN press release, which claimed that under its new ‘independent existence’, IRIN would:

“continue to do what we do best: deliver in-depth reporting on crises often forgotten by the mainstream media”.

Director, Ben Parker, told reporters it was “felicitous that our new investor comes from the emerging rising powers” as the humanitarian aid industry changes “from a western-dominated construct to a multipolar world”.

But, many in Malaysia are bound to ask what due diligence had these UN folk done on the provenance of Low’s millions?

NGOs, who have brought Malaysia’s problems time and again to the attention of the UN’s humanitarian arms (to zero effect) likewise have their issues with the overly-wealthy Mr Low. 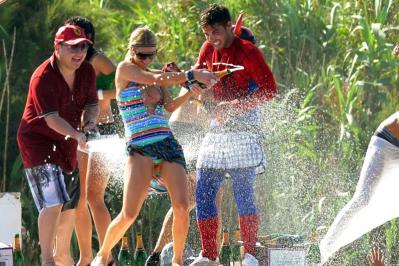 Let’s splash that cash! Paris and Jho Low like wasting money – but where did he get it from?

For example, there is the crisis in Sarawak and Sabah that has not only been forgotten by the mainstream media, but the UN and IRIN as well.

This involves the destruction of the Borneo Jungle and the decimation and exploitation of its native peoples.

Jho Low’s business has done well out of this particular tragic and under-reported story – it is one of the few concrete facts we know about it.

After all, his first specified job came as a non-executive Director of Taib’s own UBG bank 2008-10, thanks to a buy-out, in which the then 26 year old claims to have contributed 10%.

His 1MDB chums at PetroSaudi, who were of course being funded by Malaysian taxpayers money, bought it off him shortly after. 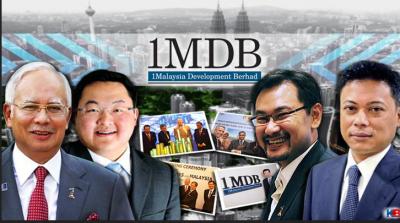 UBG’s wealth relates directly to the corrupted management of Sarawak, which in turn has driven the destruction of the Borneo Jungle, the looting of lands from its native people and the plunder of timber and other rich resources from the public ownership of the state.

Meanwhile, Jho Low’s own shadowy relationships with 1MDB, the company PetroSaudi and a series of deals involving Malaysia and the Middle East are currently at the centre of attention, concerning Malaysia’s biggest ever financial scandal.

The whole shambles has been made possible only by a disgraceful lack of transparency, which opposition politicians and BN’s own ex-Prime Minister have united in condemning.

Despite the confusion and lack of information, it is clear there is an uncomfortable juxtaposition between a borrowing exposure of over $40billion by a public body that does not appear to be able to account for very large parts of it, and the ridiculous level of sudden wealth of this politically well-connected young businessman, who has been most intimately connected with the main players in all 1MDB’s dealings.

And as Sarawak Report has also earlier noted, Riza Aziz the PM’s step son, who also turns out to be a super-close pal of Jho Low, seems equally unable to explain his own secretive wealth.

What due diligence was undertaken by the UN?

Jho Low may indeed be a most fortunate investor and have managed to acquire tens of millions between the age of 25 in 2005 when he left Wharton Business School in Pennsylvania and the age of 28 in 2008 when he was buying into UBG bank – and then billions by 2010.

We can give him the benefit of the doubt on that.

But, given the sparseness of his CV and the vague and anecdotal nature of his explanations about his wealth, ought not the UN humanitarian agencies be looking for a little more concrete information before they take his money?

After all, one of those untold stories in which IRIN is supposed to specialise is the destruction by Malaysian corrupted businesses of the Borneo Jungle and the raft of human rights abuses against its native people, including the systematic rape of Penan women by logging workers.

Another is the use of enslaved labour in the same areas and another the appalling treatment of immigrant workers all over Malaysia. 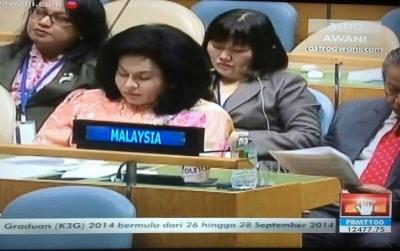 Key ‘friends’ have been the route to Jho Low’s wealth, as he openly admits – amongst them Rosmah Mansor, herself recently at the UN

Will Jho Low’s influence improve the coverage of these matters, given his own intimate ties with the corrupted Taib family and also those corrupted BN politicians, who are at the moment failing to come up with basic answers about where missing hundreds of millions of dollars have disappeared to in the matter of 1MDB?

Jho Low admits to being the original architect of 1MDB, after all.

It is never helpful when people appear to change their stories about their past, if you are trying to understand the story of their wealth and success.

Yet this appears to be another problem with the mysterious businessman Jho Low.

When journalists first started to quiz him on his spending way back, when he got suddenly wealthy in 2009, he made out that the money wasn’t his.

Interviewers were told that Low came from a moderately wealthy background and that he acted as the “concierge” who fixed a good time for far wealthier friends he was trying to suck up to.

This way, he intimated, he hoped to get their parents to invest money (a few hundred million here and there) in his student projects. But, the money he was spending around town wasn’t his, he explained:

A: That’s the interesting part. I think probably it was more to do with the public relations aspect of it because, as a Malaysian, I come from a fairly okay family but nowhere as close to the prominence and wealth levels of the people that I usually spend time with who also are my very good friends. So generally, I am usually the concierge service that arranges everything, and thus my name is all over the place.

Q: So you were the fall guy?

A: I wouldn’t say I was the fall guy. I am the person who called and made the reservations, the bookings and so on. Unless of course, we were invited by others, then the others made the arrangements.

Q: Was it because they were less well-organised and you more organised?

A: No, I think it was more because most of their families were my investors.

Q: So you were looking after your investors?

A: Yes. I go through the entire motion. I think a relationship with an investor is not just about managing their money well. Although it is not in my job scope, but if my friend says he wants a flight urgently to somewhere or he wants a dinner reservation at a well known place, I’ll do my best to make it happen.

A: I think factually there was a party being thrown for a friend’s engagement which I was told cost around US$160,000. Left to me, I would not spend that kind of money.

Q: So what about your birthday party in Las Vegas?

A: It was actually a group of my close friends; some of them were my investors who threw me this surprise party which I must say was memorable and phenomenal and I was very surprised by it. I guess that is what good friends are for. It was for my 28th birthday last November.

Q: Did you guys book almost the entire Caesar’s Palace for this?

Five years on, Low is now  a fully established “billionaire philanthropist” of great renown.  These days he confidently claims the money as his own.

Yet the background family story no longer appears quite the same.

Low is now being increasingly described as being from the third generation of a billionaire family.

“Jho, the third generation of a billionaire Asian family, had previously generated global headlines for his parties with Usher, Leonardo DiCaprio and Jamie Foxx. Now, he is certainly drawing headlines for his astute merger and acquisition skills. [Rakyat Post]

So did Low really make his cash from charming the parents of insanely rich Arab friends, who threw their money at him so willingly that he made vast profits himself?  Or was he rich himself all along?

Given that his rise to riches took place during the nadir of the world economic downturn and that the few advertised enterprises in which he has been involved (purchase of RHB, UBG, Tun Razak Exchage) have not been visibly successful in any major sense, it is perhaps not surprising that his original family wealth has turned out to be a useful fall back.

Mr Low said his interest in Irin was inspired by his grandfather, Dato’ Low Meng Tak, who made his fortune in mining and liquor and used to send cheques to causes and people he read about [Financial Times]

No one denies that the Lows are a successful family. But, to what exactly does this billionaire super-status owe and when did it kick in, Malaysian are certainly asking?

Did the UN ask the same thing and can they let us know the answers if they did? 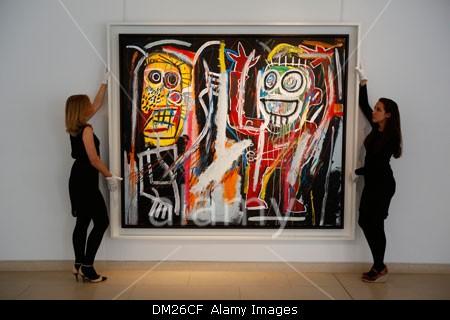 Christies sold Dustheads for a record price – to Jho Low

Which brings us to the latest finding on Jho Low’s eye-popping extravagance. 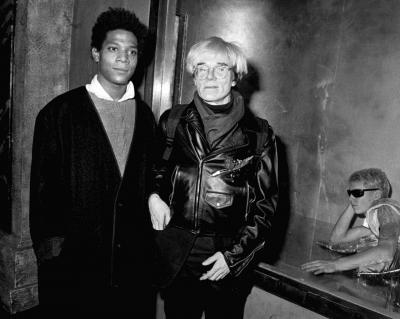 Basquiat’s Dustheads, painted in 1982 had been expected to retail for an already impressive $25-30million, given his Warhol groupie status.

Warhol apparently fell in love with the young street artist, who gained further fame for his work by dying of a heroin overdose aged 27.

Sarawak Report has learned from researchers that Jho Low was indeed the buyer of the painting sold in New York on May 13th 2013.

Low was so keen to get hold of this trendy work (believed to be admired by Hollywood friends such as Leonardo di Caprio) that he chucked a total of $48,843,750 at the auction – which could have saved a lot of GST payments, of course, for the poor people of Sarawak or transformed the fortunes of the native textile industry if he had spent it there instead.