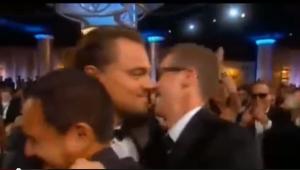 At Hollywood’s glittering Golden Globe Awards last week two new ‘hotshot producers’ basked in the limelight, as the star of their latest movie took the award for best actor in Wolf of Wall Street.

Riza Aziz and Joey McFarland of Red Granite Pictures enjoyed a special mention of thanks in Leonardo Di Caprio’s acceptance speech for “taking a risk on this movie”, which their company famously bankrolled to the tune of $100million.

“Thank you Joey, Riz and Jho for not only being collaborators but for taking a risk on this movie”, said Di Caprio, as the cameras cut to the two beaming young men, who were sharing  a table with the film’s legendary Director, Martin Scorcese. 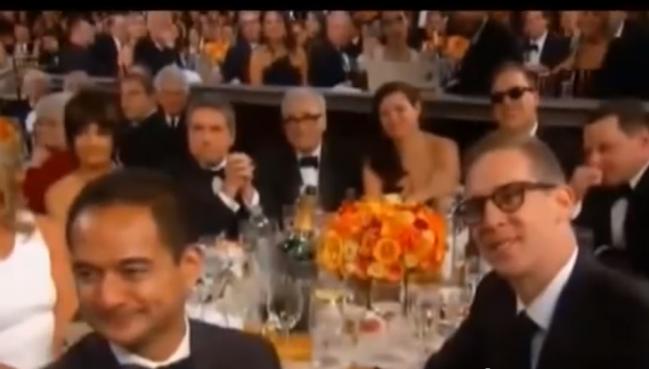 Basking in the thanks, Riza and Joey (foreground) listen to the speech – Scorcese behind.

But many in the audience of Hollywood insiders have been left wondering who exactly are these two newcomers to the business and in particular what production background has Joey McFarland, who runs the company? 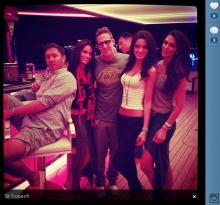 Sarawak Report conducted a special assignment in Hollywood last week, unearthing some of the answers.

We can confirm that before Red Granite was launched in Cannes in May 2011 Joey McFarland worked as a party planner and celebrity booking agent for private events.

The agency was called Global Talent Booking; their top celebrity for hire was Paris Hilton and Joey’s main best client was none other than the notorious fun-loving Malaysian ‘billionaire tycoon’, Jho Taek Lho (also referred to above in Di Caprio’s acceptance speech at the Golden Globe Awards).

“I’d never heard of Joey McFarland.  He has no part in the business that anyone knows or cares about. The only credit that he had before Red Granite was as Paris Hilton’s side kick”

The Hollywood establishment has meanwhile picked up on another noteworthy and highly unusual gesture. Jho Low has been singled out for special thanks by Red Granite for Wolf of Wall Street, with a full screen credit all to himself, which features at the end of the $100 million film, straight after the main titles. 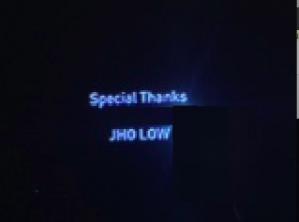 Such a form of accolade to an individual behind the scenes is almost unprecedented say those in the industry. The credit does not specify what the thanks are for, but Mr Low’s known specialisms are accessing massive private investment funds and financing hugely expensive parties.

“It is the first credit after the main title credits (which are at the end in this film). This is very unusual, I can’t remember ever seeing something like this.” Another top Hollywood producer told Sarawak Report.

If anyone wanted confirmation of the links between Najib’s stepson’s sudden spending spree in Hollywood and Malaysia’s most controversial businessman this is it.

So, little surprise that Mr Low was present and prominent at all the major premieres for the film, including the latest in Paris, where he featured in the line up next to Leonardo Di Caprio, Director Martin Scorcese and the Red Granite duo. 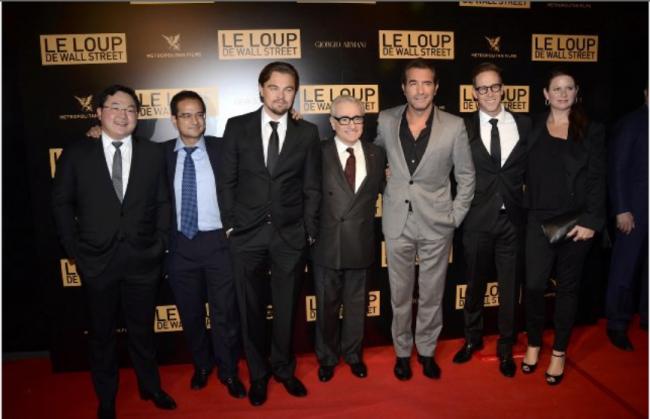 The connection has already got much of Hollywood whispering and it ought to raise serious questions in Malaysia, where Riza Aziz is a highly politically exposed person as the stepson of the Malaysian Prime Minister since 2009, Najib Razak.

After all, it has been widely reported that Jho Low is a young man whose business dealings have engaged him in close contact with political decision-makers, including Taib Mahmud in Sarawak and Riza’s stepdad, Najib Razak. 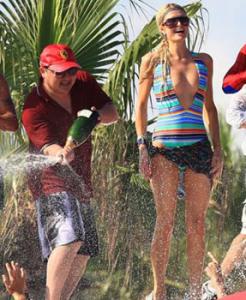 This is particularly with respect to the controversial public investment body 1Malaysia Development Bhd, set up by Najib with Jho Low’s help, according to its own website.

The young man’s incredible profile as a twenty something, who went from nowhere to billionaire status, has also caught widespread media attention, causing astonishment in the US and Malaysia alike.

The Penang born businessman has claimed that his phenomenal financial success was all thanks to wealthy school pals, acquired during his two years attending Harrow in the UK and four years at the Wharton Business School in the US.

In fact, he has claimed that much of the money he has splurged on a constant round of extravagant parties since 2010, in the world’s top venues and nightclubs, has actually been their money not his, describing himself as the “concierge” and party fixer, taking care of his friends and investors, but not the real person footing the bills.

Sarawak Report heard talk of one recent event in Hollywood, where he reportedly bought 80 bottles of Dom Perignon champagne and tipped a whopping $80,000. If so, it would be nothing new.

“These guys party all the time.  About once a month they go off somewhere like Vegas and party hard with Leo and their friends. Jho Low pays for the private planes and the gambling chips. There’re always crowds of available women”.

The parents of Jho Low’s rich friends, who hark from Malaysia and the Middle East, are also happy to trust him with their investments, according to interviews given by Jho Low, .

This knack of impressing people’s parents soon had him rich enough, it seems, to buy New York’s second most expensive home back in 2010 at the age of 28 (the penthouse in the Trump Tower at $33million).

But, he soon sold it on at a loss, before buying another headline catching apartment at the top of the Time Warner building for $31million in 2012.

This means that Jho Low is either personally now very rich indeed or that, as with the parties, he is also acting as concierge and front man in the purchase of these homes.

The question bears relevance given his now proven close connection to the multi-million dollar business ventures of Najib’s stepson in Hollywood and the wider world is wondering quite how these stories all add up. 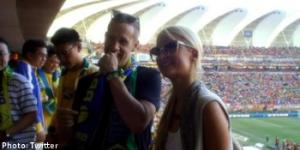 Joey partying with good friend Paris in South Africa, before she was picked up with drugs in her handbag (Jho Low left)

Riza Aziz is the registered Director of Red Granite Pictures, but associates in the business say that 36 year old Joey McFarland is the man who does the work when it comes to fronting up the company.

However, the impression gained by reporters is that he went into the investment business after leaving Louisville University in his native Kentucky.

McFarland has been described variously in the press as a “private equity vet” and “private equity cowboy from Kentucky”, giving the impression of a wealthy and experienced investor. 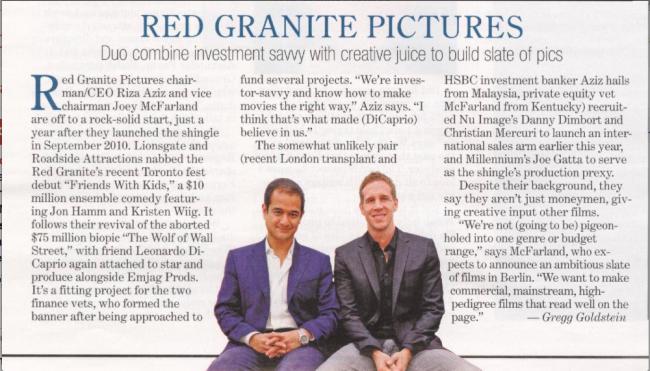 The original plan was to keep a low profile, one associate told Sarawak Report.

However, Sarawak Report can reveal that when McFarland arrived in Hollywood back in 2008 he took up the job of ‘party planner’ in modest circumstances. 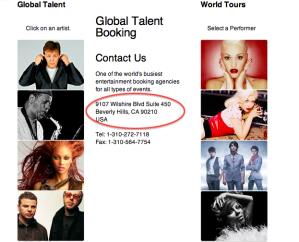 He lived till the end of 2013 in a rented three bedroom house in Hollywood, sharing with a friend.

Before that, Mr McFarland had lived in an apartment block Cincinnati.

Insiders have confirmed that in his previous job as a manager at the company Global Talent Booking, his main role was hiring celebrities to attend people’s parties and private events.

Sarawak Report has been told that it was in this capacity that he first met Jho Low, who was busy going about making a public splash, partying with famous faces and running up enormous bills in top nightclubs.

According to our research, Global Talent Booking operates out of a “virtual office” located at 9017, Suite 450 Wilshire Boulevard in Hollywood, which is an answering service located at a Beverly Hills address, designed “to impress your clients”, according to advertisements. 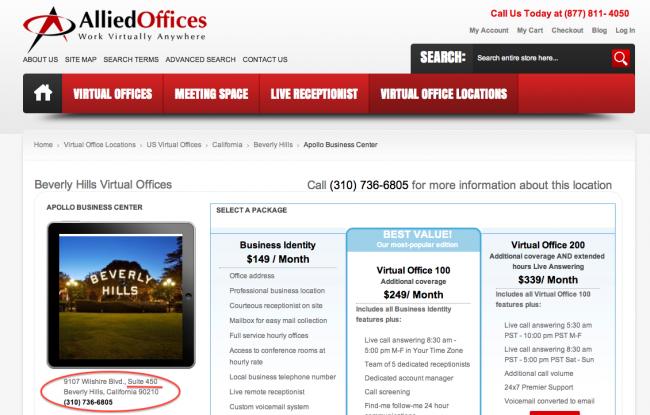 The service is on offer for $240 a month by the host company Allied Offices.  And when we rang Global Talent Booking and asked to speak to Mr McFarland we were told he was “away from his desk”, but definitely “in the office” if we wished to leave a message.

Its premises may be virtual but Global Talent Booking promotes an impressive profile through a bespoke online site, claiming to have some of the world’s most famous celebrities on their books, available for hire to appear at private parties and events. 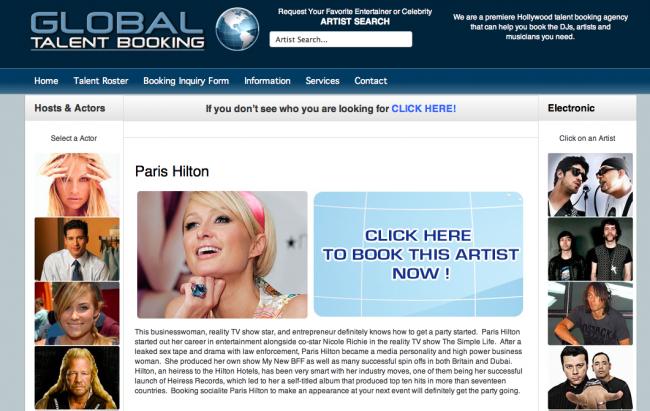 Available to hire for your special private party or event. Paris Hilton can be your paid celebrity guest.

The most promoted of these is the “celebrity it girl”, the fun-loving socialite Paris Hilton, who previously denied that she was being paid by Jho Low to attend any of the lavish parties he funded in New York, Las Vegas, Cannes and St Tropez, where she played the trophy, attention-grabbing guest. 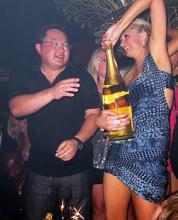 Magnums of Crystal in St. Trop

However, research into Mr McFarland’s Twitter messages confirm what Hollywood insiders have told us, which is that Mr McFarland was indeed Paris Hilton’s booker for celebrity events and she was most satisfied with his services.

“I love my friend Joey McFarland” Paris tweeted in December 2009. “Every event he sets up for me is amazing and he is always such a professional at everything he does”

Joey gushingly tweeted back “@Paris Hilton It is an absolute pleasure to have the opportunity to work with the most popular female Celebrity Princess in the world !!!”.

Insiders in this social scene have again informed Sarawak Report that this round of happy parties in New York, the South of France and other hotspots were also habitually attended by Jho Low’s very close friend, Riza Aziz.

Aziz has acknowledged that he threw in the towel on his investment banking career after 3 years as a junior at HSBC in London in 2008, shortly before his stepfather Najib became PM.  Making him a man with time on his hands, known to be keen to enter the movie business. 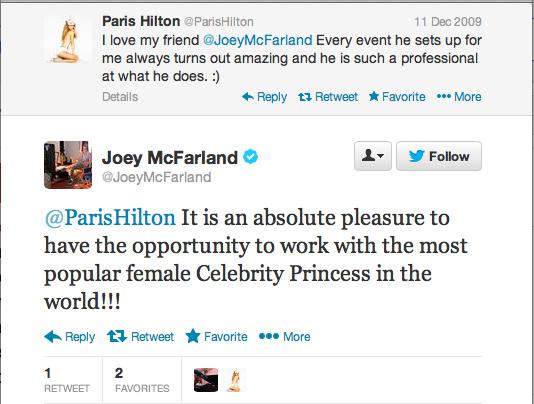 The revelation that Joey McFarland struck up his relationship with Jho Low and Riza Aziz through his role as their party planner and celebrity booker will send waves of consternation through certain quarters in Hollywood.

Just how much was her fee for partying in Paris?

It will fuel the question that is being increasingly asked, which is how come these Hollywood newcomers, Red Granite Pictures, have managed to raise hundreds of millions of dollars to throw at a several movies, at a time when veterans in the business are struggling to raise finance?

Part of the answer clearly relates to Jho Low and the Malaysian connection. Raising the issue of who would choose to invest hundreds of millions in a production company owned by the son of Rosmah Mansor and run by a party planner, neither of whom have had previous experience in making movies? 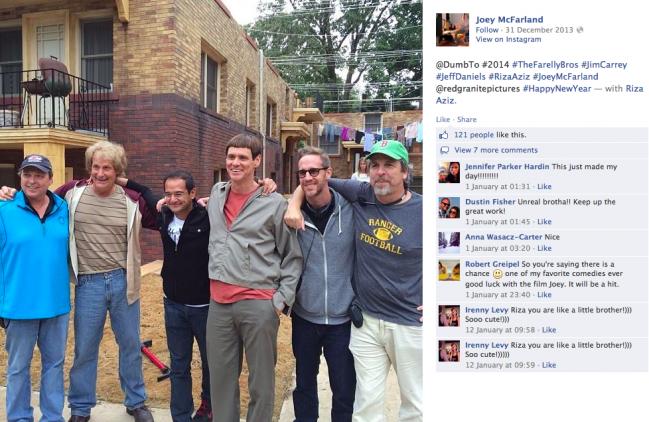 Next big project – Aziz and McFarland plus stars Jim Carey and Jeff Daniels and Directors the Fairly Brothers, Dumb & Dumber To