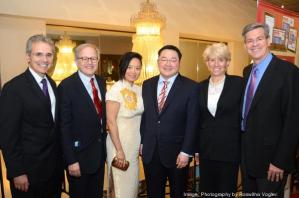 At the awards dinner, where he was nominated International Entrepreneur of the Year!

Malaysians will be interested to know that just last month the Penang born pal of Rosmah Mansor and her son Riza Aziz, Jho Low, aged 32, was honoured in Houston for his philanthropic gift of a whopping US$50million (RM163million) towards cancer research at the University of Texas.

In response, Houston’s Asian Chamber of Commerce named him as the first recipient of their brand new award of International Entrepreneur of the Year at a glittering ceremony on April 11th.

Many back home might think that RM163million might have gone a long way to assist in basic health care for Malaysia’s poorer communities in places like Sarawak, where many rural clinics lack doctors. 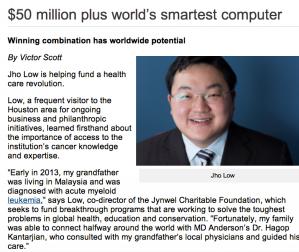 Making a name for himself in Texas!

Texas on the other hand is one of the richest places on earth, and the recipient of Low’s philanthropy, the Anderson Medical Centre, describes itself as already having “unparalleled resources and capabilities”.

Therefore, Sarawak Report investigated to see whether there might be a business connection to Mr Low’s philanthropy and learnt that in November of last year Jho Low spent 2.3 billion dollars in buying out the company Coastal Energy from the jailed Houston oilman Oscar Wyatt.

His partners in the deal were the same Abu Dhabi sovereign wealth fund, IPIC, with whom he engaged in a prolonged and serious attempt to buy out a controlling share of the company Coroin and its stake in London’s Maybourne Hotel Group in 2011.

Sarawak Report has also forced Low to concede that there was another interested party involved, backing his company Wynton in that deal, namely 1MDB, Malaysia’s sovereign wealth fund, which he has spent the last three years claiming he has done no business with.

“So who are these investors who will take over Coastal’s roughly 150 million barrels of oil and gas reserves, mostly in Thailand and Malaysia? The primary buyer, Madrid-based CEPSA, is owned by the Abu Dhabi state oil company International Petroleum Investment Co.[IPIC also owns Aabar Investments which bid for Coroin] It has 11,000 employees. Another investor in the deal is Strategic Resources, an investment holding company controlled by Larry Low and his son Jho Low, 31, CEO of Hong Kong-based Jybnwel Capital. The Lows have a history of dealmaking, providing the link between Middle Eastern sovereign wealth funds and investments in Asia. In June 2012, Jynwel was an investor with Sony n the $2.2 billion acquisition of EMI Music. Jynwel also recently participated in the takeover of lingerie boutique chain Myla.”[Forbes.com]

Malaysian investor, who always claims his sovereign wealth supporters are only from Abu Dhabi and do not include his close friends who run Malaysia’s 1MDB 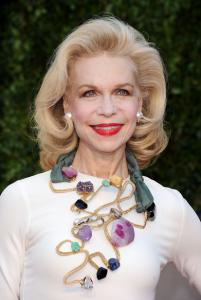 Septuagenarian southern ‘style icon’ Lynn Wyatt, bailed out by Jho Low’s half billion purchase of her husband’s shares in Coastal

Making a name in oil-rich Texas?

In Texas Low was primarily credited with restoring the fortunes of one of its favourite socialites and local Southern style icon Lynn Wyatt, Oscar’s wife.

Wyatt’s stake in the deal amounted to around $500million dollars’ worth of shares in Coastal, which were bought at a 28% premium rate above the price of the previous day’s close in November of last year.

Now that Low has extended his charity to “numerous contributions” in the town as well, according to the newspapers, his status in Houston seems as assured as it is in Hollywood, where it has been noted he received a special credit at the end of the film Wolf of Wall Street and he has bankrolled numerous party events.

But, Malaysians remain mystified as to the sources of all this capital behind the youthful entrepreneur’s extravagant buy-outs and hand outs.

Today Jho Low issued a rare statement and a series of denials with regard to Sarawak Report’s earlier exposes revealing that his separate bids for the Maybourne Hotel Group were backed by One Malaysia Development Berhad (1MBD), the sovereign wealth fund set up by his pal Riza’s Dad, the PM Najib Razak.

In his statement the youthful tycoon acknowledged his role as the leader of the hotel bid, as stated by a UK judge David Richards in a detailed judgement on the matter in a related court case.

However, Low attempted to down-play the whole affair as an “early stage investment opportunity” that went nowhere.

He also implied that 1MDB was involved merely as “one of the several investors invited … to evaluate this early-stage investment opportunity in 2010/2011″ and repeated an earlier claim that he has never “received any compensation or patronage directly from any entity wholly owned by the Malaysian government”.

“Mr. Low was a co-investor and led the coordination efforts for the proposed bid for Maybourne Hotel Group (Claridge’s, the Connaught and the Berkeley in London) along with Aabar Investments PJS (an Abu Dhabi Government controlled sovereign wealth fund entity).1Malaysia Development Berhad (1MDB) was one of the several investors invited by Aabar Investments PJS to evaluate this early-stage investment opportunity in 2010/2011. To facilitate the bid, some initial interested investors provided preliminary letters of intent in support of the bid,”[statement by Jho Low, 4th May]

Sarawak Report suggests that these denials conflict with the facts, which are now in the public domain.

Because, according to the widespread coverage of the time, now researched by Sarawak Report, 1MDB did not merely provide “preliminary letters of intent”, it forked out €49.1million to buy up debt that secured a stake in the business Mr Low was trying to acquire.

This is how Justice David Richards explained the manoeuvre in his judgement, which he goes on to conclude showed not just a ‘preliminary intent’, or ‘early-stage opportunity’ but what he calls a “serious interest in the company” by Jho Low’s own company Wynton. 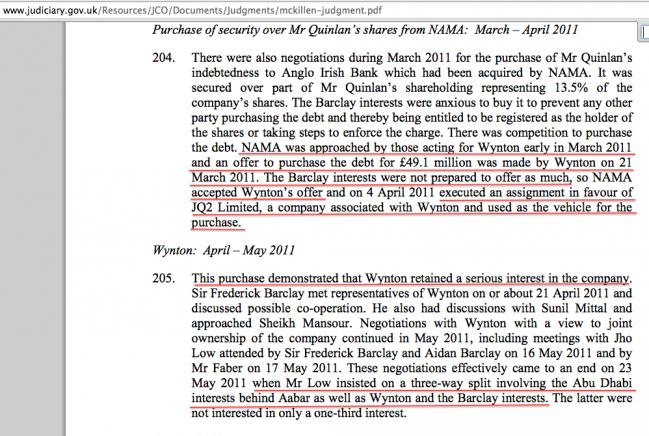 The money to buy out €49.1million in debt came from 1MDB according to reports

What Sarawak Report has now established is that the purchase, through an associated company called JQ2, was financed, according to newspaper reports by 1MDB Malaysia (see below).

Furthermore, as the judgement also makes clear (above) when Jho Low suggested sharing the purchase with the UK entrepreneurs the Barclay brothers, he was talking about a three way split with Aabar Investments (another subsidiary of IPIC) and Wynton. 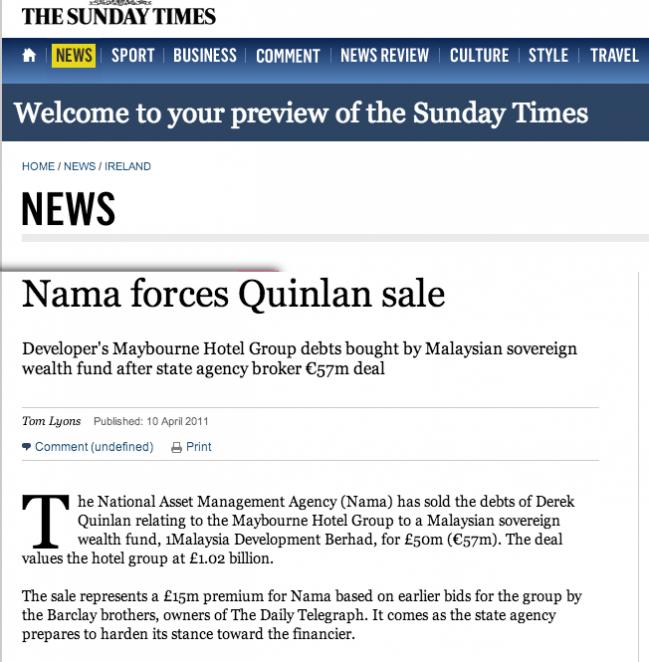 The purchaser was 1MDB – so no benefit to Jho Low?

We therefore suggest that it is plain and obvious that 1MDB was the key investor behind Wynton, because it makes little sense for the Malaysian sovereign wealth fund to have forked out €49.1million and written letters backing the Wynton bid, if it was not an interested party in this deal.

This begs a question of all Jho Low’s denials that he has ever profited from dealings with 1MDB. Because, as the private equity coordinator of the deal he was evidently expecting to profit and money was paid out by the fund.

Likewise, why has 1MDB’s boss insisted that Jho Low had “zero” involvement with the fund, when evidently this was not the case?

In his statements of denial over the past 24 hours Jho Low did not once refer to this huge recorded pay out by 1MDB to the Irish asset management agency Nama in clear support of his Maybourne Hotel Group bid. Sarawak Report requests that it is time he includes an explanation for this matter.

Both Jho Low and his party pal Riza Aziz refer to themselves as philanthropists, a title generally bestowed (by others) on the very rich, when they distribute significant sums of their personal wealth to the less well off in need.

Riza Aziz has published no evidence of such donations nor, indeed,  has he been able to explain his position of such wealth.

As for Jho Low, he explains in his Jynwell Capital website that he aims “to promote, encourage and support the advancement of education and the relief of poverty globally”.

However, no examples of his projects are provided in the website.

Low’s ‘Linked In’ website elaborates that his foundation is committed to “accelerating advances in public health, environmental & wildlife conservation and education in every corner of the world”.

So, we have heard about Texas.  How about Sarawak, Malaysia, the place on the globe where wildlife is most threatened and where public health and education are shockingly neglected in a oil rich, coal rich, timber rich, gold rich, palm oil rich state? 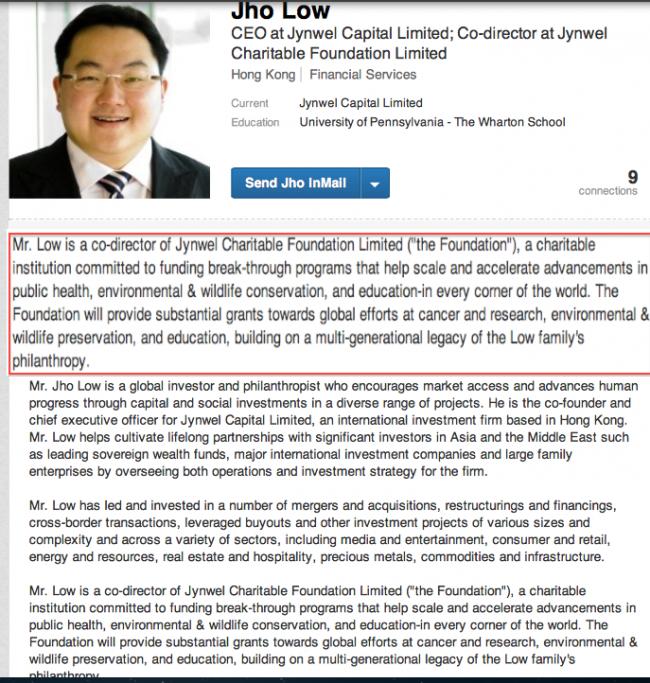