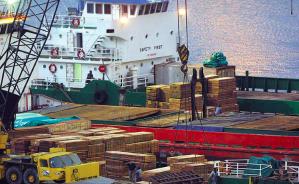 Sarawak Report has researched the global reach of Sarawak’s timber mafia and we can reveal a web of logging interests that have spread into every remaining tropical timber region of the planet.

This extraordinary penetration by Sarawak’s top timber companies is the result of the system promoted by the Mahmud regime, which funnelled virtually all the profits from logging an entire country into the hands of just a few companies.

The big 6 have been Samling, Rimbunan Hijau, WTK, KTS, Shin Yang and Ta Ann and they have all been intimately linked in business to Taib Mahmud himself and his own family.

With the enormous profits made in the 1980’s and 90’s from logging these companies were able to buy their way into other wilderness areas, using the same corrupt methods that served them well in Sarawak. These include ingratiating and bribing local politicians and officials; thuggery against tribal landowners and side-stepping protective legislation against indiscriminate logging.

Time and again these and other Sarawak linked enterprises have been accused of such practices from Latin America, through the Congo to the Far East jungles of Kalimantan, Tasmania and Papua New Guinea. 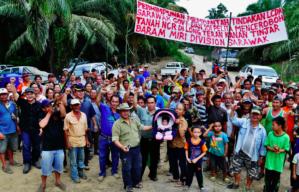 In Sarawak itself, thousands of indigenous people have lodged police reports, complained to the state government or filed court cases against companies for illegal logging.

Most cases have been ignored by the authorities and it is the communities and native rights lawyers who have to battle their case through a slow and reluctant justice system.

Now, these very companies are operating in the same way across the globe, greedily grabbing land and oppressing local communities.

These Malaysian companies seem to be particularly insensitive to the law, human rights or the environment. Where others might hesitate for the aforesaid reasons, Sarawak’s ruthless and experienced timber tyrants are landing like locusts.

Rimbunan Hijau, run by the Sibu billionaire and Taib crony Tiong Hiew King (whose brother is a federal MP), have been fined by the Brazilian environment agency for possessing illegally logged wood and investigated by the country’s Federal Prosecutor for its role in the illegal log trade.

The same company has also been frequently fined for violating environmental regulations in Soukpal, Russia and on the island of Vanuatu and accused of performing the “worst logging seen in any tropical forest” and providing poor workers conditions in the Solomon Islands. 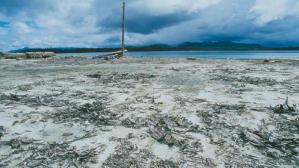 Likewise, Samling, run by another billionaire crony of Taib’s, Yaw Teck Seng, has been internationally condemned for environmental destruction in regions such as Guyana in South America, Cambodia and Papua New Guinea.

In 2012, companies linked to Samling were exposed for grasping nearly a quarter of the largest remaining area of the Liberian rainforest.

Their partner in that scandal, which involved abusing a system of local permits for forest dwellers, was Taib’s own cousin, Hamed Sepawi, who has his own local record of destruction as the main shareholder of Ta Ann in Sarawak and of numerous other enterprises and oil palm plantations.

In January 2013 the Samling/ Sepawi partnership was finally kicked out of Liberia by Presidential decree. The Executive Order, which was announced by President Ellen Johnson Sirleaf stated that:

“the report issued by the Special Independent Investigating Body has revealed that there have been massive fraud, misrepresentations, abuses and violations of the National Forestry Reform Law in the issuance of Private Use Permits to the extent that this inter-generational asset has been severely threatened….because the mismanagement of the PUPs poses a threat to the efficient, effective, and sustainable management of our forests, it is imperative to impose a moratorium to protect the national interest”

Gangster tactics at home and abroad 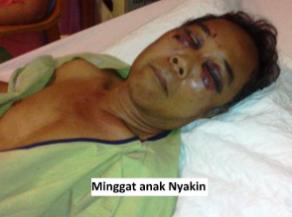 Sarawak Report suggests that it is time the international community took note of the menace presented by the Sarawak timber mafia, not just in terms of environmental destruction, but to ordinary people who are being affected by violence.

Logging companies in Sarawak often employ gangsters to threaten and intimidate indigenous communities who try to resist encroachment on their land.

This gangsterism has been able to flourish due to a virtual media blackout on the issue and a refusal by the authorities to act.

It is not uncommon for communities to see truck loads of gangsters turn up at their village and threaten them with guns or parangs.

In 2012, we covered how Minggat Anak Nyakin and his son Juan Anak Minggat were beaten to within an inch of their lives by gangsters who were teaching them a lesson for protesting against the destruction of their lands by loggers.

Last year it was the turn of the dwellers in Melikin, including Surik Anak Muntai, who was beaten up badly and just this week, photographs have emerged of thugs attempting to intimidate indigenous protesters at the Baram dam blockade. 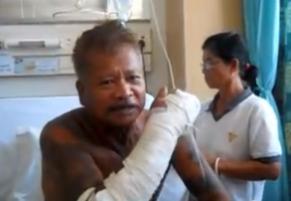 Surik Anak Muntai – beaten up as he picked up his son from school – had led the protest against loggers in Melikin, Sarawak

The problem was referred to in Malaysia’s Human Rights Commission (SUHAKAM) own report in 2011, which revealed how in Sarawak:

“there were complaints on the use of thugs by companies, and biased police and field force personnel to threaten people”

Publication of that report was later suppressed to spare embarrassment.

An Oxfam report published in April of this year, reported that communities in Terubu, East Sepik Province were complaining of bullying by WTK:

“They went to every household and family unit, forced them to write their names down on the forms. Only one week was given and they did it by force….Foreigners forced us to sign consent forms, then they destroyed our forest”.

They dominate the logging industry in Papua New Guinea (PNG) and the company has been accused of hiring police in West Pomio, New Britain Island to intimidate indigenous protesters. These communities say that the police were bankrolled by Rimbunan Hijau and have terrorised indigenous communities:

“The police have mistreated the locals by abusing them with sticks, fan belts, telling them to sit in the sun for five hours, swearing at them, arriving in the villages at night forcing them to sign papers with the people not understanding the content, tying their hands to their back, and commanding them to run in the hot sun.” 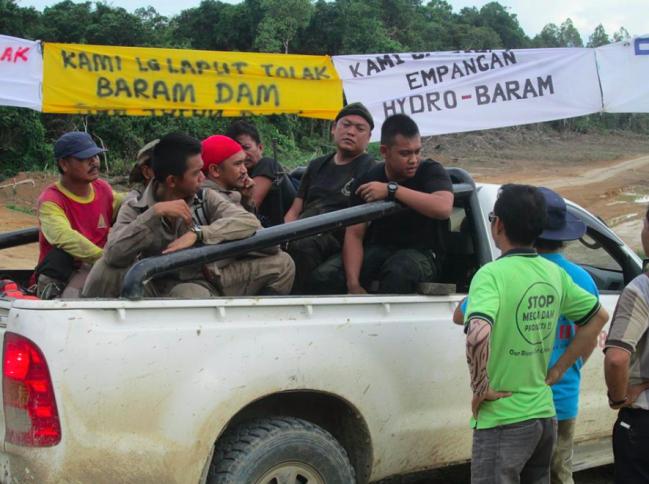 Riding into Baram – these thugs were snapped trying to intimidate the local blockaders. 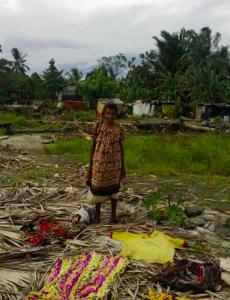 Lina Gawai from Bumbu, PNG stands where her home used to be before Rimbunan Hijau forcibly removed her community.

This is another tactic against natives that Sarawak’s timber tycoons learnt about first at home.

Thousands of indigenous people in Sarawak have been forcibly removed from their native lands to make way for giant hydroelectric dam projects, which ultimately financially benefit Taib Mahmud, his family and cronies.

Just this week, SUHAKAM visited indigenous communities who have been resettled in Murum and highlighted the unacceptable conditions that they have been left with.

Many natives displaced by the Bakun Dam have built floating homes on the side of the river as they are unhappy with their resettlement conditions. Most communities have complained of unfair compensation packages, or are still waiting for compensation.

Likewise, in April of this year, Rimbunan Hijau came under international scrutiny for forcibly removing indigenous communities in Bumbu Settlement in Lae, PNG.

These communities are now living in tents after being moved from the land they have been living off for the past 40-50 years. A court case is currently underway against Rimbunan Hijau and PNG Forest Products.  According to local organisation ACT NOW, one female villager stated that:

“They treated us like animals and we know our human rights have been violated to a great extent”.

It is certainly an attitude that rings familiar to the rural people of Sarawak. 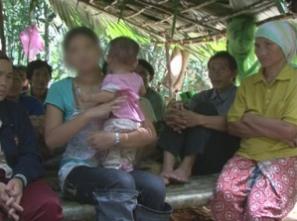 There have long been reports of systematic rape and abuse by loggers against indigenous women in Sarawak, but the Government have refused to take action to protect them or conduct a proper investigation.

In a BBC interview in 2009 BN MP James Masing even stated that the Penan are ” very good story tellers”.

Sarawak’s logging companies have shown identical lack of concern elsewhere in the world.

WTK own the one supermarket in town, the hotel, gaming machines and the sawmill. They control the shipping and fuel, whilst Rimbunan Hijau own one of the only two national newspapers. 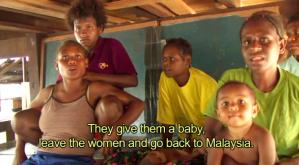 According to the report, many young women are forced into prostituting themselves to the Malaysian loggers to survive and that many cannot afford to send their children to school.

“Some children go to school, some don’t have school fees so they stay back in the house. If our fathers don’t work or get enough hours there is no money so the children don’t go to school, and there is no food. Education is very bad because of this.”

“Some of them [the loggers’] give money. They give money to some young girls to bribe them just to sleep with them. They give them a baby, leave the women and go back to Malaysia.”

We say that it is time the world woke up to the Sarawak logging menace and the huge capital base that has propelled it into these communities.  Even the forests of Australia, the wilderness of Tasmania have proved easy prey for the familiar tactics of the clear cutting Malaysians.

Hamed Sepawi, Taib’s cousin and business proxy, has ingratiated his way into the political life of the state and caused outrage through a series of questionable deals that have permitted his company Ta Ann to destroy huge areas of forest marked for protection.

The game is corruption and the consequences of greed are always ugly.