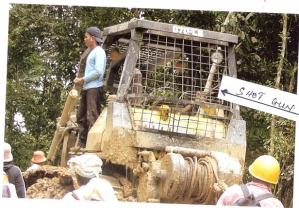 The logging worker is equipped with a home made gun

Sarawak Report can now present the proof behind widespread complaints that so-called ‘gangsters’ and ‘thugs’ are habitually used by logging companies to enforce the controversial licences handed to them in native lands by Chief Minister Abdul Taib Mahmud.

We have been passed concrete video evidence from an incident last week that shows a logging company worker threatening village blockaders with a large gun.  The villagers from Geran Stumbin, Sri Aman say that the employee of the company Sentiasa Maju Sdn Bhd waved the gun and threatened that “the company has many gangsters they can deploy”.  It was a clear warning to the longhouse folk, who were trying to protect their hundred year old fruit and rubber trees.

This evidence confirms the numerous stories of such intimidation across Sarawak for years.  Tales of frightening gangsters, who do the dirty work for the logging companies and the BN Government of Taib Mahmud, can be heard in every community.  They range round the logging and palm oil concessions and their function is to intimidate the local people and stop their protests against the removal and destruction of their lands.  Now a worker for Sentiasa Maju is on record for threatening to “deploy” them against the Iban longhouse communities of Geran Stumbin.

Technology starts to shed light on dirty deeds in the jungle

Till now the indigenous land owners have nowhere to turn to for protection against the violent bullies.  Fear has stalked the state of Sarawak and protest has been regarded as extremely dangerous and hopeless.  Notoriously, the police turn a blind eye to the problem and rarely investigate complaints of intimidation.  This is because they know full well that ‘The Boss’ or ‘CEO of Sarawak’, as cronies call him, wants the natives off the land so he can ‘develop’ it.  The police chiefs are known to have cosy contacts with the rich logging company managers. 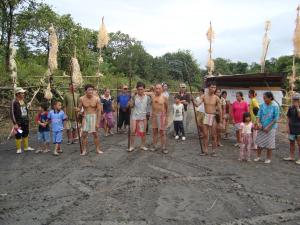 So, the natives have been helpless and without evidence for years.  Taib has been able to sit in his grand office in the Pelita Building in Kuching, sharing out their lands to his family and associates, while pretending that these are ‘joint partnerships’ with the locals for ‘progress and development’.  Yet, while he has mixed business with politics, his logging partners’ thugs have shut up any protests in the jungle by whatever means.

Our proof now raises questions about a number of cases of suspicious disappearances.  What did happen to the troublesome headman Kelsau Naan, a key blockade leader, who disappeared in October 2007 and was then was found dead in the jungle?  His family have always maintained he was murdered, but the case has never been satisfactorily investigated.

Likewise, what chance did the poverty-stricken native owners of the land have, trapped in their villages and without a voice?   This is why genuine progress and development has always been the LAST thing Taib has ever really wanted.  Only he, his family and a few selected logging tycoons and cronies have got rich from the proceeds of the Native Customary Rights Lands.

However, technology is changing the balance of power.  It is even starting to penetrate the shades of Sarawak’s fast receding jungle.  On this occasion one of the village people had a mobile phone with a recorder function.  The chip had a limited space and his recording of the incident soon cut out.  But the recording provides vivid and undeniable proof of the villagers’ story that criminal violence was threatened by the logging company.

What will the Chief of Police say about this incident when the lawyers of the office of the PKR opposition leader Baru Bian take this matter to court on behalf of the natives of Geran Stumbin?  So far the local police have taken note of the complaint by the villagers but as usual have done nothing further.  The gun-wielding criminal is still at large. 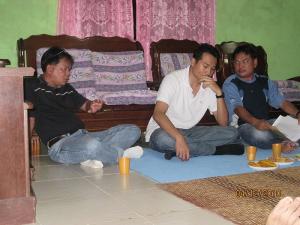 Finally the police arrive, but only because they want to interrogate not help!!

In fact the villagers have made numerous complaints about the encroachments on their lands to the police, but the only action that has been taken was when the company complained about about a missing key to one of their vehicles.  This brought the police to the village at last, but only to interrogate the locals about this event!

Presumably the logging company will now fire their worker and then pretend that this was an ‘isolated and unusual incident’.  In which case they had better pay him off well and intimidate him badly also, because otherwise Sarawak Report or a rival outlet will be chasing him for his story!

With evidence like this Taib cannot continue to maintain his facade of benign development.  It has always been theft –  and violent theft at that.  Taib will continue to ignore the growing clamour of complaints and pretend all is well.  But now everything is in the open.  He is being seen for what he is and he will be judged on the evidence that is at last finding it way out into the open and not the lies he has put out.

One final question to Taib Mahmud (for now)

Taib Mahmud in his capacities as Chief Minister and Minister of Resources and Planning and also, of course, the active Chairman of the Land Custody and Development Authority (Pelita), was responsible for issuing the licence to Sentiasa Maju Sdn Bhd.

Yet the shareholders of this company remain a mystery.  Although the company was set up in 1980, just a few months before Taib took office, the company register announces that it is yet to receive any information about who owns it!

So on what judgement did Taib Mahmud come to the decision that this would be a suitable company for the Government of Sarawak to issue a Timber Licence to?  Does he know who it is or was it just one of those ‘business opportunities’ referred to in a recent interview by his side-kick Karim Hamza?  Given the growing evidence of staggeringly self-serving decisions in the handing out of licences, it is inevitable that many people will be left assuming that the company belongs to him.  Perhaps the Chief Minister could enlighten us and put such assumptions to rest?  Or must it remain yet another of Sarawak’s ‘State Secrets’ when it comes to the distribution of land?