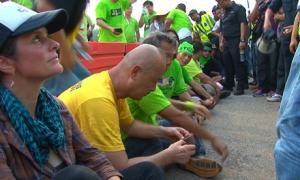 The on-going arbitrary detention of the Australian Natalie Lowrey has brought a sinister new meaning to Malaysia’s top advertising slogan.

The jingle was supposed to tempt tourists from across the world with visions of Asian hospitality and friendliness, but now Natalie has experienced the other side of the coin.

As the only remaining person still locked up out of the 15 originally arrested for making a peaceful protest outside the Lynas rare earth processing plant, the Australian is facing discrimination by the Malaysian police.

Now they are pressing charges against her alone, which could result in a two year prison sentence in a notorious Malaysian jail.

For an Australian woman the conditions in such a place will be shockingly unhygienic, as Malaysians themselves fruitlessly complain, and her immune system will not be adapted to cope with the local diseases.  Neither will she be prepared for the way certain uniformed Malaysians are ready to treat ‘underlings’, since she comes from an egalitarian country where even prisoners have rights.

[UPDATE – Lowry was released on police bail on Friday night, some hours after the original publication of this article]

Natalie’s fate and her on-going experiences in a Malaysian jail will certainly bring a new meaning to this slogan “Malaysia truly Asia” to potential visitors, who are being encouraged to consider the country as a relaxing holiday destination where they can expect royal hospitality!

Should they arrive safely in the first place (using Malaysia Airlines) they now know they will have to tread carefully and ‘not to upset the authorities’, because if they do they will be singled out over the local people for prosecution and punishment.

This is the promotional image – how about the reality?

In a statement today the human rights group Suaram condemned the instruments being used to keep Natalie in detention where local people have been released.

Natalie has been discriminated against because she is a ‘foreigner’ under new laws which treat the rights of foreigners beneath the rights of local people in contravention of the Universal Declaration of Human Rights.

She is being prejudiced against, using laws designed to control illegal immigrants in a flagrant abuse of power, according to the NGO.  She has also been caught up, of course, in the stringent new laws to prevent any kind of unauthorised assembly or protest in this so-called democratic country:

We wish to remind the government and the police that the right to freedom of expression and freedom of peaceful assembly are universal human rights and are recognised in the Universal Declaration of Human Rights, to which Malaysia has also endorsed. These rights cannot be nullified merely on the ground that Natalie Lowrey is a foreigner as this is in contravention with international human rights law.

The Peaceful Assembly Act 2012, which bans foreigners from organizing or participating in peaceful assembly, should be abolished or amended in accordance with international human rights standards

Well that is enough to put off any visitor to Malaysia, isn’t it?

Find yourself caught up in a street demonstration, whilst shopping at the local market and that’s you gone for two weeks, arrested without charge. 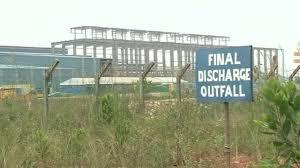 Local Malaysians were justified in questioning why the Australian company decided to locate here rather than their own outback…..

In fact, Natalie knew what she was doing when she peacefully joined what ought, in a civilised country, have been classed as a legitimate protest against an Australian-owned factory that is widely suspected of polluting the environment and damaging local human health.

Natalie was concerned that her native company had chosen to locate their controversial operation in a country where the forces of law and order don’t tolerate public protests like they do back home and where a factory which processes dangerous substances can get its licences to build in less than a month.

There are not many foreign visitors to Malaysia who would not sympathise with Natalie’s honourable concerns. She was seated when she was arrested, on a rock at the side of the road. 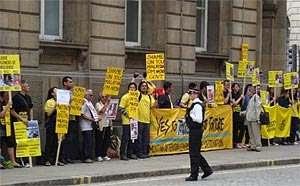 Police monitoring the Bersih marchers in London – and protecting them from the traffic!

In stark contrast with Natalie’s prejudiced treatment, large crowds of Malaysians are regularly tolerated conducting their own noisy protests in London and Australia, without so much as a rude word from the local police.

They are allowed to go marching through the streets, waving placards and shouting through mega-phones, without anyone being arrested or harassed by the authorities in these host countries.

The police attend to make sure nothing gets out of hand and nobody steps into a dangerous place in the road either.

But, there has been no intimidation and no arrests.  The only harassment such demonstrators have ever received in these host countries around the world have come from their own Malaysian embassies, who regularly threaten their own citizens abroad not to ‘go against’ the BN government.

This is because the right of protest is a human right and Malaysia clearly needs to be reminded that their country too has signed up to the provisions of that basic declaration.

So is the true meaning of “Truly Asia” that in Malaysia the authorities do what they like to their visitors and treat them with dangerous and arbitrary lack of concern for their human rights?

What has happened to Natalie proves yes.

A few days ago the Prime Minister of Malaysia urged his UMNO party members to be ‘as brave‘ as the Isis militants, the terrorist storm troopers currently causing a terrifying break down of law and order in the Middle East.

It was a shocking sentiment for Najib Razak to express and a sobering reflection of what is going on in the country, sanctioned from the very top. 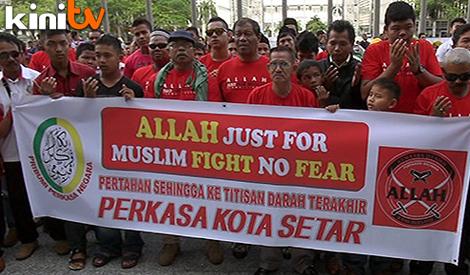 The detention of Natalie Lowrey has highlighted the crumbling of the law and order situation in Malaysia still further.

A country which formerly had strong institutions to be largely very proud of, in terms of a level headed and orderly police force and justice system, is now a mass of confusion when it comes to basic good governance.

This is because the present administration under a faltering BN has unleashed a whole series of competing power-brokers and law enforcers, in the form of religious bigots and ‘Malay supremacists’, who are attempting to assert their own power structures and Sharia laws over and above the civil courts and institutions.

These often self-appointed groups are being secretly financed by BN, who are opportunistically attempting to use them to stir up racism and hatred against political opponents and to thuggishly intimidate the opposition in ways they could not do openly.

There is a worrying analogy in Hitler: the likes of Perkasa and ISMA are Najib’s Brownshirts.  They are secretly being paid to do his dirty work against the parties who won a majority against him at the last election.

RM tens of millions paid out to ISMA

Sarawak Report has received extremely well-sourced information that the extremist group ISMA has received significant funding of tens of millions of ringgit directly from the Prime Minister’s office.

Perkasa has already admitted to such government funding and we call on ISMA and the government to confirm or deny our information that ISMA has received millions in the same manner.

Indeed, how else would such groups be able to suddenly start globe-trotting and organising themselves outside of a normal working life if they were not being supported in such a way?

Malaysia has signed up to the Universal Declaration on Human Rights, but increasingly, as it plunges into confusion and government backed thuggery, these rights for individuals are being ignored and abuses are being sanctioned at the very highest level.

Women have been snatched from their wedding ceremonies, bodies from their funerals, children from their mothers, Bibles from their owners – all in the name of religious ‘correctness’.

And, the treatment of a foreigner Natalie Lowery has now provided just one more prominent example of the injustices that ordinary Malaysians are starting to have to endure on a daily basis, as this insecure and ruthless administration embarks on lashing out at any group or individual that it sees as a threat to its eternal right to govern.

Najib Razak could not have advertised the true under-belly of the slogan ‘Malaysia Truly Asia” to the world in a more effective way.