The so-called Ministry for Entrepreneur Development And Co-operatives (MEDAC) set up by the PH government in 2018 saw some brutal management changes shortly after the backdoor coup was staged early last year.

MEDAC last year received a budget of some RM320 million, all of which was purportedly spent on deserving local entrepreneurs. However, certain insiders have described the ministry as a nice source of ‘easy money’ for well-connected individuals who know how to work the system to obtain substantial grants from public money. “Politicians leverage their opportunities and get friends to go and ask for grants” opines one such disenchanted source.

Following the management changes Sarawak Report has received evidence of complaints made over alleged irregular and conflicted payments granted to entities connected to the people now in charge.

One such payout exceeded the maximum amount of RM500,000 allowed to the same recipient via three separate grants to companies owned by none other than the siblings of the new CEO, according to complaints made to the MACC. The matter was reported several months ago Sarawak Report has learnt, but so far no action has apparently been taken.

Another complaint involves a payment of RM338,950 to a company owned by the political secretary to the new minister in charge, where irregularities have been identified according to complaints viewed by Sarawak Report.

The new minister brought in to head MEDAC by the PN government is the Sarawak Santubong PBB (GPS) MP, Wan Junaidi – just one of the army of political ‘frogs’ to receive a ministerial post as a reward for hopping over to the new government coalition set up by the Agong’s chosen appointee, Mahiaddin Yassin.

Junaidi brought with him as his political secretary, his own nephew Syed Hamzah Syed Paie, and shortly after taking office the pair were apparently affecting some highly controversial changes of top personnel in the department. In particular, there was the sudden and unexplained sacking of the CEO of the Small & Medium Enterprise Corporation (SME Corp) Noor Azmi Mat Said.

Noor Azmi was an experienced businessman, considered as an independent professional with a long track record, who had been contracted by Junaidi’s PH predecessor Redzuan Md Yusof to bring a guiding hand to the distribution of government money to promote the sector. His annual contract had been previously renewed and no grounds for dismissal had been discovered.

However, one Sunday in July of last year the Chairman of the SME, Syed Hussien Al-Habshee, is understood to have conducted an unscheduled ‘informal’ board meeting to discuss the CEO’s removal. Despite the breach of protocol and despite the proposal being short of a majority, the minister Wan Junaidi nevertheless signed off  the ‘Board Decision’ to remove Azmi with just 24 hours notice the very next day.

In his place Wan Junaidi next signed up the appointment of Azmi’s deputy, one Rizal Nainy who had originally been seconded to the agency from Pemandu and offered a permanent post in 2018. According to documents viewed by Sarawak Report, management staff from the Human Resources department and also the Secretary General to the ministry itself pointed out that both the sacking and the new permanent appointment constituted irregularities and broke protocol, not least because Rizal had yet to serve the required time as a member of staff (three years) to be appointed permanently to the CEO post.

With Wan Junaidi’s implicit approval the chairman over-ruled such protests, conducting a later emergency meeting of the board in August where members were pressed to confirm Azmi’s removal. Meanwhile, a number of the senior management who had contested the irregularities found themselves also removed from post, including the head of Human Resources and the Secretary General himself.

Part of the backdrop to this toxic development appears to have been a dispute between Rizal Nainy and Noor Azmi over the transfer of RM20 million out of the agency into what was termed as an “SME Partner” in the private sector – apparently as part of a programme to delegate the distribution of grants to third parties outside of the ministry.

Rizal had authorised the removal of the cash in his capacity as acting CEO of SME Corp, however the transfer had apparently taken place shortly after Noor Azmi was appointed to be his boss and the new CEO had queried why had was not consulted. As a result of the contention the funds remained apparently unused during Azmi’s tenure under the auspices of this third party partner, Warisan Quantum Management.

However, it is certain grants that were revealed after the departure of Noor Azmi that have apparently been raising eyebrows among departmental workers, given what would appear to be brazen conflicts of interest in favour of the newly appointed hierarchy. 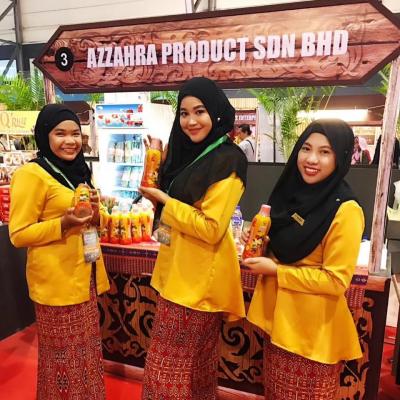 For example, explains an inside source, the MACC were informed that a total of RM600,000 in so called Bumiputera Enterprise Enhancement Programme (BEEP) grants had been approved to three companies owned by none other than the new CEO Rizal’s siblings and family members during the period he was in a management position.

In another case, also detailed by whistleblower complaints, the company Azzahra Product Sdn Bhd, directed by the wife of Junaidi’s political secretary Syed Hamzah (featured in main picture) had also succeeded in a RM338,950 grant application. The majority of the shares in the company are owned by Syed himself.

As part of the supported project Azzahra Product then obtained services (manufacturing plant) from another company owned by a family member, namely Syed Hamzah’s own brother, which is a contravention of rules designed to prevent graft.

Easy Cash For Those Who Can Work The System?

Kuching based Azzahra Product Sdn Bhd, first put in for its so called BEEP (Bumiputera Enterprise Enhancement Programme) grant from SME Corp in 2017 under the previous BN government, so before Syed Hamzah was directly linked to the department.

At that time MEDEC was run by yet another Sarawakian minister however, Wan Junaidi’s close political colleague at PBB, Naroden Majais,.  As Junaidi’s nephew and political secretary Syed Hamzah Syed Paie had resigned as director of Azzahra, but he remained* the dominant shareholder and his wife is a director and the other shareholder. 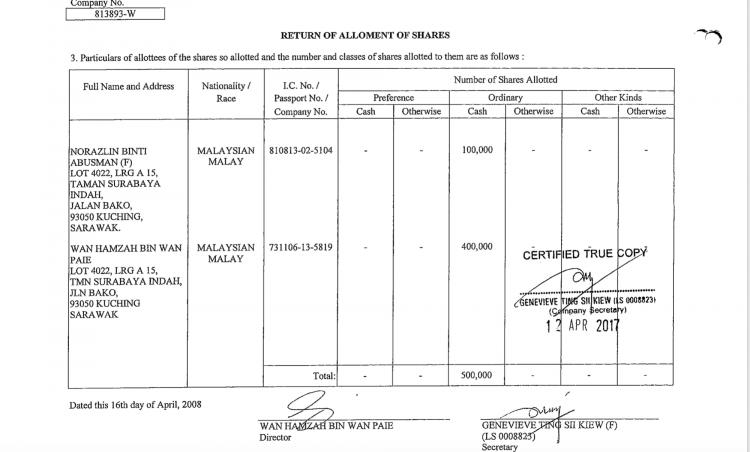 The grant was finally processed in late 2019 just before the backdoor coup and the return of the ministry under the control of a PBB politician, this time Syed Hamzah’s own boss.

At issue is the fact that the supplier of the juice making equipment cited as the reason for the hefty RM338,950 BEEP grant to this politically connected company was another concern owned by none other than Syed Hamzah’s elder brother and younger sister, which for obvious reasons represents a flagrant breach of the rules: 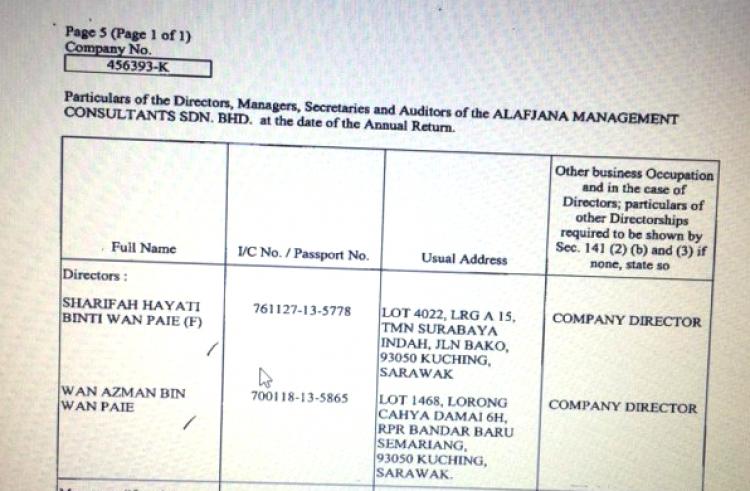 It was Syed Hamzah’s brother, Wan Azman, who signed the invoice to Azzahra for the machinery on behalf of the related company Alafjana Management Consultants Sdn Bhd, charging a hefty total of RM499,000 to justify the lion’s share of the SME grant money. 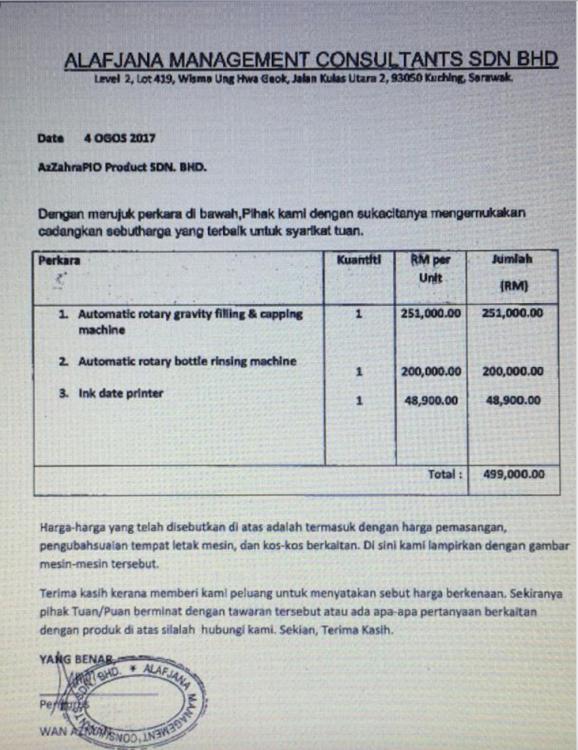 “There is a clear rule against purchasing products from related parties using SME grant money. It is too easy to inflate prices when there is such conflict of interest”

one source has confirmed to Sarawak Report. 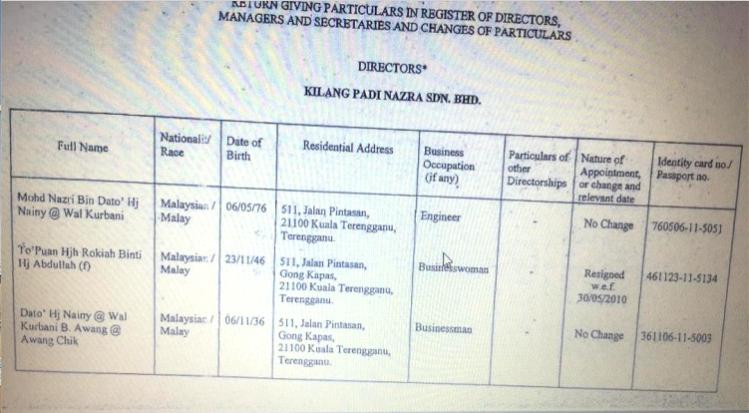 Company controlled by a sibling of the CEO 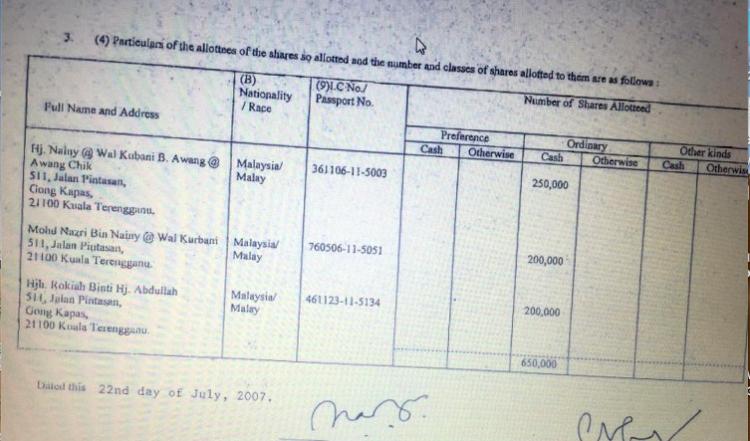 A second company N-inspirasi Sdn Bhd is also owned by the same brother, while a third company Nazra Ukir Sdn Bhd is owned by Rizal’s elder sister and younger brother.

According to Nainy’s own LinkedIn CV this was all at a time when he exercised significant influence as the number two administrator at the agency. He joined the SME as Deputy CEO in June 2016 in charge of “strategising and streamlining SMD development programmes… coordination of SME programmes, SME Masterplan and SMEIPA agenda; and providing business advisory support to SMEs which will ultimately increase Malaysia’s GDP, exports and job creation.”

The complaints registered with the MACC against these grants cite conflict of interest and the fact they together exceed the RM500,000 permitted per entity (companies owned by Rizal’s brother alone received RM641,626 in the same month). 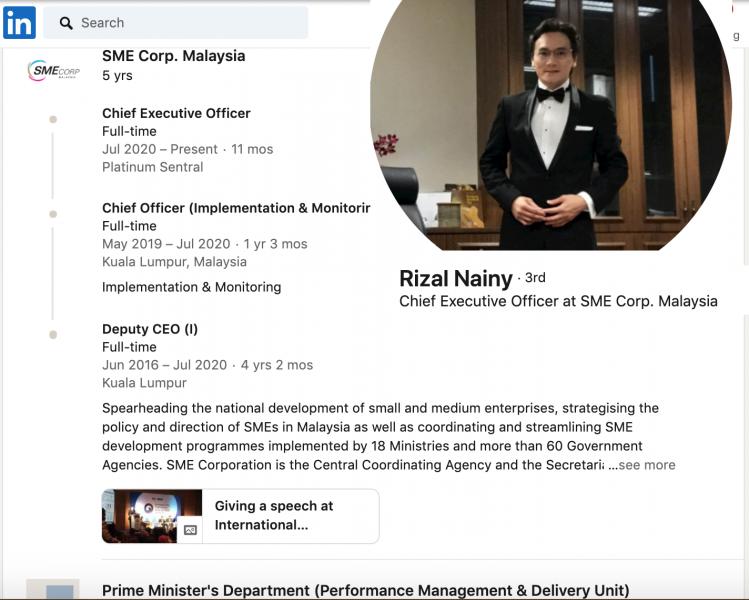 Responding to questions posed by Sarawak Report Rizal last night acknowledged the grants and that he was aware of the complaints but denied accusations of irregularities, saying the awards were ‘true to procedure’ and ‘neutral':

There were grants awarded to companies owned by my family members, whereby processing of the BEEP grants were handled true to procedure and professionally. Approving of grants were also done through neutral approval committees.
I am also aware that there were complaints lodged and these alleged complaints were also investigated by the relevant Government bodies.”

With regards to such investigations the CEO concluded that he was open to engage on the matter and is “confident [he] did nothing wrong”.

Critics however see such considerable handouts as evidence of how millions distributed from public funds are more available to connected individuals than genuine enterprises designed to jump start the economy and create jobs. 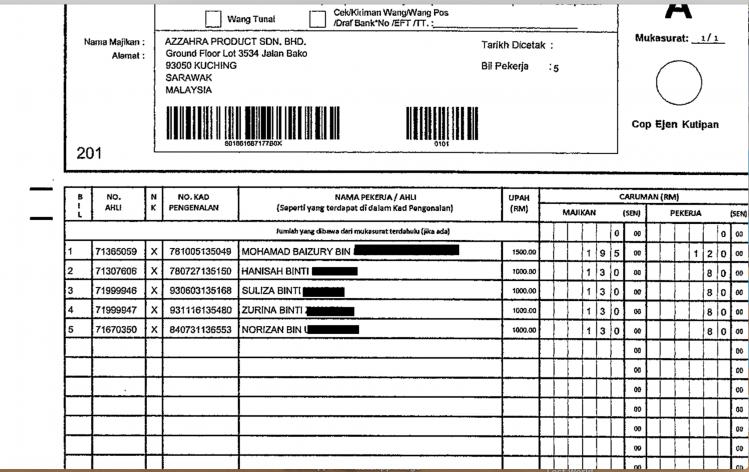 Syed Hamzah has not yet immediately replied to our queries about the grants to his company.

Meanwhile, given the millions that pass through the ministry now controlled by Rizal and Wan Junaidi, it has to be feared that with complaints of apparent abuses such as these having been met with no action for nearly a year there is by now a potential further can of worms to be unearthed given the culture of graft that has been the hallmark of this PN government.

So much for supporting the small and medium sized businesses in Malaysia, when so much of the money has drifted once more into the clutches of those related to the politicians and executives entrusted to run Malaysia.

*update: According to current company documents Syed Hamzah ceded all shares in the company in June 2020, however documents submitted at the relevant time the grant was awarded in 2017 cite himself and his wife as the shareholders.