Yesterday Sarawak Report reported queries raised about the value and probity of so-called small business grants made to political cronies and connected individuals through the so-called Small and Medium Enterprises Corporation (SME Corp).

Despite the crisis of the pandemic and Malaysia’s plummeting public finances the backdoor coup government has recently seen fit to raise the SME budget by some 50% thus ensuring even greater funds for similar projects, which exasperated insiders tell Sarawak Report are often waved through if presented from the ‘right Bumiputera quarters’.

“Any Tom, Dick and Harry can come and apply for funding. All you need to have is an existing outfit that is operational, your financial track record and a proposal.
It all depends on the person in charge and who they are dealing with.”

explained one exasperated source. Information on grant approvals and its recipients is kept strictly confidential by the department, making it generally impossible for any form of public scrutiny to demonstrate where these grants of public money are being directed or how useful to the public interest they might turn out to be.

Nevertheless, it would appear that with one project cited in our earlier report thanks to leaked information about a complaint to the MACC, SME Corp may have scored a success by subsidising a product with the potential (or so it claims) to save Malaysian lives … if they can afford the price tag and were the claims to be proven true. 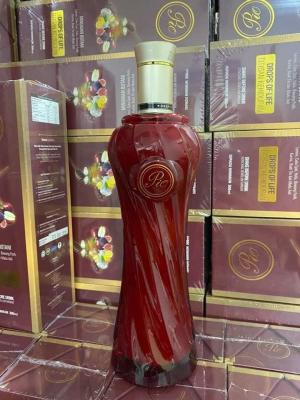 RM99 for half a litre of the alleged elixir

‘PIO Juice’ is marketed as a health drink but packaged and promoted like a luxury beauty product at a cost of RM99 per half litre.

Kuching based Azzahra Products is owned by the family of Syed Hamzah*, the political secretary to Wan Junaidi who is the Minister in charge of SME Corp. The company is directed by Syed’s glamour conscious wife.

According to Facebook posts the couple live in considerable luxury in their largely impoverished state and have recently travelled extensively to all four corners of the earth (posing at the business class counters of airports with their family in tow).

A grant of RM338,950 was nonetheless proffered to the couple (despite the political secretary’s government salary at the time) to enable them to buy equipment to make their juice product. 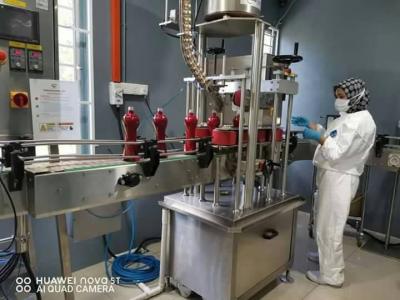 The couple chose to buy the equipment (which appears staggeringly expensive for what appears to be a rudimentary pulping and sieving device according to promotional pics) from Syed Hamzah’s own brother and sister, which disgruntled complainants have pointed out is strictly contrary to rules.

The total invoice made out to the political secretary by his own family members was just under half a million ringgit.

So far the complaints about this and other handouts by SME Corp have yet to be acted upon by the MACC according to the information available to Sarawak Report. Meanwhile, the production of the Azzahra Product has indeed powered ahead, however plainly not for the mass market. 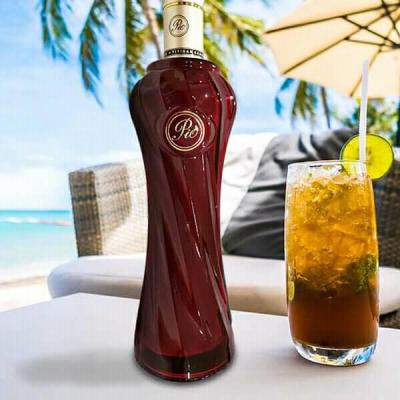 Perfect for a yacht holiday

The company’s Facebook site details with extensive pictures the promotion of the juice drink as not only a prestige luxury product, with the half litre bottles packaged in individual gift boxes with matching carrier bags at outlets such as airports, but also claims stunning medicinal qualities. 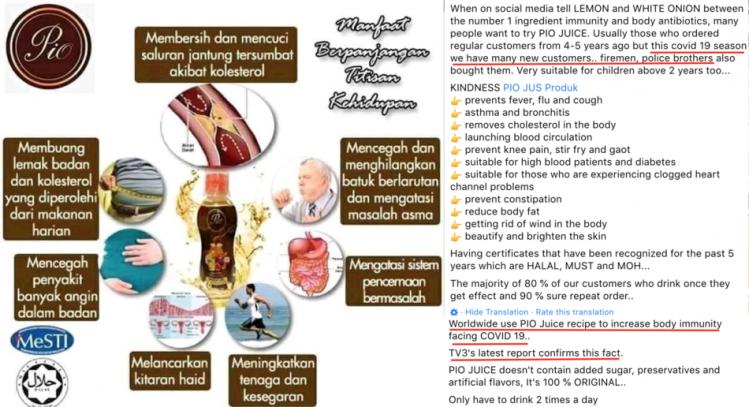 Repeated advertising includes claims that the PIO drink combats not only a multitude of modern lifestyle diseases but also can prevent the body succumbing to Covid 19. People “worldwide” are taking the medicament to ward off the virus one post by the company claims as “confirmed” by TV3, boasts one post dated 24th March of last year. 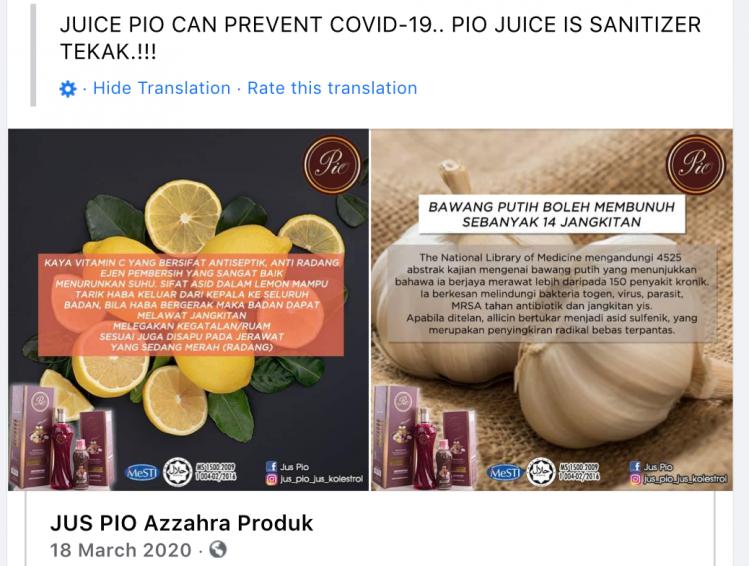 Several other posts amplify these claims whilst in some cases appearing to stoke fears about the danger of not warding one’s immune system against the deadly virus by imbibing the medicinal properties of PIO juice. 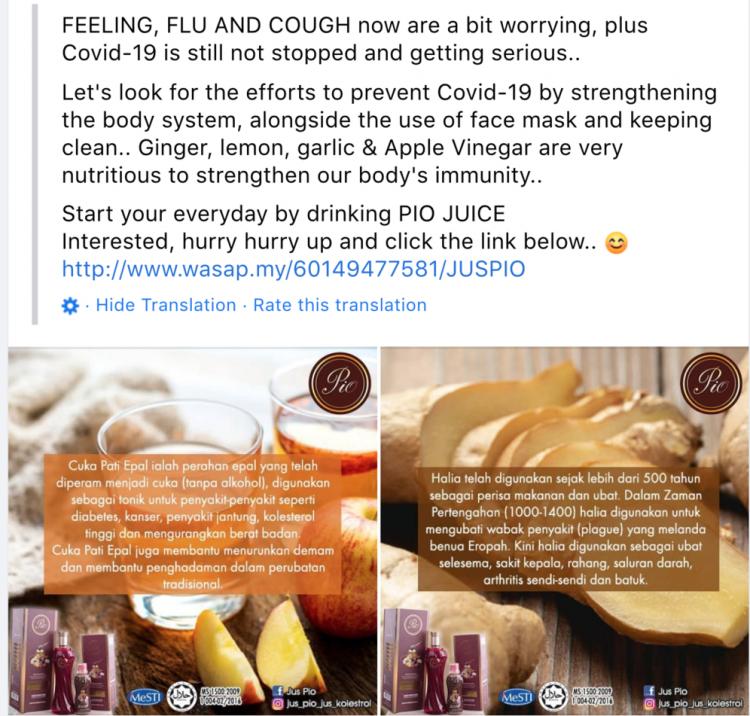 A risk not to take?

The basis for such claims appear to be ingredients which include everyday items such as garlic, lemon, ginger, apples and also honey which the ads claim are included in the drink to make a brew that is ‘100% original with no added sugar, preservatives or artificial flavours’. The ads primarily refer to the widely known benefits of Vitamin C that can also be cheaply obtained from from market fruit and vegetables. 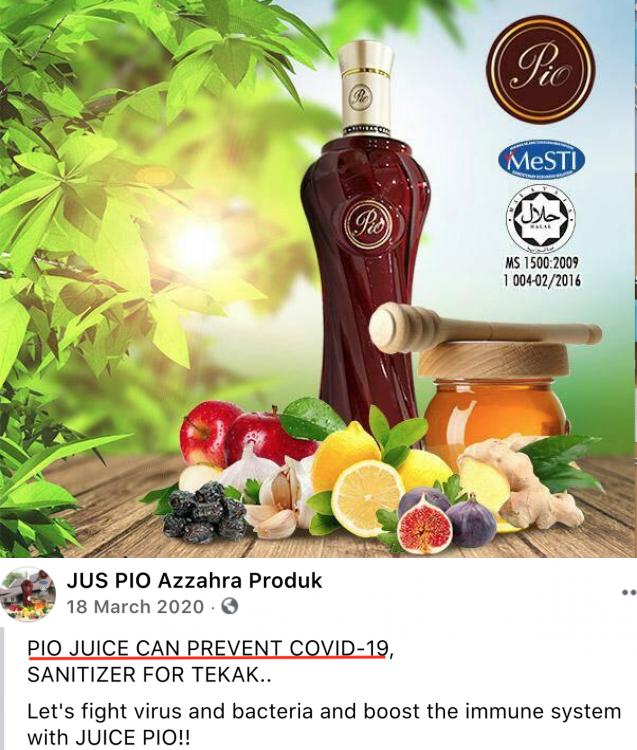 A claim too far?

Sarawak Report suggests that such claims are misleading and exaggerated. A quick scan of credible medical sources on the internet can confirm that whilst modest regular intake of Vitamin C is of course a vital part of any diet (more than an orange a day is excreted from the body anyway) it is in no way considered effective in warding off the deadly Coronavirus.

It would appear that the sellers of this government subsidised product are trading on fear for profit and making unsubstantiated medical claims all of which might well be of interest to Malaysia’s regulatory body the Medicines Advertisements Board.

According to the Rakyat Post’s review of the restrictions on false medical advertising the Department of Health has issued a “list of health conditions and diseases that no food, medicine, device or service can advertise to supposedly fix”. These include diabetes and heart disease which PIO juice claims to help combat.

Any product that advertises health benefits must be registered and there is a number to ring if there are concerns about the product the article explains.

It may well be that Azzahra Products have already received some challenge to their claims about the juice, given that on March 22nd last year it issued a statement of apology confirming the drink does not cure Covid 19, whilst continuing to claim that it helps prevent it. 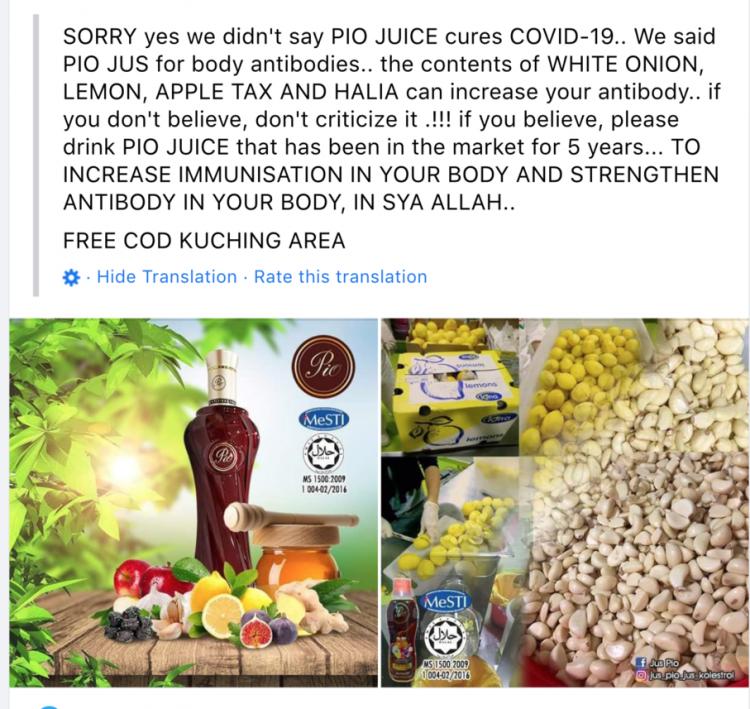 Whilst not seeking to criticise, when it comes to preventing Covid 19 vaccines are now available on the market for RM10 per person. It might seem therefore that the thousands poured into the production of this prestige potion might have been better spent on immunising 40,000 Sarawakians rather than further enriching this politically connected couple.

* updated: the shares in the company were transferred according to company records in June last year, apparently to a family member who also took over as director. Syed Hamzah has stated his interest ended in the company in November 2015, however company records show he continued to be majority shareholder till 13th April 2017, the day after the submission of papers for the BEEP grant which cited himself as the majority shareholder and his wife as the director. She continued as director till June last year which is subsequent to the ads cited in this article. 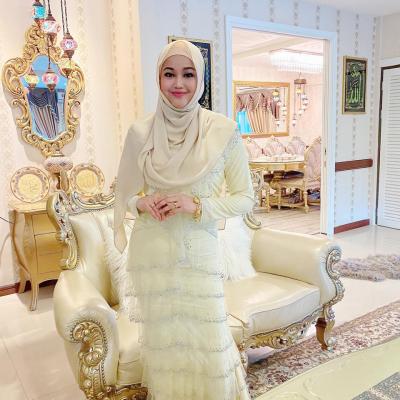 Norazlin binti Abusman, the company director wife of the political secretary poses in her Kuching home