The Malaysian Government, which owns 1MDB, can hardly complain at the guffaws of scepticism that greeted its latest attempt to close down a growing row about perceived misappropriations from settlements with the fund – by issuing a statement from the Board of Directors of that company.

“All proceeds from the 1MDB’s asset recovery efforts including any future settlements have been or will be deposited into the Trust Account” the statement read, adding that the company’s legal representatives “are remunerated based on a pre-agreed time cost, and not based on commission or a percentage of the value of settlements, or assets recovered.”

The move, which smacks of considerable desperation, was clearly designed to counter accusations that have led to a series of police reports and counter reports, by political representatives on the one hand and 1MDB’s private counsel on the other, over allegations that huge commissions are being siphoned out of the multi billion dollar settlements by the company to the ultimate benefit of the governing Bersatu’s election coffers.

This is exactly what happened during the original 1MDB scandal of course, under Najib Razak. And at that time several similar statements were issued by government controlled entities such as the very same 1MDB board, the then Attorney General and even the MACC to assure critics and the public at large that the fund’s accounts were fine and no money whatsoever had gone missing.

It is therefore fair to say that this method of reassurance is somewhat discredited in the eyes of the Malaysian public, as is the Board of Directors of 1MDB (although the personnel are changed).

Few will surely forget how previous members of the same 1MDB Board just days after the GE14 election admitted the company was broke after all, after having maintained a fiction on behalf of the previous Minister of Finance (Najib) and his government that all was well for several years.

Later the new Finance Minister quoted the same Datuk Kamal Mohd Ali as having admitted the 1MDB investments that were being purported as collateral for its debts were “scams”:

As much as RM9.8 billion worth of investment units parked abroad by 1Malaysia Development Berhad (1MDB) has been revealed to be nothing more than a “scam”, Finance Minister Lim Guan Eng said today.
He said 1MDB director Datuk Kamal Mohd Ali had told his ministry as much during a closed-door briefing earlier while relating a dispute between the board and the sovereign investment fund’s management….. [Malay Mail May 2018]

The personnel of the 1MDB board was changed under the PH government, which declared that going forward the administration of the fund would be conducted appropriately and transparently as every effort was made to recoup the stolen cash and gain proper recompense from those implicated in the fraud, including Goldman Sachs, IPIC, AmBank, Deloitte and others.

The reclaimed money would indeed all be deposited in an open Trust Account to repay debts, which was set up by the now deposed elected government. This is where the 1MDB Board claim the recent cash settlements have gone.

However, the elected government was pushed aside by the present coup coalition comprising many of the actors who orchestrated and allowed 1MDB to purloin the state to fill their party coffers over many years.

Moreover, the new members of the 1MDB Board are far from independent, being civil servants who work for the very Finance Ministry that owns the fund and which now stands accused of filching funds once more by disaffected members of their own coalition. 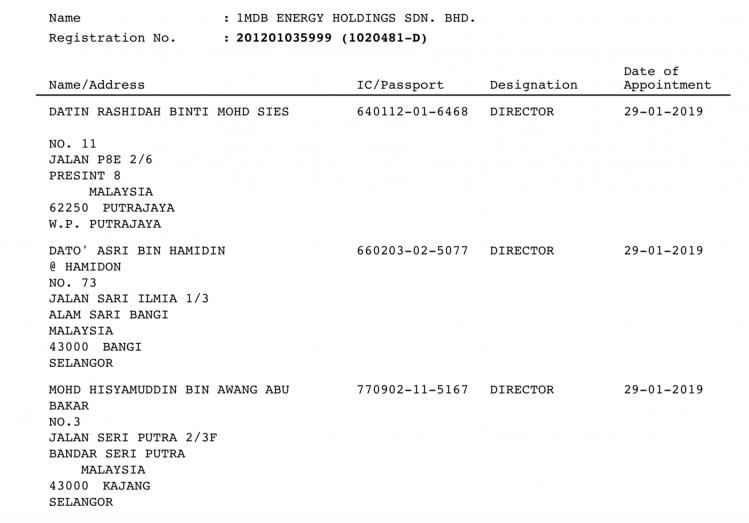 The names supposedly behind the statement by the 1MDB board

The critics include the former UMNO Supreme Council Member Lokman Adam, who claimed RM500 million was stolen from the Goldman Sachs settlement using bogus legal commissions as a guise, and an assemblyman Sallehudin Amiruddin who filed a police report.

Lawyer Rosli Dahlan, lead counsel for 1MDB (of whom more later), has filed his own police report against the pair citing the newly minted ‘Fake News’ law amongst others to shut his critics up on grounds of ‘malicious slander’.

Enter, stage left, the statement by the 1MDB board. How reassuring is it supposed to be? The Chairman of the Board is Dato Asri bin Hamden, a senior civil servant at the Ministry of Finance, effectively a top target of the allegations.

As the former 1MDB political sleuth who then under the previous Finance Minister set up the Trust Fund for reparations, Tony Pua, has subsequently commented why not just apply the transparency that was established at the start of the process by the previous government and allow a proper scrutiny of all the 1MDB settlements by bodies such as the Public Accounts Committee?

This, rather than statements by non-independent actors appointed to the Board would settle concerns reasons Pua, threatening that by ignoring such proper procedures the present ‘PM8′ is now himself headed down the same path as his predecessor and former boss Najib, currently in the dock over 1MDB!

Secrecy Demanded By Others!

However, the PN government insist they are bound by confidentiality clauses not of their own making but demanded by the parties with whom they are concluding their series of quick-fix settlements. It is this, they claim, that has forced them to throw a veil of secrecy over exactly what has happened to 1MDBs repatriated money.

Indeed, the PAS law minister Takiyuddin Hassan could not have been more specific at the time of the settlement with Goldman Sachs last year, stating that it was not the Malaysian side that wanted all the secrecy but rather the US bank who had insisted on a so-called Non Disclosure Agreement – thereby (according to Takiyuddin) forcing 1MDB to conceal its dealings from the prying eyes of the PAC!

This leaves some important questions to be asked of Goldman Sachs. Firstly, given these claims by Malaysia, did the bank disclose these alleged secrecy clauses to the SEC to whom it is obliged to report such a settlement and secondly how could such alleged secrecy over its negotiated commitments to 1MDB square with its plain obligations of transparency to shareholders?

And different questions arise for the Malaysian government. Namely, whatever the alleged secrecy clauses contained in the negotiations why would these affect transparency regarding the 1MDB side of the deal, namely to allow confirmation that the full amount agreed arrived in the trust account and whether fees were paid out of these reparations or any of the other settlements?

Given the baffling refusal of 1MDB to show its books, the odd excuse of Takiyuddin and the so far deafening silence of Goldman Sachs over the entire row thundering in Malaysia Sarawak Report suggests another more potentially reassuring party to approach for comment.

Time For PWC To Confirm the Claim By The Board

In a trumpeted move at the time, the PH government appointed the global accountancy firm PWC to act as the highly paid actual managers of 1MDB, under a management agreement put in place in 2018. The agreement means that the day to day running of 1MDB is in the hands of an Executive Committee chaired by one Mohammad Faiz Azmi:

The appointment of Datuk Mohammad Faiz Azmi as the chairman of the executive committee is part of the scope and services provided by PricewaterhouseCoopers Advisory Services Sdn Bhd (PwC) to 1Malaysia Development Bhd (1MDB).

Since Faiz Azmi is the Executive Chairman of Pricewaterhouse Cooper in Malaysia and is so intimately involved in the very process of recovering 1MDB’s assets and recovering its debt it is surely a statement from him that Malaysians should be looking for in support of the assurances of the Board?

As the only remaining firm out of the ‘big four’ not to be tarnished by any dirty dealings with 1MDB in the past, PWC certainly has a prized reputation for integrity that it will wish to keep sound. It is at this very moment processing the fine played by its rival Deloitte for failing in such duties.

So, rather than expecting Malaysian’s to rely on a statement from the appointed civil servants on the Board of 1MDB, let them hear confirmation from the accountancy firm PWC, thereby putting its reputation on the line to say that every single dollar of the $2.5 billion obtained from Goldman Sachs and the further settlements has been fully paid into the 1MDB Trust Fund and that no fees or commissions have been taken out of it.

PWC can then also stake its reputation on assuring that although the entire management and contents of the fund have now been unaccountably made secret by the PN government, their firm can assure the public and government critics that not a penny has been misappropriated.

This entire situation only goes towards the established maxim that you must not only do the right thing but be seen to be doing the right thing, which is why transparency matters and appearances of conflict of interest should be avoided in public business.

It is the failure to acknowledge this in the appointment of the independent counsel placed in charge of the 1MDB quick-fix settlement programme shortly after PN seized office that lies at the heart of so much mistrust.

Mr Rosli Dahlan has furiously protested at accusations that he is known to be close to PM Muhyiddin and is therefore believed to have been appointed to take over the 1MDB negotiations for that reason.

However, as cited in the recent book by former AG Tommy Thomas, his close relationship to the Bersatu power broker has been so well known it even marked him out as a candidate for AG in 2018. Rosli has denied he coverts the role in his police report.

Yet his longstanding role as the personal lawyer to the present prime minister, emerging as his legal supporter shortly after Muhyiddin was fired as deputy prime minister by Najib, does not sit easily with his swift appointment as 1MDB’s chief negotiator almost the moment ‘PM8′ took office. The appointment was not scrutinised as Parliament was not sitting.

Rosli, exited his previous law firm and set up his own partnership just weeks before the so-called Sheraton move which formed the culmination of weeks of plotting to upturn the Harapan government thanks to defections such as those of Muhyiddin himself. He continues to represent the prime minister in private cases, such as suits for libel, whilst at the same time acting in his high profile role for 1MDB as outside counsel, leading on bringing settlements to a close as soon as possible.

Without doubt there are few individuals that PM Muhyiddin trusts more than this legal eagle. However, in consequence, how much trust can others feel in his independence in that role?