Are The PetroSaudi Boys The Next In Line For A Generous Settlement From KL?

A series of new developments have upturned the situation with respect to $340 million dollars obtained by the Saudi company PetroSaudi from 1MDB, that was recently frozen in London.

A US Department Of Justice case to seize the cash collapsed some days ago in California and Sarawak Report now understands US prosecutors will not move to reverse the adverse judgement.

Meanwhile, the PN negotiators who are also after the money are believed to be following their pattern of cutting deals that could now leave PetroSaudi with a sizeable share of the cash after all.

In which case the shareholder of that company, Tarek Obaid, and his associates may be able to continue living the high life of their choice (reportedly quaffing champagne and other substances together with hired escorts at expensive venues) courtesy of the purloined Malaysian development fund. 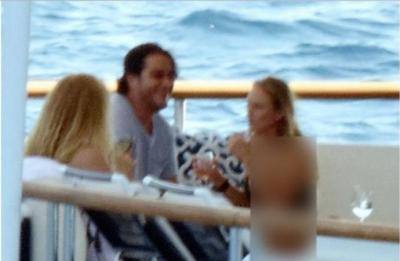 Weeks ago all had seemed lost for the fraudsters on the financial front. In response to an application by Britain’s National Crime Agency (itself acting on the asset seizure application by the DOJ) their London law firm Clyde & Co was ordered not to release the $340 million sitting in its client account.

This was money PetroSaudi had painstakingly extracted through a series of court actions from Venezuela, where it had invested millions obtained from 1MDB in return for fraudulently posing as its ‘joint venture partner’.

Meanwhile, Malaysia had also made a move on the money having filed an application in July on the basis that it was the proceeds of the theft of 1MDB’s borrowed cash.

Most speculated that this was probably the end of the road for remaining shareholder Obaid and his collaborators (including his key advisor the UK national Patrick Mahony who received millions from the theft).

However, the company had thrown 1MDB’s millions at defensive legal action and, taking into account the biddable nature PN’s cash hungry drive for swift secret settlements, things may be looking up once more for the chancers (who had started out with barely enough to make ends meet before 1MDB poured $1.803 million into an alleged venture involving a Caspian Sea oil well that PetroSaudi falsely claimed to own).

The first legal success for PetroSaudi had involved getting their money out of Venezuela which had prosecuted the company for fraud in bribing officials to sign up to a hugely disadvantageous drilling contact that paid the company half a million dollars every day, even though PetroSaudi’s clapped out drill ships barely functioned. Therefore, the state oil company PDVSA had declined to pay the money.

A British judge had ruled there was indeed fraud, but when PetroSaudi took the matter to appeal the London higher courts opined that this was not sufficient to withhold cash pledged by PDVSA through Letters of Credit to PetroSaudi.  As a result the vast sum of recycled stolen money from 1MDB was placed into the client account of Clyde & Co, who were PetroSaudi’s lawyers in the case. Kerching.

However, Obaid and friends then had to face a second wave of setbacks when the triumphant law firm itself developed cold feet about its clients, given their notorious role in 1MDB. Clyde & Co advised that it had decided not to pass on the money to an increasingly desperate Tarek, pending concerns that it might make them party to criminal actions currently being prosecuted by the various law enforcers targeting 1MDB’s stolen assets.

Tarek hired new lawyers to sue his old lawyers, and meanwhile the Department of Justice filed its own action to seize the cash.

Now it seems PetroSaudi’s persistence may pay off as the DOJ appear to have given up leaving Malaysia to pursue its claim alone. Once again signs are that the PN minority coup government, which has been swiftly settling all the cases set up by the previous elected PH government, is open negotiate.

Last month Amir Zharif Abdullah whose law firm was engaged to retrieve the cash on behalf of the MACC stated he was actively on the case, but has not responded to Sarawak Report. The Malaysian court issued a temporary freeze on the cash last year, however yesterday a ruling removed the money from Clyde & Co and into the purview of the London court, which would seem another ‘step in the right direction’ from the point of view of PetroSaudi.

Now all is needed is for the Malaysian ’emergency’ government to announce it is satisfied with a cut price arrangement secretively hidden by non-disclosure clauses, which in return would be likely to leave Mr Obaid with a sizeable chunk of Malaysia’s stolen millions. The chances seem pretty high that this is the remit of Mr Zharif as with the other lawyers instructed by PN.

However, there remain several clouds on the horizon for the PetroSaudi duo, Obaid and Mahony. Judge Dale Fischer complained on rejecting the DOJ seizure application that the prosecutors had not sufficiently evidenced that the company directors had been aware of the fraudulent nature of the the 1MDB case as a basis for confiscating the profits.

The Swiss authorities feel differently on the other hand. Here prosecutors have been pursuing a criminal case against the two men and others for over two years relating to a series of serious charges, including not just fraud and money laundering over 1MDB but also the false imprisonment of Swiss national Xavier Justo, a key whistleblower in the case who ended up spending 18 months in a Bangkok jail based on a false complaint orchestrated by PetroSaudi together with Najib and Jho Low.

A development in that case, reported yesterday in the Swiss media, is that the prosecutors have been given vital permission by the court to explore the data provided by Justo from PetroSaudi’s servers in order to pursue their case.

PetroSaudi has been obstructing on this and every other point, but this is a major setback for the defendants. Sarawak Report has seen the data referred to and it answers amply any questions that the California judge might have cared to ask regarding the complicity of PetroSaudi in 1MDB and its fraudulent claims to have been a multi-million dollar company.

PN may be on the cusp of settling PetroSaudi with several millions, but the directors themselves are still facing the prospect of landing behind bars, which is where their original partner, the Saudi Prince Turki bin Abdullah (who received over $70 million from 1MDB) has already languished for several years on separate charges in Saudi Arabia.