Just before a deadline on the case the US Department of Justice has filed an amended plea to the California court to enact an asset seizure against $340 million that is still believed to be sitting in a law firm’s client account in the UK, but which Tarek Obaid (as remaining shareholder and director of PetroSaudi International) would very much like to get his hands on.

Earlier in the month the judge had tossed out the DOJ’s original application stating that it made an insufficient case against seizing these proceeds from 1MDB because it had not shown that Obaid and his colleagues at PetroSaudi were necessarily aware of the fraudulent nature of the fund.

Followers of the 1MDB saga and those who have read SR’s reporting on the evidence from the PetroSaudi data made available by whistleblower Xavier Justo might find such a  conclusion laughable. However, the intelligence was that the DOJ attorneys were likely to give up on the process, leaving Tarek Obaid free to demand the money be handed over by his London lawyers Clyde & Co.

A court order gained by Britain’s National Crime Agency (NCA) to freeze it till that point was due to lapse the moment the DOJ case expired. The NCA had apparently already informed the Malaysians that they would not be able to apply a separate order by the KL court asking for the money to be held pending 1MDB’s own case against PetroSaudi.

So, after all had once seemed lost for Tarek and his co-conspirators, the game was back on with possibly just hours before the money was released, with the prospect of a settlement with the cash-hungry PN government that would leave him with an ample fortune.

However, the further details now supplied by the DOJ’s last minute amended plea may very well throw a last minute spanner in the works. The beefed up narrative brings clear evidence of PetroSaudi’s deliberately deceptive strategy to defraud 1MDB as part of a clear conspiracy between Obaid, his advisor and former fellow director Patrick Mahony and Jho Low.

Again, followers of the unravelling of 1MDB will be aware of much of the story of how PetroSaudi’s directors inflated the value of their shell company by fraudulently claiming $2.9 billion of bogus assets to pose as credible joint venture partners for 1MDB’s $1.803 billion injection of cash.

However, the DOJ’s forensic examination of the money trail provides a fascinating insight into how Obaid used his position as a signatory and owner of the joint venture company 1MDB PetroSaudi to siphon money directly out of the joint account and into his privately owned PetroSaudi subsidiaries to engage in activities that had nothing to do with the stated remit of the 1MDB joint venture agreement.

It is the profit from those activities in Venezuela (themselves claimed to be fraudulent) that constitute the $340 million now at issue, which the DOJ therefore argues belongs to 1MDB (which never saw a penny back from its ‘investment’) and not PetroSaudi.

Shame But No Pain For JP Morgan

The entire chain of transactions was done under the less than watchful eye of JP Morgan Suisse, whom Sarawak Report has earlier shown held accounts for the 1MDB PetroSaudi JV, PetroSaudi itself and Obaid and Mahony’s personal accounts, and allowed huge sums of money to flow between them without complaint thanks to Obaid’s status as one of the signatories on the joint venture account.

The Swiss regulator FINMA lambasted the US bank for its serious failings over the above, stating it was “easily placated“:

“The bank failed to question or screen certain fund transfers from the sovereign wealth fund, and it couldn’t spot blurred lines between business accounts, and personal ones. In one case, J.P. Morgan created an account worth several hundred million dollars from the fund for an individual with close ties to an 1MBD business partner.

If J.P. Morgan managed to identify clients as politically sensitive, requiring cautious handling, it didn’t fully manage the higher risks from the relationships, was satisfied with incomplete or inconsistent client information, and even ignored automatically-generated alerts. The bank said it had increased training, added staff and made improvements in monitoring and surveillance in Switzerland since the infractions occurred. [Fine News]

Thanks apparently to these apologies and planned improvements the Swiss then let the US mega-bank off entirely for having “seriously breached anti-money laundering regulations by failing to screen adequately transactions and business relationships” on these lucrative accounts: no penalties whatsoever.

The new filing by the DOJ lays out the money trail, but sets out by rehearsing to the court how Tarek Obaid with the full support and connivance of Mahony and Jho Low fraudulently inflated the value of his shell company by claiming ownership of a valuable Caspian Sea oil concession which the 1MDB joint venture was supposed to be investing in exploiting. He didn’t own it and it wasn’t nearly worth what he said it was worth:

For example, in correspondence between OBAID and his business partner Patrick MAHONY, the Chief Investment Officer of PSI, dated September 10, 2009, MAHONY referred to “the Canadian company [i.e. Buried Hill] that currently owns the asset in Turkmenistan.” Furthermore, OBAID himself negotiated with Buried Hill during 2008 and 2009 to try to either acquire the Turkmenistan energy asset or acquire Buried Hill itself, but OBAID ultimately broke off negotiations with Buried Hill through a termination letter that he sent on November 24, 2009.20

At the time he signed the Joint Venture Agreement, OBAID also knew that the Turkmenistan energy asset was worth only $700 million, or $1-1.5 billion if an international dispute were resolved as to whether this asset actually lay within the territorial waters of Turkmenistan or Azerbaijan

OBAID knew that the Joint Venture would not actually exploit the PSI Assets. Indeed, at the time he pledged the PSI Assets in Turkmenistan and Argentina to the Joint Venture, OBAID was planning to use 1MDB’s money to fund a drilling venture in Venezuela, not Turkmenistan or Argentina. OBAID and MAHONY discussed this Venezuelan drilling venture between themselves in email communication dated September 10, 2009, even as they did not tell 1MDB’s board that any of 1MDB’s money would be used for this purpose.

Thus according to the DOJ, Obaid first procured the investment under false pretences and then siphoned $300 million out of the venture (with the acquiescence of Jho Low who had stolen the lion’s share already) into a private venture in Venezuela that he had been planning with Mahony. 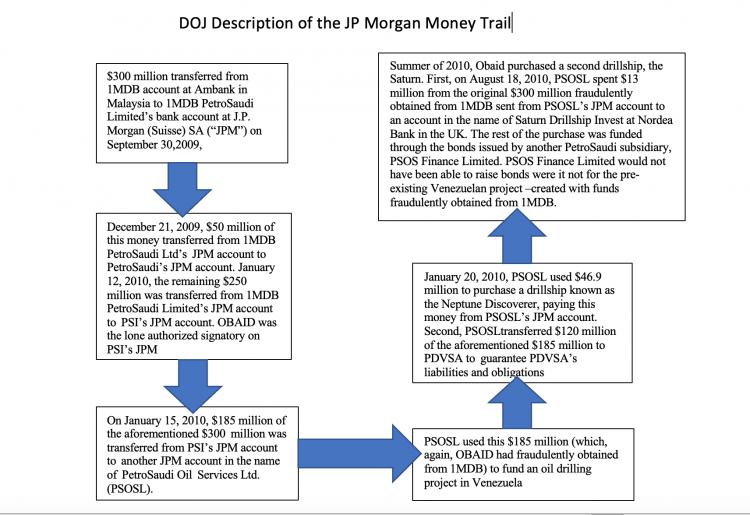 It is the money obtained by by PetroSaudi from Venezuela after a legal dispute over fraudulent operations was resolved in PetroSaudi’s favour that is now sitting in the Clyde & Co account in London.

Were the money to be returned to 1MDB however it would not represent a profit over the intervening decade, because as Sarawak Report has detailed in other articles PetroSaudi managed to extract further loans and investments from 1MDB including $240 million in September 2010 out of a $500 million further loan.

The remaining $260 million of that 1MDB ‘loan’ was invested in the bogus buy out of Jho Low’s own company UBG, jointly owned with Sarawak’s chief minister, Taib Mahmud. Tarek Obaid fraudulently posed as the buyer of the company having concluded a deal with a company of Jho Low’s giving it control of the purchase and the company. None of these monies were returned to 1MDB let alone with profit.

However, Malaysians may be heartened to learn that this remaining cash pile may yet be retrieved from the eager grasp of Tarek Obaid, who is facing criminal prosecution in Switzerland over the same matters.

How much of it will be returned by the present PN government to paying off the debts of 1MDB is a separate if contentious issue.