Tasmania's Environmentalists Rally In Solidarity With People Of Ulu Kelawit-Tatau

A protest has been organised by Tasmania’s environmental groups* outside the Hobart office of Ta Ann today, Thursday November 1st, in solidarity with the people of Ulu Kelawit, who have faced aggressive strong-arm and illegal tactics by Mukah police in reponse to a peaceful blockade.

The blockade was set up to highlight objections to the activities of subsidiary companies of the logging conglomerate Ta Ann, which local people complain have been operating in their area without consent, creating great harm to their livelihoods. 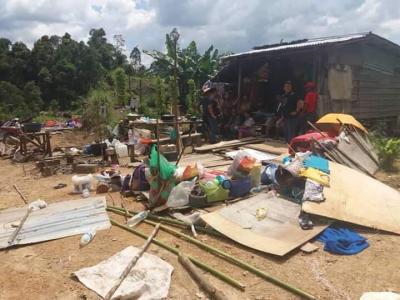 According to a series of pictures and press releases by the Iban rights association SADIA and the Save Rivers campaign, police arrived at the blockade site on November 25th and brutally tore down the structure, beating many of the local people, including women.

A number of the police wore maskes.

The blockade was destroyed, along with many artifacts and possessions, including handphones which were deliberately crushed. 11 people were then arbitrarily arrested, including one woman and they were then held for an excessive period in the Mukah police lock up as their relatives were forced to wait outside.

Mr. Nasar Anak Nawing from Km 16 Jalan Tatau, who was the first one arrested, commented: “What is the role of the police? Is it to protect the interests of the big companies, or is it to see there is justice for all? We were not looting, we were not violent, but we were there to protect our land and livelihood and to protect our rivers from being destroyed.”
Describing the scene, Ms. Imuk Anak Imang from Rumah Tandang said: “The police came without any warning and without telling us. They collected our handphones and they were wearing masks. One of them shouted ‘arrest them! Arrest them!” [Press Release, Save Rivers]

An outrageous bail of RM4,000 each had been demanded of each of these individuals (around four months average income) as a result of which they were only released yesterday, October 31st, after the Mukah High Court reduced the bail to RM500 per person. 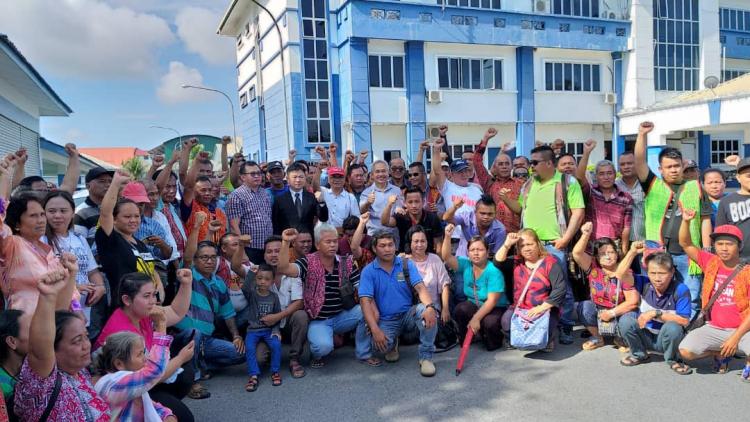 Demostrating outside the lock-up in Mukah

The aggressive tactics had begun on October 21st with the arrest of a community leader Nasar anak Mawing under S341 of the Penal Code (illegally restraining any person). He was subsequently also released on bail, however all 12 have now been charged.

Hobart’s Green Party, substantially strengthened its position in local elections this week against the background of a long-running battle between campaign with Ta Ann, given the Taib Mahmud related company has been the main driver of deforestation in the state of Tasmania for the past decade (in fact Sarawak companies connected to the former chief minister and present governor are engaged in a web of controversial timber operations across the globe).

Our foundation works to protect the environment in Tasmania and elsewhere, including Sarawak. It promotes human happiness. The above events in Sarawak involving your company are an outcome of both environmental degradation, including deforestation, and human misery.
I request a meeting of foundation representatives with you to discuss a remedy for the Iban people. [Bob Brown]

Ta Ann has received multi-million dollar subsidies to set up veneer mills in Tasmania, which have sustained what would otherwise be loss-making logging operations that have destroyed much of what remains of Australia’s remaining forest wilderness and vanishing unique wildlife.

Reports by the Huon Valley Environment Centre in the state have demonstrated that the company has lied about its products (claiming they are from plantation wood instead of wild virgin forest) and have abused their access to Australian certification labelling to disguise combined products that are largely made up of illegal Sarawak timber being sold in places like Japan.

The company is one of the ‘big six’ Sarawak timber coporations and is most demonstrably linked to Taib Mahmud through the Chairmanship of his closest family business proxy, cousin Hamed Sepawi.  Sepawi’s companies have been handed vast plantation licences, timber concessions and construction contracts in Sarawak, without tender and presumably thanks to the influence of his cousin, who for decades occupied the role of chief minister, finanace minister, planning minister and head of the Land Custody and Development Authority in the state.

Sepawi himself has acted as Chair of the Timber Development Council, Treasurer of the ruling PBB party and also as Chairman of Sarawak Energy (at the time that it invited Hydro-Tasmania to become involved in Sarawak’s dam building ambitions, contemporaneously with the offer of subsidies by Tasmania to Ta Ann).

Indeed, opening Ta Ann’s two veneer factories in Tasmania back in 2006 Sepawi thought fit to mention that he had taken care to place them in the respective constituencies of two of the politicians most influential in gaining his company access to logging in the state.

Ta Ann subsidiaries were booted out of Liberia in 2014 for what the then President described as gross bribery of political figures to gain timber concessions amounting to a quarter of the country’s forested land mass. In the same year the Norwegian state pension fund also banned further investment in Ta Ann, owing to its deceptive and destructive environmental record.

Back in Sarawak Sepawi’s companies have been embroiled in numerous similar head on clashes with native landowners, whose rights Governor Taib Mahmud has relentlessly sought to remove during his many years in office.  In the case of the plantation company Grand Perfect, which is the largest Acacia plantation in South East Asia, local people were driven from their homes, which were then bulldozed and burned before their eyes with their possessions left inside.

Protestors at Ulu Kelawit according to the press statements explaining their plight have complained that subsidiaries of Ta Ann, including Stonehead Sdn Bhd (Mining)* have been operating in their lands since 2012. They have sought to buy off the people’s representatives, while ignoring the plight of the rest of the population:

The oil palm company, Cipta Sendirian Berhad, originally compensated the villagers for their land, but has discontinued payments. After the oil palm company came in, Stone Head Sendirian Berhad, the sandstone rock quarry company, started operations in the vicinity. An additional subsidiary of Ta Ann began another monoculture tree plantation.
These companies, and particularly the operations of the rock quarry, have destroyed the Sungai Besangin, their river source. At first the water became extremely poisonous and polluted and killed their paddy fields and crops. And then the river completely dried up. Through the loss of their water source, villagers have lost their source of livelihood as they are no longer able to grow crops or fish on the river. They have also lost their source of food and drinking water.
When the villagers began to notice the impacts of the Ta Ann companies on their rivers they wrote letters to their headmen and the companies, asking to have a discussion about how to fix the situation. The companies never responded to the villagers, instead offering compensation only to the headmen, who in turn sided with the company. With the headmen on the side of the company, and the lack of response from the company, the villagers had no other choice but to peacefully protest through a blockade that they began in early October, 2018. [Save Rivers Press Release

The re-emergence of more confrontational and aggressive tactics by Sarawak authorities and companies connected with Governor Taib Mahmud appears part of a pattern that possibly represents the tactical response of the local regime to the sweeping federal changes following the May elections.

Taib’s own PBB and allied parties are no longer part of the federal ruling coalition, although they left BN when that lost power straight after the election. Taib and his chief minister, Abang Johari, have made clear they favour a confrontational approach, on what they describe as Sarawak issues (in particular the campaign by local politicians to seize back control of oil fields ceded to the federal government by Taib back in 1974).

This despite the fact that Johari and his newly formed GPS coalition have indicated they will be willing to work with the PH government on federal issues. In a blatant anti-demorcratic violation of that pledge, instructions have just gone out to Sarawak headmen not to engage with non GPS parties from the ruling federal government.

The new policy indicates that Sarawak’s local government has decided to crack down in response to feeling threatened by the loss of protection at federal level.  Plans for the controversial Baram Dam, which were judiciously shelved in advance of the 2016 state election by the previous chief minister, Adenan Satem, are now reportedly being reinstated.

In which case, it appears that the angry and arrogant old Governor, Taib Mahmud, has decided to take his people on, as well as the federal government, to show whose family is boss in Sarawak.

Such tactics will not go unnoticed in Malaysia or Tasmania.

*amended – previously we stated three of the companies are subsidiaries of Ta Ann.