Sarawak Report has now received the full details of the payments received by CIMB boss Nazir Razak from his brother Najib, out money which turned out to have been stolen from 1MDB.

Nazir Razak admitted to these payments when they were first reported by the Wall Street Journal last year, which amounted to the equivalent of around $7 million.  Nazir temporarily stood down from his position in April 2016 and initiated an enquiry at the bank.

Returning to his position the following month, Nazir said that he had been exonerated by the bank’s independent enquiry into its boss.  The Prime Minister’s brother had explained he had been asked by Najib to assist in processing money, which he had understood to have been legitimately raised through genuine donations for the BN election effort.

However, Nazir did not publicly appear to explain how it could be necessary to ask a senior banking official, like himself, to process legitimate money – rather than putting it through the party books in the normal manner?

On the other hand, Nazir did helpfully confirm where this money was later sent:

Nazir, a leading Malaysian corporate figure, had said earlier that he believed the money came from legitimate fundraising, and said that CIMB bank staff disbursed the funds to ruling-party politicians on the instructions of his brother.

At Monday’s news conference, the banker spoke of Najib’s request for assistance, and said it was the first and last time he had been asked for such help.

“My brother asked for some help and I agreed after I assessed that it would not involve anything illegal or misuse of my position at CIMB, or any inappropriate use of CIMB’s resources,” Nazir told a news conference after the bank’s annual general meeting. [South China Morning Post]

Sarawak Report suggests that Nazir, who has shown some commendable disapproval of corrupt practices and unexplained wealth on the part of his brother, ought now provide further details on these furtive handouts.

Specifically, which ruling party politicians were paid, how much were they paid and why were they paid, as opposed to their formal party offices?

This is particularly so now that Sarawak Report is in a position to list the exact payments made to Nazir, of which there were four.

However, these pre-election requests turn out not to have been “the first and last” after all.

Therefore, the election payments appear, according to these investigation documents, not to have been “the last time he helped his brother in this way“.

So, perhaps Nazir can help answer the question why was Najib paying “ruling party politicians”, secretly through him again, even AFTER the elections?

In fact, why was he paying them at all?

Sarawak Report suggests that in the absence of any official explanation so far, Malaysians are entitled to conclude that Najib was attempting to buy his own party leadership’s loyalty to him personally, by putting large numbers of ringgit in the pockets of key players.

If so, it represents one further act of extreme political corruption waged against the democratic process of Malaysia.  Ironically, it is so far the Editor of Sarawak Report who has been charged by the Malaysian authorities with “activities detrimental to parliamentary democracy” for pointing such matters out.

Names in the frame

Not all recipients from Najib’s slush fund were paid so secretly through his brother’s bank, however.  We have details of some political figures who were paid directly with cheques from Najib, which substantiates the theory that the reason why all these UMNO/BN ‘bigwigs’ have stood silently by or in some cases have raced to his defence over 1MDB is because he has them all bought and paid for with that very self same stolen public money.

In a not necessarily exhaustive list, known politicians who have directly received personal cheques from the 1MDB accounts are as follows: 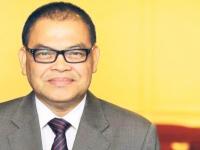 Then just two days before the election a fat RM10,000,000 was extracted processed made out to Dato Hanafi Bin Mamat an UMNO senator from Kelantan.

What was he doing with that money?  Certainly, the handout appears to have bought Hanafi’s firm loyalty.

After the eruption of the 1MDB scandal it was he who was chastising his local party members against showing any dissent to Najib over the matter:

Kelantan Umno would take stern action against two party branches in Machang following the action of those who openly reject the leadership of Datuk Seri Najib Tun Razak as party president.

Secretary Datuk Hanafi Mamat said it because that’s considered not in accordance with the prescribed channel as the party’s constitution and rules.

“They should be allowed to use channels that criticize or reprimand in which all members have been informed about this, but if the president so openly about ready for action.

“What they are doing is contrary to the values and culture of Umno, we do not restrict members to criticize the leadership but admonished to prudence. Do not join the movement to topple the president at the expense of the party, “he said [translation Sinar online]

The payments continued after the election. of course, on 27th November 2013 Ahman Maslan received RM2 million, at the time UMNO Information Chief and always one of Najib’s most voluble supporters.

As also previously reported, on 26/11/13 the Chairman of the UMNO Backbenchers group Sharhril Abdul Samad also received a generous donation of RM1 million from the PM. Sharhril went on this year to take over FELDA the floundering famers’ fund run into the ground by Najib’s policies.

This list is by no means likely to be exhaustive and there are other interesting payments, including two telling handouts of RM100,000 each in June 2011 and April 2012 to a certain Ruslan Kassim.  Ruslan is now a leading light of the extreme nationalist Malay ‘supremacist’ group Perkasa, known for its disruptive and divisive activities on the ground.

Najib has always indicated he does not support the party, which has nevertheless been whipping up Malay nationalism against opposition parties associated with tolerance towards minority groups.  Perhaps he can explain these payments also?