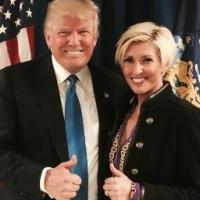 Healy reportedly trades off her continuing good relations with the Trump administration.

If you are desperately trying to curry favour with America, in order to get off corruption charges, ‘dissing’ the President’s pal would appear not to be the way to go about it.

Press secretary, Tengku Sariffuddin Tengku Ahmad, issued this statement in response to the revelation that Baumgardner had registered her interest under FARA (Foreign Agents Registration Unit), which is a strict requirement of all lobbyists working in the United States:

“Contrary to recent media reports and a registration statement, neither the Prime Minister’s Office nor government of Malaysia has instructed, appointed or contracted in any form with the Godfrey Group Ltd, the 45 Group or Healy Baumgardner-Nardone”

That is a comprehensive black and white denial, which implies that Baumgardner falsely registered receiving $250,000 within a series of complex and mysterious lies.

Over several documents, available for free online under FARA’s ‘quick search’ of Active Registrants, Baumgardner’s company, The 45 Group, makes clear and repeated references to the PR job she has netted from the Government of Malaysia, specifically naming Najib Razak and the Prime Minister’s Office in the process.

Has she been hoodwinked?  Is she really supposed to be promoting somebody else entirely?

Let’s examine the points that the Prime Minsiter claims are untrue.

In her basic Short Form Registration Statement, registered on 19th May, Healy describes herself as having one foreign client, which she calls ‘The Republic of Malaysia’.  She states that she has been hired via the Godfrey Group Ltd., which turns out to be a BVI company but with an address in Taman Molek, Johor Bahru, as established by opposition MP Rafizi Ramli, who outed the whole affair.

What for? “The 45 Group will assist the Republic of Malaysia via the Godfrey Group Ltd with government relations and public relations services”. 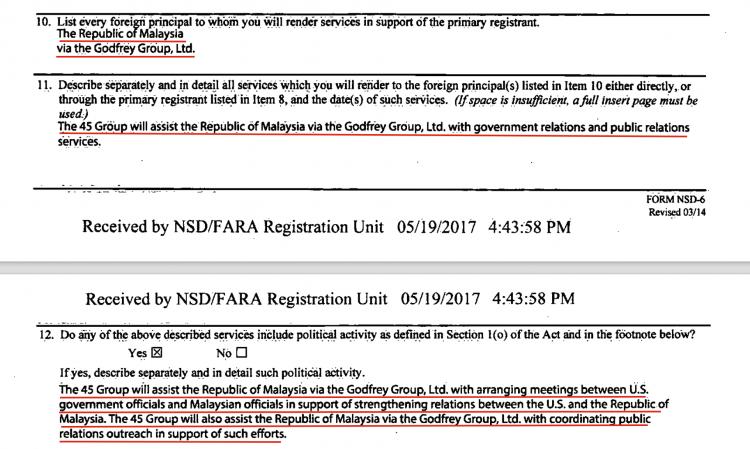 ‘The Republic of Malaysia’

Malaysians might wonder why it is that they maintain an expensive Embassy in Washington, which is officially tasked with just these duties, if Healy is now to be hired as well?  Except, of course, few will have failed to have developed a suspicion that this is more about boosting the image of the Prime Minister and arguing his case with the US Department of Justice, which is at this very moment examining money laundering offences committed by himself and his son Riza in the United States.

This assumption is strengthened by a second Document, the full Registration Statement, which cites the Office of The Prime Minister as her principal client via the shadowy Godfrey Group with the purpose of “strengthening the U.S. – Malaysian relationship”.

For performing these “Government Relations Services” Healy goes on to state on the same form that she received a payment on May 9th of $250,000 from the Godfrey Group

Has Healy simply dreamed all this up? 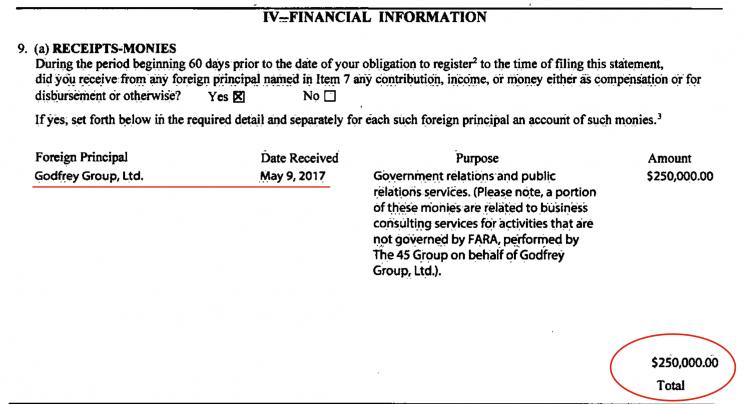 Proceed to Exhibit A in her registration, where she again states the Government of Malaysia and the Office of the Prime Minister as being her clients ‘via the Godfrey Group’ and then goes on to name Prime Minister Dato’ Sri Mohd Najib Razak as the “Official with whom the registrant deals”:

Najib named as the official with whom Healey deals!

Later in the same form Healy again repeats on a number of occasions the very same information about the aim of strengthening Malaysian – US relations and then goes on to be even more specific.  She will be “arranging meetings between US government officials and Malaysian officials and advocating on strengthening relations between the US and the ‘Republic of Malaysia”.

Does Najib and his press team really think that they can convince Malaysians that all this documentation registered by Healy Baumgardner is a series of big fat lies?

Which leads one to question why the Prime Minister is so anxious not to be caught out blatantly hiring an access monger so closely linked to President Trump? Did Najib imagine that by hiring Healy via a BVI company he could somehow circumvent the requirement for her to state her ultimate client and the person on whose behalf she would be lobbying in Washington DC?

This would seem to be the obvious conclusion to make, in which case Najib was badly advised and badly advised also to keep on digging himself into a deeper hole by denying it all now.

Healy Baumgardner had a career PR before joining the Tump campaign as a Senior Press Representative, a post from which she resigned in September 2016.  Her greatest claim to fame in that position was a car crash TV appearance, in which she found herself unable to defend Tump, who had appeared to praise North Korea’s Kim Jong-un for “taking out” (arbitrarily executing) various members of his family and administration.

Now that Healy has taken on the equally tough job of defending a world class kleptocrat behind the scenes, she should be just as wary of the dangers. Has she, for example, checked the origin of the money with which she is being paid by the shadowy and mysterious Godfrey Group from the BVI? 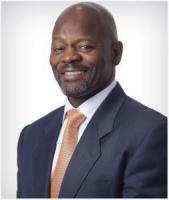 And has she done any homework at all on the background of immense scandal surrounding 1MDB and the criminal investigations currently on-going into her client and his family in ‘The Republic of Malaysia’?

For information she might do worse than pick up the phone to a predecessor linked to the Obama administration, who likewise got caught up in the blandishments and big money offers by Malaysia’s PM, Frank White.

Frank White also registered a FARA relationship with Najib Razak and 1MDB and on that occasion also Najib denied it. Within weeks of Sarawak Report exposing his role back in 2014 White had prudently severed all relations and closed down a half billion dollar investment fund also linked to Malaysia, Aabar and 1MDB.  His consolation appears to have been that he kept a $69 million managment fee in the process.