How Najib Plans To Eliminate The Opposition 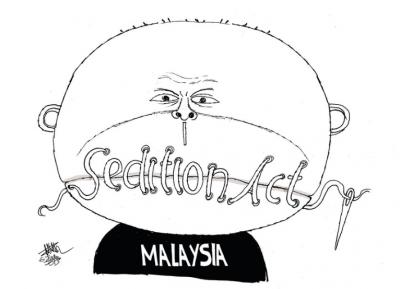 To protect the state or shut up critics? Zunar’s telling cartoons

Najib has openly acknowledged how extremely expensive it was to illegally buy the last election in Malaysia – RM2.6 billion was the amount that went into his personal account in March 2013 for this purpose, he has explained.

Sarawak Report has now revealed that an additional US$300 million had in fact earlier been paid into the same account from the same alleged source, between 2011-12, for purposes yet to be explained – pre-election planning?

To avoid a repeat of such challenging fund raising (more than Obama raised for the US Democrat victory) it has become plain that Najib has now adopted a cheaper and more efficient solution towards managing his planned victory at GE14. 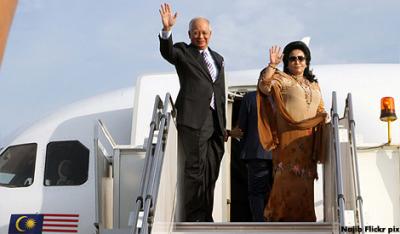 The Prime Minister, who has started to act in every way like a strong arm dictator, has been swiftly executing legal measures to outlaw and criminalise any individual who attempts to take up their constitutional duties as a representative of the opposition or to exert their rights as critics of his regime.

This blatant legal persecution is, of course, being carried out in the name of new laws to counter alleged terrorism, which have been predictably targeted not at violently inclined trouble-makers nor dangerous armed groups, but at people who voice dissent.

The world already knows how Najib employed Malaysia’s archaic and virtually unused laws against homosexuality, in order to drive the opposition leader Anwar Ibrahim into jail, after his coalition did far too well in the last election (despite the RM2.6 billion of illegal expenditure admitted by Najib).

The Prime Minister orchestrated the entire framing of Anwar from his own living room, as the court evidence eventually exposed.

However, this form of legal persecution is far too complex and time-consuming to deal with whole parties of opponents, who present an ever-growing threat for the next election, so it is the new anti-terror legislation, which Najib plainly sees as his simple solution for a mass destruction of the opposition.

So far, 138 cases have been opened as part of this so-called anti-terror ‘crackdown’ by Najib this year alone, according to the Aliran list. 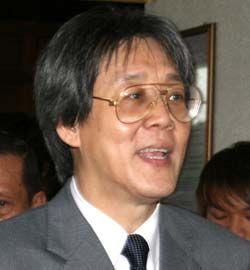 Under the so-called SOSMA (Security Offences and Special Measures Act) brought in by Najib last year, anyone can be arrested for an undefined offence of “state sabotage”, punishable with life imprisonment.

The latest person to be nabbed under that law today was none other than the well-known lawyer and former political secretary to previous prime minister Dr Mahathir, Matthias Chang, who has promptly gone on hunger strike.

Chang’s offence had been to defend a client, the businessman and former UMNO party branch leader Khairuddin Abu Hassan, who made reports about corruption at 1MDB to the FBI and other international bodies.

Khairuddin was himself banged up under SOSMA last week, because the courts had refused to detain him under an original charge of ‘activities detrimental to democracy’.  He was re-arrested on the grounds of “sabotage” as he walked free from the court – under SOSMA he can be held without charge for a month.

Meanwhile, the Prime Minister has been employing en-masse his earlier 2012 amendment to the Penal Code, which created this handy new crime of “activities detrimental to democracy”. 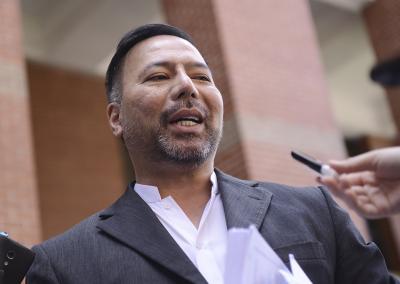 Khairuddin, freed on one charge only to be re-arrested outside the court under catch-all SOSMA

It must present a delicious irony for the PM every time he slaps the charge against one or other of his political enemies or indeed the very many civil society campaigners, who have also fallen foul of the nebulous ‘offence’ (including the author of this blog): for it is this law, of course, that is being specifically employed to actually destroy parliamentary democracy in Malaysia.

Najib has utilised the law against scores of key figures in Malaysia over the past few months, who happen to have voiced concern against his blatant abuse of the legal system and over the widespread corruption allegations relating to 1MDB and the PM’s own bank accounts.

Not a single extremist, armed individual, terrorist or ethnic supremacist, on the other hand, has yet been properly charged with the offence. 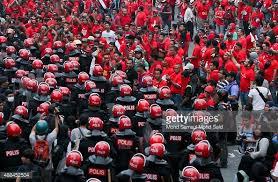 Riotous pro-Najib “Red Shirts” who threatened aggression against non Malays have got off scot free under the new crackdown laws.

This was the very concern raised back in 2012 when the law was originally debated and MP’s pointed out how this supposed anti-terror measure could be open to just such abuse. The PM brushed aside the very thought of it, of course!

And he has ploughed on with the further creation of a veritable panoply of similar and parallel offences over the past few months, in order to give himself an inexhaustible range of potential options to clout anyone who criticises him or questions the disappearance of vast sums of public money in recent years.

There is the revived colonial era Sedition Act (which he promised to abolish in the early honeymoon days of his premiership); the 2012 Peaceful Assembly Act, which outlaws any gathering of more than 3 people which has not been permitted by the authorities (enabling him to outlaw the recent Bersih march against corruption); the Printing, Presses and Publications Act, which Najib employed last month to ban T-shirts with the Bersih logo on and the Communications and Multi-media Act, brought in to shut down any reporting that the PM finds undermining or inconvenient.

Easy wheeze to ban the opposition 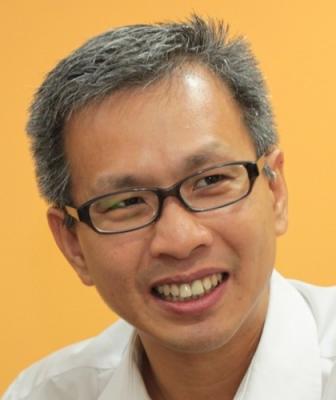 All of the above acts have numerous woolly, catch-all provisions, under which just about anyone can be accused for doing just about anything.

They have provided Najib with a wonderful cheap alternative for dealing with his political enemies, without having to bribe or blackmail a single voter at the next election – or even rig a ballot box.

He has been slapping charges over the last few months right left and centre against particularly opposition PKR politicians like Rafizi Ramli and the Public Accounts Committee member Tony Pua, who have been attempting to do their job of holding the government to account and raising the issue of 1MDB’s missing billions.

Over a dozen MPs so far have been charged under Najib’s various laws, as well as several leading human rights activists.

As Bersih leader Maria Chin Abdullah (herself charged under the Peaceful Assembly Act ) pointed out in London this week the tactic provides a gloriously simple way of destroying the opposition parties and handing victory on a plate before an election has even been called.

“The so-called crime of ‘activities detrimental to parliamentary democracy’ can carry a sentence of up to 20 years in jail.  The Sedition Act can result in a RM5,000 fine or jail for 3 years.  The benefit of these court cases for Najib is that if an MP is even just fined RM2,000 then our laws prohibit him or her from taking part not just in the coming election, but for the election after that.” she explained to journalists in the UK.

Bingo! bang goes the opposition and barely a ringgit expended this time around.

Najib moved a step nearer to achieving his master-plan on Tuesday this week when a disturbing Appeal Court ruling contradicted an earlier Appeal Court judgement on a case, which had questioned the constitutionality of the sedition laws, meaning numerous prosecutions which had been put on hold can go ahead.

They include 9 simultaneous prosecutions against the campaigning cartoonist Zunar, who is best known for lampooning the big hair of the PM’s wife and presenting her in comical way.  If found guilty of sedition for such cheek, Zunar could face 43 years in prison. As the International NGO Article 19 stated in response to the ruling:

“The Sedition Act violates international human rights law on freedom of expression and contradicts democratic values…[it] has been increasingly used to suppress legitimate offline and online dissent in Malaysia, whether by academics, cartoonists or opposition politicians… It is profoundly disappointing to see these decisions, in a country already facing an increasing crackdown on free speech, [Thomas Hughes Article 19]

The NGO further pointed out the weaknesses of the woolly law, which is exactly why Najib finds it so convenient for his purposes:

“It is ambiguous and unclear, and therefore not prescribed by law; it grants authorities too much discretion for arbitrary enforcement and therefore its scope is unforeseeable. It does not pursue a legitimate aim, abusing the framework of “national security” to clamp down on dissent which poses no genuine threat to a legitimate national security interest. It is not necessary in a democratic society.” [Article 19]

Indeed, none of those arrested for violence or hate related offences at the recent ‘Red Shirt’ pro-Najib and pro-Muslim supremacy event that caused fear and chaos in KL have been charged with any of these new offences, which were brought in in the name of curbing just their sort of disruptive activity.

Instead, we have seen incidents such as that of a 17 year old, who ‘liked’ a pro-Israel Facebook page and now faces a sedition probe. 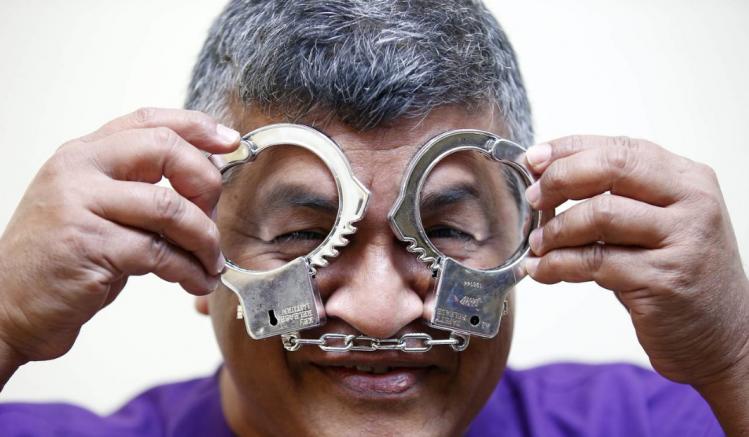 Zunar – facing 43 years for being cheeky to Rosmah!

The railroading of due process has certainly caused concern and outrage at the Malaysian Bar, which unanimously condemned the undermining of court procedures and the Sedition Act at its recent gathering.  Tonight lawyers are holding a candlelight vigil outside their colleague Matthias Chang’s prison cell.

However, Najib has long been active in ensuring that the senior appointments in the country’s judiciary do as they are told. His will may not prevail in the lower courts, but by the time his cases get to Appeal and the Federal Court, everyone knows what the outcome will be. 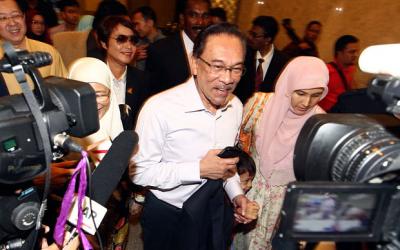 So, no surprise when today his new Attorney General, brought in to replace the sacked Abdul Gani Patail from his hand-picked Federal Court bench, also threw out the Central Bank’s evidence of corruption at 1MDB and closed down investigations on a blatant case of stolen billions from the public purse.

With this strategy in place and the court cases against a growing number of opposition MPs now full steam ahead, Najib could be looking at a next election where none of his seasoned opponents are even allowed to contest.

There will no longer be any need to search for future multi-billionaire Middle Eastern philanthropists, who hold the survival of Najib Razak’s political position dear to their hearts.

The outcome of the election will be assured, even before he calls it, despite the fact that he is now the most unpopular Prime Minister in Malaysia’s history.

There is of course a second deep irony in Najib’s chosen strategy, which is that while he has been doggedly criminalising legitimate opposition members through the creation of ill-defined offences, a good old-fashioned charge of theft and fraud was brought against him by his own forces of law and order in July, to which he responded by sacking the Attorney General and firing the investigating officers.