How Arul Kanda Lied To The 1MDB Board About 'Cash In The Bank' - EXCLUSIVE! 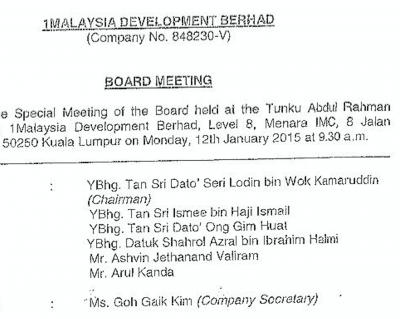 Sarawak Report has obtained minutes of a 1MDB board meeting, which prove that CEO Arul Kanda’s claim about ‘cash in the bank’ at BSI Singapore was not an unfortunate ‘miscommunication‘, but part of a deliberate strategy of misinformation.

In other words, it was a bare-faced and extended lie.

Bank Negara Malaysia is plainly aware of this state of affairs, given its statement challenging the Attorney General’s attempts to close down investigations into 1MDB over the past few hours.  It raises further concerns over the refusal by Najib’s inner circle to accept that billions were stolen, triggering an unprecedented cover-up by Malaysia’s desperate development fund.

In April Sarawak Report produced evidence from the Singapore authorities showing there was in fact no ‘cash’ in 1MDB’s BSI bank account.

It forced Kanda to make a series of retractions over parliamentary statements by the Minister of Finance, Najib Razak, claiming that US$1.103 billion, supposedly redeemed “in cash” from the PetroSaudi joint venture, had been paid into BSI Bank, Singapore.

“As the president of the company, I take full responsibility for this misunderstanding, and will ensure better communication with all stakeholders,” [Arul Kanda}

Kanda “clarified” that the assets held at BSI were in the form of ‘units’, which Sarawak Report has established are categorised as ‘level 3′, meaning there is no guarantee as to their actual worth (if any).

Yet we have now obtained minutes from an earlier board meeting in January, which make plain that the new CEO had given detailed assurances to Board members that there was indeed ‘cash’ in the so-called Brazen Sky company account at BSI bank.

Arul Kanda even gave a highly unbelievable excuse as to why, instead of using these alleged cash funds, 1MDB was borrowing even more money to cover its pressing expenses.  This was in response to concerns by the Chairman, Lodin Wok Kamaruddin, that the management had publicly promised to repatriate the money and then failed to do so: 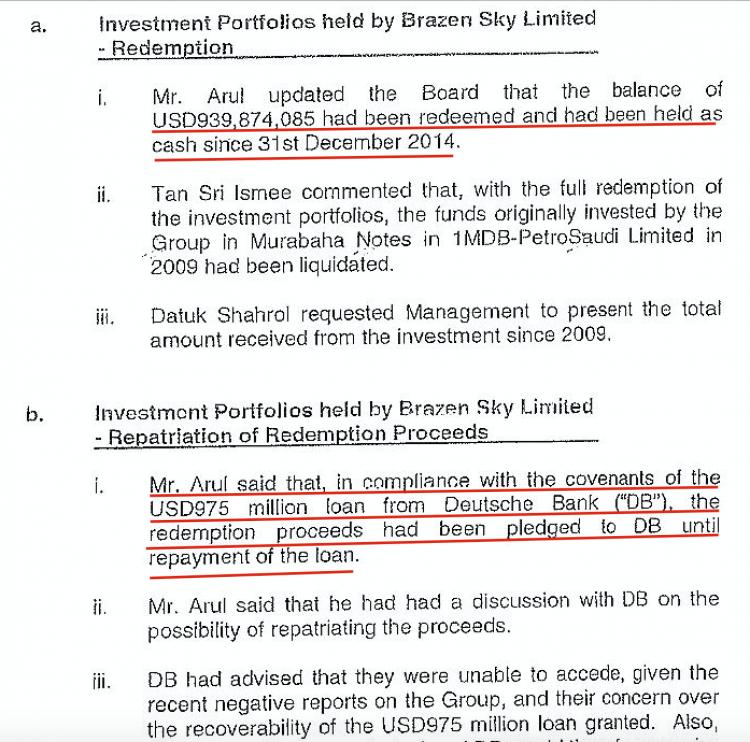 ‘held as cash’ – failure to clearly communicate or a straight lie?

Why we can’t ‘repatriate’ the cash 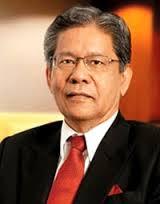 According to the above minutes, Arul Kanda’s excuse for not repatriating the ‘cash’ was that it had to be retained in the bank in Singapore in order to guarantee yet another loan by Deutsche Bank.

Board members had just acknowledged that 1MDB was experiencing serious cash flow and credibility problems, just as the company was planning to try and get out of its difficulties by issuing shares on the stock market.

And Lodin Wok Kamaruddin wanted to know why the management had failed to carry out its pledge to use the alleged remainder of the Cayman Island (Brazen Sky) fund, which was supposed to contain the ‘profits’ from the investment into PetroSaudi back in 2009-12.

Why not bring back the money board members asked?

Time to use the Brazen Sky fund made up of the ‘profits’ from PetroSaudi!

Arul Kanda’s answer is not only barely credible under the circumstances, it shows a double deception that could only have been intended.

The CEO had told his bemused board members that Deutsche Bank was preventing him from repatriating the money, because they were demanding that he keep the Singapore cash account as collateral for another almost identical sum of US$975 million they had loaned to 1MDB.

Surely, it was nonsensical to keep money in the bank to guarantee the borrowing of a virtually identical amount, especially when the ‘high financing costs’ had become a key concern at the fund?

So, this was not a communication slip by Kanda, it was a positive, detailed claim that the assets were being held in cash, giving the reason that the lending bank consortium would accept nothing less to guarantee their further loan.

There is another strange issue thrown up by these January minutes. In public statements 1MDB had claimed there was US$1.103 billion in the BSI Brazen Sky account, yet Kanda  informed the Board there was only US$939 million – over a hundred million less.

It appears that no one on the board saw fit to raise a query over such obvious matters.

Yet, Sarawak Report suggests there is only one credible explanation for all these twists and turns, which is that Kanda could not repatriate and use the alleged ‘cash’, because there was no cash.

There were merely level 3 assets representing ‘units’ of zero value in a fund managed by Hong Kong’s shadowy Bridge Partners based in the Cayman Islands.

That the Board accepted his feeble excuse that close to a billion dollars had to remain frozen in Singapore, in order to  guarantee a further billion dollar loan from Deutsche Bank, means either they were half-witted or they had decided to turn a blind eye to a desperate situation caused by blatant corrupted management of the fund.

Sarawak Report suggests that the board members were not financially illiterate half-wits and that they knew full well that the fund had been mismanaged on their watch.

This is born out by further evidence from the leaked minutes in our possession, which show that the meeting began with complaints by board members that past decisions had not been made with the proper consent and oversight of the Board.

There was a resolution therefore to change procedures to ensure that in future all investment decisions would be properly considered.

After all, they were talking about billions of dollars of public money!

Poor oversight by the Board – so who was making all the investment decisions at 1MDB? 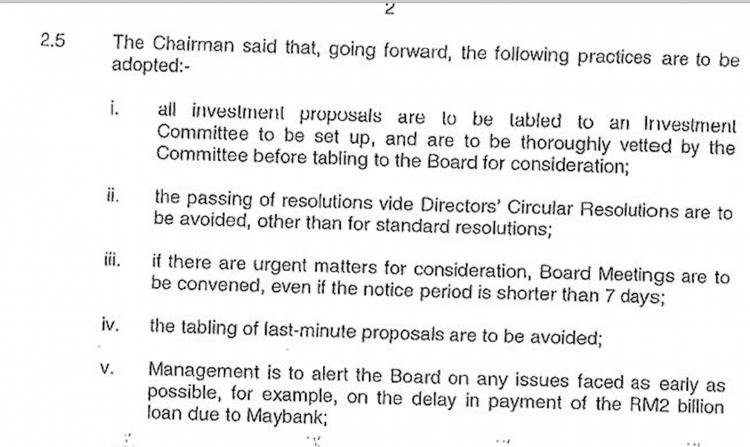 Now that we are RM42 billion in the red perhaps we should start doing things properly going forward?

These resolutions and the willingness to nevertheless accept Arul Kanda’s barmy logic of leaving a billion in the bank to guarantee a further billion worth of borrowing, show a staggering level of negligence by a board that can only have known better. 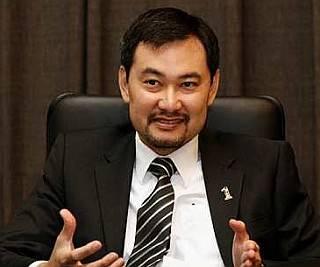 One individual, in particular, who can only have known better was a vocal member of the 1MDB board, whose comments are also registered in these revealing minutes of January 2015.

This was none other than the fund’s former Chief Executive, Shahrol Halmi, who knew exactly why there was no actual money in BSI’s Singapore accounts.

It was he, after all, who had presided over the theft of US$700 million from 1MDB back on day one of the so-called 1MDB PetroSaudi joint venture.  He had likewise signed off two further major ‘loans’ to PetroSaudi – US$500 million in September 2010 and then US$330 million that went straight from 1MDB into the Jho Low company Good Star Limited in 2011, according to documents obtained by Sarawak Report from the Bank Negara investigations into investments by the fund.

These payments total US$1.83 billion, which significantly represents the sum referred to by the Chief of Bank Negara Zeti Akhtar Aziz when she issued a damning statement on Thursday condemning the Attorney General’s refusal to issue proceedings against the theft and demanding that 1MDB should indeed repatriate the money.

Yet Halmi had the bare-faced cheek to ask on behalf of the board for his successor Arul Kanda to “present the total amount received from the investment since 2009″! 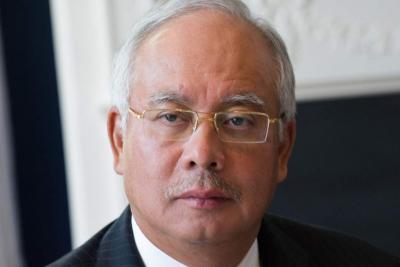 Sole shareholder and ultimate decision-make, the Minister of Finance

There is, of course, no longer any mystery as to where the PetroSaudi investment money went between 2009 and 2011 – and it did not end up in BSI bank!

It has been clearly demonstrated how there was nothing whatsoever ‘redeemed’ from the partnership in 2012 and therefore no money to ‘invest’ in a so-called Special Purpose Vehicle in the Caymans.

Documents, retrieved by Sarawak Report and now in the hands of several international financial regulators, make absolutely plain that all the money paid out from 1MDB’s alleged Saudi joint venture went to Jho Low’s Good Star Limited; the buy out of the UBG group (in which Jho Low had shares along with Taib Mahmud); pay offs to Jho Low’s co-conspirators at PetroSaudi International and injections of cash into PetroSaudi itself.

The eventual shadowy ‘sale’ of 1MDB’s so-called investment in PetroSaudi was therefore nothing more than a blatant sham. 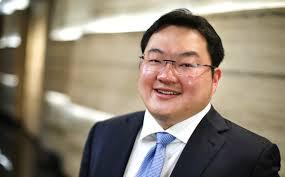 The third party ‘purchaser’ of this interest, who allegedly paid US$2.3 billion to 1MDB in 2012 (enabling Najib to trumpet that the fund had made a profit from the venture) was eventually revealed to be none other than the barely known Bridge Partners, an outfit based in Jho Low’s home base of Hong Kong.

1MDB then engaged the very same Bridge Partners themselves to purportedly manage the ‘cash fund’ in its ‘segregated portfolio account’ in the secretive Cayman Islands!

No wonder 1MDB subsequently found it impossible to persuade even its compliant auditors KPMG to sign off its 2013 company accounts. There were months of delay, during which then CEO, Shahrol Halmi, wrangled with a new team from Deloitte to sign off on the deal. 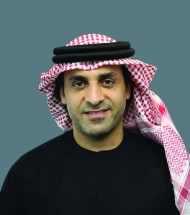 It has finally emerged that Deloitte finally agreed to ratify these painfully delayed accounts, only after Jho Low’s new best friends from Abu Dhabi’s Aabar fund agreed to place a guarantee on the value of the Cayman Island Brazen Sky account.

1MDB’s subsequent, hugely expensive dealings with Aabar itself saw the running up of further enormous and escalating debts through 2012 and 2013, as the fund sought to pay off its new friends from Abu Dhabi for their so-called assistance.

Once again Aabar/ IPIC has come in to temporarily rescue Malaysia’s beleaguered fund, while 1MDB’s sole shareholder and ultimate decision-maker (Najib Razak) seems hell bent on digging ever deeper holes in the Malaysian economy, purely in order to attemo to rescue his own political position.