One of the most shocking aspects of the fall out from the 1MDB scandal over the past few weeks has been the Prime Minister’s own admission that he used money obtained allegedly from an anonymous foreign donor to buy the last election.

This has amongst other things triggered a legal case from the opposition coalition leader Anwar Ibrahim, whom Najib placed behind bars soon after that highly contested win .

As part of the civil case, which was launched on 12th August, Anwar’s lawyers have now made extensive demands in the so-called discovery process, which concerns their basic legal right to information relevant to the case.

The information they are seeking includes many aspects of the investigations into the disappearances of public money undertaken by task forces that have now been largely undermined by actions taken by the Prime Minister. 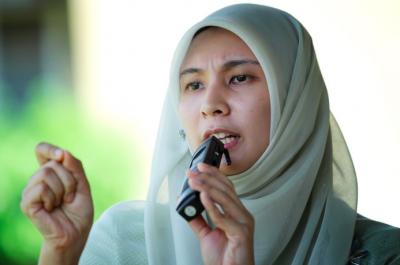 This includes who paid RM2.6 billion into Najib’s accounts from abroad and what the RM42 billion paid separately out of the public pension fund (KWAP) into another private Najib account was spent on?

The litigants have taken heart that the judges have so far refused demands by the defence team representing Najib, the Secretary of UMNO, 1MDB and the Election Commission to strike out the case before they have submitted arguments for their defence.

This means the defendants will have to answer Anwar’s challenges and that Najib is now facing this time in court a series of questions he has so far refused to answer about the money which came into his accounts, which he claims were spent on behalf of UMNO/BN during the election.

Anwar’s co-litigants, including his daughter Nurul Izzar, announced their demands at a press conference today, highlighting the backdrop to this week’s embarrassing anti-corruption conference in KL where numerous international speakers have challenged Najib’s refusals to answer corruption allegations against him.

The situation has been widely reported internationally:

““The prime minister did cancel his appearance at the conference. We told his office that if he came he would face hard questions,” Neil Martinson, director of communications at Transparency International, told the Guardian. [Guardian]

News reports are also noting the growing splits within the establishment as senior Malaysian officials have spoken out against Najib’s strong arm measures to close down investigations against himself:

“A senior Malaysian anti-corruption official has accused the government of political interference in the agency’s investigation into financial allegations involving Najib Razak, the prime minister. The Malaysian leader has faced growing demands to resign after it emerged that a payment of nearly $700m (£460m) was made into his personal bank account. ….The controversy has now deepened after Tunku Abdul Aziz Ibrahim, the advisory board chairman of the Malaysian anti-corruption commission (MACC), said the independent agency’s worked had suffered from “meddling” that was “ill-advised” by the government” [Telegraph]

Sarawak Report has obtained the documents laid before the court, which comprise four separate applications against the defendants in the case and three major banks which were involved in the handling of money that went into Najib’s accounts.

These documents can be read HERE, HERE, HERE and HERE 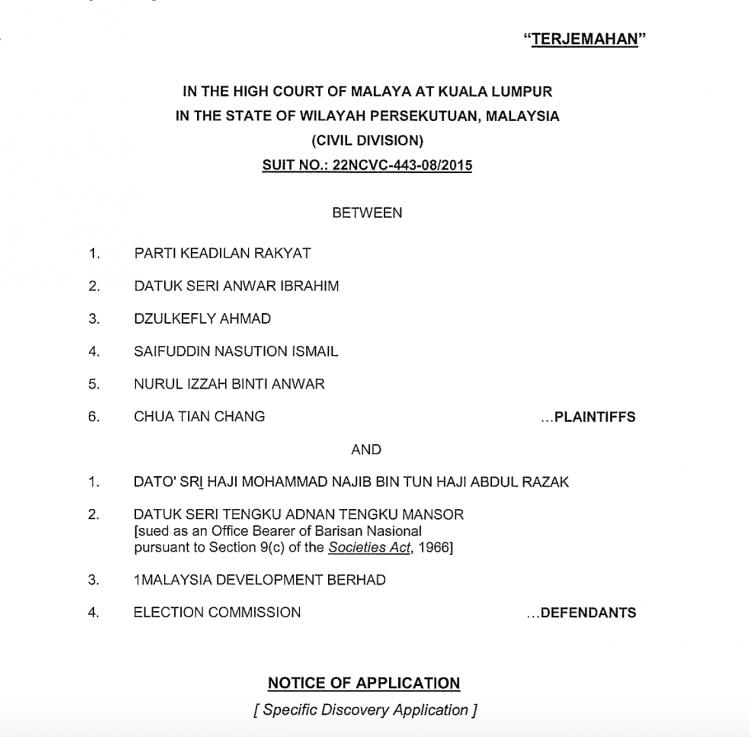 Demands for disclosure against the defendants

The first application for disclosure is against Najib and his co-defendents from Barisan National (BN), 1MDB and the Election Commission.  It asks for all the Prime Minister’s bank statements and other relevant documents relating to the accounts which received money both from KWAP and from Falcon Bank.

The application also asks for all documents available from BN relating to money received from Najib personally to help with their election expenses.

And from 1MDB the applicants demand disclosure of all the documents relating to payments to the Abu Dhabi Aabar fund in return for its guarantees in the raising of billions of dollars in loans, much of which have been barely accounted for.

The remaining three applications for disclosure put pressure on both AmBank and Affin Bank who held and transferred the moneys that ended up in various bank accounts owned by Najib – and also the US bank Goldman Sachs.

The litigants are asking for full details of the accounts which handled and received the RM2.6 billion from abroad and the RM42 million from the KWAP fund.

And with respect to Goldman Sachs they are demanding details of the money trail involved in the raising of a total of US$6.5 billion in bonds for 1MDB, some of which it has been alleged (for example by former Prime Minister Dr Mahathir) accounted for the money that ended up in Najib’s AmBank account.

Goldman Sachs are central to the 1MDB money laundering allegations and the giant US bank has found itself increasingly drawn into the scandal, which is now also being inevitably reviewed by America’s own regulators.

It remains to be seen whether court action can get Najib or these implicated banks to answer questions refused elsewhere.  Malaysia’s courts are generally regarded as having increasingly lost their independence to a regime that has been in power for six decades without interruption. 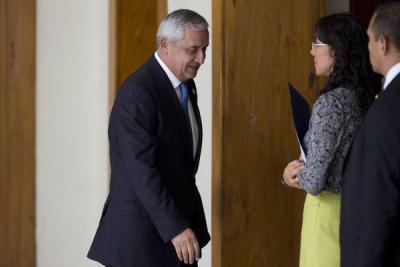 Nevertheless, the judges are aware of the litigants’ rights to relevant information in a case which touches on the fundamental issue of free and fair elections and allegations of major corruption.

The KL Transparency International anti-corruption conference has also opened its third and final day to the galvanising news that the Guatemalan President has himself just chosen to resign in the face of similar pressures to Najib, following corruption charges brought against him.

President Otto Pérez Molina has agreed to step aside following street demonstrations and to face the charges against him, rather than cling to office.

It’s a comparison that will not go unmentioned by critics of Najib Razak.