Raiding Religious Funds Is Nothing New In Sarawak ! 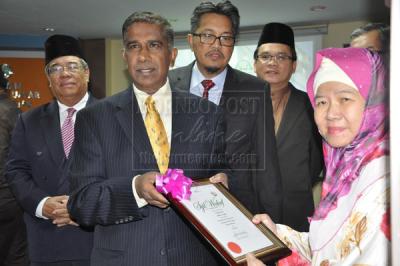 State Minister and Baitumal boss, Daud Abdul Rahman, handing money to the poor – but the bulk of Sarawak’s religious funds are ‘invested’, for example in construction projects by his own companies.

Malaysians have reacted in shock to the revelation that funds raised by the faithful have been used as a piggybank by BN bigwigs.

But, for Sarawakians it is all deja vu.

Sarawak Report has been raising concerns for years about this abuse of money, gathered often from very poor people scrimping and saving to perform their religious duties, but then diverted by negligent ‘trustees’ into the pockets of the rich and politically connected in the state.

So, it seems that Najib has merely taken a leaf from the PBB party/Taib Mahmud’s book.

We have previously highlighted how in Sarawak ‘investments’ by religious funds in development and construction projects have provided ample opportunities for the usual bunch of political commission takers to make a profit. 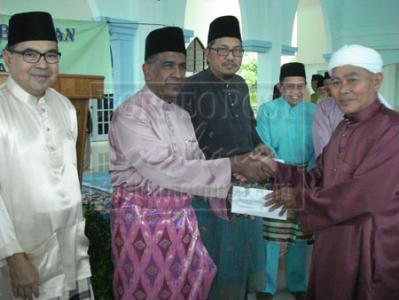 Baitrumal Board Chairman, YB Daud made RM25 million when the contract for Kuching’s new Baitulmal II commercial centre was passed through his own company

Likewise, the pattern of politicians simultaneously occupying key positions on the boards of wealthy religious funds is also well established in Sarawak, making a useful template for Najib in terms of bringing religion, and particularly religious finances, firmly under UMNO control.

PBB’s YB Daud Abdul Rahman, for example, was not only Minister for Islamic Affairs and also Minister of Infrastructure Development in Sarawak, but also Chairman of the Baitulmal Board and on the Board of Trustees for the Mosque, when we exposed him for orchestrating the granting of a massive building project by the Baitulmal fund to his own company Eastbourne Corporation.

He skimmed off several million before passing on the job to another company to carry out. 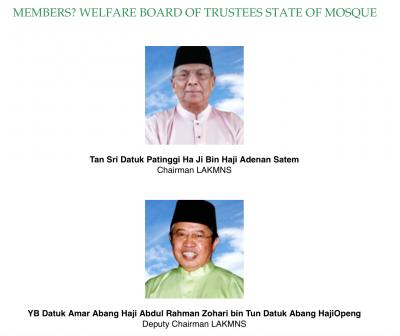 At the time in 2013 there was outrage in Sarawak, similar to the outrage this weekend in West Malaysia over the Tabung Haji scandal.

Police reports were lodged.  An election has since been held.  The Chief Minister has now been changed.

Yet, Daud remains as Minister for Islamic Affairs and Infrastructure Development and Chair of the Baitumal Committee and on the Board of the Lumbaga Amanah Kebajikan Masjid of Sarawak.

And the Board of august personages appointed to run Sarawak’s Mosque remains dominated by powerful politicians from the ruling party only. 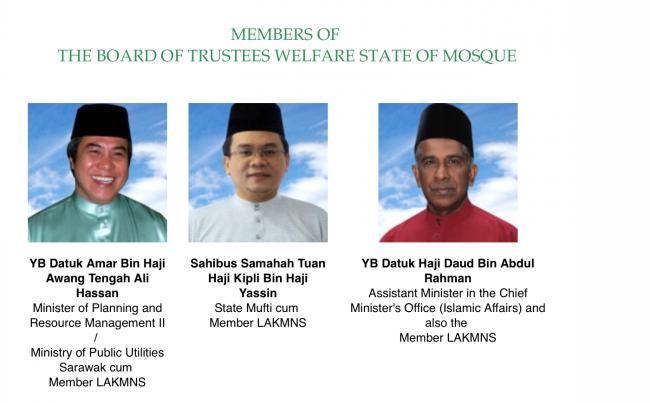 So, Najib Razak was acting on established practice when he decided to ask his political colleagues on the Tanbung Haji board to divert their funds into bailing out 1MDB.

As Sarawak Report has of course demonstrated, 1MDB’s own funds had disappeared to a considerable extent into the bank accounts of Najib’s high-living businessman friend, Jho Low. 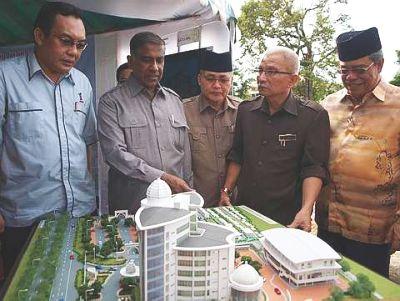 Najib was in fact taking another tip from the Sarawak way of doing things when he got involved with Jho Low in the first place.

Because, it was Chief Minister Taib Mahmud who had been the first to make use of the wheeler-dealer skills of this youthful business school graduate from Penang, who secretly used 1MDB money to buy out Taib’s UBG bank at an inflated price.

The UBG deal caused another of the holes in 1MDB’s finances, thereby increasing the debt which the Tanbung Haji money is now being employed to service.

As it has been pointed out, the highly inflated price of RM188.5 million being paid by the Tabung Haji fund for an acre and a half of land, which had been given for a pittance to 1MDB just two years ago, converts into dollars to pretty much EXACTLY the same amount (USD$52.5 million) as the debt repayment charge, which is facing 1MDB next week!

1MDB needs USD$52.5 million to service its debt next week. Tabung Haji paid RM188.5 million for an acre and a half of land that Najib’s Ministry of Finance had charged 1MDB only RM64 per sq ft (compared to this sale at  RM2,779 per sq ft)

Jho Low had originally met Najib’s all-powerful wife Rosmah, having networked through Taib and Taib’s sister Raziah during those heady days running up to the launch of the Islamic Fashion show in Monaco in 2010, just after the new PM took office.

The rest is history.

[Our original story from September 2013 is reproduced below] 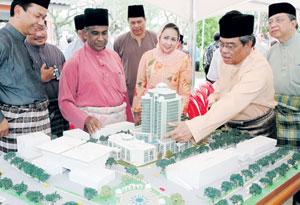 The Assistant Minister for Islamic Affairs, Daud Abdul Rahman, presides over all the money collected and distributed by Muslims in the state, through his role as Chairman of the Baitulmal Board (Tabung Baitulmal Sarawak/ TBS).

These funds include the obligatory Zakat, raised from the faithful in order to help the poor and needy.

However, much of the money is now being diverted into major commercial building projects and we can demonstrate that Daud has extracted millions of ringgit from these charitable funds by passing at least one of these mega-projects through his own company Eastbourne Corporation Bhd.

Records indicate that Eastbourne retained RM25million on the deal.

This leaves a shocking question.  Is the head of Sarawak’s Islamic fund abusing his position of trust to obtain millions raised from the faithful to help the poor?

According to our evidence this is indeed the situation and we challenge Daud to explain how it can be possibly appropriate to pass such contracts through his own company?

Diversion of the fund for the poor

Thanks to ordinances passed by Taib Mahmud, Islamic taxes are now enforced on muslims by the Sarawak State Government by law and amount to considerable sums.

However, there has been growing concern over the secretive management of this money by Daud and his so-called Islamic Council.

The opposition party DAP has called for the TBS to reveal their finances, but has received no response. 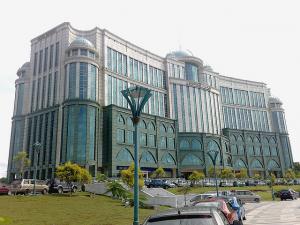 There has also been criticism over the recent decisions to spend most of this charitable money on large commercial buildings, rather than helping the needy, many of whom have complained that their support is currently being cut back by the Baitulmal Board.

Daud himself recently told reporters that the fund spends RM2million a year on support to the needy, adding “every year, we spend at least RM30 million to RM40 million to help the target group.”

But, such sums pale into insignificance besides the hundreds of millions allocated to a series of grand ‘Islamic Centres’, which have been put up in Kuching, Miri and Sibu.

The recently completed Baitulmal building in Kuching cost an announced RM90million and contains a 17 story tower with two floors of commercial space for 74 business lots.

Naim Cendera, a company closely identified with the Chief Minister and Chaired by his cousin Hamed Sepawi, was selected by Daud and his Baitulmal Board as the contractor on the project to be officially opened today, Monday 16th September.

Other building projects worth RM100 million have also been commissioned by the Baitulmal Board in Sibu and Miri.

Biggest Baitulmal building project was announced shortly after the election 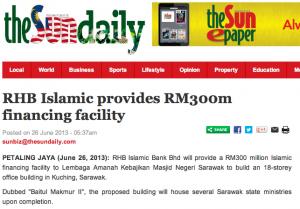 However, there is already a new and far grander project underway in Kuching, the so-called Baitul Makmur II building in Petra Jaya, announced in May, shortly after the GE13 election ‘victory’ for BN.

Baitul Makmur II is designed as an 18 floor commercial and office building, which it is claimed will house many of the state ministries on its completion.

The religious connection is less than clear. However RHB Bank confirmed in June that it will provide a RM300million ‘Islamic finance facility’ to help build this “office building’.

At the same time, according to our research, the construction company Hock Seng Lee publicly announced that it had received the contract to build this complex for the sum of RM228million.

Yet the contract came not from the Baitulmal Board directly, but from Daud’s own company Eastbourne instead! 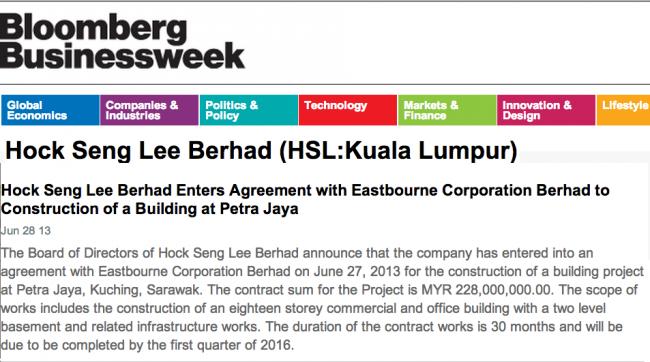 Research in the official Construction Industry Development Board website makes clear that the original contract was indeed awarded not to HSL but to Eastbourne Corporation Berhad (below) for RM253million shortly after the election on 25th May.

The RHB loan was announced a month later on 28th of June, the same day that HSL also announced that it had entered into an arrangement with Eastbourne to take on the project for RM228 million, RM25million less than the amount originally awarded by the Baitulmal Board. 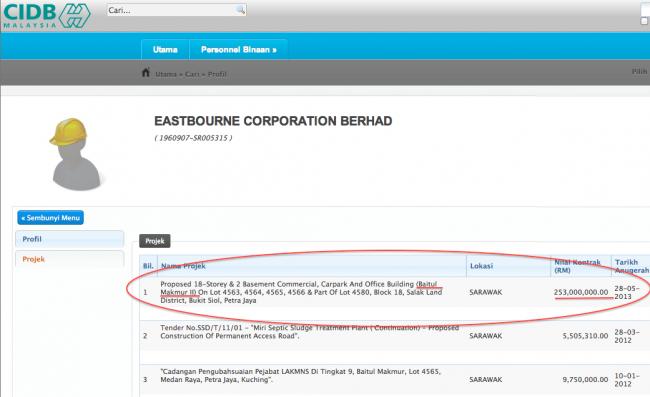 Given these public records, we require that the Minister for Islamic Affairs should explain why his Baitulmal Board sought fit to place this mega-construction project originally with his own company Eastbourne Corporation Bhd for RM253million, which swiftly then sub-contracted it to Hock Seng Lee for RM228million?

What is the remaining RM25million, which was raised in the name of charity from the faithful, being spent on?

It is a matter that Daud’s fellow YBs will be particularly interested in, because they themselves have been recently dragooned by the Chief Minister into ‘volunteering’ a large chunk of their newly increased salaries into the Baitulmal building projects! 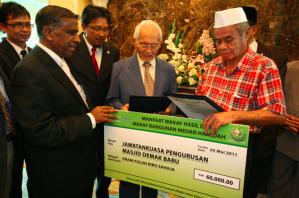 Civil servants who are muslim are also likely to be directly concerned, because it has been widely mooted that their salaries are also due be docked at source to pay the Zakat, which will then be managed by Daud’s Baitulmal Board.

This Minister for Islamic Affairs’ holds a parallel role as Sarawak’s Minister for Infrastructure Development, in which role he has also presided over numerous public contracts to Eastbourne.

With Daud as the key decision maker on infrastructure projects, we have revealed that the State of Sarawak has awarded Eastbourne Coroporation nearly a billion ringgit in public infrastructure contracts.

So, it seems a clear pattern has therefore emerged. We see a Minister, who has not hesitated to use his various positions of trust to put vast sums of public money through his own private business. 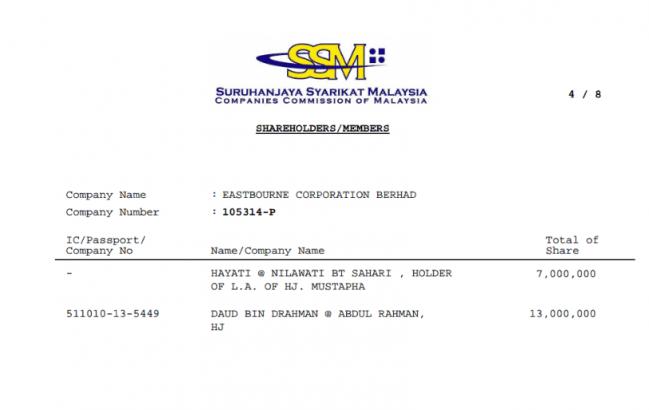 Many who have questioned whether it is the business of an Islamic charity to be spending the bulk of its money on largely commercial building projects will now have an answer as to one possible motive for these extravagant enterprises.

So far, all of the Baitulmal contracts are being pushed through companies in which decision makers have an interest.

Another case is a further enormous project being supported by Daud’s Baitulmal Board and the Sarawak Mosque Welfare Trust Board in Batu Lintang.   Once again this project benefits his political boss, Taib’s, family company Naim Cendera.

The former government quarters are now being turned into a vast shopping centre, 70% of which will be owned by Naim Cendera.

Managing Director Datuk Hasmi Hasnan said the proposed development would be sprawled over 13.597 hectares and be completed over 20 years.

“We will incorporate a water theme park, a roof garden and incorporate plenty of greeneries so as to come out with a development that is eviromental friendly and one that the local populace can enjoy and benefit from,” he said [Bernama]

The contractor Hock Seng Lee (HSL) has likewise established itself as a major client company of the Taib family, having received countless sub-contracts for projects that originally passed through the hands of relatives of the Chief Minister.

With the ubiquitous Idris Buang, another of Taib’s key political henchmen, in place as Chairman of the Board  of HSL it is not for nothing that the company is spoken of as ‘politically linked‘ – a company to be invested in as it is therefore likely to receive many more projects in the corrupted State of Sarawak. 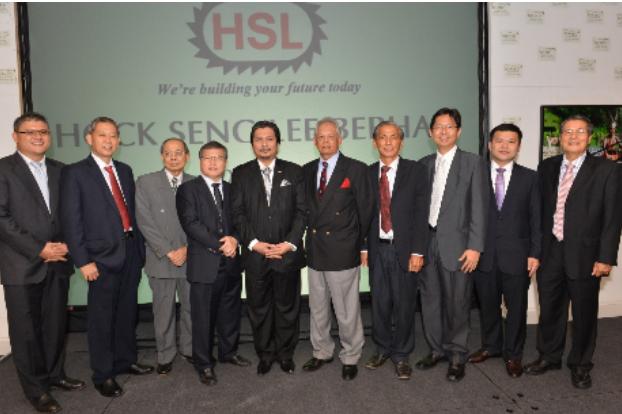