Making Millions Overnight..... Is It Proper And Is It True? 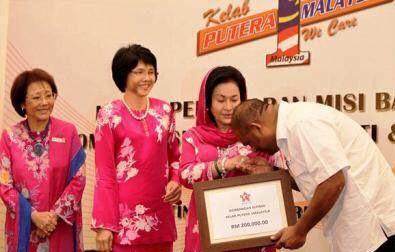 Rosmah receiving grateful obeisance from the Chair of Tabung Haji, Abdul Azeez Abdul Rahim, whom she herself appointed. Insiders report that he has been following her instructions over the quick flip purchase of the 1MDB plot.

Turning a fast buck, by making a ‘quick flip’ on their 1MDB property purchase has been the solution suggested by the Prime Minister this weekend to the guardians of Tabung Haji’s religious funds.

This was in response to the fund’s embarrassment over the leak of their bail out of 1MDB’s latest debt repayment.

However, the suggestion raised more questions than answers.

The obvious one has been posed by DAP MP Tony Pua, who said if it was true that there are three private sector buyers willing to pay RM5 million more than Tabung Haji, why had the Finance Minister/Prime Minister (also in charge of 1MDB) not sold to one of these directly?

Pua added that the ‘first family’ should lead by example and buy the land themselves, given that Najib’s step son’s properties in the US amount to almost an identical value:

“..since the Prime Minister believes that paying more than RM2,773 psf for the piece of land is still such a good deal, he should immediately advise Riza Aziz to dispose of his RM184 million of properties in the United States and bring back the cash to buy this piece of land from LTH.
If Dato’ Seri Najib insists that Malaysians have to bailout 1MDB for its monstrous financial problems, then it is only right that he set the example by asking his family members of unexplained immense wealth to repatriate their money to bailout 1MDB first. [Tony Pua press statement]

But, even if it were the case that such a margin exists on the land sold by 1MDB to Tabung Haji, is such profiteering Halal – or in another language ‘proper’?

In short, why had Najib Razak sold the land cheap, first to 1MDB then at a huge mark up (but not the full price) to Tabung Haji, given that he is entrusted with the best interests of the community as a whole?

Sarawak Report has learnt that there have been other payments injected into 1MDB, which remain as yet unpublicised.

These include a RM550 million (USD$150 million) loan to 1MDB by the Finance Ministry-owned development bank EXIM, which covered a recent controversial purchase of land from Tadmax.

Unfortunately, EXIM’s website is currently largely offline, so its investment strategy is hard to discern.

Yet, what is clear is that EXIM, like 1MDB, the Finance Ministry, the Prime Ministry and 1MDB, answers directly to the PM, Najib Razak.

When a single individual with an acquisitive wife inherits such a panoply of power there can be, as Malaysia has discovered, a problem with checks and balances.

However, there are certain international procedures that have started to set red lights flashing through Malaysia’s financial institutions, which the couple ought not control.

Sarawak Report has learnt from key sources that the local banking establishment has been pained by evidence of massive cash transactions through the personal accounts of the ‘First Lady’ and Prime Minister, which on each occasion has inevitably triggered the usual anti-money laundering alerts.

These transactions have initiated the normal reports, which in the case of larger cash amounts than RM30,000 must be lodged by the relevant banks within 24 hours and subjected to the scrutiny of oversight departments.

Under the rules, when these are identified as unusual transactions, the regulators are required to issue a written demand to the relevant account holder for a reasonable explanation, again to be answered in writing within a week.

Insiders are therefore asking why these normal mechanisms do not appear to have extended to requiring an explanation of the Prime/Finance Minister and his wife on the occasions that the anti-money laundering systems have been alerted in their case?

In particular, the PM’s wife, according to banking insiders, is known to have deposited very large cash amounts into her account at CIMB bank, which have then been used to pay enormous credit card bills.

The PM himself has been known to make huge cash withdrawals amounting to several million ringgit, at critical times from his own personal account at AmBank in KL.

Insiders want to know if any high level moves have yet been made to require the ‘First Family’ to give an account of these unusual transactions?

This is all the more so, now that it has been established by the Prime Minister’s spokesman that the source of Najib’s obvious wealth was his inheritance.

Because if this was the source, why are these cash injections going into Rosmah’s account, instead of being transferred electronically from Najib’s?

Halal means what is proper and decent 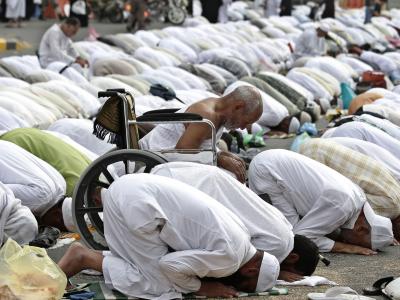 Exploiting the faithful to bail out 1MDB?

Meanwhile, Malaysians have been left scratching their heads over the rear-guard actions and excuses that have emanated from the Prime Minister during the course of the weekend, as he has sought to extricate himself from the devastating Tabung Haji leak .

Najib has seemed oblivious to the irony of his claim that the private sector will easily pay some RM5 million more for the land, which he has now advised the fund to re-sell in a ‘quick flip’ deal.

In fact, he has complained that if Tabung Haji had not been subjected to the leak and the subsequent negative publicity, the trustees could have hung onto the land for a little bit longer and turned an even bigger buck – he claims of up to RM170 million! 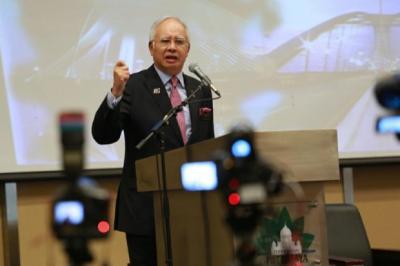 Defiant in Sabah – Najib had earlier pressed the scandal torn Chief Minister of the state to resign himself. Was there a deal to change his mind?

But, if this is the case, bystanders are inevitably asking, what is his own excuse for selling the land so far below market price and its alleged ‘market potential’ to Tabung Haji?

And, in his other role as Minister of Finance, what on earth was his excuse for originally selling this same parcel of land dirt cheap (65 times less) to 1MDB in the first place?

Because, through both of these transactions, supervised by him, the Rakya has lost out –  to the total tune of hundreds of millions of ringgit.

Yet, Najib just doesn’t seem to get it.

Instead he publicly talks in terms of making a fast buck for his cronies, when it is the people who are left the losers each and every time.

Does he think that the guardians of Tabung Haji wish to boost their religious funds in this way, through a cosy sweet heart deal at the expense of the wider population?

Isn’t the whole point of Islamic finance to avoid exacting favour or practicing extortion against others?

Of course, despite Najib’s improper excuses, Tabung Haji’s own risk analysis had actually described this land purchase as a high risk venture. from a market point of view. 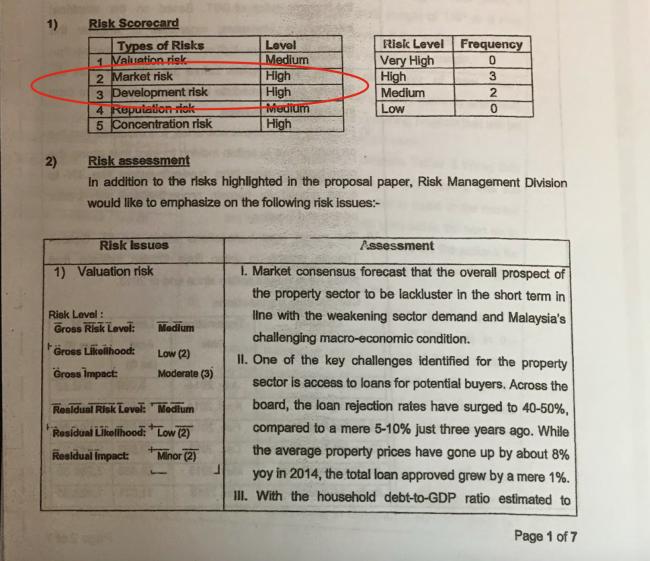 The Prime Minister has described the purchase as a sure bet to make millions… the risk assessors called it a high risk venture.

So, it appears that Najib and his resourceful spouse will now have to ask around, to find who will perform them a second favour by buying out the Tabung Haji land from the private sector at an even higher price?

Ought Malaysians tolerate any more of these secret deals for secret favours by a couple, who have accumulated all the levers of economic power under their single household?

Or is it time to return to the rule of law, due process and proper transparency?