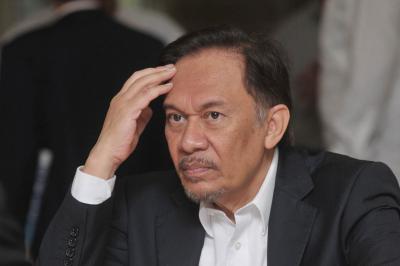 News has emerged in London that Malaysia’s imprisoned opposition leader Anwar Ibrahim, who is 67 years old, has been suffering a potentially life threatening medical condition, but that appropriate medical attention has been denied.

The failure to provide proper medical attention to prisoners is a flagrant violation of the basic rights of prisoners and in this case those close to the politician say the delay could be critical.

“He needs to go into the hospital, because he has been suffering some internal bleeding, but they keep saying he must wait until a sufficiently secure area becomes available” an informant who is close to the situation told Sarawak Report.

Meanwhile, the political veteran, who is enduring his third period of long-term imprisonment on clearly politically motivated grounds, is said to be rapidly losing weight and to be suffering from his extensive isolation.

He is only allowed to see his legal advisors once a week and family visits are even more restricted – 45 minutes once every three weeks and with no physical contact allowed.

Friends and political colleagues find it extremely hard to maintain communications at all and amenities are very limited.  He is not allowed to write at all in his cell and he is only allowed to read two books a week.

He has told family that his conditions are even worse than when he was previously imprisoned, with guards being regularly changed whenever he strikes up friendly relations.

Anwar is also prevented from talking freely with other prisoners, unlike before.

Concerned relatives have now been told that it is ‘hoped’ suitable hospital conditions will be found next week, so that the opposition leader can be properly examined.

He has lost 5 kilos since he was incarcerated in March, he has developed anaemia and his blood pressure has rocketed.  It is believed he has been suffering from exhaustion, partly brought on by the heat in a poorly ventilated cell.

Anwar is also thought to be fearful of eating the prison food, because the last time he was jailed he was found to be suffering from severe arsenic poisoning.

The politician, who has suffered a long term back condition is being kept in a single cell.

Initially he had only a two inch thick mattress on the floor.  Although he was moved to a bedded cell following protests, he found it so hot he has been sleeping on the concrete floor and it was only after he suffered from cockroach bites that he was finally provided with a fan.

However, his over all health is now extremely poor his family says.  One medically qualified observer told Sarawak Report:

“His symptoms of malaena are indicative of a bleed in the gut.  With no medical intervention forthcoming since the last three weeks of first complaint to the prison authorities he appears paler than usual.  He doesn’t appear himself, has lost extensive weight and appears more lethargic than usual.  Certainly, with malaena, his age and risk factors, he should be seen by a gastroenterologist immediately to rule out a gastrointestinal bleed and/or any malignancy requiring urgent medical attention”

Anwar’s imprisonment after winning the majority of votes at the last election has already been a focus for international condemnation and there has been increasing concern about such apparently gratuitous mistreatment of Malaysia’s most prominent political prisoner.

Having driven through an appeal against an original acquittal, due to lack of evidence on charges of sodomy against Anwar, the PM reportedly deliberated for weeks over whether to instruct a ‘guilty’ verdict.

He was eventually motivated to go ahead by the political danger posed by Anwar’s imminent capture of the key post of state leader of Selangor.

Government press releases were issued simultaneously with the announcement by federal judges of the guilty verdict, justifying the grounds of the conviction.

The jailing has been followed by a widespread ‘crackdown’ against pro-democracy activists and political opponents with a series of charges and arrests.

Nevertheless, earlier this month, Anwar’s wife Wan Aziza convincingly won a by-election in the PKR leader’s vacated seat with an almost identical majority to his own win at the last election.

At another by-election on the same day however, Najib Razak’s BN coalition saw their own majority slashed in one of their stronghold seats, where a sympathy vote had been expected after the death of the sitting MP in a helicopter crash on his way back from one of Razak’s daughter’s series of lavish wedding ceremonies.

The restrictions surrounding the imprisoned leader have ensured that there has been limited news of his condition and treatment, apart from rare moments such as his release for his father’s funeral.

However, disapproval even amongst BN’s upper echelons and in Malaysia’s establishment is believed to be extremely widespread:

“The day he put Anwar back in jail was the day Najib lost the support in most royal circles” one well-connected insider told Sarawak Report. “It has not helped that his own family has just indulged in by far the most lavish wedding ever seen – far grander than anything the royalty themselves would ever dream of.  It just is not proper”.

The sense of ‘dirty tactics’ and undue interference has further developed with the growing public concern about the raiding of the public finances, which are still failing to be properly addressed in the case of 1MDB, and the flagrant spending of Razak’s wife, Rosmah Mansor, who is seen to wield undue power and influence.

Anwar’s family recently presented a plea for a pardon from the King, based partly on their father’s health and age. But Sarawak Report has learnt that a decision was made and announced by a government minister, before the Agong was given a chance to review the matter himself.

Senior supporters of BN are starting to discuss whether Najib’s treatment of his main political opponent is more a sign of his weakness than of strength, as he battles criticism over 1MDB from his predecessor Dr Mahathir.

The on-going crackdown in the country, designed to counter the slide in support for BN, has already seen the country plummet on world human rights indices.

And this poor image has been compounded by the emerging news about the country’s appalling  treatment of migrant workers and refugees, including thousands of fellow Muslim Rohingya refugees, who have been turned back out to sea on broken boats and then lost.

Mass graves have in the past week also been discovered in the norther border region, which were apparently dug in an attempt to cover-up the systematic and deadly abuse by human traffickers, believed to be closely working with local police officers.

Such issues, along with the plight of plantation workers, have until recently failed to noticeably perturb the ruling classes in Malaysia, who have appeared more preoccupied with holding on to their own positions of power and privilege.

But, the situation is becoming too serious to ignore, some in authority are starting to say and the same appears to be also the case with the plight of Malaysia’s most famous political prisoner.

“If he dies because he was not given treatment, that’s murder” someone close to Anwar told Sarawak Report, “and the world will know who to blame”.