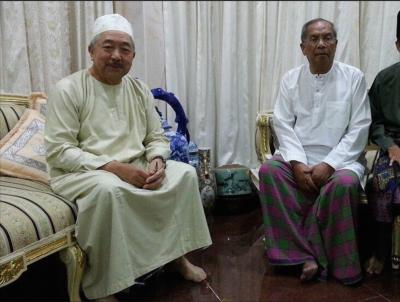 The government practice of appointing so-called ‘main contractors’ to ‘project manage’ major developments has quite rightly raised considerable criticism in Malaysia and Sarawak.

Particularly when these middlemen have been appointed without any open tendering for the job.

This is because it has become a great way for politically connected companies to skim off vast tranches of the public money awarded to government projects, before sub-contracting the jobs to actual construction companies.

The Sarawak DAP leader YB Chong has raised the issue with regard to the massive Pan Borneo Highway contract, which he says has been secretly negotiated to a previously unheard of outfit in true “Ali Baba” style:

“While the chief minister is preaching integrity and transparency and that the state cabinet ministers have signed the so-called ‘Integrity Pledge’, why is the contract worth more than RM10 billion awarded without open tender process?”, he questioned last week. He continued:

“While LBU [Lebuhraya Borneo Utara Sdn Bhd] has only been registered in 2011 and zero track record in construction and any trading activity, why was LBU appointed as the main contractor? Is the government intending to continue with the ‘Ali Baba’ modus operandi in the implementation of its projects,” [YB Chong Chieng Jen April 19th]

Chong has also questioned why it is not a Sarawak controlled company that has received the juicy contract for the state, but the apparently Malay-dominated Lebuhraya Borneo Utara?

Yet in this he may be deceived, since Sarawak Report has evidence of a hidden Sarawak connection after all.

The Minister for Public Works is Fadillah Yusuf, one of the Sarawak MPs who got plum jobs in Najib’s post-2013 cabinet as a reward for delivering the seats that kept BN in power (he also keeps a local handle in Sarawak as the PBB ‘Youth Chief’). 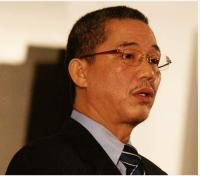 Fadillah’s family has been extremely powerful and rich in the state ever since his brother, Bustari Yusuf, made the move to back Taib Mahmud against his uncle in the 1980’s in a political battle that set the power structure for the next three and a half decades and continues to do so.

Bustari became the Treasurer of Taib’s party PBB (he remains branch chief in Sibu) and was simultaneously awarded vast timber concessions in the state.

His family’s business empire then began a trajectory from which they have never looked back, while his brother moved conveniently into the field of politics to become one of Taib’s key ‘yes’ men in government.

These include KACC construction, which has received a staggering number of government contracts worth hundreds of millions over the years and OBYU Holdings Sdn Bhd, which has a large web of interests in property and plantations.

The Bustaris also have an interest in Austral Plantations, which has received fat plantation concessions from the state government and federally Bustari controls one of Malaysia’s largest energy companies Petra Energy: 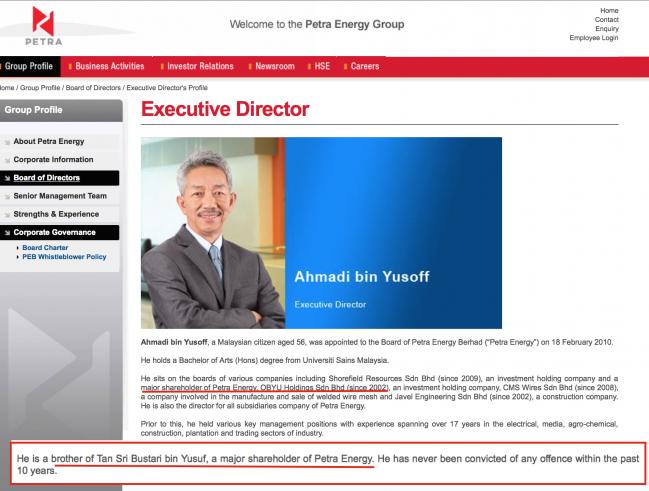 All in the family – brother Ahmadi is the Exec Chairman, while Yusuf is the main shareholder

Interestingly, many of the Yusuf family’s state-connected business enterprises have intertwined with the family of the Deputy Chief Minister, Alfred Jabu, who has delivered key Iban votes to the minority Melanau dominated administration run by Taib.

Jabu’s offspring, Bustari’s offspring and Fadillah’s offspring have shared the spoils as company shareholders in a number of key concerns, as previously pointed out by SR.

Behind it all remains Taib, the giver of all bounty in Sarawak for decades, followed by his close ally and successor Adenan, who is also known to be exceedingly close to the Bustari family (Bustari Yusuf’s travel company has organised the fares for the chief minister and his family on their current trip to the UK this weekend – a service he has also regularly provided to other key political travellers).

Now wealthy beyond measure Bustari Yusuf has continued his career into West Malaysia, by making close allies also of the present Prime Minister and his wife Rosmah, who is known to be extremely friendly with Mr Yusof. 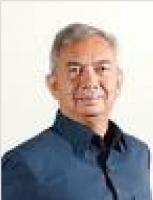 Indeed Rosmah and Yusuf go back a long way, say insiders, having formed a very close relationship indeed back in their youth, when they both worked for the developer Island Peninsular Sdn Bhd.

His company Petra Energy (the happy recipient of huge oil contracts) has a key shareholder in Najib’s own brother.

Nizam, who is married into Taib’s uncle Rahman’s family, also has a privileged position amongst the Sarawak Malay elite, who control the state’s BN coalition through the support of a select group of key Dayak leaders.

So, what of the mysterious and highly contentious contract given by Public Works Minister Fadillah Yusuf to a little known company to manage the contracts for the Pan Borneo Highway in Sarawak? 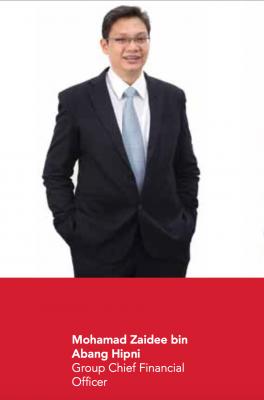 Bustari’s nominee? Hipni has been a longstanding employee till he suddenly moved to LBU just before it was awarded the Pan Borneo contract

Chong was roundly criticised for suggesting it was a crony contract.

Therefore, who are the shareholders and directors of Lebuhraya Borneo Utara Sdn Bhd and why might they have been allocated control over this RM15 billion contract without a tendering process by the Fadillah’s Public Works Department?

It turns out that a Director and also the largest overall shareholder of Lebuhraya Borneo Utara is one Mohamad Zaidee Bin Abang Hipni, who was brought into the company 2nd December of last year.

Mohd Zaidee bin Abang Hipni owns 40% of Multimur Resources, which in turn owns 55% of Lebuhraya Borneo Utara, meaning he owns 22%% of the overall company.  There are six other beneficial owners. 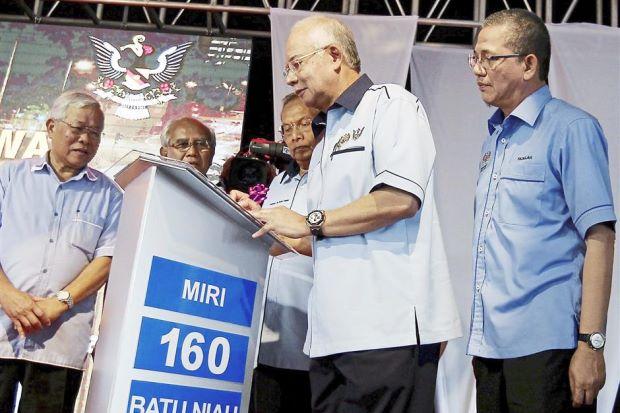 So who is Mohd Zaidee Bin Abang Hipni, since insiders have told Sarawak Report that he is the nominee of Fadillah Yusuf’s brother Bustari?

In fact, Mr Zaidee bin Abang Hipni was, until just before the awarding of the Pan Borneo turnkey contract to LBU, a long-standing employee of Mr Bustari Yusuf.

He acted as the Financial Director of Petra Energy stepping down only on December 3rd last year, the day after he became a Director at LBU. 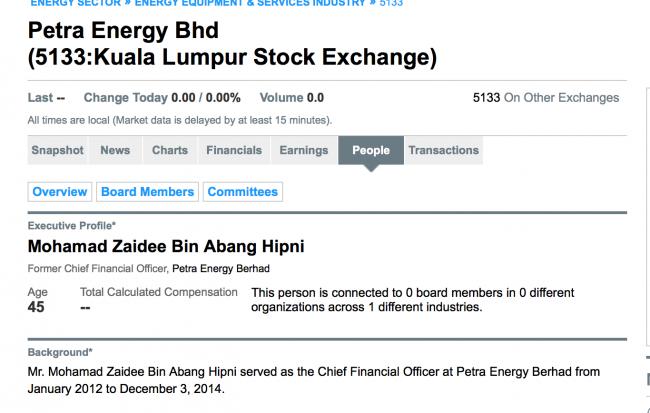 Bustari’s former employee became the Director and major shareholder of the Pan Borneo Highway contract winner just weeks before the announcement of the award.

Before he worked at Petra Energy Mr Mohamad Zaidee Bin Abang Hipni had worked for many years as at OBYU Holdings Sdn Bhd, which is also controlled by Bustari. 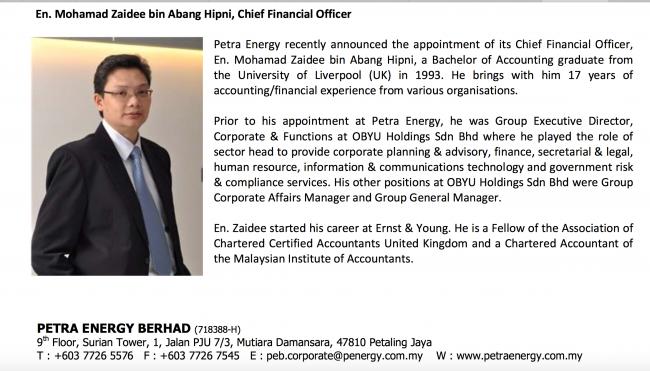 17 years of working for Bustari

OBYU Holdings Sdn Bhd is a major investment company based in Sarawak that was started soon after Taib took power in 1983.  Bustari Yusuf has been its Executive Chairman since its incorporation:

YB Chong’s complaint that this was a crony contract is therefore clearly borne out, despite the chorus of condemnation by BN allies of the Yusuf brothers.

How otherwise can it be explained that the long-term employee of the brother of the Minister of Public Works stepped down to take over a new and little known company just weeks before it was confirmed that the Minister had awarded that company a massive surprise contract of this nature?

Why would Mohd Zaidee bin Abang Hipni take such a risk, resigning from a good job after working for two decades for Mr Bustari Yusuf in order to move in charge of a new company with no track record in anything, unless there was something he knew?

Should not this former employee be required to demonstrate first that he was not acting on insider knowledge and according to a plan?

And second to prove that he is not in fact still working for Mr Bustari?

Elected representatives have a right to ask about this apparent blatant conflict of interest and the absence of a proper open tendering process in such an enormous contract.

Yet, when the Sarawak DAP opposition leader queried such matters and asked how much profit Lebuhraya Borneo Utara could expect to make out of its control of the entire budget and allocations of contracts to sub-contractors on the motorway, he was shouted down in fury  last week in what was described as a ‘ruckus’ in the Sarawak DUN Assembly. 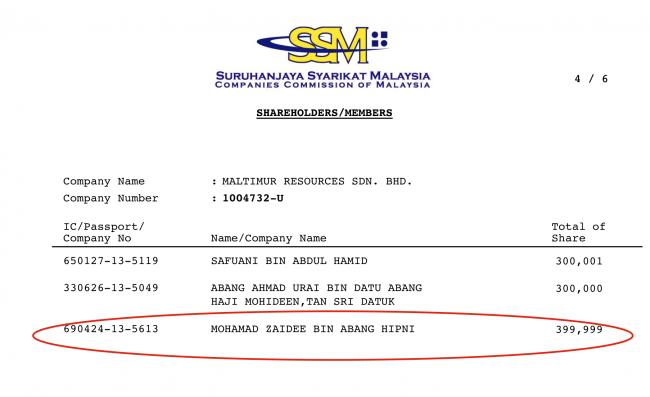 Top shareholder in the main company behind LBU is Hipni. Another major shareholder is a political pal of Bustari’s the former Sarawak State Assembly Speaker Abang Ahmad Urai

This was a Federal contract, thundered BN’s infrastructure Development and Communications Minister Michael Manyin, ignoring the distinctly Sarawakian flavour to the deal. 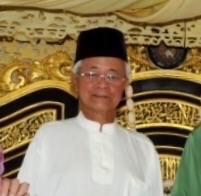 Another major 16.5% shareholder of Lebuhraya Borneo Utara (LBU) is the ex-Assemblyman and Speaker of the DUN, Abang Ahmad Urai, who is known to also be a very close friend of the Yusuf brothers.

Yet, Manyin insisted Chong should not raise such matters locally with him, since none of these Sarawak cronies, who had been awarded a contract by the state PBB Youth leader, had anything to do with the local political scene.

Moreover, complained the state minister, it was ‘stupid’ to ask how much this ‘project management’ company could expect to make out of its handling of this public contract, because how was anyone to know?

“How could I know how much profit? It’s not for me to answer. Stupid. This is stupid. It’s (highway) not done yet … If you have not started the project, how could you know how much is the profit? That is stupid,” he said [The Star]

Others, of course, might find it stupid for a government to award the management of such an enormous contract to any company without this important detail being nailed down to a precise figure with legal penalties in place were a sen more to go astray.

Indeed, in spite of the spluttering anger and outrage from BN MPs, Sarawak’s own professional bodies have also come forward with a strong complaint about the way this project has been awarded.

A statement by the Sarawak Building and Civil Engineering Constractors Association (SBCECA) last week exactly reflected the points made by YB Chong, saying that on past experience the awarding of behind doors ‘project management’ contracts of this nature have been seen to inflate the costs of projects “by at least 30%”.

“SBCECA urges the Government to ensure all future projects are openly tendered and awarded to the lowest qualified tenderer in a transparent manner,” its chairman Lau Kah King said in a statement.

“Open tenders will save the Government at least 30% in construction cost. ‘Selected tenders’ and direct negotiation procurement methods, not only cost more to the Government, it also doesn’t guarantee timely completion and better quality,” Lau said.

30% of RM15 billion is RM4.5 billion – is this what the contract to this Yusuf related company LBU is worth?

What right has BN to be angry when such matters are challenged on behalf of the public interest and why have not the connections of the shareholders of LBU been examined for graft in favour of a political crony, who is close friends with both Malaysia’s PM and Sarawak’s new Chief Minister? 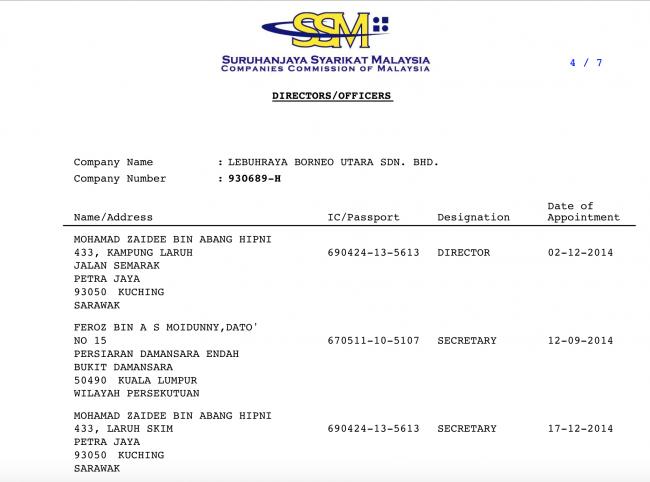