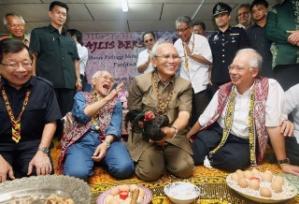 Do these Dirty YBs really represent their longhouse communities or their fellow plunderers Taib and Najib Razak of Malaysia?

Over the past few days we have exposed some of the corrupt hand outs that have benefitted BN’s Dirty Datuks.

But, once someone has embarked on cheating their people to get rich, they don’t stop.  They keep looking for more.

So, we can now present some more of the corrupt sources of income that explain the extravagant wealth of three of these BN politicians, DCM Alfred Jabu, Fadillah Yusof and MP Billy Abit Joo, which contrasts so painfully with the poverty of their constituents.

Stealing from their own people 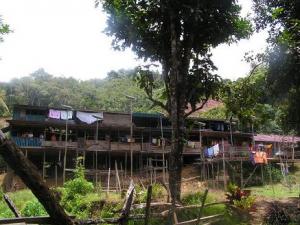 Fruits of development - a longhouse in Betong

It is indeed remarkable that so much of the plunder that has been carried out by BN YBs has been against their own people in their own constituencies.

It seems a BN YB likes nothing better than to champion the ‘development’ of their constituency, through land grabs, logging and plantations, so that they can exploit their political influence to steal as much of the profit as possible!

What BN YBs never do is work to make sure that a fair share of those profits go back to their own native communities, who have 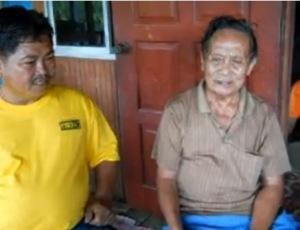 BN don't even always pay up - this headman was never paid his RM5,000 bribe for getting his longhouse to vote BN!

lost their lands and their living to the so-called ‘development’.

After all as Najib Razak famously warned:

“do not tell these people what they do not need to know”.

By which he meant it is better to keep these people poor and ignorant so that they remain happy with RM50 at election time and do not realise the value of the trees and the land which we have stolen.

These BN YBs think that they can keep the communities obedient, as long as they pay small salaries and kickbacks to the local longhouse chiefs, whom they can threaten with penalties and job losses if they allow their people to vote against BN.

This was the point of Wargana Consortium, which Awang Tenggah alleged was owned by the people of Bakun, but which turns out to be owned by MP Billy Abit Joo and his business cronies, along with one share each for local headmen.

Likewise Jabu has amassed a vast series of plantations, which he has put into the hands of his family, much of which is Native Customary Land, snatched from his local people in his local region of Betong. 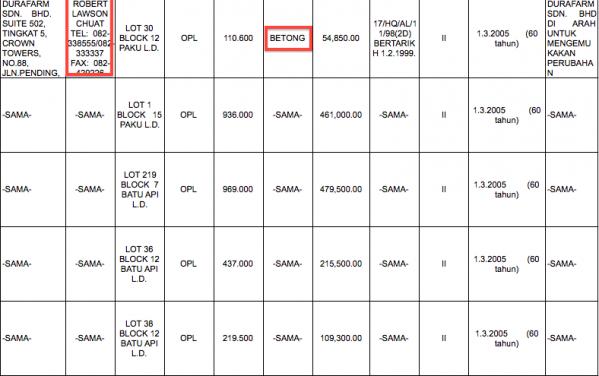 Jabu's nephew, Robert Lawson Chuat was the contact for Durafarm and still holds a large share of the plantation. How much did WTK pay to take it over?

The company Durafarm was put in the hands of Jabu’s nephew, Robert Lawson Chuat and has now been taken over by WTK.

Robert Lawson Chuat is, of course, the local YB for Bukit Saban. How much did this crony timber and plantation company pay to Jabu in the process, we wonder, and what clearer example of the local BN representatives taking advantage of their own constituents? 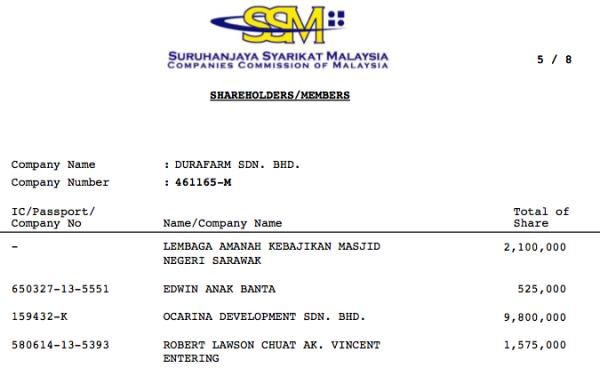 Local BN YB, Jabu's nephew Robert Lawson Chuat, and a supreme council member of the Dayak Chamber of Commerce still have shares in land taken from their local people. How can this be?

Ocarina Development (above) is one of the companies owned by Taib timber crony, WTK’s Wong Kie Nai.  But look who else gets a nice slice of shares, Edwin anak Banta of the Dayak Chamber of Commerce.  Once again it is Taib’s key ‘yes men’ who get the benefits out of the impoverishment of the Dayak people!

YB Robert Lawson Chuat is of course also the Director of the company KACC Construction, which we have exposed for corruptly receiving HALF A BILLION ringgit worth of state contracts in recent years.

Other shareholders are Jabu’s own daughter, Jennifer, and the family of another Federal MP Fadillah Yusof.

Has anyone explained to these greedy BN YBs that it is a highly corrupt conflict of interest for elected MPs to be involved in any way in companies that are receiving state contracts and lands that have been taken from their own constituencies!?

And is it any surprise that another company, the similarly named Durayield, has the same line up of Directors and Shareholders from the same two political crony families of Jabus and Yusofs?

Durayield has a big share of a huge timber concession called Sarako, so look who owns the company.  Once again it is Jabu’s nephew state assemblyman, Robert Lawson Chuat, and his brother, the longhouse headman Richard Mulok Entring. 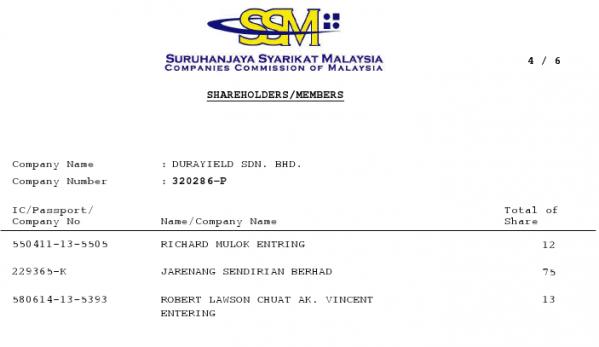 Nice fat timber concession to keep the DCM's family happy. Next put them into key jobs as YBs and headmen. Next tell the longhouse folk they will be reported if they speak to the opposition!

There is one other major shareholder, a company called Jarenang Sdn Bhd.  Interested to know who owns that? 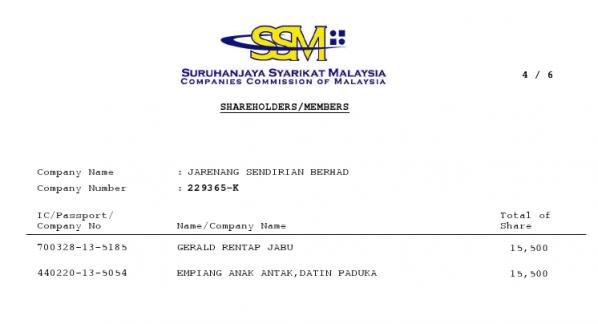 It turns out that Mrs Jabu and her son Gerald are the owners!  And what about the rest of this lucrative timber concession?  Well it turns out that a nice chunk of shares has been handed out to each of Jabu’s family members and also to Bustari Yusof, brother of MP Fadillah Yusof! 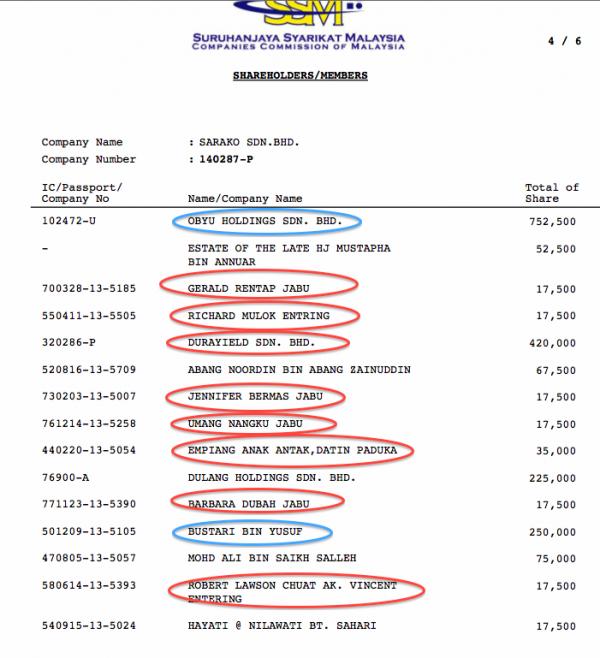 Millions of ringgit worth of timber money from this 36,000 hectare concession have gone to the Jabus. What have their constituents got?

And guess who owns a Obyu Holdings?  None other than the same favourite political and business partners of the Jabus, the Bustari family! 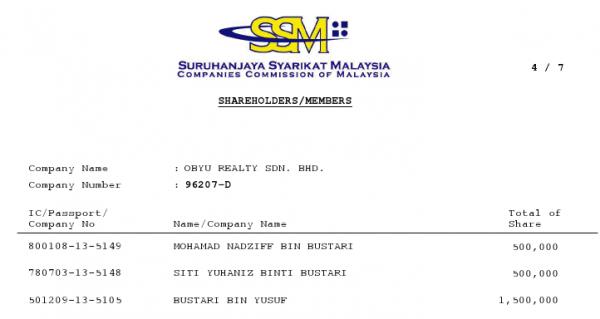 Taib nominees? The Bustari family have a nice chunk of this timber concession!

Jabu is fond of lecturing longhouse folk to beware of the opposition.  Perhaps it is time for them to realise that they should beware instead of their wealthy YBs.  Because once a politician has started stealing from their people they will always come back for more!

More land grabs for the Jabus

They should consider the huge lands handed in Limbang to the company Utahol Sdn Bhd.    The opposition leader and human rights lawyer, Baru Bian, is fighting a land grab case for his people there. 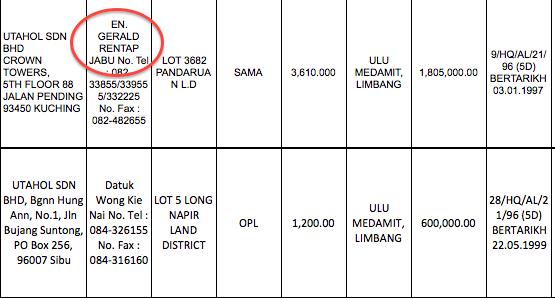 This time it is Jabu's son Gerald who has charge of the plantation!

The plantation was originally handed to Jabu’s own son, Gerald Rentap Jabu and then, once again, was passed on to the control of WTK.  Look who owns Utahol. 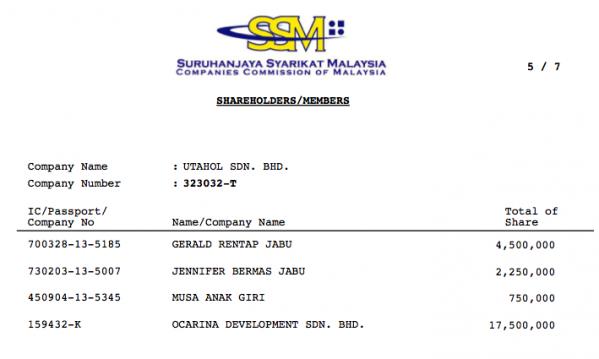 More for the Jabus - this time a vast plantation taken from NCR land in Limbang, where they still have juicy shares

And then of course lucky Gerald Rentap managed to catch the state government’s eye with the grant of yet another massive plantation under the company Herba Aromatics.  Once again this company has taken lands right from under the noses of the Jabu family’s own people in Betong!

More of Jabu's constituents land is handed over to his son!

If Jabu once set out to represent his people’s interests, it is clear that greed has now got the better of him!

Golfer! Life came easy for Gerald Jabu, who has been handed vast lands that once belonged to the people of his Dad's constituency

Gerald Jabus’ CV describes him as an experienced land and property developer and as a former licensed dealer in Sarawak Securities (the Taib company that got the only stockbroker’s licence in Sarawak).

He has of course also managed to benefit from big state contracts, despite the obvious conflicts of interest!

The company used for this process, is owned by himself and his sister, who have apparently been able to add expertise in construction to their expertise in plantation management, timber extraction and also of course finance. 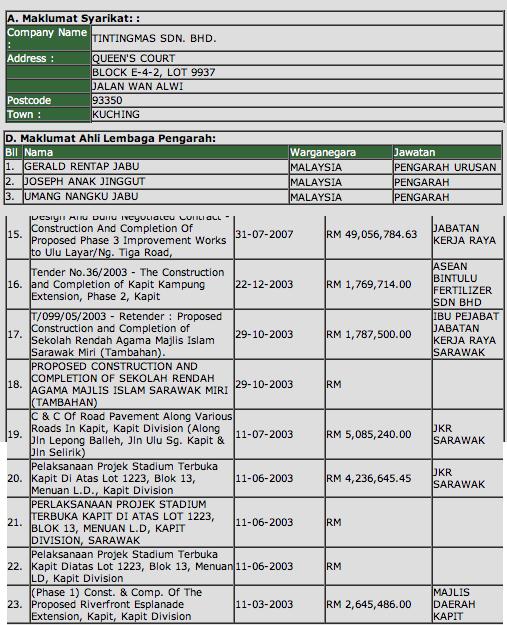 Tintingmas Sdn Bhd has picked up no less than RM63 million in state contracts for these lucky Jabu offspring in the state of Sarawak!

The Jabus’ business and political partners, the Yusuf family have also done staggeringly well out of contracts handed to another company they own, called Javel engineering! 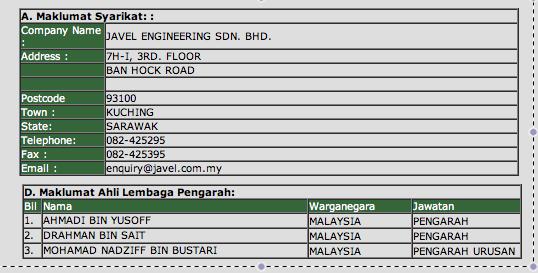 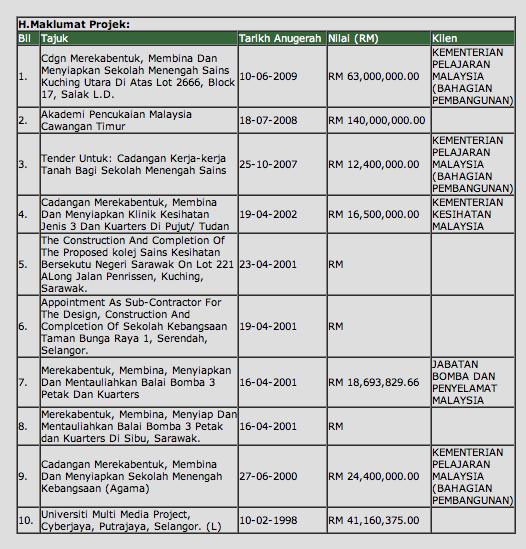 Over RM300million in contracts for Javel Engineering owned by the Bustari family - so close to Taib Mahmud!

The message comes loud and clear, it is very lucrative to take Taib’s offer to become a BN flunky!  But, if this is the sort of money being made by flunky MPs, how much do we reckon is going to Taib himself from these contracts?

And why is it that these greedy men who have abused their positions to get contracts have found fit to spare nothing for the local people whom they pretend to represent?

Likewise, Federal MP Billy Abit Joo has not just contented himself with massive timber concessions and stealing control of his local people’s ‘cooperative’, Wargana Consortium. he too has set up a company to take on more state contracts, despite the corrupted conflict of interest this represents.

Readers of Sarawak Report alerted us to the company, which is called Sarabrand Sdn Bhd. 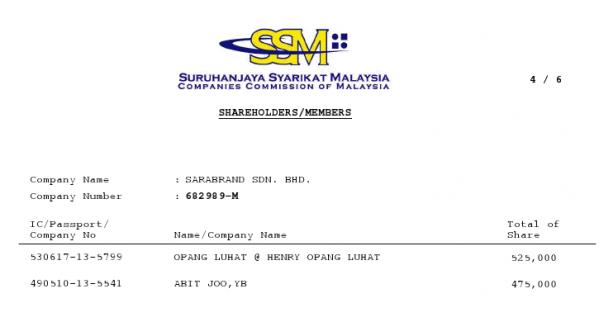 Company Director and MP all at the same time! - ready to receive fat state contracts of course..

Sure enough Sarabrand Sdn Bhd has received a goodly amount of contracts handed out by the state under the guise of ‘bringing development to the people’. 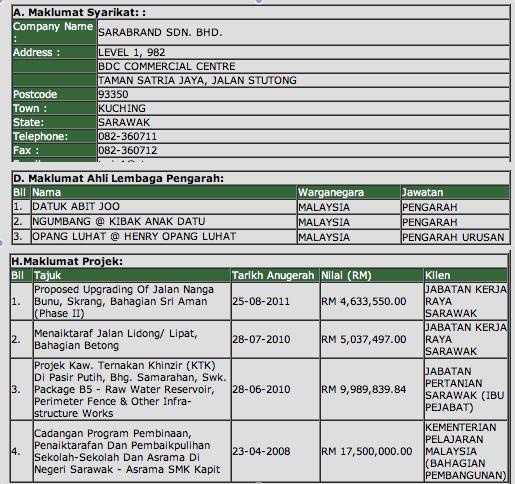 Over RM35million in state contracts for Billy's company

No wonder Billy Abit Joo says he wants to hang on as the MP for the Bakun area.  He must surely have his eye on all those future possible contracts, that will, of course, be branded as ‘helping his people benefit’ from the dam!