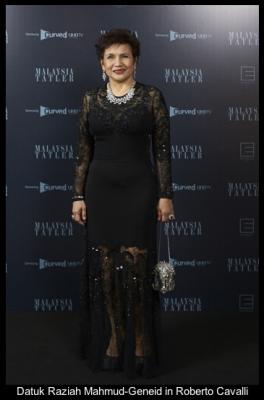 The Taib family are far from coy when it comes to flaunting their riches.

Taib himself is recognisable by his chauffeur driven Rolls Royce and walnut sized gems and his wife is often photographed dripping in jewels.

But this month’s Malaysia Tatler Ball gave Taib’s tycoon sister Raziah Mahmud-Geneid and her family a fresh chance to boast and gave us a reason to remind you just where the money came from.

Having sold off one of their million dollar properties in Sydney earlier this year, the Geneids have been partying in designer Valentino and Cavelli dresses and suits with Malaysia’s high flyers this month.

Tatler previously described Raziah as “a frequent traveller, flying round the world to wheel and deal” and has now branded her part of the “Tatler Tribe”.

Describing this month’s ball, the Tatler website boasts that:

“After walking the red carpet, guests were ushered into a resplendent cocktail area that dripped of sophistication with black drapes and tablecloths. Following the cocktail reception, distinguished guests adjourned to the grand ballroom for the dinner party where they wined and dined on the finest haute cuisine, a scrumptious 5-course gourmet dinner.”

The Taib family have a particular penchant for displaying their wealth.

However, recent claims by the Governor’s London lawyers that the family enjoy inherited wealth are wrong. 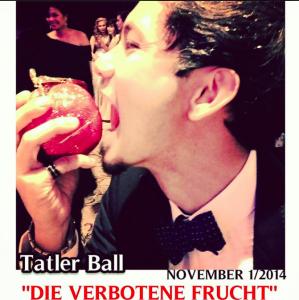 Cousin Yakub (son of Tufail Mahmud) boasts his own presence at the ball by “eating forbidden fruit” – would that be from stolen oil palm plantations?

When Taib, his sister Raziah and 9 siblings were young (i.e. before he entered politics) their family was dirt poor.

We have previously exposed how Raziah and her husband Robert Geneid themselves became rich, thanks to brother Taib’s lucrative state concessions, all at the expense of Sarawak’s indigenous communities.

Similar plundering has been carried out by Taib’s other family members, his children and brothers like Tufail, Onn, and Arip in particular.

Robert Geneid, a Lebanese Australian, has fought back against the various exposes of his dubious gains at the expense of Sarawak’s natives by investing in a number of websites, in which he portrays himself as a business “philanthropist” and “ecologically sensitive”. 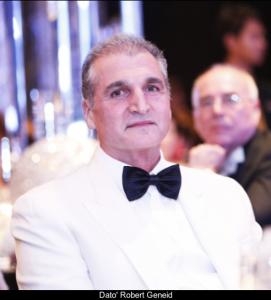 So where did the money come from?

As well as benefitting from huge state construction contracts, Raziah and Robert have been granted thousands of hectares of oil palm plantation in Sarawak, none of which are mentioned on Mr Geneid’s online websites.

Much of this was Native Customary Land.  In Sebangan we exposed her company Quality Concrete for attempting to illegally force locals to surrender one of these concessions for a pittance of just RM250 per family.

The courts ruled against this ploy by Quality Concrete and in 2011 the company was ordered by the Kuching High Court to pay the natives of Sebangan RM160,000 for encroaching on 3,305 hectares of NCR land. 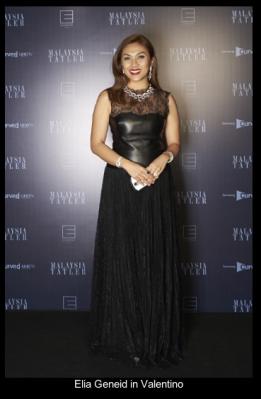 Despite Robert Geneid insisting that he handles the area with “care and attention” and “works with local communities”,  the construction of the hotel was responsible for the forced acquisition of native lands from indigenous Berawan communities in the state.

This year, along with a string of judgements in favour of native rights against the State Government run by Raziah’s brother Taib Mahmud, the high court concurred that the land for the Mulu Resort airport was illegally confiscated from the Berawan without compensation.

Yet, despite warnings from this website and others, this hotel is set to become part of the Marriott group as their first ever ‘nature resort’.

It is a mistake that Marriott is likely to eventually regret.

WARNING – Do not ally with the Taibs if you are seeking eco-credentials!

Meanwhile, the rest of Raziah’s family has also been tucking into the riches of Sarawak, as if they owned them.

And thanks to the booty they were also there flaunting the proceeds at Tatler’s tacky KL ball. 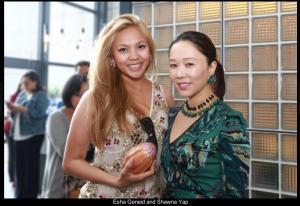 Elia Geneid, Raziah’s eldest daughter (clad in a Valentino gown worth RM26,000) was, for example, granted 9,320 ha of palm oil concessions on NCR land in Bintulu by her uncle’s so-called Land Custody and Development Agency.

And her sisters are equally happy to be seen in the ‘high society’ of such events displaying wealth plundered from the public.

After all, if anyone still wonders how all these dresses and jewels are paid for, we recently highlighted how 17 Bidayuh villages from Sarawak came together to protest against another company owned by the Geneid family who have grabbed their sacred land on Mount Serumbu.

Marriott Hotels should therefore stand on notice, as they gear up to advertise their ‘eco-resort’ and welcome tourists to their ‘jungle paradise’.

There is plenty of information at hand for those who will be advising those tourists that these claims bear no relation to the truth about Sarawak and the owners of Mulu. 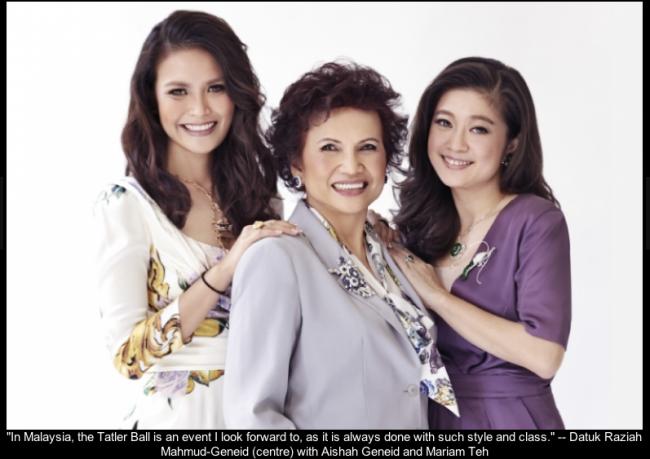 Raziah Mahmud, one of the “Tatler Tribe” – but you can’t buy class