Stand Up For Your Rights - A Win For Sebangan! 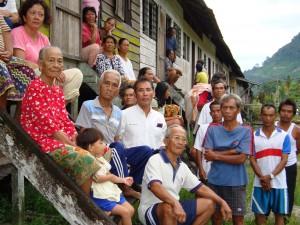 Sarawak Report visited the people of Sebangan back in 2010. They said "No" to Taib and they won!

Today the Iban communities of Sebangan are celebrating yet another victory against Taib and the BN government of Sarawak.

These people own the rights to one of the last remaining areas of un-destroyed rainforest in the region north of Kuching.

However, Taib’s greedy sister Raziah could not bear to think of those trees still left standing, when she could add to the hundreds of millions that she has already squeezed from Sarawak by cutting them down.

So, in 2010, she and her fellow directors of the firm Quality Concrete set about tricking the natives out of their lands, by using the same methods that have been employed all over Sarawak for decades.

On the Board - by making 'businesswoman' Raziah one of their Directors, Quality Concrete felt certain they would be able to push through their land grab

The conspirators began by approaching Taib’s ‘Yes Men’ at the Forestry and Land & Survey Departments and getting them to agree to provide a ‘Provisional Licence’ to cut the area down.

The Provisional Licence is what is supposed to get the state government off the hook when it illegally hands Native Customary Lands to BN cronies for logging and plantations.

By this means the officials can pretend that they were offering permission for logging, but only if the natives were happy about it and entered into an agreement.

However, of course, when companies like Quality Concrete go down to the area they wave these licences at the local people and pretend that the government has given them ‘permission’ to go ahead and take the forest and the land.

And with Raziah Mahmud, Taib’s own sister, on their Board, Quality Concrete could make clear that the whole power of the Chief Minister would be behind their naked attempt to snatch the land. 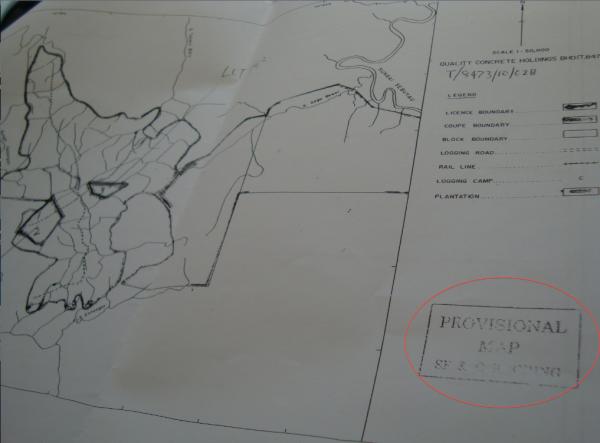 Raziah and her greedy fellow directors at Quality Concrete didn’t even wait for a decision from the headmen before they started grabbing the trees.  The first thing most of the natives knew about the whole scheme was when the bulldozers started arriving and driving through a road and setting up a camp in the middle of their area! 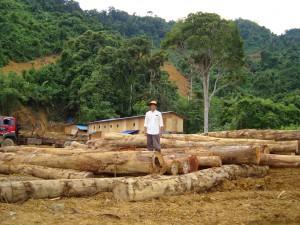 When the people started to protest, expensive lawyers arrived, showing them that they had ‘permits’ to take their land and implying that it would be pointless to protest, because Quality Concrete were backed by the government.

After all, who could expect to fight a company owned by Taib’s rapacious sister, the notorious Razia Mahmud, who even controls the Bomoh who influences the ageing Chief Minister’s every move?

But Quality Concrete also planned to tempt the impoverished landowners.  Each family, they explained, would be paid for their land with the handsome sum of RM250!

Raziah Mahmud would not dream of purchasing a pair of shoes that cost so little as RM250 (£50UK/$80US)!

By contrast, the money that she stood to earn from cutting down these trees would have amounted to hundreds of millions of ringgit, given the rare hardwood of the area.  She wanted to cheat these poor natives and their future generations out of their one asset and destroy their area and their livelihood.  All in return for just RM250 per family! 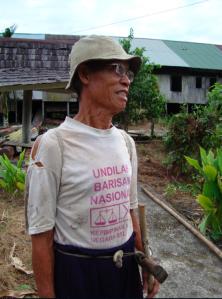 No wonder Taib Mahmud lectures the local people of Sarawak about how the pace of development has to be slow, when he and his family show such greed and give nothing back to help the people!

However, this time the greedy Taibs found they had a battle on their hands. Some people in Sebangan were indeed sorely tempted to take the miserable sum of money in return for surrendering up their valuable heritage. After all, Taib has deliberately kept them poor and ignorant.

However, there were many others who realised they were being cheated and who wanted to keep their beautiful heritage.

Sarawak Report was invited to the kampungs and the headmen explained how the area has been destroyed by oil palm.  Fertilisers and pesticides have polluted the river, which is now clogged with weeds and no longer clean.

The animals have disappeared and the only area left for hunting and foraging are the few hectares of primary jungle still remaining on the hills behind their villages:

‘”We have trees so big you need five men to hold hands to reach around the trunk” explained one headman.  “We want to keep these areas for our future generations so that they can manage it carefully and harvest prudently” 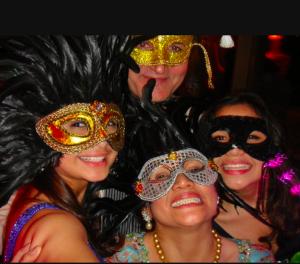 We need more money to party! - Raziah and her daughters are notorious spendthrifts with the money made from Sarawak's native lands

But such prudence and wisdom was clearly of no interest to multi-millionaire ‘businesswoman’ Raziah Mahmud.

She and her latest husband Robert Geneid have grabbed lands amounting to more than the entire landmass of Singapore in just the past few years and have exploited huge plantation concessions.

They have also received hundreds of millions in state contracts through their companies, thanks to her brother and they have benefitted from handouts of valuable urban development areas as well.

The couple have already seized native customary lands from plenty of other tribes, most notoriously the Berawan people of Mulu, who were forced to surrender up their territories for the ‘eco-resort’.

Mulu has now been taken over by the Marriott Hotel chain and the Geneids clearly believed they could keep on taking just whatever they like of Sarawak.

So, it is of little surprise that Quality Concrete fought back hard against the determined resistance of the headmen and their followers who protested against them.  They thought they could bully their way to grabbing the land. 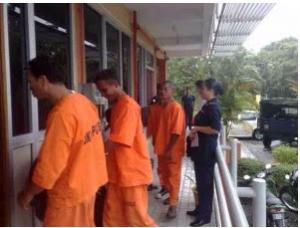 The first move was to organise the arrest of the main people identified with the protest.  The SADIA (Dayak Iban Association) organiser Nicholas Mujah and former Shell employee, Numpang Suntai, had been identified as particularly effective campaigners, who were raising funds for the village to mount its own legal case led by the native rights lawyer and PKR leader, Baru Bian.

So, after a mysterious fire broke out at the logging camp, police arrested these two men as the chief suspects.

This was in spite of the fact that neither had been anywhere near the fire at the time of the incident!

Both were incarcerated in a typical strong-arm Sarawak tactic against ‘troublemakers’.  However, these brave men were determined to stand up for their rights and refused such intimidation. 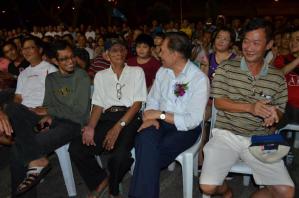 Proud father - Numpang Suntai's father, now in his 90s celebrates his village victory with Anwar at the weekend!

The growing internet traffic and Radio Free Sarawak means that this sort of bullying is now being exposed in Sarawak, whereas before it was not.  There are now also lawyers standing up for people’s rights.

The magistrates released the two men and shortly afterwards the courts also found against Quality Concrete, denying it the right to continue the logging.

And today the Kuching Court has upheld a further case by the villagers themselves against the State of Sarawak and the Land & Survey Department for allowing the seizure of their Native Customary Lands.

“This case is of great significant to encourage others to keep on fighting to hold on to our NCR heritage and the preservation of our precious rainforest” and she thanked all who had supported their campaign.

The people of Sebangan have proved that standing up for your rights is the only way to protect them from greed and plunder.  They are an example that all Sarawak natives should take note of.