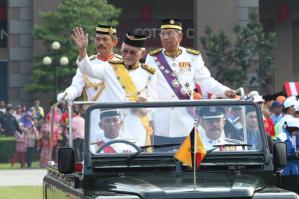 Fresh from his lavish ‘Birthday Celebration’ the vainglorious Governor and de facto Sarawak ruler, Taib Mahmud, has sanctioned the construction of a new museum, dedicated to himself.

“the museum will showcase the sacrifices of past and present leaders of Sarawak, including all heads of state and chief ministers…… especially Tun Pehin Sri Abdul Taib Mahmud”.

After all, Taib has been in office all of the 50 years since independence, 33 of them as Chief Minister.

Before him was his uncle.

So, to whom better should the state award this RM150million cement, glass and aluminium eye-catcher than the Taib family controlled company, Naim Cendera?

This way, the old boy gets to profit mightily from his own adulation, pleasing him on both fronts in time honoured practice. 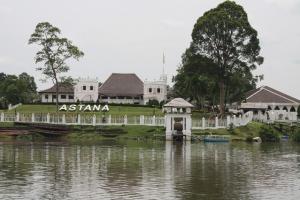 Historical elegance to be over-shadowed.

The proposed testicular shaped design is yet another fanciful Taib conceit, to be plonked like a space craft in the very centre of the capital’s open river bank, with no sense of history or its surroundings.

But, of course, Taib commissions buildings like his daughters snap up designer handbags.

They are guaranteed to be gaudy and the most expensive available – after all, he is usually the one being paid to build them!

The new complex is to be bang next door to Taib’s gracious and traditional state residence at the Astana, presumably so he can keep a close eye on the quality of the exhibits.

Other residents of Kuching were only informed of the done deal last week. 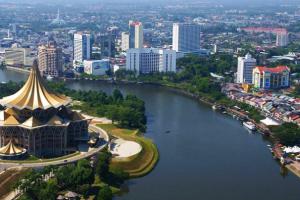 Kuching’s ‘modern jewels’, commissioned and built by Taib and his companies at public expense.

The public, of course, have no say over such issues as the likely clash of the silver coloured museum with the nearby golden coloured DUN Parliament building and bridge, built at even more enormous expense by that other Taib company, CMSB.

In fact, insiders have revealed to Sarawak Report that this whole project was first mooted within Naim Cendara itself, under the chairmanship of Taib’s cousin and key nominee, Hamed Sepawi.

Naim had originally put the idea forward as a ‘Corporate Social Responsibility Project’, which ought to have meant that it was bestowing this iconic gift on the people of Sarawak at its own expense.

However, along the way, the state government, dominated as it is by Taib and his brother in law Adenan Satem, decided to commission the whole project and pay Naim a fat fee instead!

So, if any other Taib controlled construction companies have got more great ideas for honouring Taib they should clearly be putting in suggestions now, so as to get their grants to build. 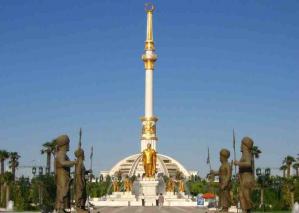 Inspiration for Taib? – Gold statues of Turkmenistan’s Saparmurat Niyazov (complete with soaring structures) still decorate his capital after his sudden death in 2006.

This has all left people wondering in Kuching as to what “sacrifices” are being referred to on the part of this leading family?

Abdul Taib Mahmud and his family have, after all, employed his entire period in office in the single-minded pursuit of enormous riches for themselves.

None are wealthier than Taib himself, recently acknowledged by his daughter in law to be one of the richest men on the planet.

The sacrifices, surely, have all been on the part of others and the wastage of the natural resources of Sarawak? 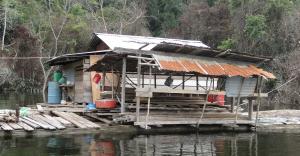 Scene of modernity? – The floating homes of Bakun where desperate tribespeople have returned to their old lands, destroyed by flooding.

An entire tropical jungle of immense beauty and scientific value has been laid to waste, without a thought of preserving any of its species or invaluable scientific information, so that the Taibs could cash in on the timber.

Likewise, native lands have been snatched and converted to oil palm, leaving communities bereft of their livelihoods and dispossessed, so that the Taibs could profit further.

Now, rivers are being plugged up and destroyed, so that the Taibs can cash in on mega-dam contracts and industrialisation projects.

The list could go on, but where is the ‘sacrifice’ involved for the Taib family and the crony leadership class of Sarawak, which has lived off the rich, if short-lived, pickings from this profligacy?

The real victims are the people

Of course, everyone in Sarawak knows full well where the real sacrifices have been made, in order to fund Taib and his latest follies.  It is the people who have been the losers.

Announcing the museum project last week, Minister William Mawan claimed that, thanks to Taib’s “modernising”, salaries had risen in Sarawak over the past half century, in line with inflation, from RM680 to RM40,000 today ie to RM3,333 a month. 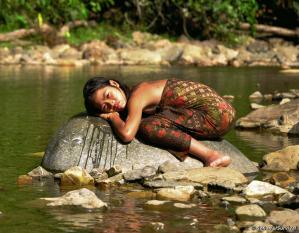 The Penan protested the destruction of their river in vain.

It is an interesting figure, given that the amount of compensation that the government controlled Sarawak Energy are paying the stranded Penan communities, driven from their territories by the Murum Dam is just RM250 per family per month, plus foodstuffs in kind and for merely 4 years.

The Taibs on the other hand have stood to make billions out of Murum and other dams, through their monopoly of cement; their privatisation of electricity cabling companies into their own possession and their grabbing of related concessions and contracts.

So, it is clear who has made the sacrifice in order to ‘modernise‘ Sarawak, but will there be a tribute in Taib’s museum to the Penan and all the other communities, whose present hardships have made him and all his family so obscenely and disgracefully rich?