Obama Needs A Longer Spoon To Dine With Najib Razak 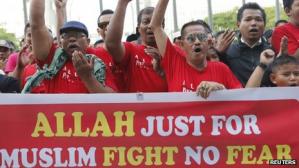 Perkasa extremists came from nowhere. How come? They are well funded and supported by the PM’s office.

President Obama made a rousing speech against religious bigotry at the UN on Wednesday.

He made clear that trends such as those developing in Malaysia, where non-Muslims are being increasingly treated as unequal and liberal thinkers as enemies of society by leading figures, provides a dangerous source of instability in a world trying to fight off violent extremist organisations, which feed off such attitudes.

And the President made the point that such intolerance is not provoked by genuine religious teaching, but by political motives:

The following extract from Obama’s speech contains the strongest possible indictment of the kind of rabble rousing currently being indulged by BN/UMNO politicians and Malaysian government funded extremist NGOS:

“It is no exaggeration to say that humanity’s future depends on us uniting against those who would divide us along fault lines of tribe or sect; race or religion.

…It is the task of all great religions to accommodate devout faith with a modern, multicultural world. No children – anywhere – should be educated to hate other people. There should be no more tolerance of so-called clerics who call upon people to harm innocents because they are Jewish, Christian or Muslim. It is time for a new compact among the civilized peoples of this world to eradicate war at its most fundamental source: the corruption of young minds by violent ideology.

That means cutting off the funding that fuels this hate. It’s time to end the hypocrisy of those who accumulate wealth through the global economy, and then siphon funds to those who teach children to tear it down.

…listen to the Imam who said, “Politics try to divide the religious in our country, but religion shouldn’t be a cause of hate, war, or strife.” [Barak Obama UN Speech 24/09]

Yet, Mr Obama, who had received Najib Razak and his wife Rosmah only days before in Washington, is currently ignoring the fact that this Malaysian PM and people close to him in government are openly descending to these very same divisive tactics for their own political reasons in Malaysia. 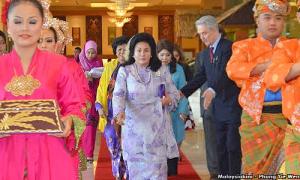 Rosmah ‘Queens it’ in Washington..

So, before they cosy with Najib too far, the President’s advisors would do well to consider if they are relying on a sanitised version of current events in Malaysia, thanks to the usual expensive PR and the British public school delivery of the posh patrician PM himself?

Najib can talk about progressive liberalism and his wife can talk about education for the poor, but the US Embassy in KL cannot ignore the dash for repression being undertaken by his failing regime, which has decided to stir up the very religious and sectarian hatred that Obama rightly deplores.

All this. in a politically motivated attempt to brand his opponents as anti-Muslim or anti-Malay supremacist, in order to claw back support based on nationalism and hate.

Despite these blatant tactics by UMNO, which have been condemned by human rights and civil society organisations across the world, Obama in this very same UN speech attempted to put forward Malaysia as a progressive Muslim state, rather than one which is moving backwards towards oppression and violence.

Even so, the President chose an interesting positive quality to link with Malaysia.  He avoided referring to matters of religious and racial harmony, which he said distinguished for example Senegal and Tunisia, but instead praised Malaysia’s “vibrant entrepreneurship”:

“Positive change need not come at the expense of tradition and faith. We see this in Iraq, where a young man started a library for his peers… We see it in Tunisia, where secular and Islamist parties worked together through a political process to produce a new constitution. We see it in Senegal, where civil society thrives alongside a strong, democratic government. We see it in Malaysia, where vibrant entrepreneurship is propelling a former colony into the ranks of advanced economies. And we see it in Indonesia, where what began as a violent transition has evolved into a genuine democracy.”

Such carefully chosen praise may well indicate that the democratic deficit and Malaysia’s plummeting religious and racial harmony has indeed registered in Washington after all.

On the other hand the concept of “vibrant entrepreneurship” in Malaysia is no less of a thorny issue.

After all, few countries in the world are so beset with the deadening hand of political corruption or as unequal in the fair distribution of the profits from the country’s resources.

As everyone in Malaysia knows, money is certainly being splashed around on enterprises, but it is public money on so-called public enterprises, but where the profits almost invariably and entirely end up in the private hands of the same small oligarchy who run BN.

There is no greater example currently of this state of affairs than the burgeoning scandal of 1MDB – the secretive ‘sovereign wealth fund’ started by Najib that has so far run up a public debt of some RM38billion, which appears largely invested in schemes of dubious benefit and limited accountability.

Mr Obama should be wary of being linked to 1MDB, either directly or indirectly, or appearing to praise Malaysia’s “vibrant entrepreneurship” while being so linked.  Because, 1MDB does not represent the kind of entrepreneurship that is approved of in democratic and law abiding circles associated with Mr Obama. 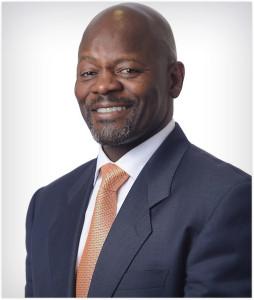 Nevertheless, recent investment news reveals that President Obama’s own key fundraiser, Frank White, has indeed joined with IMDB in its latest grandiose and eye-wateringly expensive power project, funded by public borrowing and, of course, sanctioned by the fund’s Advisory Board Chairman, the PM and Finance Minister, Najib Razak.

The project in question is the so-called 1MDB Solar Sdn Bhd’s solar photovoltaic (solar PV) plant in Kedah, projected to create 50MW of power, thanks to a handy power purchase agreement with the government, fixed behind closed doors as usual.

In May of this year it was announced that 1MDB’s joint venture partners in this deal would be Malaysia’s Tenaga Energy and the US company DuSable Capital Management, which is run by Obama’s chief fundraiser Frank White.

Frank White has a successful career history investing in energy focused infrastructure projects and has been identified as an entrepreneur, who has sought to exploit his political experience by the Washington media.

So far, apparently so good.

However, politically connected Americans doing business with 1MDB ought surely to sup with a very long spoon with a fund that has raised so many questions on accountability and transparency in Malaysia and which is also raising questions across the global money markets?

Valid objections have already been raised by opposition politicians, but not answered.

For example, the cost of this IMDB solar power project has been valued at RM1billion.  Yet, observers have begun pointing out that the Norwegians are building a plant in Ghana for the same capacity at an estimated less than a third of the cost, at around RM300million. 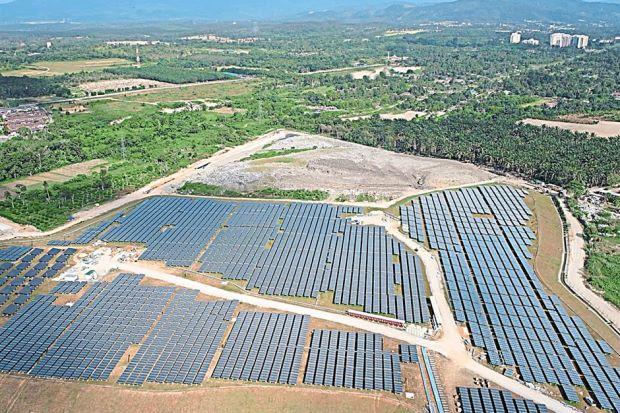 The Star – features another similar project. Rival solar power providers in Malaysia stand to be squeezed out by this preferential deal for 1MDB

Najib Razak has demonstrated a pattern of seeking to link 1MDB ventures with key connected figures in wealthy states such as Saudi Arabia and Abu Dhabi, giving the appearance of official state joint partnerships, which have not always existed in practice.

So, it is no surprise that a business leader, who is so intimately well-connected with the US President himself, should be welcomed into this, 1MDB’s latest ‘joint venture’ into solar energy.

But, when Mr Obama next refers to Malaysia’s “vibrant entrepreneurship” he might do better to disassociate himself more clearly from the activities of his fundraiser in a country, where such public projects are so characteristically clouded in mystery, opaqueness and massive over-spending that can never be adequately explained.

Instead, it was Mr Obama himself who agreed to ratify the 1MDB solar project during Najib’s recent trip to the United States and then to promote Malaysia’s “vibrant entrepreneurship” in his speech to the UN so soon after!