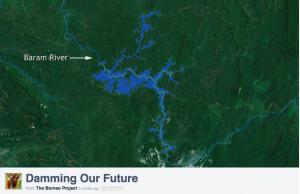 The destructive reach of the planned Baram Dam

The first in a series of films by the California based Borneo Project is released today.

The NGO has worked for many years supporting Sarawak’s native communities and it points out the disastrous consequences threatened by Taib’s ‘brainchild’ SCORE project and his plans for 12 more mega-dams, starting with Baram.

Borneo is the oldest rainforest on earth, with more diversity of plants and animals than anywhere else on the planet.

Is that not something to be proud of and is it not madness to turn this rich and unique place into yet another concrete jungle of factories and wastelands that can be seen anywhere in the sort of ‘developed’ and ‘modern’ countries that Taib Mahmud is so desperate to ape?

It is clear that the native communities disagree with the ‘modernising’ old man. See the movie below and visit the Borneo Project website.