Another top international news organisation has endorsed and corroborated the information Sarawak Report has exposed about Taib Mahmud’s extraordinary and illicit wealth.

The major news service Bloomberg/Business Week has just brought out an extensive analysis of the divorce case of Taib’s son Abu Bekir and what it tells us about his father’s illegitimately acquired global assets.

Meanwhile, Taib and his wife were still enjoying centre stage at this weekend’s Sarawak social scene, in deference to his continuing meddling and control of the state. 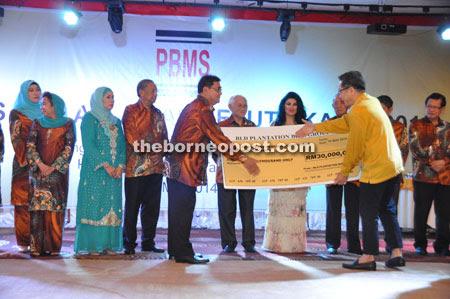 Centre stage in Miri, while the new CM looks on… (Borneo Post)

Abdul Taib Mahmud, who ruled Sarawak, the Malaysian state on the island of Borneo, for more than three decades, retired in February with a billion-dollar family fortune.

Some of the details of Taib’s wealth surfaced during the divorce settlement battle between his elder son, Mahmud Abu Bekir Taib, and Mahmud’s ex-wife, who is seeking more than $120 million in potentially one of the biggest separation payouts in Malaysia. The family has the largest stake in the state’s biggest infrastructure company and other assets, according to corporate filings.

Silver-haired with a goatee, the country’s longest-serving politician oversaw state coffers for finance, planning and resources management in Malaysia’s biggest state, source of about half the nation’s crude oil output. He was given a “relatively free hand” to govern Sarawak because of his pivotal role in keeping Prime Minister Najib Razak’s National Front coalition in power, said Andrew Aeria, an associate professor in the department of politics and international relations at Universiti Malaysia Sarawak.

“The former chief minister was very powerful and influential, not only in Sarawak but in national politics on account of his experience, knowledge and longevity in office,” said Aeria, who wrote the 2004 report, “Political Business in Sarawak: Productive or Lumpen Capitalist?”

Taib and his political allies won 25 seats in the general election in May last year, without which the coalition would have lost its majority in Malaysia’s national parliament. He stepped down as chief minister on Feb. 28 and became Sarawak’s governor, a largely ceremonial role, the following day.

The 77-year-old, who has never appeared on an international wealth ranking, presides over a family whose fortune exceeds $1 billion, according to the Bloomberg Billionaires Index.

He declined to comment on his net worth calculation and a request for an interview through Jameson Ahip Nawie, his press secretary. The e-mailed request for the interview listed the family’s assets that the calculation was based on. It also asked for his comments about the Malaysian Anti-Corruption Commission’s investigation into graft allegations against him.

The government agency said in a written reply in March to members of parliament that the investigation on Taib is still ongoing. The former chief minister wasn’t involved in decisions to award any project or land to his family members, according to findings made so far by the commission. Taib had denied the corruption allegations and has never been charged.

The commission said in 2013 it established a task force to expedite investigations into allegations of graft against Taib. Global Witness, a London-based anti-corruption campaign group partly funded by billionaire investor George Soros, released a video purporting to expose corrupt dealings in the state by his family members.

“I think it’s a bit a naughty of them,” Taib told reporters in Kuching of Global Witness in a YouTube post by FZ.com, which runs a news website. “They are using their big power to blacken my name.”

Under Taib, Sarawak reduced its dependence on mining, agriculture and forestry by developing its manufacturing and renewable energy industries. The state accounts for about 10 percent of Malaysia’s gross domestic product, according to government data.

The legal tussle between his son and his ex-wife, Shahnaz Abdul Majid, has been playing out in court and the Malaysian media since their divorce in 2011.

Shahnaz, who has an MBA in finance, told the Shariah, or Islamic, High Court in Kuala Lumpur in September that she was deprived of sex for a decade and said Mahmud had wed an Australian and, later, a Russian without her knowledge during their 19-year marriage. Under Malaysian law, it’s legal for Muslim men to marry as many as four wives.

Mahmud is the deputy chairman of Kuala Lumpur-listed Cahya Mata Sarawak Bhd. (CMS), the largest infrastructure group in Sarawak. He personally controls assets valued at about $300 million, according to forensic accounting firm Ferrier Hodgson’s Malaysian venture, which Shahnaz hired. He has stakes in 49 companies, according to documents presented by the accounting firm in court.

The value of holdings held by Mahmud could be “substantially” higher because 18 of those companies are exempted from filing their annual financial statements to regulators and couldn’t be valued, Andrew Heng, a partner at Ferrier Hodgson’s Malaysian office, told the court on Jan. 22.

Heng was cross-examined by Mahmud’s lawyer on April 14 and said his report was prepared without bias or external influence, the Malaysian Star reported.

Mahmud’s father controls 42 percent of Cahya Mata Sarawak through the family holding company, Majaharta Sdn, and under the names of his children and late wife, Lejla Taib, according to stock exchange filings.

The family became the biggest shareholder in the company, which started as a state-owned cement manufacturer, through a series of acquisitions in the 1990s, transforming it into a conglomerate with interests that included a brokerage and a road construction business, according to Aeria’s report. According to Shahnaz, Mahmud also may have stakes in 85 companies abroad that haven’t been valued, her lawyer, Rafie Mohd Shafie, told the court.

“The 85 foreign companies don’t exist,” Mahmud said in response to a Bloomberg News query about the valuation of his assets by his ex-wife’s accountant, as he walked out of the courtroom on Jan. 22, accompanied by a bodyguard. “I don’t know anyone who has 85 companies. Do you know anyone who has 85 companies?” Mahmud didn’t respond to e-mailed questions about family’s wealth and the valuation of his assets listed in the divorce settlement court hearings. His father entered politics at age 27, after graduating from the University of Adelaide in Australia with a law degree in 1960 through a scholarship. The former chief minister belongs to the Melanau group, one of about 27 different ethnic groups in Sarawak. He held various ministerial positions in Sarawak and Malaysia before taking over in 1981 as the chief minister from his uncle, Abdul Rahman Ya’kub. He was diagnosed with early-stage colon cancer and underwent surgery in 2006, Bernama reported. His Polish-born wife died of cancer in 2009. More than a year later, he married Syrian-born Ragad Kurdi Taib, 46 years his junior, the state news agency said.

His son, Mahmud, is the chairman and biggest shareholder of Sarawak Cable Bhd. (SRCB), a power cable and wire maker, which won transmission line projects from state-owned Sarawak Energy last year. Sarawak Cable shares were unchanged as of 3:02 p.m. in Kuala Lumpur trading, while Cahya Mata Sarawak rose 1.5 percent to 9.76 ringgit, set for the highest in almost two weeks. The governor’s children have stakes in companies that own more than 36,000 hectares of oil palm land worth about $300 million, according to company and court filings. They also own the Hilton Adelaide hotel through Sitehost Pty, which is owned by the family, according to filings with the Australian Securities & Investments Commission. In Sarawak, the family has interests in the Miri Marriott Resort & Spa, which overlooks the South China Sea, and another hotel near a Unesco World Heritage site known for its caves, according to Malaysian company filings.

Other holdings include real estate in the U.S. and Canada that are valued at almost $300 million, based on recent transactions and average rents in the areas provided by property consultants. Taib’s mansion, which overlooks the Sarawak River, is outfitted with gilt-edged Italian furniture and its own jetty, according to documents Shahnaz’s lawyer presented in court. A ring with a walnut-sized gem surrounded by diamonds adorns one of his fingers and he is chauffeured around in a Rolls-Royce, according to photographs at public events. The family controls the Abraham Lincoln Building in Seattle through Washington-based Wallysons Inc., according to the Washington Secretary of State Corporations Division’s website. Taib’s son is the chairman of Wallysons while his son-in-law is the president, secretary and treasurer, according to the website. The building is home to the Federal Bureau of Investigation’s Seattle division headquarters, according to the address on the FBI’s website.

Sarawak accounts for half of the country’s crude oil output and is the sole provider of liquefied natural gas, underscoring its importance to the federal government, Standard & Poor’s said in a report in December. “His longevity in an environment of political stability has given him a tight rein over the state’s key growth drivers,” Song Seng Wun, an economist at CIMB Group Holdings Bhd., said in a phone interview from Singapore. “That has benefited the state coffer, and the private sector, including the businesses run by his family. They have benefited tremendously from the growth opportunity.”