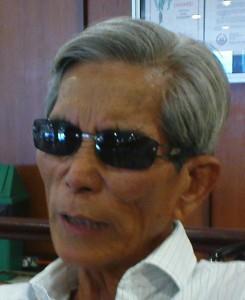 Chia Nyet Min – father of Michael Chia, now facing jail sentence for demanding kickbacks, he claimed were on behalf of Musa and BN

Sabah’s Chief Minister Musa Aman has quietly reached a judicial settlement with the father of the scandal torn businessman Michael Chia, by granting him major logging concessions and a barging monopoly, together worth a staggering RM67,300,407.

Chia, who has been exposed for running a series of secret bank accounts which benefitted Musa’s family, was sentenced to jail a few days after the deal went through on February 6th, over separate fraud charges.

The grants are all at the expense of the public purse and represent the settlement of a claim by the father, Chia Nyet Min, against Musa Aman in his capacity as Chairman and former Chief Executive of Yayasan Sabah.

Aman had granted him highly criticised barging monopolies, which the state company Sabah Berjaya Sdn Bhd then attempted to break in favour of a fairer and more efficient system for transporting the logs.

It would appear that the settlement, which was officiated by a judge before the case came to trial, represents a disastrous cave-in by the Yayasan’s subsidiary, thanks to the questionable monopoly deal, which had been negotiated by Musa with this business crony of many years standing.

Back in 2012 Musa had publicly denied any association at all with Michael Chia, who had once represented himself as the key gatekeeper to the Chief Minister for logging concessions and called himself Musa’s ‘adopted son’ in deference to the close relationship between Musa and his own father Chia Nyet Min.

However, Sarawak Report exposed Chia as the nominee behind a network of bank accounts, which processed millions of dollars of timber kickbacks, which then found their way to Musa’s own Swiss bank accounts and into payments for own his sons in Australia. 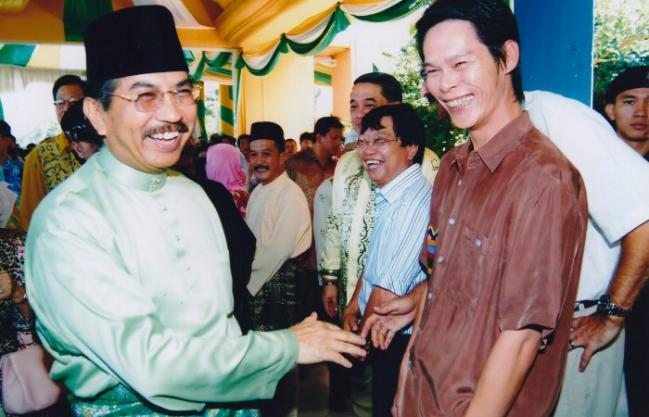 No business association whatsoever – Musa and Chia in happier times

When the issue could no longer be denied, given the weight of the evidence, Musa’s BN bosses attempted to then justify the graft by claiming that the payments were for party purposes and not personal gain!

How this legitimised illegal bribes and kickbacks for logging concessions has yet to be explained by the ruling coalition, since it is every bit as illegal to accept bribes for the benefit of a political party as it is to accept bribes as an individual. 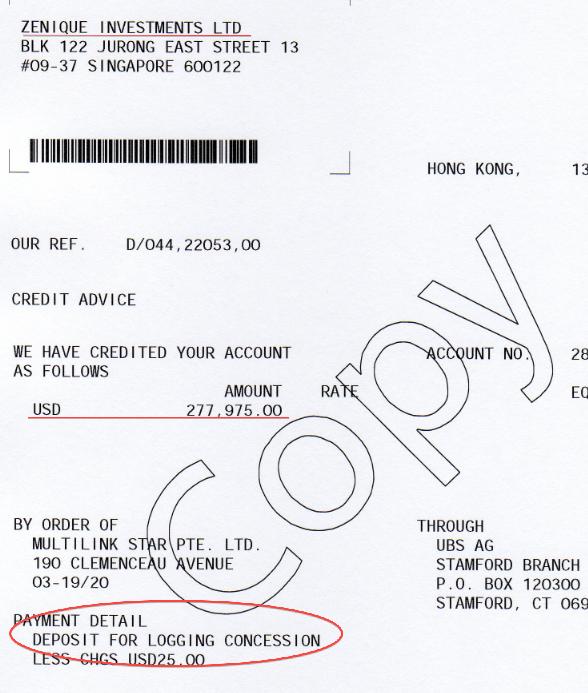 Payment by timber tycoons to Chia’s front company Zenique Investments were marked as being Deposits for logging concessions!  Why was such money not going into the public finances?

Graft and monopolies that have destroyed Malaysia’s jungle state

Records obtained by Sarawak Report show that Musa had a long association with Chia Nyet Min, granting his company Kini Abadi Sdn Bhd major lucrative barging monopolies in 1997, while he was Chief Executive of Yayasan Sabah.

There was no benefit to such monopolies to anyone besides Chia and they created great annoyance to other timber companies who wanted to use cheaper and more efficient methods of transporting their logs. 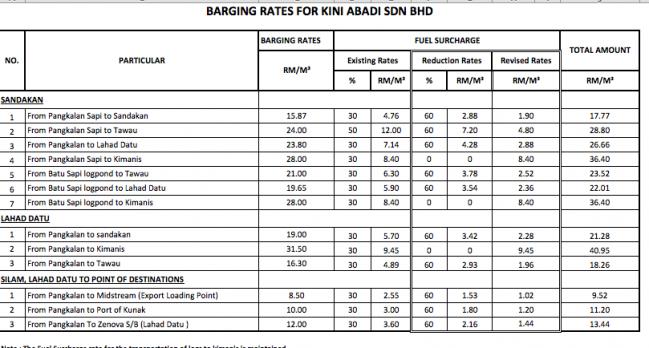 The rates charged by Chia’s monopoly for barging logs

It was because of complaints over the monopoly that Sabah Berjaya started to allow rival timber barons to use other forms of transport and this sparked the law case by Kini Abadi against Sabah Berjaya.

Many wondered if this was a genuine falling out between the politician and his key crony, or just another way of extracting public money for Aman’s purposes, which appear to include subsidising his party? 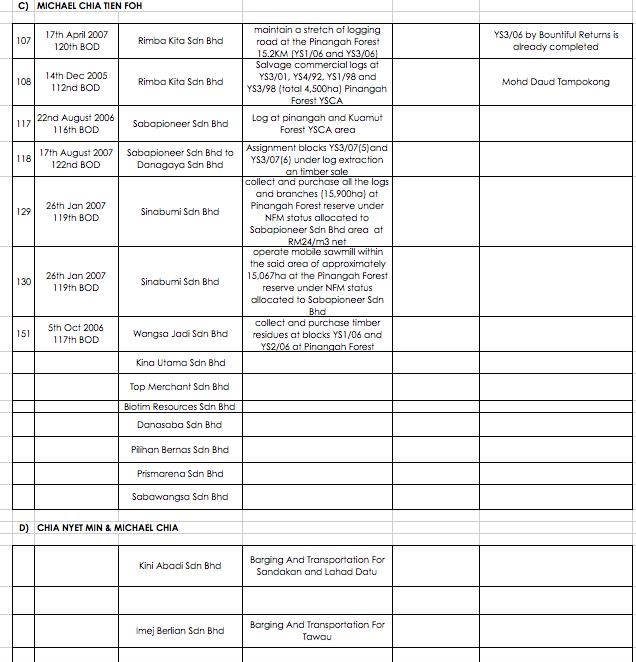 Yayasan Sabah’s concessions and monopolies offered to Michael Chia and his Dad, Chia Nyet Min (MACC Document) – Musa was originally Chief Executive and is now Chairman (as well as Chief Minister of Sabah)

Chia’s claim against Sabah Berjaya/ Yayasan Sabah was that the loss of the monopoly, which had been renewed for another 5 years in 2006 was worth a staggering RM84million.

At first Sabah Berjaya vigorously defended the action, declaring that the foundation was under no obligation to maintain the monopoly, because the revised contract made clear that the whole arrangement was at the discretion of the state owned foundation.

The defence case also said that Kini Abadi had not fulfilled its side of the contract, because logs were being transported too slowly and the arrangement allowed for other contractors to also be offered the same job: 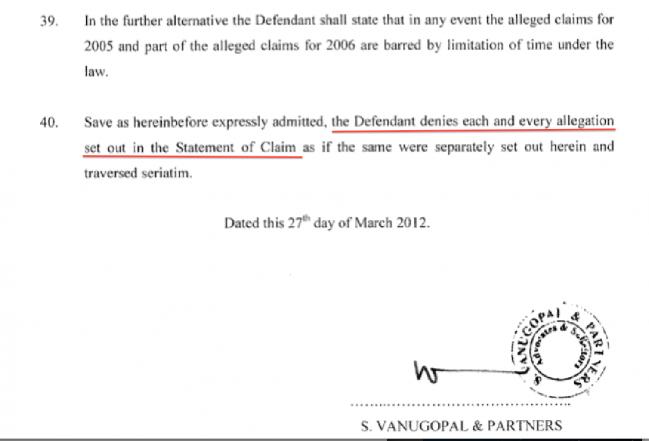 Brave words – but the defendant (Yayasan Sabah/ Sabah Berjaya) climbed down and paid up RM 64million!

However, our exclusive copy of the final settlement before the Judicial Commissioner in Sandakan, Dato Douglas Cristo Primus Sikayun, in February makes it clear that the state body eventually engaged in a humiliating climb down, which allows the Chia family to retain their lucrative stranglehold on the barging of logs and also gives them exclusive rights to chop down and clear another huge area of forest in the state!

The area conceded is nearly 4,000 hectares: 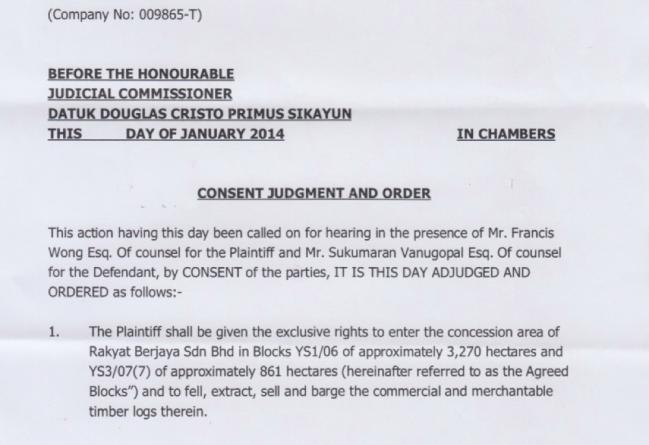 Compensation in the form of more timber concessions.

Furthermore, the settlement also agrees to allow Chia’s company to apply to extend the permitted cutting rates beyond the normal diameters allowed and to retain the barging monopoly.

There is even an agreement for a rapid meeting to discuss putting up the monopoly barging rates enjoyed by Chia and to implement the new rates within a week!

The total value of all these climb-downs and concessions is stated in the settlement as being worth RM67million to Michael Chia’s doubtless very contented father.

Not bad for someone with “no business connections whatsoever” with the Chief Minister and Chairman of Yayasan Sabah! 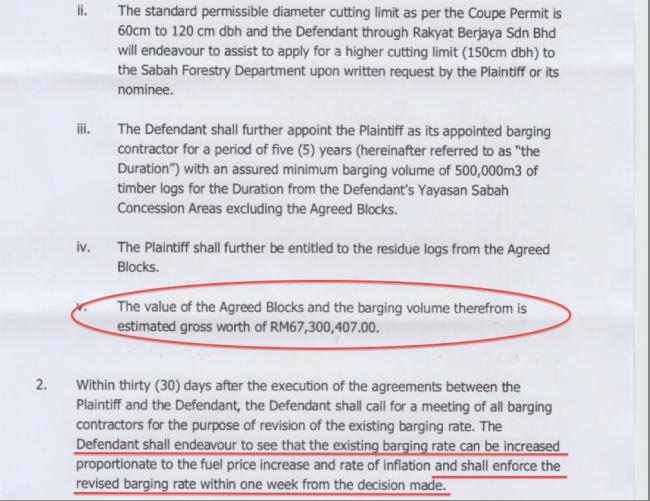 Profit to Mr Chia that could have gone to the state under a proper competitive tender for the contract.

What a pity for Sabah that its forests are to be further trashed to feed the greed of this family who have been exposed in court as utterly corrupted. 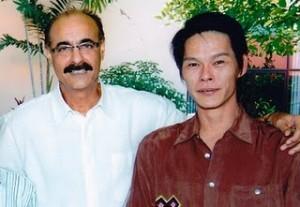 Fall guy? Chia with Musa’s lawyer, Christopher Barnes, to whom much of the money for logging concessions was eventually sent.

After all, Michael himself was sentenced to caning and a jail sentence just days after this settlement was reached in February.

His crime in this instance was to cheat a fellow timber tycoon into believing that he was the ‘fixer’, who could organise a concession from Yayasan Sabah, because as his status as the middleman for Musa himself.

Chia had told Argus Hassan that he needed to pay a political donation and a fat commission on top.

The court found that this was all untrue and that Chia was acting merely for himself.

How surprising, when everyone in the business recognised that Chia was the right hand man for Musa and after the BN hierachy have even admitted Chia was indeed handling ‘donations’ to the party.

RM64million is perhaps not a bad recompense for being the fall guy in this case!

[To review the case of Musa Aman and his ‘middleman’ Chia, see Sarawak Report’s archive and Spotlight section].