DUMPED FROM THE OSCARS! 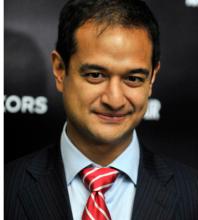 The soaring Hollywood career of the PM’s stepson Riza Aziz has crashed back down to earth, with news from Los Angeles that the Academy Awards committee have decided to remove his name from the list of nominations for producer of the best film.

In a highly unusual development the Academy chose not to accept the original list of producers put forward as the team behind Wolf of Wall Street and removed the youthful Malaysian money man from the slate of creative input.

The announcement followed a week of speculation around Hollywood, after the original Oscar nominations last Thursday, when it was noted that, although it was submitted for the Best Film category, Wolf of Wall Street failed to name its producers.

This represented an almost unheard of situation.

All the other films in the category as usual named their key producers, leaving only Wolf of Wall Street providing the ignominious statement “Nominees To Be Determined”. 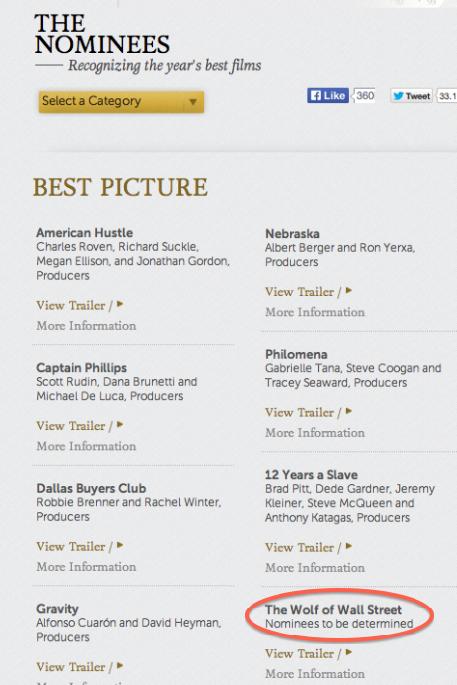 Behind the scenes it appears there had been heated discussions and very widespread concerns about the hijacking of creative roles by money-men seeking glory as well as profit by investing in Hollywood.

Normally, the rule applies that only a maximum of 3 producers should step up to the podium to receive and Oscar for Best Film, explain industry insiders, sometimes that number is stretched to four. 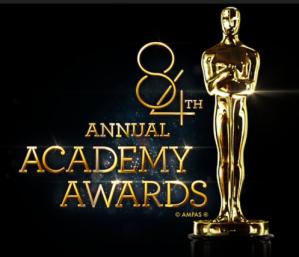 The message is ‘Not for Sale’

The original line up provided by Riza Aziz’s Red Granite, the company which bought up and bankrolled the long standing project back in 2011, had been Riza Aziz himself, partner Joey McFarland and working producer Emma Tillinger Koskoff.

Last night, after prolonged and embarrassing behind the scenes discussions, the Academy finally announced that Director Martin Scorcese and lead actor Leonardo Di Caprio, whose own companies had both been involved in developing the film, should receive the accolade instead.

The producer line up is now officially Scorcese, Di Caprio, Koskoff and McFarland!

The Hollywood website Deadline, described the development as a “rare move” that “turned the tables against Aziz” and released the following statement last night from Red Granite:

“We are thrilled that the Academy has recognized the invaluable contributions of Marty, Leo, Joey and Emma on behalf of The Wolf Of Wall Street. Riza Aziz and Red Granite remain honored to be part of the production.” [Deadline] 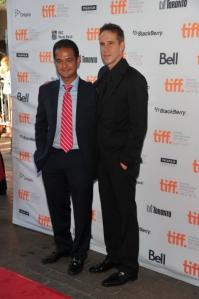 Oscars not for sale?

Hollywood insiders, speaking to Sarawak Report last week, explained the issues that prompted the re-think over the Wolf of Wall Street nominations.

They said the turn around reflects a concern within the influential Producers’ Guild of America (PGA) that certain big financiers are attempting to claim producer credits for films they bankrolled but did not make.

A prime example was Wolf of Wall Street, which was financed by Aziz’s Red Granite Productions after Warner Bros pulled out, having originally developed the film.

“They are greener than green” opined one experienced producer, speaking of Riza Aziz and his partner at Red Granite, Joey McFarland, who previously acted as a party planner for the youthful Malaysian ‘billionaire’ Jho Low.

Another had earlier told us that Director Martin Scorcese had at one point thrown the pair off the set of Wolf Of Wall Street: 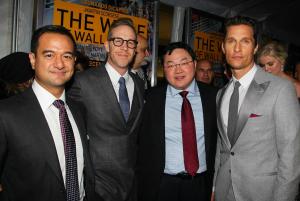 Red Granite’s business strategy so far has been to buy up and bankroll movie projects that have already been developed by other professionals, but then dropped during later stages of production.

McFarland and Aziz have signalled they have the deep pockets to pay out hundreds of millions on projects that major studios have decided were too risky to complete.

Business insiders have calculated that since it launched in a blaze of publicity, with the biggest party in Cannes in 2010, the company has shelled out coming up to half a billion dollars on a raft of up-coming movies that are yet to turn any kind of significant profit.  These include ‘Dumb and Dumber 2′, ‘Horns’ and ‘Out of the Furnace’.

Wolf of Wall Street itself cost $100million, plus another $35-$40 million will have been spent on advertising and marketing the film, explained a Hollywood professional.

“it’s grossed $80million so far.  The theatre keeps 60% and the studio 40%, then there are all the payments before the producers get anything back”

Although Red Granite’s lawyers have claimed to Sarawak Report that the company has been re-couping its vast outlay through pre-sales, another insider gave us a different perspective:

“Randy Herman is their Chief Financial Officer, who is going round town saying “we don’t need to pre-sell our movies, we have the cash bla bla”. That’s the way to bring in new product and attract business, of course.  And it bears out – production on Wolf of Wall Street started in August 2012 and they didn’t pre-sell the movie to anyone till November.  They had to finance the whole movie out of their pockets. That is a fact.”

It is a perception held by other producers, who told us that Red Granite has been dazzling Hollywood with its access to huge funds for movie-making, at a time when other far more established producers and film financiers have been struggling to secure investment in this risky business.

“Everyone is wanting to know them and get access to funding for their movies. People are not asking too many questions, financing has always come from crazy places. But where are they getting all the money? That is what everyone wants to know round Hollywood. How can they raise so much money and where does it really come from?” 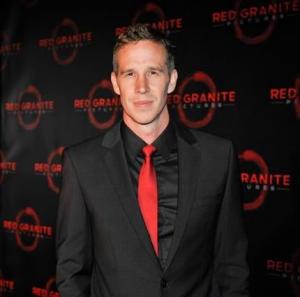 Red Granite’s ‘green’ producer, Joey McFarland has kept his own nomination for an Oscar.

The repeated story in Hollywood is that no one had heard of Riza Aziz or Joey McFarland before they launched with the “hottest party in years” in Cannes three years ago and that they have no experience in the business or skills in film-making.

As such, there is a view in certain influential quarters in Hollywood, that this pair of financial backers should not be attempting to take the producer credit for the artistic content and execution, which should go to others.

The issue is said to be a growing problem as investors with egos attempt to ‘hijack’ the work and reputations of experienced movie professionals.

And it appears to be the main reason why the nomination process stalled and then the Academy decided to drop the Malaysian Prime Minister’s apparently extremely wealthy son from the list of Oscar nominations.

“The Producers’ Guild don’t like people who come in and write a cheque and call themselves producers”, explained one inside observer.

Who were the real producers?

It is being widely spoken in Hollywood for example that the person who it is recognised really drove through the Wolf of Wall Street Project was the original producer, Alexandra Milchan.

“She came up with the idea, got the rights to the story of Jordan Belfort [the jailed financier played by Leo Di Caprio], chose the script writer Terry Winter and controlled the whole project till it was taken up by Warner bros. She was the one who took the idea out there and chose Leonardo di Caprio for the lead role from many acting contenders and also got Martin Scorcese in as the Director”, explained one senior Hollywood insider.

He was referring to a dispute that came to court after Red Granite had demanded that Milchan surrender her producer credit for the movie after agreeing to finance it.

“After Warner bros dropped the controversial film, Milchan came back and took over and eventually sold the whole project to Red Granite. It’s common knowledge. That is what producers do, but Red Granite just bought over a done deal. They aren’t what I would call producers, they are financiers and money men”.

Milchan has now settled for what Deadline have described as “relegation” to an Executive Producer role.  However a similar dispute has now broken out between Red Granite and the original producers of their latest film Dumb and Dumber 2, Motion Picture Corporation of America (MPCA).

MPCA have not minced their own words in describing their view of Red Granite in their own depositions to court:

“McFarland and [Aziz] lack the experience necessary to successfully produce motion pictures themselves. Although Red Granite apparently has family money from [Aziz], Red Granite will not succeed with money alone because McFarland and [Aziz]‘s experience producing motion pictures during their short tenure in the industry consists of cavorting at nightclubs with Paris Hilton and making dinner reservations at posh nightclubs in New York and Los Angeles.” [Legal deposition against Red Granite Pictures]

These views seem to have struck home with the powers that be in Hollywoods motion picture industry and played into the stunning decision to drop Aziz as an Oscar contender.

“Breaking the monopoly of Jews in Hollywood”? 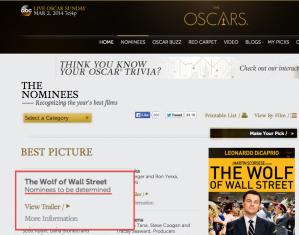 There is another area of concern about Red Granite in Hollywood circles, which may also have played into the decision against Aziz.

It follows Sarawak Report’s exposure of comments in certain Malaysia based newspapers, which quoted “close friends” of Riza Aziz in the US rejoicing in Red Granite’s role in “breaking the monopoly of Jews in Hollywood”.

Such bigotry is certainly reflective of the sentiment in certain sections of Malaysia’s ruling BN coalition, but it has appalled the liberal and egalitarian community in Hollywood.

Many of Hollywood’s high flyers are indeed rightfully proud of being Americans of Jewish heritage.

However, America is passionately committed to success through merit, unlike in Malaysia, where it is increasingly complained that only certain well-connected families can expect to monopolise money-making opportunities.

It has been noted in Hollywood that so far Riza Aziz, who we are told has shown no overt racism or religious bigotry himself, has nevertheless made no move to disown the obnoxious statement. 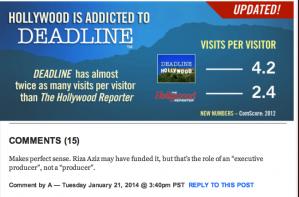 And the implications of “breaking a Jewish monopoly” creates a worrying image of Hollywood’s currently biggest spending private company.

For a start, it smacks of potential discriminatory practices against any talented individual, who might happen be Jewish!

This is clearly not something the Producers Guild or the Academy would  wish to reward or encourage with an upcoming Oscar.

So, until Mr Aziz does disown the published remarks of his so-called friends this unease will continue.

However, he if he did so it would certainly go down badly with the zealots back home, who are becoming increasingly vocal and influential within his stepfather’s minority government.

The hypocrisy of a Prime Minister who leads a hardline and interfering Muslim regime, which whips people for drinking and has banned the very movie Wolf of Wall Street for its nudity, language and drugs, yet who has allowed his own son to pour millions into the production has been noted.

So have the highly publicised constant round of alcohol fuelled parties attended by Aziz and his friend Jho Low.