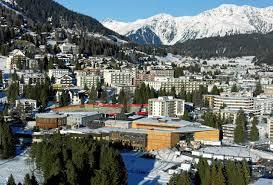 Snowy luxury of Davos – will leaders think about the hot countries who need a fair system for their people?

As the leaders of the wealthy nations and international finance community gather in snowy Davos for their annual discussions, one new leader from Africa has written an eloquent article in the UK’s Guardian Newspaper.

Guinea’s Alpha Conde sums up the key problems facing certain warmer places in the world, like Guinea and Sarawak, whose people are blessed with rich and fertile lands and relatively small populations.

Such peoples ought to be comfortable and protected in their lives, but owing to the corrupt activities of their leaders they are often anything but.

If Alpha Conde of Guinea practices half of what he preaches in this article, then the people of that country are truly fortunate in their new leader, chosen from the first truly democratic election in years.

He explains the misery caused by corrupt political leaders in resource-rich, developing countries, who steal from their people, rather than helping them improve their lives. 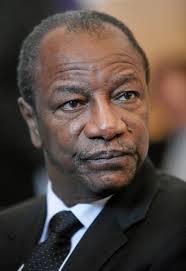 Alpha Conde – trying to do something about ingrained corruption and kleptocracy

But, he also points to the critical blame that lies at the door of the greedy foreign companies, who pay them backhanders for concessions and who encourage that very corruption – enticing them with the most luxurious and corrupting aspects of the modern, jet-set life.

Also, the greedy foreign accountants and lawyers, who help those politicians and greedy companies cook the books.

And, of course, the greedy foreign bankers and ‘wealth managers’ who sneak all this money off-shore into shady accounts in the BVI and elsewhere.

Is any of this familiar to Malaysians?

Alpha Conde’s message at Davos is, above all, to the leading foreign governments, who are allowing all this to happen and whose regulation is so poor that it is summed up by the phrase “deliberately turning a blind eye”.

The ‘deliberate blind eye’ of mainly western democratic countries with advanced social systems is what is enabling corrupt, stolen money to end up in off-shore tax havens.

Here, this stolen money does little to help anyone, except inflate the prices of properties in desirable areas of the democratic world, when the greedy and corrupted ‘developing world’ politicians decide to spend the money on themselves. 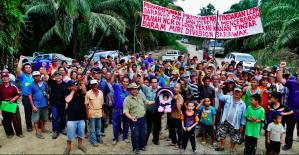 What about OUR future? Baram protesters place a baby symbolically at the head of their anti-dam march

Alpha Conde is now asking at Davos for these ‘law abiding’ western countries to stop this behaviour and to shelve the excuse that is always used, which is that “if we nice people don’t move in then somebody else will”.

Who cares if the thief was nice or nasty?

The point of gatherings like Davos is so that leaders from all over the world can get together and make proper rules to ensure a fair game for all.

So it would be very nice if they could get on with it.

The people of Sarawak might very well wish that they had a leader with the sort of ideals expressed by President Conde of Guinea below.  For this reason we re-publish the full Guardian article below:

At Davos, the west must help us root out corruption in Africa

As president of Guinea I know we can’t tackle this problem alone – corruption is embedded in the western institutions that have helped bleed our country dry.

Less than seven months ago I was invited to the G8 in London by David Cameron to make the case for tackling corruption through transparency. I participated because it was clear the world’s wealthiest leaders finally understood that to deal with this complex problem, an international response was needed. Cameron said: “We need to make sure that mineral wealth in developing countries becomes a blessing, not a curse. So at the G8 I will push for greater transparency alongside more open trade.”

Few countries have experienced that curse more than Guinea. For generations, internal corruption and a lack of governance and democracy allowed a few predator companies to steal the assets of our people with impunity. The Sudanese philanthropist, Mo Ibrahim, recently said of one of the contracts the government are now investigating: “Are the Guineans who did that deal idiots or criminals? Or both?”

A good question. And one we hope to answer with the imminent publication of a review into the contracts signed in those dark days of dictatorship.

I became Guinea’s first democratically elected president four years ago, with huge public expectations. Among them, bring back the rule of law, return Guinea to solvency, and reduce the levels of fraud in our previously bloated military. It has been a hard and often bitter journey for Guineans but we are slowly starting to turn the tide. We have reduced our fiscal deficit to 3%, the army now accounts for 10% of our GDP rather than 40%, and economic growth this year is projected to exceed 4.5%. Yet there is a terrible irony in our struggle to bring our economy back from the brink.

It is that Guinea is incredibly rich in natural resources – with the largest bauxite deposits and the single largest untapped iron ore assets in the world – none of which, until now, the people of Guinea have enjoyed. A small number of offshore companies, aided and abetted by corrupt domestic regimes, bled Guinea’s resources for decades. A slow death facilitated by the network of lawyers, accountants and financial advisers sitting in offices in New York, London, Paris, Geneva, Hong Kong and Singapore.

No more. I am in Davos to call on western governments to put power behind their promises of transparency and protect the interests, not only of Guinea, but also the responsible partners who are investing in our country and playing by the rules.

I am asking nothing that Guinea is not doing itself, under far harder circumstances than those of the west. Our central bank reforms mean that our economy must rely on cash budgeting. We cannot print money, we must live on what we have. The continuing overhaul of our mining industry has brought much-needed transparency to the allocation of contracts. We have involved the international NGO, Revenue Watch, to monitor state accounting practices.

But we live in a global economy. We simply can’t deal with the network of corruption embedded in a few key western institutions from a distance of nearly 3,000 miles. These corrupt practitioners operate from the west, but their practices are global and require a global response. Only tighter, more responsive and highly co-ordinated action between law enforcement authorities in both developing nations and the world’s financial centres will be effective.

Many companies and some governments already understand this. Some of the world’s most respected companies are investing in our mining industry on fair and transparent terms. Co-operation from the US has already uncovered sizeable evidence of previous corruption. With international legal co-operation, Guinea will soon be announcing the outcome of an investigation into some of the most disturbing allegations of mining corruption in Africa’s history. I ask other countries to do the same with their own financial institutions.

Our country’s past has not been one of which many Guineans can be proud. Our future must be. We are doing everything we can to create a state built on transparency and the rule of law. We do not expect western countries to solve our problems for us. But, starting with those few corrupt institutions they host, I do ask them to be part of a joint solution.