Australia Buys Out Taib-Linked Logging Contract To Save Its Forests 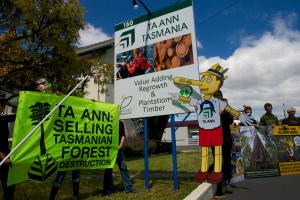 In a surprise development the Taib family company Ta Ann has accepted a multi-million dollar settlement from the Australian Government, in order to give up major timber supplies in the state of Tasmania.

The move is a stunning vindication for environmental campaigners in the state, who have suffered vilification and arrests for protesting against the logging in Tasmania’s high conservation value forest areas.

However, it has highlighted serious questions as to why the Sarawak company was ever allowed such permits in the first place and why, despite the payment, Ta Ann is still being allowed to source wood from Tasmania’s threatened forests?

Campaigners from the Huon Valley Environment Centre, who exposed Ta Ann for falsely marketing their wood “eco-friendly” in Japan, are calling for the company to be expelled altogether, particularly given the growing international recognition of Sarawak’s timber corruption and Ta Ann’s own highly questionable record.

“Here is a company that is responsible for misleading their Japanese customers with the source of their Tasmanian product, extensive and proven links with criminal abuses of power and environmental destruction that has violated the human rights of indigenous people in Sarawak, Malaysia. And now the Australian Government will pay Ta Ann $28.6 million, the community have been misled to believe the company was going to leave” [Jenny Weber, Huon Valley Environment Centre]. 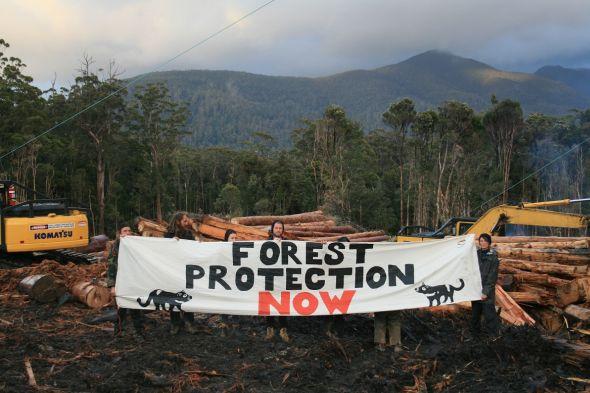 Progress and clear vindication after a determined campaign, but Ta Ann is still felling forest in Tasmania.

The announcement is a surprise move after a bitterly contested Forest Agreement, designed to protect Tasmania’s threatened forests, came into force this month. 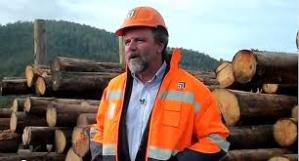 Controversial – Evan Rolley was a key Forestry Department negotiator in Ta Ann’s 2006 agreement to source wood in Tasmania. Last year he moved to become their Chief Executive in Tasmania.

Prolonged negotiations had been almost derailed by political supporters of Ta Ann, who threatened to pull out if the company continued to be criticised by Green campaigners, who want the company to cease operations altogether.

The compromise solution, supported by NGOs such as The Wilderness Society and Australian Conservation Foundation, but not the Green Party, has not halted further logging in a major conservation zone, but accepts that past contracts should be honoured.

The most controversial of these is the 2006 contract with Ta Ann allowing it to source wild timber for its two veneer factories in the state.

It was therefore a major step forward when on Friday, Ta Ann Tasmania, whose Chairman and major shareholder, Hamed Sepawi, is Sarawak Chief Minister Taib Mahmud’s cousin, announced that it had unilaterally accepted a federal government payment amounting to AUS$28.6million, in return for giving up around 40% of the wild timber rights that it had originally secured from Tasmania’s State’s Forestry Department back in 2006.

The Head of Forestry Tasmania at that time, Evan Rolley, is now the Chief Executive of Ta Ann Tasmania.

Green campaigners say they are of course hugely relieved at the decision by the Federal Government to pay off a large chunk of Ta Ann’s claims to Tasmania’s forest areas and regard it as vindication for their concerns.

But, they say it does not go far enough and they are demanding to know why Tasmania entered into such binding and destructive agreements with Ta Ann in the first place?:

“The contract signed in 2006 with Ta Ann was an economically unviable contract between the company and the Tasmanian Government. Closer scrutiny was required on the original contract to determine how such an injurious agreement to Australia’s taxpayers was secured. Ex-Premier Paul Lennon and Forestry Tasmania’s CEO at the time, Evan Rolley are responsible for the Australian taxpayer being in an outrageous position of having to buy off a company that is highlighted across the world as being unacceptable in terms of its practices and political abuses and connections,” Jenny Webber, Huon Valley Centre

The partial payment to Ta Ann reduces the damage the company will do in the state, but it will fuel demands for more information about how the controversial Sarawak company run by Taib’s cousin was granted its opportunities. 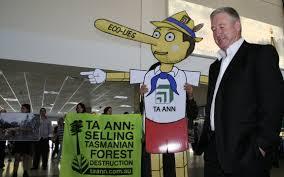 Bryan Green – the State Energy Minister has been a key supporter of Ta Ann.

Back in 2006 it was claimed that Ta Ann was planning to use only plantation forest wood to process in the two saw mills that it was proposing to build.  The company was even awarded some $8million dollars of public subsidies to support its investment.

But, in practice all Ta Ann’s wood has been sourced far more cheaply from natural forests remaining in the state, thanks to the terms of its actual contract.

“A chatty Hamed Sepawi told the media in Hobart yesterday that people had worked to 3am and 4am the last few nights to finalise arrangements for the mills. Mr Sepawi then observed that one of the planned mills, the Huon Wood Centre, would be built in Franklin, Mr Lennon’s electorate. “So he has a lot of reason to push it,” Mr Sepawi grinned. He next noted that the other mill, the Circular Head Wood Centre at Smithton, would be built in Braddon, the electorate of Resource Minister Bryan Green who is responsible for forestry.[Tasmanian Examiner, 17th Jan 2006]

Green, who has energetically protected Ta Ann, even travelling to Japan to fight criticism about the company’s false eco-claims, is now receiving blame for the expensive bail out by taxpayers.

Likewise, in the same speech, Sepawi praised the then Forestry Chief Executive Evan Rolley for always being on hand to assist in the deal, memorably dubbing him “Captain Evan Rolley”.

“Mr Sepawi next singled out for praise Foresty Tasmania head Evan Rolley, whom he dubbed Captain Evan Rolley for the way he drove his staff to efficiency. “No matter the hour of the night, there was not a time that we could not contact him,” Mr Sepawi said. “Thank you, to make us feel so welcome.” He said that Foresty Tasmania staff had done “a lot of work and forgone a lot of weekends” to clinch the deal”.[Examiner 17th Jan 2006]

Rolley, who has now moved to become Ta Ann’s Chief Executive is another person who has been singled out for criticism over costing the tax payer with this bail-out.

Ta Ann – a company with a poor reputation 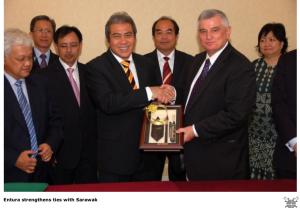 Readers of Sarawak Report have long been aware of the concerns over Ta Ann and its controversial Chairman Hamed Sepawi, rated as one of Malaysia’s richest men.

He is widely regarded as one of his cousin Chief Minister Taib Mahmud’s key business proxies in Sarawak, exploiting vast contracts and concessions  through companies such as Naim Cendara and Sarawak Plantation, as well as Ta Ann.

Sepawi also occupies key public positions such as Chairman of Sarawak Energy and formerly of the Timber Industry Development Corporation.

Ta Ann has been widely condemned for unethical treatment of the rights of Sarawak natives in their various enormous concessions and has also been struck off the investment list of Norway’s public pension fund (the world’s largest) following investigations. The pension fund follows criteria on deforestation and climate change issues when selecting its investments.

Sepawi himself was exposed by Sarawak Report for having transferred a huge multi-million ringgit acacia concession, granted by his cousin Taib to the Ta Ann group, into his personal ownership without informing shareholders.  The company, Grand Perfect, had razed to the ground the homes of local people on land which had been handed to the plantation.

Another of Sepawi’s privately owned timber companies, Atlantic Resources, has also been recently kicked out of Liberia (African Congo) for being involved in “massive fraud, misrepresentations, abuses and violations of the National Forestry Reform Law”, in the words of the country’s own President.

Given that Hamed Sepawi is also the head of Sarawak Electricity, which has been commissioning Hydro-Tasmania to work on the furiously contested plans to build 12 destructive dams in Sarawak’s Borneo Jungle, the enthusiasm amongst certain political quarters in Tasmania for keeping his controversial company operational in the state looks certain to continue to be a source of conflict. 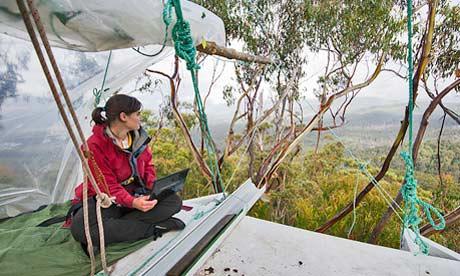