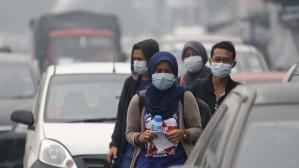 As predicted, the great palm oil agri-businesses were quick to blame small-holders for the smog that has engulfed the region in past days.

Doubtless, we can expect several small farmers to be rounded up and severely punished over the coming period.

On this site the very first comment to our story on the smoky problem came from one Hussaini Abdul Karim, who convincingly claimed to have spoken to the Chairman of Sime Darby.

He, of course denied major timber and palm oil businesses had a hand in the problem and blamed the little people:

“I spoke to the Chairman of Sime Darby Plantations, Tan Sri Dr Yusof Basiron, this morning and he denied that charge. He said the main culprits are the many smallholders who still resort to the old ‘slash and burn’ method who are located at the fringes of their (Sime Darby) plantations and the other major Malaysian companies owned plantations. They (the smallholders) number to a few hundred all over Sumatra! “.[post on SR]

Well, we learn today that the Round Table on Sustainable Palm Oil (the voluntary body that attempts to regulate the industry) has identified Sime Derby as one of three Malaysian companies responsible for the problem. 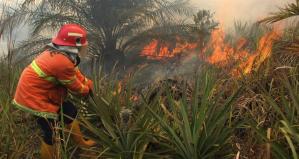 Further investigations will be underway, now that the RSPO has demanded detailed maps of these companies’ plantations in order to match them to NASA’s satellite imaging of the disastrous fires and there is already talk of appropriate penalties being handed out to offenders.

So much for the arrogant blame shifting by Yusof Basiron!

Given the arrests and harassment frequently meted  out on domestic farmers who are caught burning their rices patches, should we not expect something very fierce indeed to be directed towards this finger-pointing Chairman of Sime Darby?

After all, Sime Darby is largely owned by Malaysian Goverment interests and this Chairman’s management of it appears to have left people choking in great swathes of the country, quite apart from the environmental devastation caused by his core business.

But, of course, Sime Darby personnel and their big business friends are still hard at it blaming local farmers, as if before their massive companies started tearing down and burning the forests and peat areas, this sort of smog was ever a problem in the region:

“Plantation owners have to set aside 20 per cent of land to nurture smallholders in oil palm planting. It is a common practice for the smallholders to clear the land by fire” [Nor Hazlan Abdul Mutalib, executive secretary at the Association of Plantation Investors of Malaysia in Indonesia (APIMI)]

In which case, we ask why it is that some of the biggest oil palm plantations are among the culprits who have failed to submit the required annual reports to the RSPO, which is a condition of membership?

Is it any surprise that Sarawak’s massive Achi Jaya Plantations Sdn Bhd, largely owned and run by Taib’s pet Sibu timber tycoon Tiong Hiew King is among them according to a recent list drawn up by the World Wildlife Fund?

Environment NGOs have also pointed out that such is the negligence of the government of Abdul Taib Mahmud, Sarawak remains the only country left in South East Asia where deforestation debris on deep peat is still permitted. 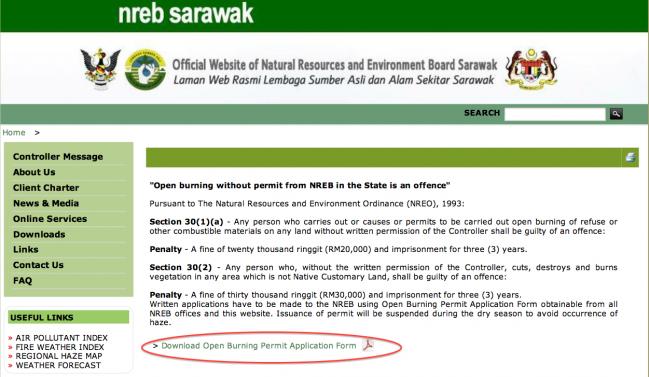 Fine if you pay for a permit!

Sarawak proposes to continue to allow this highly destructive practice until 2020.  The draining and burning of peat forest land is not only an environmental tragedy, it is notoriously hard to control and it releases vast and dangerous volumes of green house gases into the environment. 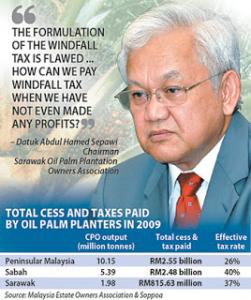 Another believable claim – Sepawi argues that there is no profit in his vast business, so they should be let off tax!

However, Taib still has his sights on the money-making potential of some of Sarawak’s remaining peat and mangrove areas, which he is steadily setting about destroying and turning into plantations.

Not least among these areas is the “virgin agricultural land” that he has put into the hands of his neice Nora Abdul Rahman, the MP for Tanjun Manis, which he plans to turn into a “Halal Meat Hub” in order to sell farm products to the Middle East.

Palm oil plantations are what Sarawak classes as re-forestation!

But today the world at least received an explanation for one of the greatest mysteries of Taib Mahmud’s administration so far, which has been his bewildering claim that over 80% of the jungle of Sarawak remains intact, despite all this blatant devastation and mega-industrial scale oil palm.

Because in the Borneo Post today his cousin and front man, head of Sarawak Plantation Hamed Sepawi, has made the truly astonishing claim that oil palm cultivation counts as re-forestation!

This surely beats even his earlier theories that the business should be let off taxes because they make no profits? 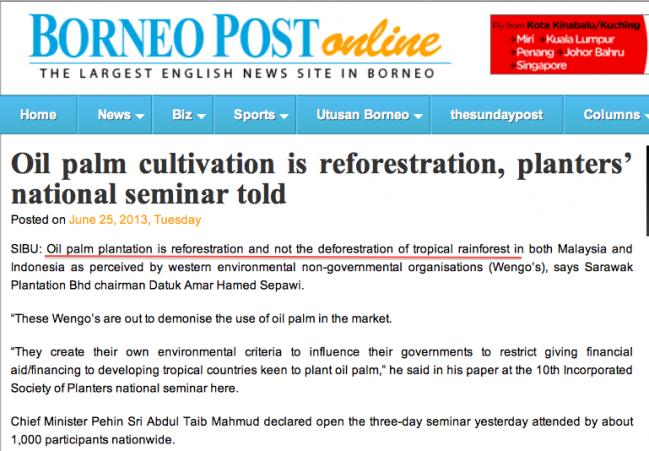 Simply astonishing. Hamed Sepawi defines oil palm as equivalent to the Borneo Jungle – will he next be claiming he has a high IQ?

So, what was once regarded as a laughable joke to explain Taib’s absurd claims about Sarawak’s forested areas has now been deployed as the actual argument being made by his chief proxy in the state.

Taib has defied the world’s scientific and NGO community (and indeed any schoolchild he might question) by classing oil palm plantations as re-forestation.  At last we have the explanation as to how he has claimed for so long that he has not destroyed the forests of Borneo!