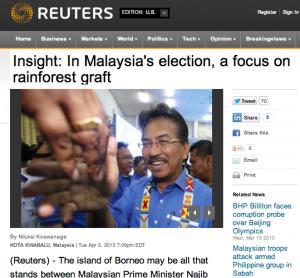 The world renowned Reuters news agency has published an explosive analysis of timber corruption in Sabah, triggered by the original investigations on this website.

Over the past year Sarawak Report has published numerous documents detailing the money laundering network that siphoned millions of dollars of timber kickbacks paid to Chief Minister Musa Aman, first into off-shore accounts and then into Swiss banks.

We had obtained bank statements showing the transactions of this criminal ring of people close to Musa, headed by a businessman named Michael Chia.

And we also had key documents produced by the Malaysian and Hong Kong anti-corruption authorities (the MACC and ICAC, who had investigated the issue) much of which we have made public online.

These documents traced the money laundering of around US$90million and showed which related tycoons had received timber concessions.

The key new information that has been produced by Reuters is confirmation that the documents published on this site were indeed genuine MACC and ICAC documents.  For months Musa Aman has been alleging our reports were based on elaborate forgeries and lies.

In another explosive development, Reuters also reports that two of the timber tycoons implicated in the investigation have now admitted to their news agency that they were indeed paying kickbacks to Musa Aman for the logging concessions.

According to the Reuters report, Malaysian anti-corruption agency officials:

“told Reuters the leaked documents obtained by Sarawak Report were genuine and Musa was, indeed, the focus of the investigation” [Focus on Rainforest Graft: Reuters]

This perhaps explains why the fabulously rich Chief Minister, who has publicly accused this blog of lies has failed to take any measures whatsoever to prosecute us in a court of law.

The Reuters article points out that the documents show “Musa consistently signed off on concessions that exceeded, or even doubled, the allowable timber cut” and that some of these concessions were given to his own brother, Malaysia’s Foreign Minister, Musa Aman.

“One of the Malaysian anti-corruption agency documents listed companies that won permits from the foundation. It shows the foundation awarded 2,000 hectares (7.7 sq miles) of primary forest to Musa’s younger brother, Foreign Minister Anifah Aman, at a special board of directors’ meeting on May 7, 2004.”

Anifah’s concessions were detailed in leaked MACC documents (above) that have now been acknowledge to be genuine by agency insiders. 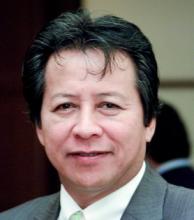 Reuters confirms the information provided by Sarawak Report that associates of Musa had set up accounts in Singapore through the Swiss Bank UBS’s Hong Kong branch into which many of these kickbacks were paid.

These associates were nominees of Musa Aman, most notably Michael Chia who was arrested by the Hong Kong authorities carrying $16million in 2008.

UBS is now facing a criminal investigation by the authorities in Switzerland in connection with the money laundering of these kickbacks.

The bank has already confirmed during a court case in Singapore  that the bank statements in our possession recording the kickbacks are indeed entirely genuine.  Also, that money was regularly drawn out of these kickback accounts by Musa’s own sons, who were studying in Australia.

Today’s Reuters article details the nature of the transactions into these accounts:

“Two timber firms in Sabah transferred two payments totaling $4.04 million on August 16, 2006 into the corporate UBS account belonging to the former Musa associate. Six days later on August 22, the exact same amount was transferred into a personal UBS account belonging to Musa’s lawyer [Christopher Barnes]. The Hong Kong anti-graft agency described that account as “held in trust” for Musa, according to the bank statements and investigation documents”.

“That same day, the firms won a 32,000 hectare (124 sq miles) timber concession and a contract to maintain a road to a logging camp, according to the Malaysian anti-graft agency document.

“The owners of those two timber firms confirmed to Reuters that the $4.04 million transactions were “donations” to Musa and UMNO to secure the contracts. They requested their names and the names of their firms not be identified”.

Sarawak Report has deduced from the bank accounts and documents detailing Sabah timber concessions in our possession that the owners referred to are the timber tycoon brothers Andrew and Freddie Lim, who are known to control Wayco Enterprises and Hillywell Inc and who were granted the Maju Sinar logging concession of 32,000 hectares on August 22nd 2006. 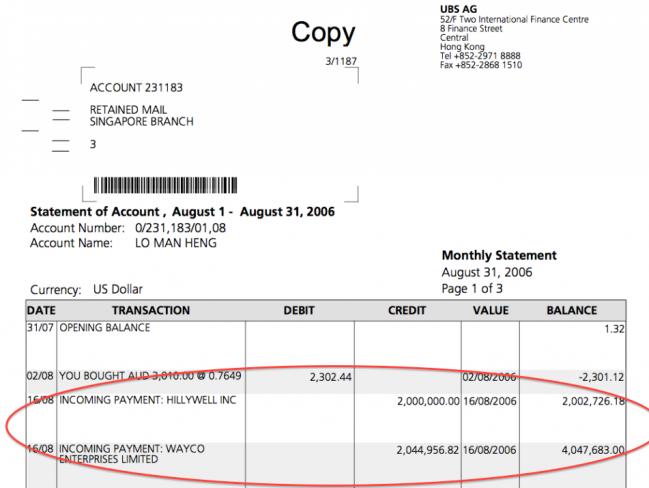 Reuters traced the payments registered in the bank statements and gained an admission from the timber tycoon owners that they paid kickbacks to Musa for the concessions granted days later.

The money transferred into the account above was then on 22nd August 2006 forwarded into an account controlled by Musa’s lawyer Christopher Barnes and “held in trust” for Musa, according to a letter in the possession of Hongkong’s ICAC investigators.

The information is laid out clearly in an ICAC document below, which has now been verified as genuine by Reuters’ investigations. 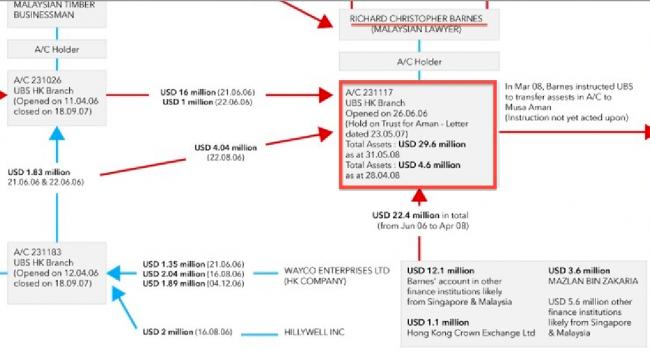 Confirmed as genuine. Excerpt from the ICAC document which shows the flow of money from the tycoon kickbacks into the account controlled for Musa by his lawyer Christoper Barnes. The day the money arrived in the account a timber concession was granted to the timber tycoons.

ONLY money for BN?! 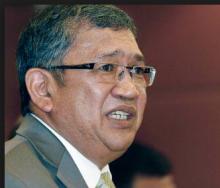 Musa Aman has predictably refused to step down or admit to anything at all despite the now overwhelming evidence that some US$90 million in timber kickbacks were paid into accounts controlled by himself.

The Chief Minister, who is a crucial ally of Najib Razak and BN, has relied on the support of his Sabah relative the Attorney General, who has constantly refused to act on the glaring evidence of the case.

Musa and BN’s story has changed dramatically over the past three years as more and more evidence has leaked out about the case. At first they denied everything and appeared to hope the matter had gone away after the term for investigations expired.

However, after Sarawak Report brought out more irrefutable evidence and the Swiss authorities opened their investigations BN suddenly and dramatically altered its tune.  Musa and his supporters suddenly ADMITTED the kickbacks had been paid, but announced the money had not been destined for Musa Aman, but for party funds instead!

The world is left wondering how on earth this new explanation provides any sort of excuse?

Half million riggit Hummer vehicle that was given by Musa’s side-kick, Michae Chia to the son of the PM’s spokesman Mohd Nazri, who declared Musa was innocent.

Why is is any more acceptable for a political party to accept hundreds of millions of US dollars in secret timber concession kickbacks than for the leader of that party to accept them directly?

Do BN leaders not understand that such an act is equally criminal or is it that these trained lawyers hope that the people of Sabah are so stupid and uneducated that they will accept the explanation that this is not equally criminal?

And are Musa and BN hoping that the same stupid Sabah people will not ask how it is that the very sons of Musa himself were able at will to draw out thousands at a time from these very accounts that are now being described as meant only for party funds?

Of course, the very reason that Musa is able to get away with making himself and his Foreign Minister brother fabulously rich at the expense of Sabah’s precious rainforest and its people is because they do pay a very large chunk of their kickbacks into the BN party coffers.

They have also taken care to keep key players like the PM’s Minister Mohmad Nazri on side.  Today the Prime Minister said unconvincingly that the matter would be “investigated”.

This is the money that BN will be spending the next three weeks pressing into people’s hands in Sabah.  A few ringgit to each poor voter telling them to vote for BN.  It is for the people of Sabah to make a judgement whether they are prepared to sell themselves so cheap and to be bought with their own money to allow the same bunch of kickback crooks to rob them of hundreds of millions of dollars again for the next five years.

On the other hand, BN does not like to leave such dangerous matters to chance.  Musa and his men will do their best to suppress the information in this report ever reaching the voters of Sabah.  They will also be doing their best to rig the result.

Their rape of Sabah’s rainforest and their exploitation of its oil has given them the funds they need to do both.