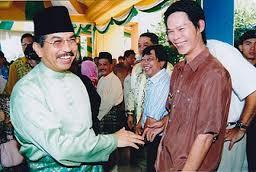 Thanks for the RM40 million my lad. Of course, nothing compared to the huge timber concessions and barging monopolies which I have offered your family. I hope you are still making regular payments to my sons and keeping up the rental on that house in Perth that I asked you to organise? Remember these are all perfectly proper political donations and I am no longer denying we do business!

UMNO have created so many contradictions with their various excuses that they must now produce some evidence.

The story started back on that date when it was reported that timber trader Michael Chia had been arrested with RM40million in his suitcase, on his way to Sabah from Hong Kong.

But now, suddenly, after four years of these denials, UMNO’s Mr Nazri has capitulated and admitted that after all the money was being sent by Chia to Musa. However not in a personal capacity but as a “perfectly proper” political ‘donation’.

Come on! Why didn’t Musa, Mr Nazri and BN/UMNO just say so in the first place?

Instead of playing President Clinton and saying as recently as April this year:

“Sure, I know Michael. He regularly gets timber licences from Yayasan Sabah, of which I am Chairman. Michael totally openly and appropriately wired RM40million over to my party, of which I am Chairman, back in 2008.  We really appreciated his above board donation. Feel free to look at our accounts?”[Musa Aman did NOT say this]

Consider all the missed opportunities Musa/UMNO have had to clarify the situation.  The arrest was first reported Way back in 2008. This was how the UMNO supporting Star Newspaper put it at the time: 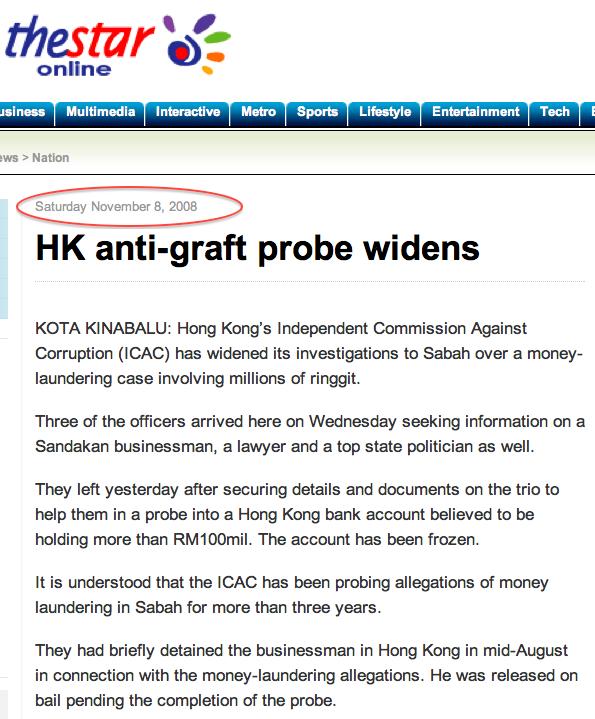 This was the perfect point at which Musa and Chia could have declared that there had been an unfortunate mistake and that this was certainly not a case of money laundering that Hong Kong authorities had been monitoring for three years. It was just a question of Chia popping a RM40 million ‘donation’ into UMNO’s account, quite above board, just as people do!

But, instead they started denying that Chia had anything to do with this money or indeed any business or political dealings at all with Musa!  Here was Chia’s statement to the UMNO supporting Daily Express back in August 2008, just a few days after the story broke: 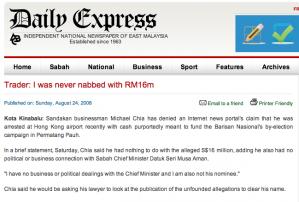 “No business or political dealings with Musa”, claimed Chia back in 2008

“In a brief statement, Saturday, Chia said he had nothing to do with the alleged S$16 million, adding he also had no political or business connection with Sabah Chief Minister Datuk Seri Musa Aman.

“I have no business or political dealings with the Chief Minister and I am also not his nominee.”

Yet, here we are four years later with UMNO now openly admitting that Michael Chia did after all make a RM40million/$16million donation to Sabah UMNO, which of course is Chaired by Musa Aman. There was a political connection after all.

Remember, right up till last week Musa was still claiming he had “no business association whatsoever” with Michael Chia.

Information they could not deny

So, what made them change their original stories?  After all it seemed for a few years that the first version would suffice.  The Attorney General Gani Patail (Musa’s relative) had refused to offer inter-country cooperation to Hong Kong and by 2011 the ICAC 3 year statutory limitation on such investigations ran out and it dropped the case (It is only BN’s Mr Nazri who is claiming the ICAC “cleared” Mr Chia, because the ICAC has yet to comment).

But then a large body of evidence, including Chia’s bank statements came into the possession of Sarawak Report. We have passed this material on to the Swiss Authorites, who have now opened a criminal investigation into their national bank UBS, who was handling Chia’s Hong Kong bank accounts.

We have also published a great deal of the evidence, which shows that Michael Chia was receiving huge sums of money from companies owned by timber tycoons as “deposits for logging concessions” and also that Chia was paying out money from the same accounts to Musa’s own two sons who were studying in Australia.

Can UMNO clarify whether it regards these payments to Musa’s sons as “political donations”?

Musa at first tried to insist the documents were forged and continued to allege that he had nothing to do with Chia.  However, two court cases and the Swiss announcement that their investigations included Musa Aman made this position increasingly untenable.

The first court case involves UBS in Singapore. Giving evidence, the bank acknowledged that it has indeed made payments to Musa Aman’s sons, out of the very accounts controlled by Michael Chia, which we had revealed, and for the same sums we indicated on the very same days.

The second court case is in Sandakan.  It is a prosecution against Michael Chia, who is accused by a timber tycoon Agus Hassan of suggesting back in 2004 that in order to gain a timber concession he would have to pay money to UMNO, because Chia was the “middle man” who could withhold the concession if he did not.

This case destroyed Chia’s claim that he has nothing to do with UMNO or politics or indeed that he does not work for Musa Aman. 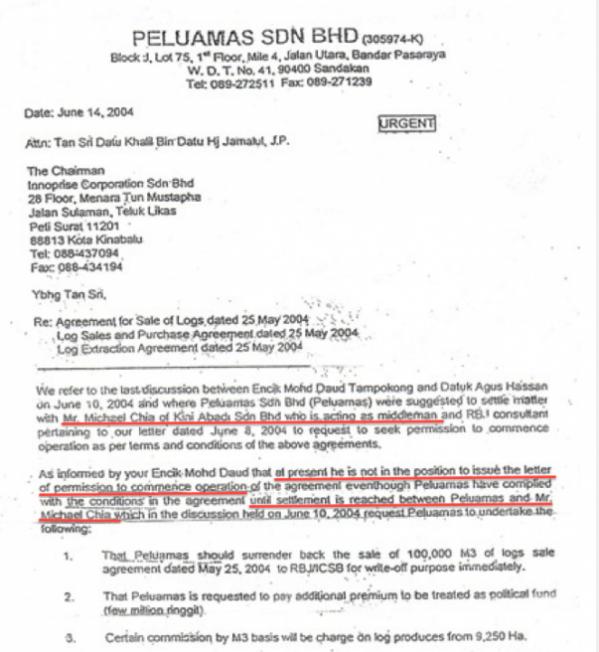 Evidence in the Sandakan Court Case shows that four years before the Hong Kong arrest Chia was accused of raising money for UMNO in return for logging concessions, acting as Musa’s middle man. This tycoon was angry because he says Chia took some of the ‘donation’ for himself.

So, because it has now been proved that Chia was giving money to Musa and it has been shown also that he was acting as a middle-man for Musa over timber concessions, the story about Musa not doing business with Chia became unsustainable.

Hence UMNO’s volte face (complete change of story) this week. They are now admitting the money did come from Chia and it did go to Musa. However, their new excuse is this was merely a “perfectly proper” RM40million ‘donation’ to UMNO.

Furthermore, Chia’s father has also been handed a monopoly barging contract for years!

Does a bribe or kickback become perfectly proper when it is a political donation?  If so what is the excuse for Chia’s standing payments to the Chief Minister’s sons from the same accounts?

Over now to Musa’s queue of panicking cyber-troopers, who want readers to cover their eyes and block their ears and chant, instead of facing facts. 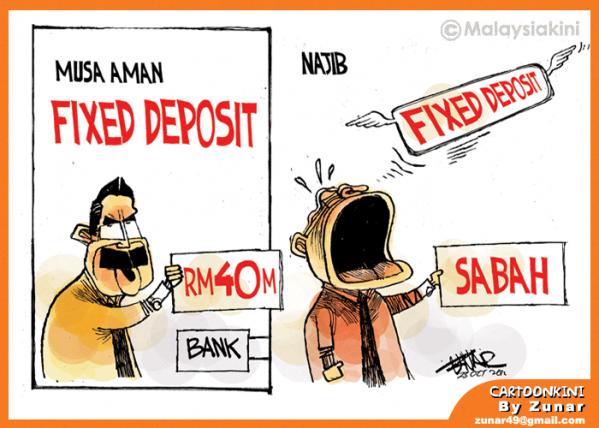 Cartoonist Zunar has his take on Musa!