Still Lying? BN's Poison Blogger Admits Some But Not All In The US 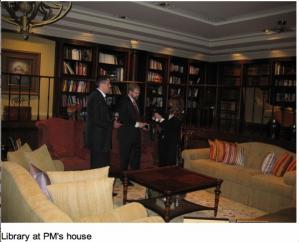 Didn’t know who I was working for – Josh photographed by his colleague in the home of Malaysian PM, Abdul Badawi

Josh Trevino and his team of ‘poison bloggers’ based in the United States have now publicly confessed to their campaign of slander against Malaysian pro-democracy figures, which was commissioned by BN and originally exposed by Sarawak Report [more here].

However, we can demonstrate that this notorious American blogger has continued to lie and obscure the full truth, pretending yesterday that he did not know who he was ultimately working for and failing to even mention his links to the Sarawak Chief Minister, Abdul Taib Mahmud in his official declaration. 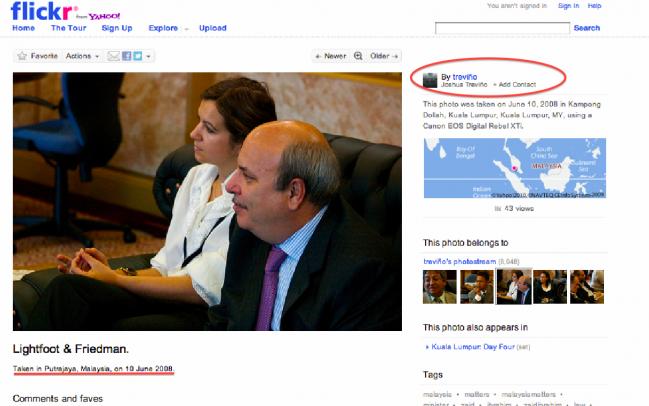 Who are we working for again? – Trevino photographs FBC Media bosses at their clients’ HQ …. in Putrajaya!

Earlier, Trevino had consistently denied that he was working for the Malaysians or that he and his bloggers were paid.  Speaking to the US commentator Ben Smith after our original expose in 2011 he declared that our article was “completely false”:

“I was never on any ‘Malaysian entity’s payroll and I resent your assumption that I was.”[Politico July 2011]:

Likewise, Trevino’s key blogger on Malaysia, one Christopher Badeaux, was even more emphatic, describing our suggestions that he was being paid as ” false, fantastic, and fallacious”: 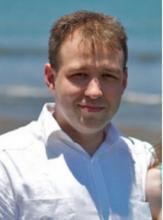 Christopher Badeaux forgot he had been paid a tidy USD$11,000

“On Ms. Rewcastle Brown’s specific allegation, I am not paid by Taib, Barisan Nasional, the government of Sarawak, the government of Malaysia, David Cameron, Tony Blair, Dick Cheney, Paul Wolfowitz, Donald Rumsfeld, Richard Perle, George W. Bush, Karl Rove, Rush Limbaugh, the Bilderbergers, the Illuminati, Opus Dei, or Santa Claus…. The New Ledger does not and has not taken any money from any politician, political party, or political party member, from any country, ever”

[Read the full Badeaux outburst on New Ledger, it is worth it!]

However, in the process of filing an official registration statement as a foreign agent, as required under US law, Trevino finally admitted to the authorities last month that he had indeed worked as a paid agent of the Malaysian Government.  The admission has been picked up by commentators in the US who have become increasingly intrigued by Trevino’s involvement in BN’s secretive ‘cyber-warfare’. 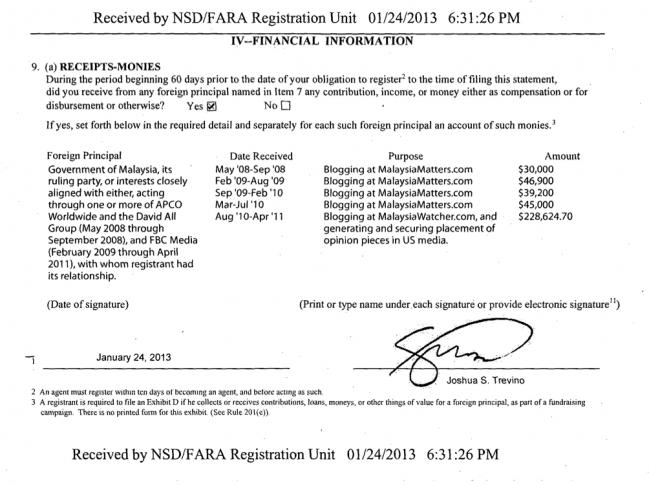 Trevino admits to the Anwar bashing site Malaysia Watcher, but why no mention of Sarawak Reports?

The declaration shows Trevino received a total of $389,724.70 for the job (RM1.2 million), out of which he paid a team of bloggers to attack figures like Anwar Ibraham and promote first Prime Minister Badawi, then Najib Razak.

Also listed is exactly how much he paid each of his bloggers out of that money from the government of Malaysia.  It includes $11,000 paid to the fallacious Christopher Badeaux! 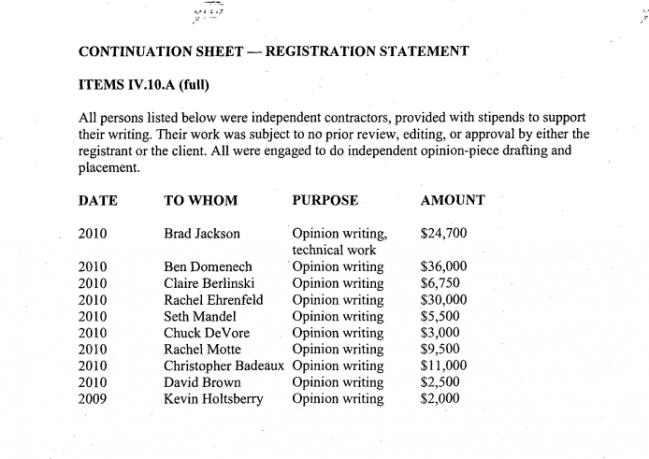 From Trevino’s declaration as a foreign agent

But Trevino still left plenty out of his mandatory statement to the US authorities, failing to mention anything of his highly embarrassing further involvement with Sarawak’s Taib Mahmud, for whom he was also acting as a foreign agent.

Trevino’s services for Taib included the setting up of the so-called Sarawak Reports website, which mimicked and attacked our own site and attempted to defame and discredit the editor.  After our exposes it was pulled off the web.

There were also a series of distributed denial attacks on our server during the 2011 Sarawak state election, which continually brought down the site over the two week period before the polls. Trevino fails to mention any of these activities or how much he was paid for his part in them as part of a separate, rolling $5million a year contract negotiated by FBC Media with Chief Minister Taib Mahmud.

For him to deny this involvement now rings as hollow as blogger Baddeaux’s protestations back in 2011 that the “allegations are ludicrous, and denied”. 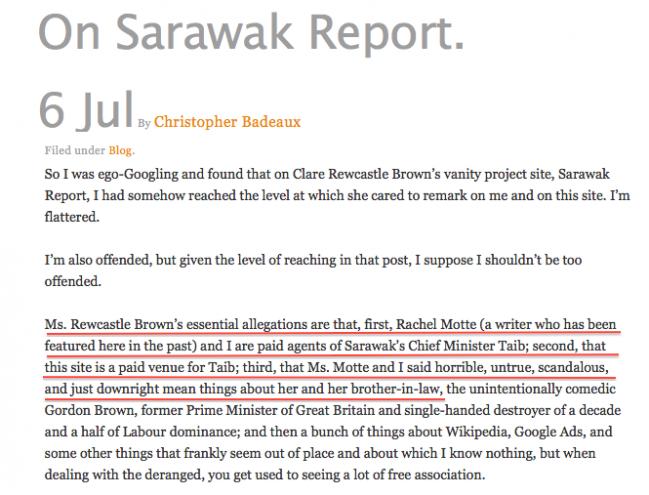 Didn’t know who I was working for 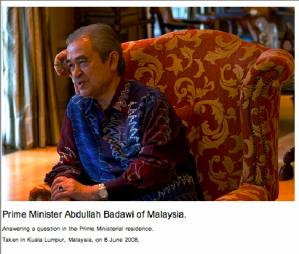 Photo of Badawi being interviewed at home taken by Josh Trevino – “never had contact with the client”?

Just as unconvincing are Trevino’s current claims that he did not really know he was working for the BN Government of Malaysia.

In particular he told a US columnist yesterday that he never had contact with “the ultimate client”.

And yet Trevino and colleagues had uploaded photos of themselves attending a session with Prime Minister Badawi in his own house in 2008 and interviewing him along with Zaid Ibrahim, then a Minister in the PM’s Department.

Trevino wrote a gushing article in the BN commissioned website Malaysia Matters about how the Prime Minister had made him and other journalists breakfast, completely undermining his current claim that he “never had contact” with the “ultimate client”

Trevino has subsequently eradicated all his gushing material from Malaysia Matters, you can access it via our link beneath this article 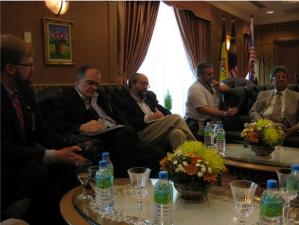 Trevino had also during the same period invited several US bloggers to join a paid-for Malaysian holiday junket at the expense of the state in return for recording their enjoyable activities.

Later when FBC Media hired Trevino, as part of their contract to promote Najib Razak, Trevino was soon writing articles in his specially tailored site New Ledger and elsewhere promoting the new PM and denigrating Anwar Ibrahim’s friendly links with America, an activity he also extended into articles commissioned by mainstream newspapers in the UK and US, who had no idea he was in the pay of the Malaysians.

“The man whom Anwar seeks to replace, Prime Minister Najib Razak is far more friendly to American policy goals than is Anwar himself (We’ll leave aside here that Anwar’s opposition-coalition partner is the Islamist PAS, which solicited volunteers for the Taliban after 9/11″

Trevino in New Ledger – Why so keen to promote an image of Anwar that would repel the Americans?

So, does Trevino really expect people to believe he had no idea who was ultimately funding his slavish pro-Najib and pro-BN articles?

Josh was even included in a number of paid for PR events set up by FBC as Najib set about portraying himself as a ‘moderate Muslim’ whom America should support, as opposed to ‘dangerous’ Anwar Ibrahim.  This included an invitation to a BBC World Service Debate in Istanbul where Josh popped up to ask a helpful question for the TV cameras. 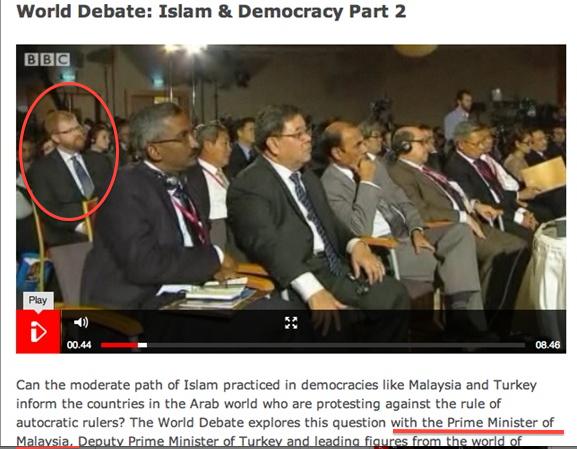 Josh soon leapt up to ask a question of Najib, who had financed the event through FBC Media by whom Josh was employed.

Indeed, if they were not paid why would a bunch of American bloggers spend so much time ludicrously lambasting Anwar Ibrahim, who is a relatively unheard of Malaysian opposition figure in the States, but who has a liberal and academic reputation and is close to many democrats in the West?

Bloggers like Badeaux reached such levels of invective, as they so clearly sang for their supper, that the effect was ridiculous to any objective reader (outside of BN). 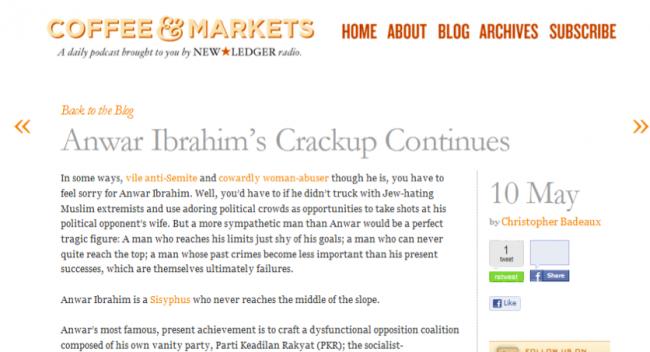 Trevino has now stated that he should have told the truth after Sarawak Report exposed his activities in July 2011:

“When Ben Smith contacted me in July 2011, I ought to have come clean with him at the time,” [Buzzfeed]

But it looks like we are still waiting to hear the full truth about his relationship with BN and its campaigns of online subterfuge.