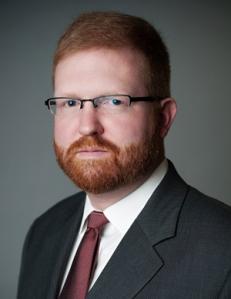 "My red hair and my pale skin IS my passport - bureaucrats!" - racist outbursts by Taib and Najib's hired blogger on Twitter!

The dirty blogger behind numerous websites commissioned by BN to defame Anwar Ibrahim and also Sarawak Report, has now been sacked as a commentator in the US by the prestigious Guardian Newspaper.

The Guardian cited our exposes of Josh Trevino as evidence of his unsuitability as a writer in their statement confirming his dismissal last night.

In what was described as a ‘mutual agreement to go separate ways’, Trevino accepted that he had not declared his interest as a “consultant for an agency that had Malaysian business interests” or his role running the pro-BN website Malaysia Matters, when promoting Najib Razak and attacking Anwar in articles published not only in the Guardian newspaper, but also in the Washington Times and Huffington Post. [see http://www.buzzfeed.com/buzzfeedpolitics/guardian-splits-conservative-writer-over-malaysia].

Our investigations have already established that the agency he is referring to is the discredited UK-based TV Production company, FBC Media, which was closed down after we revealed it had been paid RM84million (USD$27million) by Prime Minister Najib Razak’s private office to promote his image abroad and in Malaysia. [see our FBC Media stories as well as UK Independent Newspaper coverage of the scandal and the BBC’s apology]

FBC Media was also hired on a RM15million (USD$5million) a year rolling contract by Taib Mahmud, specifically to counter the investigations of Sarawak Report and to conduct a dirty campaign to discredit its author and her family, which included the former British Prime Minister Gordon Brown. 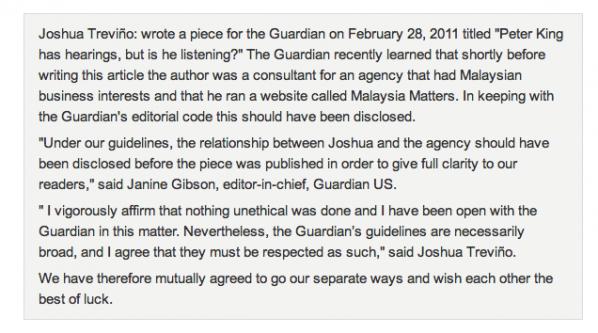 "Nothing unethical" - Trevino finally admits he was working for Malaysia, something we exposed last year!

Trevino was promoted as the Guardian’s new right-wing commentator in a press statement on 15th August.  The paper would soon have realised that the appointment was ill-judged after it provoked a storm of protest because of Trevino’s extreme and aggressive right-wing views.

These views, which we have already recorded in Sarawak Report, are virulently pro-Israel and anti-Muslim.  For example, Trevino had called upon the Israelis to shoot dead the civilians who had joined the Palestinian ‘Mercy Flotilla’ to bring aid and food to that community.  These civilians included US citizens and also Malaysian citizens, whom Najib Razak later praised as heroes.

Trevino has also gloried in being ‘pale skinned’.

So, why, we have queried, did Taib Mahmud and Najib Razak find it appropriate to hire a person with these public standpoints, given they are Muslim leaders whose own policies are so virulently anti-Israel?

Perhaps it is because if you want dirty work done you need to hire someone prepared to do it? 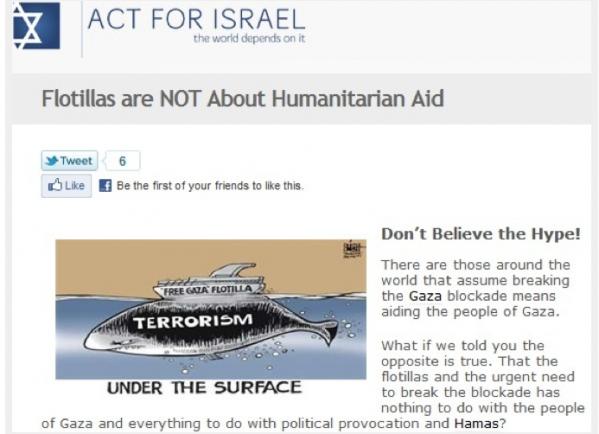 The US group Act For Israel portrayed the Palestinian mercy boats as terrorists like Nazis. Josh Trevino is on the organisation's Advisory Board

Sarawak Report has received inside information, corroborated by extensive evidence, that Josh Trevino was hired by FBC media to conduct a defamation campaign against this blog and against Anwar Ibrahim as part of the two contracts with Najib and Taib.

Meanwhile, FBC Media was abusing its position as a production company with outlets on the BBC, CNBC and CNN to promote these Malaysian clients as well as other dictators who were paying them, such as Egypt’s Hosni Mubarak, President Nursultan Nazarbayev of Kazakhstan and Gulnara Karimova, known as the ‘World’s Worst Daughter’ of Uzbekistan.

'Strategic' - part of the $5million a year contract between FBC Media and Taib Mahmud to improve his image in the face of criticism from Sarawak Report!

Trevino, who acts as a political consultant and speech writer to right-wing politicians in the US, runs a right-wing website called Red State.  He also has a sideline called Rogue Strategic Services, designed to: 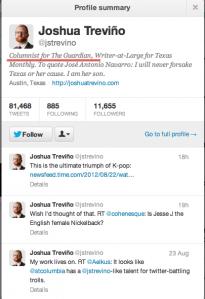 'Columnist for the Guardian' - how was Josh Trevino planning to use his new found respectability?

In this capacity he set up blogs to attack Anwar and Sarawak Report in the US and in Malaysia.

The blog New Ledger (now pulled down from the web) was based in the United States and was openly linked to Red State, posing as a political website authored by “volunteers”.

In fact New Ledger was obsessed with Malaysian affairs and 50% of its content was devoted to attacking Anwar  or Sarawak Report.

Trevino also constructed two other key sites.  One was www.sarawakreports.org, designed to mimic our own site and to attack and defame it in the process and the other was Malaysia Watcher, which attacked and brutally defamed Anwar Ibrahim, calling him a sodomist, “vile anti-semite” and “abuser of women”!

Articles posted first on New Ledger were then “bounced” onto Sarawak Reports and Malaysia Watcher as if they reflected genuine mainstream political opinion in the United States!

BN -friendly newspapers and the BN controlled News Agency, Bernama would then also pick up on these articles and disseminate them throughout Malaysia.

'Bouncing back international recognition into the local press' and 'countering falsehoods about corruption'. An excerpt from FBC Media's International Strategic Communications Proposal to Taib Mahmud! Josh Trevino was the 'consultant' FBC used to set up its "special blogging" operation

Never once did Trevino or any of these publications acknowledge that this was all a paid-for negative PR campaign being funded by Malaysian taxpayers.  It was when Trevino took the process a step further and tried to get his paid-for promotional material into mainstream newspapers, also without declaring his interest, that he created his own undoing.

It was on these grounds that the Guardian hastily terminated his contract yesterday. 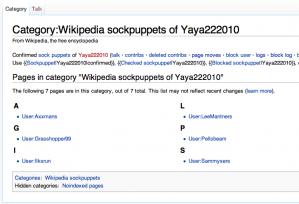 But we have evidence that activities linked to FBC’s and Josh Trevino’s “special blogging” operation also extended to deceptive tampering of Wikipedia sites linked to Taib and Sarawak Report.

These activities were all clearly and maliciously designed to discredit Sarawak Report and other critics of Taib and BN and they even implicated the former UK Prime Minister Gordon Brown, who was also defamed in the process.

Beginning on 30th March, shortly after FBC’s Sarawak campaign was launched, a single operator with the concealed identify Yaya222010 started tampering with a series of Wikipedia sites in what is known as ‘Sock Puppet’ activity.

First, they created a Wikipedia entry for Sarawak Report Editor ‘Clare Rewcastle Brown’, focusing on some false accusations which were made during the so-called Parliamentary expenses scandal in the UK. Those accusations had all long-since been retracted by the newspapers, with substantial damages having been paid for libel. 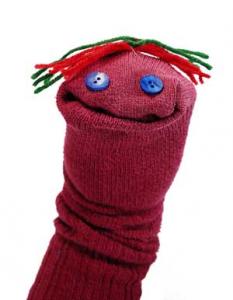 Also on the same day, the same Yaya222010 went about altering the existing Wikipedia entry for Andrew Brown, husband to Clare Rewcastle Brown.

Yaya222010 added content that repeated the expenses libel and also created a new link from his site to the entry they had created against his wife Clare. They also added further links to Sarawak Report(s).

The clear purpose of this malicious activity was to lead readers to the conclusion that the long-since discredited and withdrawn allegations about Andrew Brown were in fact true, despite the substantial libel damages that that the Browns have already won.

The same dirty tricks were even played by the same operator on the same day against the Wikipedia website of the former UK Prime Minister, Gordon Brown. Yaya222010 linked his site to their Wikipedia entry about Clare Rewcastle Brown and also to Sarawak Reports.org, where he is further defamed in a number of articles.

That very same day Yaya222010 also linked Taib Mahmud’s own Wikipedia site to their entry on Clare Rewcastle Brown in an effort to give the impression that criticism of Taib was made by discredited people!

Yaya222010 made positive al!terations on Taib's site on the same day and linked to Sarawak Reports

Other Wikipedia pages that were tampered with that day by Yaya222010 include site of the famous Malaysian opposition blogger, Raja Petra Kamarudin. Yaya222010 also linked his site to Sarawak Report(s) where he is shown as attacking Anwar. 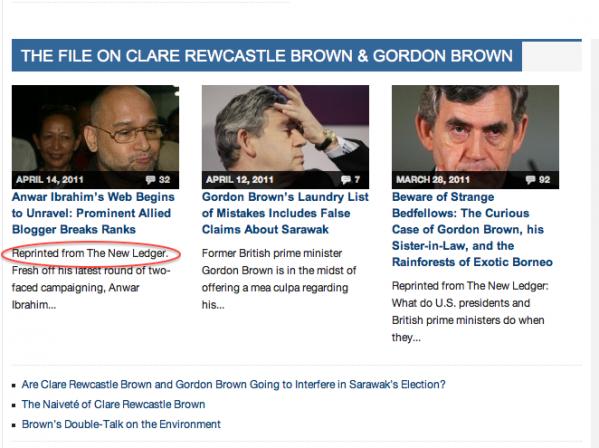 There can be little doubt that these activities were part of a deliberately orchestrated and malevolant campaign to attack the author of Sarawak Report on behalf of Taib Mahmud, much in the way that was promised in FBC Media’s contract.

Wikipedia have now confirmed that Yaya222010 was indeed a sock puppet and have conducted an investigation into its activities.  Wikipedia’s report shows that it has also linked Yaya222010 to other subsidiary sock puppets which in August last year were actively trying to erase information about our exposes about FBC President, CNN’s John Defterios and FBC Chairman, Alan Friedman from the web!

“These new accounts (apart from the sockmaster) and IPs originating from London and Overland Park, KS, have been editing three articles – Clare Rewcastle Brown, John Defterios and Alan Friedman – for the past few days trying to remove coverage of a controversy involving Defterios and Friedman and making subtle negative POV edits to the Brown article. Recently, Brown implicated FBC Media in a controversy, while Defterios & Friedman are/were among the most senior people running FBC. Since story broke, there has been a coordinated attempt by these accounts to remove coverage of the controversy on the Defterios & Friedman pages. — Yk ʏк yƙ talk ~ contrib 00:31, 8 August 2011 (UTC)“[wikipedia investigations]

FBC Media closed, after our exposes last year caused the BBC and CNBC to sever their contracts.

Would the Chaiman, Alan Friedman, President, John Defterios and blogging ‘Consultant’, Josh Trevino care to deny involvement in this sock puppet activity that was all linked to the sites they set up on behalf of Taib Mahmud?