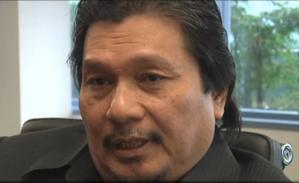 Freedom of information requests in Australia have recently brought to light the full, unedited interview of SEB Board Member and spokesman, Idris Buang, by the TV programme Dateline, about Sarawak’s mega-dam plans.

And his arrogant and incautious remarks, which disparage the native way of life of many of Sarawak’s indigenous tribes, have brought gasps of amazement and outrage.

Among a series of slurs, he says on behalf of SEB:

“We don’t want to be jungle warriors, poachers and simple people. We are blessed to have inputs from experts, from Hydro Tasmania and Norway for example…. there is a need to have all these dams that we planned for, in the interest of Sarawakians and Malaysians as well”

The former Senator also takes a swipe at the Swiss environmentalist Bruno Manser, who studied and befriended the jungle-dwelling Penan people, before he angered Taib by criticising the wholescale logging of Sarawak and subsequently went missing in 2001.

Buang mocks Manser for acting like “Tarzan” by living with the Penan:

“We don’t want to be as romantic as Bruno Manser.  He is going the other way around. We don’t want to be Tarzan…. these are just fairy tales, these are stories good to read, not good to live…We have a moral and legal right (responsibility) to emplace them [the Penan] in better positions”

“We want to move ahead to take the challenge from the modern society of the world.. and there is another option, do nothing, train our children the law of the jungle, survival of the fittest, go backwards and become cavemen”.

The most striking aspect of the interview, during which Buang frequently contradicted himself, was that the SEB spokesman, who was so confident about what the right solutions were for other people, seemed to have almost no grasp at all about the actual plans and arguments in favour of SCORE.

The Board Member of SEB was forced to turn during the interview to advisors from the company Hydro Tasmania to find out when the construction is due to begin on the proposed Baram Dam, which will flood tens of thousands of people from their homes.  The answer they gave was 2014. To which Buang commented:

“As it is, it has to go on. As I said the need to have all these dams that we planned for, overrides any other thing, you know, in the interest of the greater good of Sarawakians:.

By this he made clear there is no choice facing native people threatened by the dams, yet throughout the interview he gave no clear explanations as to why the dams were necessary or what the provisions for consultation and resettlement might be.

Who could trust such woolly bluster from a man who clearly knows little of what he speaks?

SEB are playing with the lives of thousands of people and the destruction of the environment of Sarawak and yet they put up a spokesman who, when asked why the people of Bakun have not received their compensation a decade late, remarks:

“they ought to receive the amount, unless something happened along the way”

Does he consider this to be a satisfactory answer?! 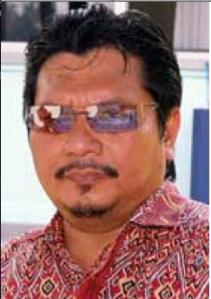 It is clear from Idris Buang’s remarks that he is as ignorant about Malaysia’s obligations under the United Nations Declaration on the Rights of Indigenous Peoples (UNDRIP) as he clearly is about the planned timescale for the dam programme; the economic viability of the project and indeed the disappearance of the promised compensation money to people displaced by Bakun!

The modern world, which Buang claims to be a part of, no longer refers to indigenous people as ‘cavemen’, ‘jungle warriors’, ‘poachers’ or ‘simple people’.

Nor does modern practice involve telling such people what is good for them without consulting them and gaining their support.

And it is certainly not acceptable to first licence out their lands and strip away their livelihoods by logging, then leave them to starve for several years with no state support, education or democratic rights  and finally tell them they have to leave on the basis of dodgy promises without guarantees.

Anyone looking at Sarawak’s record on fulfilling its promises towards native people, would not trust Taib’s own signature in blood on any of the promises Buang has been making about a “better life”.

By riding roughshod over these fundamental principles of indigenous rights it is the State of Sarawak has acted in a backward manner.

And through his remarks Buang has shown that it is HE who is old-fashioned, not the angry natives who want proper consultation and proper compensation.

The numerous violations of several international protocols by Sarawak’s dam projects have been laid out in the Bruno Manser Fund’s recent report Sold Down the River (excerpt below). 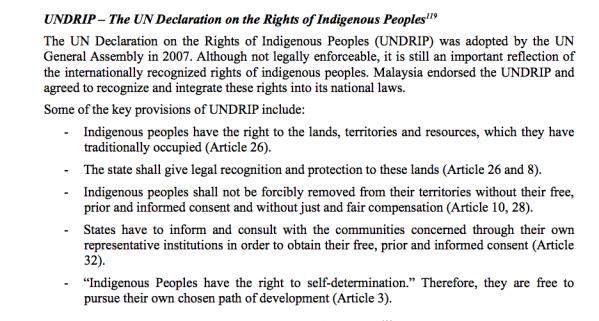 The UNDRIP principles that Sarawak and SEB have ignored by secretly starting construction of Murum, failing to give proper consultation to the natives and refusing them any choice, as expressed by Idris Buang in his interview.

“I would not stand the smell of corruption”

There is one clear good reason for building 50 dams in Sarawak. This is that it gives the Finance Minister (Taib Mahmud) the opportunity to borrow billions of dollars on behalf of the State, which can then be largely funnelled into his own companies, leaving the taxpayers to pay the money all back at a later date.

Huge contracts are already being assigned by SEB (whose Norwegian CEO was confirmed by Buang to be earning more than the extraordinary sum of $4million a year for the job) to firms owned by Taib and his family.  The RM90million cable contract from the Bakun Dam, which has gone to Taib’s son Abu Bekir, being a notable example.

Yet, Buang makes great play in the interview that corruption does not exist in this project!  His exaggerated protests on the subject are perhaps the most comic aspect of his entire foot-in-mouth interview.

“I for one would not stand the SMELL of corruption” protests the saintly Buang!  “I am also a member of the Audit Committee I am ALLERGIC to it. You can rest assured we have all the processes in place”.

However, when pressed on these “processes”, Buang reveals how as a member of the Audit Committee he is as ignorant of proper procedures when it comes to the handing out state contracts as he is ignorant of so much else.

On conflicts of interest, such as the handing out of multi-million contracts to companies owned by Taib’s son, Buang blithely explains:

“The CM is an institution that runs the Cabinet. If there is any conflict of interest he must walk out of the room and the same goes for anyone else”!

Who do these guys think they are kidding?  To make matters worse Buang then went on to slander a number of world leaders, whom he effectively accused of being equally dishonest in office:

“I believe you have heard of George Bush, Bill Clinton, Margaret Thatcher sort of peoples, they have contracts with the government somewhere, somehow, but you can’t stop people from doing business.”

Hydro Tasmania ‘should get out of Sarawak’

Despite the string of gaffs, Buang’s interview was nevertheless prepared by one of the Tasmanian ‘secondees’ to SEB, Vice President Nick Wright (Communications, Brand, Resettlement), as he informed his real boss, Roy Adair, CEO of Hydro Tasmania in a email.

A briefing well done? – the email was revealed under Freedom of Information proceedings

Yet, as we have seen, the interview revealed appalling ignorance and prejudice by this SEB Board Member against the native people, who stand to suffer from Taib’s greedy and vicious projects related to SCORE.

Do the people of Tasmania really want to be associated with such projects and such attitudes?

The same Nick Wright then guided SEB when they wrote a letter of complaint to support Hydro Tasmania’s protests against the Dateline programme, which had in fact left out most of Buang’s offensive remarks. 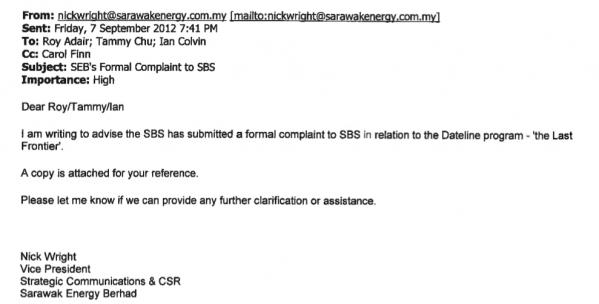 Writing from SEB (corrected) to SBS. Nick Wright puts it all past his real bosses in Tasmania 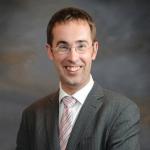 Given that this process has now revealed the full and awful truth of Buang’s previously edited remarks, it is clear that SEB would have done better PR job by keeping quiet instead of complaining to SBS.

The issue highlights the growing questions about the ‘partnership’ between SEB and Hydro Tasmania and the role of the Tasmanian secondments to SCORE.

The Bruno Manser Fund today issued a new statement calling for all Hydro Tasmania’s personnel to exit from Sarawak, following the news that the Project Director for the Murum Dam project, Andrew Pattle, already left at the end of last month and has returned to work for Hydro Tasmania.

Pattle’s position had been heavily scrutinised and his departure followed extraordinary denials by Roy Adair that the company is “not involved in flooding rivers and displacing indigenous peoples” Sarawak or in the Baram Dam project, despite the fact that Pattle had assumed the title of Managing Director for the Baram project and also held the role of Senior Technical Manager, Hydro Electric Projects for SEB! 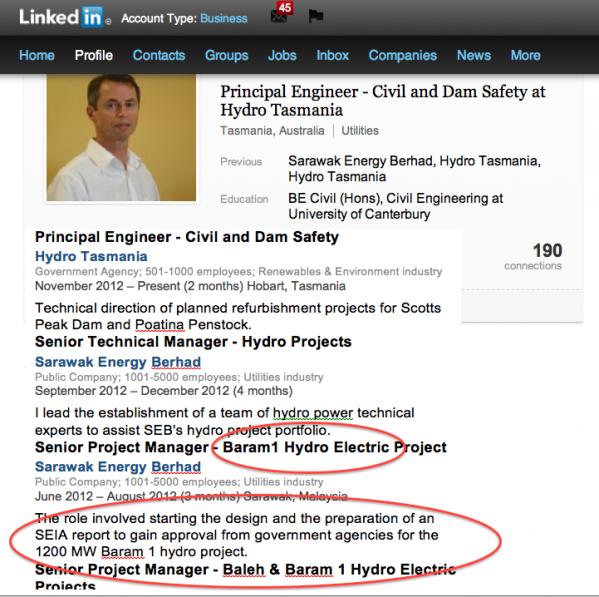 Nothing to do with ‘flooding’ Sarawak or the Baram Dam?

Was it embarrassment over Hydro-Tasmania’s conflicting denials that caused Pattle to abandon his key role at Murum and return to be the ‘Principle Engineer’ at Hydro Tasmania?

BMF has called for greater transparency and for Hydro Tasmania to stop playing down a project that has involved several of its most senior personnel in Sarawak:

The NGO asks who is lying:

“Hydro Tasmania is not involved in flooding rivers and displacing indigenous people. We are not providing consultancy services on the Baram Dam project. A simple check of the facts with us would have established that.”

So who is lying, Andrew Pattle or his boss Roy Adair? [BMF Statement]

NGOs are also asking why the CEO of Hydro Tasmania has also shown lamentable ignorance when it comes to statements about Sarawak?  In his own interview with Dateline he declares:

“We have no experience of any corruption whatsoever in SEB.  Let’s also recognise that this is a democratic society in Sarawak and they have the right …. to vote the next party in at the next election” [Roy Adair, CEO Hydro Tasmania]

However, if Mr Adair had bothered to read the official Resettlement Action Plan reports produced for the up-coming Murum Dam project, he would have noted the detailed account of the problems facing the affected native people in their efforts to register for their IC cards and therefore the vote.

Due to wilful official obstruction, very few of the indigenous people people of Sarawak to be affected by the dams have been allowed to receive voting rights by Taib Mahmud’s government, despite strenuous efforts over many years.

This is a scandal and Hydro Tasmania’s executives should stop pretending all is well with this contract and start taking on board the criticism about their involvement in a corrupted and unnecessarily destructive mega-project.