Doesn’t tolerate criticism – even from experts?

Taib has descended from his pedestal to engage with critics of his ‘great leap forward’ plan to plonk 50 hydro-electric dams across Sarawak’s rivers.

That is to say, he has raged at unnamed persons from his platform at the DUN, who dared to say that he might not have had such a good idea with these dams.

After all, some people have even gone to far as to complain about the suffering to be inflicted on tens of thousands of people about to be driven from their homes.

According to Taib, anyone who criticises him in this way, be they a blogger, NGO or humble native protestor, is guilty of nothing less than “Economic Sabotage”!

The ageing kleptocrat has announced he will not ‘tolerate’ it and further accuses this “handful” of opponents of being funded by evil foreign interests, who are striving to hold back Sarawak’s glorious economic progress.

“Increasingly, we notice that negative actions are being organised in Sarawak to gain global attention and a handful of local organisers seem to lead this opposition to get funding from foreigners” [Chief Minister, Taib, speaking in the DUN Assembly] 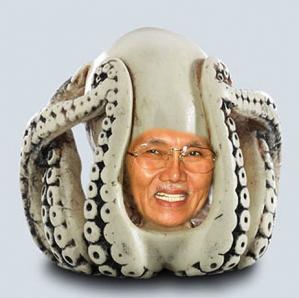 In his speech Taib spoke of foreign organisations who “spread their tentacles”. Ironically, tentacles are the cartoon concept most associated with Taib himself, who has spread his tentacles into every nook and cranny of the Sarawak state economy.

But, how come Taib Mahmud’s grand economic plan is such a delicate flower that it wilts in the face of just a whisper of protest by a “handful” of people?

If the good reasons are so compelling for these dams and the benefits for the people of Sarawak so obvious, why is the democratically elected Taib Mahmud so angry and sensitive about having to argue his case?

Surely it is not so detrimental to his visionary projects that they face some healthy criticism?

Unless, maybe, the effects of that criticism has been to send doubt into the minds of crucial funders and backers for his plans?

Could it be that the world of bankers and lenders and specialist consultants are having second thoughts about their partnerships with the corrupted and autocratic regime of Abdul Taib Mahmud, now that protests are being heard?

Is, for example, the International Hydropower Association beginning to wonder whether their 2013 showcase conference in Kuching is such a good idea after all?

It certainly seems as if Sarawak Energy’s (SEB) once touted “partnership” with Hydro Tasmania is suddenly being played down almost to non-existence in Australia.

Hydro Tas’s CEO, Roy Adair, and Chairman, David Crean, used to enthuse loudly about their subsidiary Entura’s involvement in Sarawak.  Adair has described SEB and its owner, the State of Sarawak, as being led by people of the “highest integrity” and boasted about their programme of secondments of staff to help SCORE.

Now it turns out that the Australian state-owned company regards its involvement as “minimal” and spokesmen have said SEB was “wrong” to emphasise the importance of it in its annual reports.

“It is nonsense to suggest [the seconded staff] are key to Sarawak Energy Berhad undertaking its program,” CEO Roy Adair told NM. “Critics are deliberately inflating their importance as part of the campaign”.[New Matilda, Australia 29/11/12]

Likewise, a few years back, Hydro Tasmania featured the role of one of their staff, Andrew Pattle, as a “secondment” to SEB “and part of an agreement to build the skills and expertise of the state owned business” in their own Annual Report.

Pattle is currently Project Director for the Murum Dam and Senior Project Manager for Baram and Baleh Dams.  However, again Hydro Tasmania are now changing their story and letting it be known that Pattle is no longer linked to their company. [UPDATE – It has emerged that Mr Pattle left SEB just a few days ago and has returned to a job at Hydro Tasmania.  This re-enforces the point that these ‘secondees’ are in fact employees of Hydro Tasmania]. 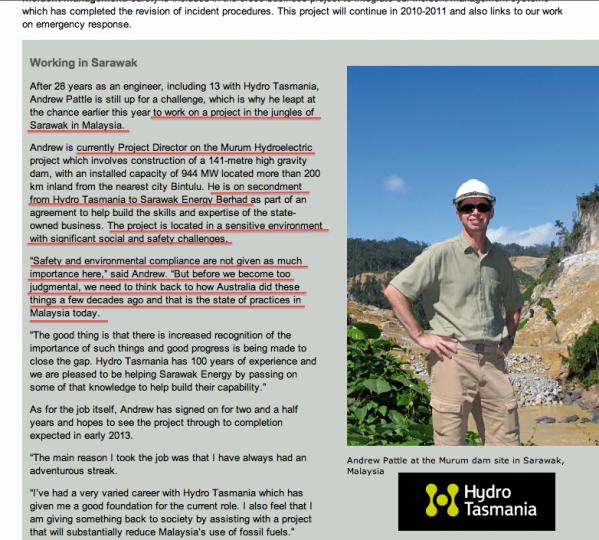 The other major funders for SCORE include Deutsche Bank Asia, who are joint investors in Kananga Investment Bank with Taib’s own company CMSB.  Are such key multi-national banks also beginning to wonder if this involvement is clever?

And what about Britain’s top rung building society and Asian investor, the Prudential, which also holds bonds in SEB – might they be worrying about the ethical issues by now?

Is this why Taib has suddenly stopped ignoring the desperate protests of all the natives he is planning to flood out of their homes and starting taking notice? 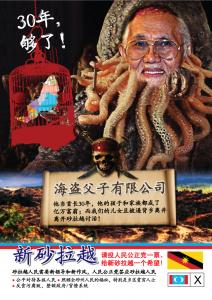 More Taib tentacles – the Chief Minister knows about making himself rich. However, his record in Sarawak is that Malaysia’s richest state is home to many of its very poorest people

Taib would have of course avoided so many of the questions now besetting SCORE if he had entered into the proper processes before embarking on one of the largest industrial projects in Asia and destroying Sarawak’s river systems.

The arguments being heard now should have been resolved before he even started tearing out the forests and blasting through mountains.

However, rather than making out a proper economic case Taib just went ahead without consulting anyone.

In fact he went ahead with Murum in secret for two years, presumably because he realised there would be so much outrage at his proposals!

This means that SCORE has received none of the scrutiny or expert input that might have refined and improved what has essentially been the ‘brainchild’ of a very old and dictatorial ruler.

As a technical study by the Yew School of Public Policy in Singapore points out:

Such failings pointed out by a top institute present a horrible warning over this project, which has gone unquestioned, because of the deluded ambition and greed of a pampered dictator, who has got his own way for the past 30 years.

Past history is littered with disasters of a similar nature, brought about by strong men without patience or expertise, who refused to be questioned and who accused sensible critics of things like “economic sabotage”.

Look at the “Mega-rice Project” forced on Kalimantan by Suharto, who refused to listen to the experts who said that rice could not grow in peat soil.  Or, consider how millions died because of forced collectivisation in China and in Russia.

Why should we just accept that Taib is right about his ‘economic vision’, even though he is yet to make out any sort of convincing economic case?

This old man is preparing to invest all Sarawak’s resources into a project that will change the face of the state for ever and yet he seems insulted when people start requiring due diligence on his plans. 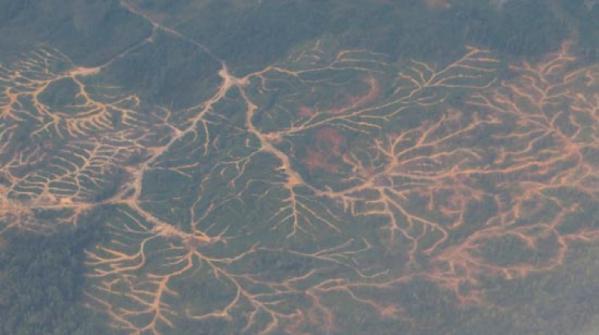 Taib’s record so far – wanton destruction of a priceless rainforest. What recommendation for his future vision?

After all, Taib told the people they would benefit from logging and oil palm, but the fact is many are even poorer than before they lost their jungle to these industries.  So, why should we be confident he has got it right this time? 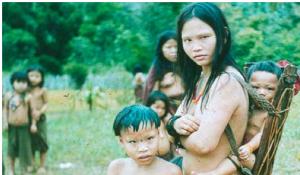 What help for these Penan people after 50 years of “progress and development” that just destroyed their jungle?

The administration has already acknowledged that it is going to have to rely on foreign workers rather than local people to take on all the envisaged jobs in the factories Taib hopes to attract with cheap electricity.

Last year Taib toured Muslim Universities in India looking for graduates among the estimated 600,000 Indians and other foreigners that he plans to bring into Sarawak to implement SCORE.

This controversially amounts to 20% of the existing population, who are being promised “future prosperity” as their consolation prize (yet again).

The person who will clearly do well from SCORE, as always, is Taib.  With their monopoly over cement, control over the construction companies that get awarded the contracts for all the roads and infrastructure, shares in the foreign industrial investment companies and of course ownership of Sarawak Cable, which is getting all the electrification jobs out of SEB, Taib and his family are striking gold each time.

So, when he talks of “economic sabotage”, maybe he is merely referring to his own family interests? 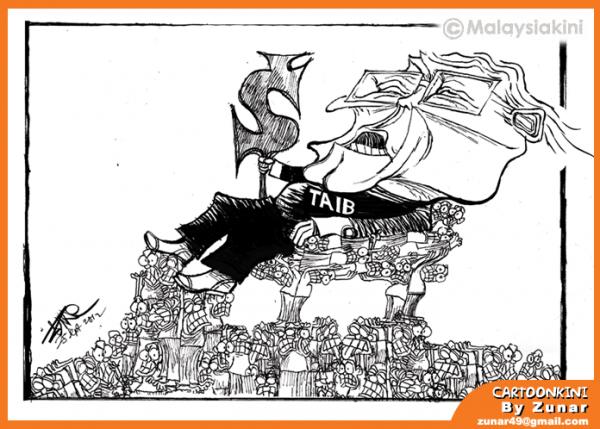 Taib’s ‘vision’ as his people’s nightmare – cartoon by Zunar