SAVE Rivers Statement: A Time Of Jubilation From The Grassroots 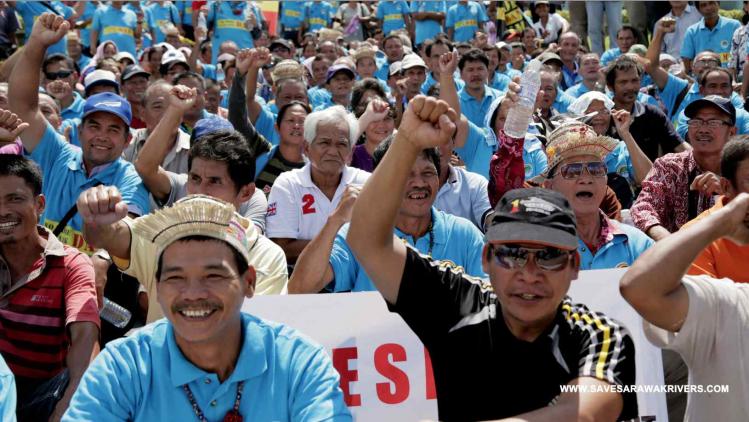 MIRI – There is an atmosphere of triumph and jubilation among villagers of Baram after the land reserved for the Baram dam and the reservoir was returned to them. But there is also sense of cautions.

Following the news that the gazettes which extinguished the rights of ownership on their land have now been withdrawn, the folks in Baram are elated. Their rights over the land were made invalid when the government allocated the area for the Baram dam. The around 40,000 hectors of land planned for the dam site and the reservoir includes cultivated land, villages, cemeteries, the villages reserved forest.

The news about the revocation of the land was in a letter from the State Attorney General office responding to Mr. Harrison Ngau the lawyer for three Baram villages who sued the government for the gazetted land.

Mr. Jok Eng from Long Keseh who is one of those manning the Baram dam blockade for more than two years, said that he was really pleased by the news. “I look forward to legally own my land again. This is the reason why I have been manning this blockade all this while. I will continue to stay at the blockade and wait for the official announcement from the government.” Some parts of the proposed actual site for the dam belong to Mr. Jok Eng and his relatives.

When asked for his comment, Mr, Nungang Anyie from Long Liam said, “ I am very happy but I hope that this is not an election gimmick and that the government is sincere. To show their sincerity, I would like to request for Sarawak Energy Bhd to withdraw their lawsuit against the 23 of us for evicting their workers from the dam site in 2013.”

Mr. Lejau Tusau, a former Ketu Kampung of Long Mekaba and one of those who have been actively involved with the resistance against the dam commented, “ I am so grateful to the Chief Minister for returning our land back to us. We hope that this is final. But if they start the construction of the Baram dam in the future we will be back to resist it.”

He added, “I would like to hear an official statement in writing or announcement from the government about Baram dam’s cancellation. After that we will remove the blockades.”

Mr. James Nyurang a former Ketua Kampung of Tanjung Tepalit, Baram said, “While we are very happy to hear this good news, if the government is really going to cancel the Baram dam, now we would like to request for the improvement of the infrastructure in Ulu Baram so that we can move on with our lives.”