BMF statement: The President of the Asian Development Bank is asked to stop a loan to Sarawak Energy 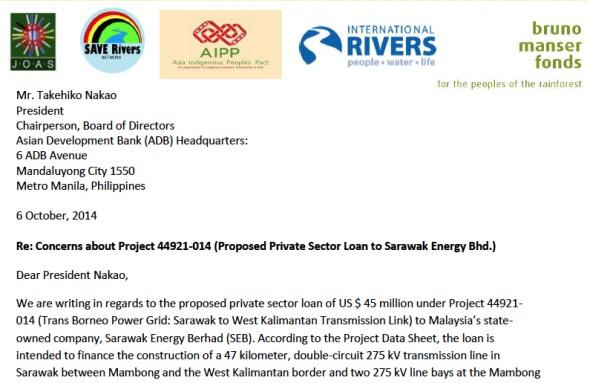 Manila, Philippines / Sarawak, Malaysia – Environmental and human rights groups from Malaysia and internationally are calling on the Asian Development Bank (ADB) to shelve a proposal to loan up to US$45 million for building the “Trans-Borneo Power Grid” (transmission lines) in Sarawak, Malaysia. This week, 40 organizations issued a letter to the President of the ADB, Mr. Takehiko Nakao, and the bank’s board of directors warning them of the reputational and financial risks associated with the loan.

The letter, dated October 6th, questions why the ADB would invest in the power supplier and dam-building company Sarawak Energy Bhd, when it has been beset by charges of corruption, exposed for irresponsible project management practices, and the subject of investigations by the Malaysian Bar Council and the Malaysian Human Rights Commission (SUHAKAM) due to complicity in violations of the constitutional rights of Indigenous Peoples.

According to Peter Kallang of the grassroots Indigenous Peoples’ network SAVE Rivers, “The ADB says the loan will facilitate a so-called ‘win-win’ situation in which West Kalimantan, on the Indonesia side of Borneo, will get cheap energy while Sarawak will get to export hydropower energy. But this does not constitute a ‘win’ for the local people of Sarawak. The rivers that are planned to be dammed by Sarawak Energy to generate this electricity are our lifeblood. Our land, rivers and cultural heritage are priceless-they are not for sale. Investing in this company to build transmission lines means becoming complicit in destruction.”

Anna Meier of the Bruno Manser Fund, an organization that has done extensive research into corruption in Sarawak, explains why the ADB risks becoming associated with corruption in Sarawak: “Our research has proven that state-owned Sarawak Energy has awarded contracts worth at least US$400 million to companies linked to the family of Sarawakâs long-time ruler Taib over the last six years. Communities affected by Sarawak Energyâs operations have also reported several attempts of bribery by company staff to the Malaysian police. Under the ADBâs âIntegrity Principles and Guidelinesâ these acts are considered as âcorruptâ and âcoerciveâ practices. The ADB has a responsibility to ensure the recipient of their loan is in compliance with their own standards in Sarawak.”

Thomas Jalong of Jaringan Orang Asal SeMalaysia (national Indigenous Peoples’ Network of Malaysia) adds, âThe electricity transmitted through the power grid may be ‘cheap’ for consumers that want to purchase it in West Kalimantan, but it comes at an enormous cost and irreparable loss on the other side of the border. It is the Indigenous Peoples – the Kayan, Kenyah, Penan, Iban, Kajang and Bidayuh – whose customary lands and livelihoods are at stake in this equation. If the ADB approves the loan, they will also become associated with the social and environmental problems related to the generations and export of hydropower from Sarawak. Already, Sarawak Energy’s recent track record of negligence in relation to construction and resettlement for the Murum Dam is evident. We hope the ADB does not opt to neglect its own social and environmental safeguards, and hastily approve a plan for cross-border power trade without looking into the reputational and long-term socio-economic risks involved.”

The letter was initiated by Jaringan Orang Asal SeMalaysia, SAVE Rivers, Bruno Manser Fund, International Rivers and the Asia Indigenous Peoples Pact. It is hoped that ADB President Nakao will give the matter due consideration and proactively intervene before the proposed loan advances further toward approval.

The letter is accessible here: stop-corruption-dams.org/resources/44921_014_Project_Letter_of_Concern_to_the_ADB.pdf