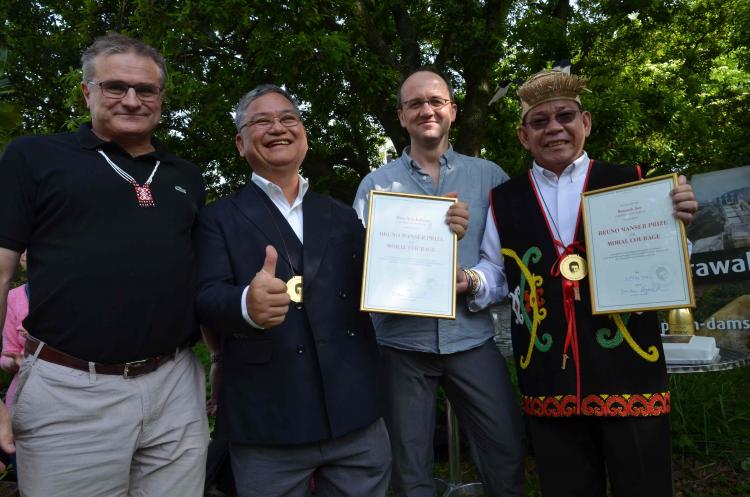 (BASEL / SWITZERLAND) Komeok Joe and Peter Kallang, two indigenous activists from Sarawak, Malaysia, have been honoured with the Bruno Manser Prize for Moral Courage. The Prize is named after rainforest hero Bruno Manser and honours personalities who have proven moral courage in defending the environment and human rights.

Komeok Joe and Peter Kallang are the first receivers of the new award and have been chosen for their outstanding commitment in defending indigenous rights in Sarawak:

Komeok Joe, member of Malaysia’s indigenous peoples network Joas, has been honoured for his enduring struggle for the rights of Sarawak’s indigenous peoples, especially the Penan. Since the late 1980s, he has tirelessly been working to protect Sarawak’s remaining primary forests and for the acknowledgement of the land rights of the Penan. Thanks to the commitment of Komeok Joe and the Penan Selungo communities, significant areas of primary rainforest have been preserved until today.

Peter Kallang, chairman of the grassroots network SAVE Rivers, has been honoured for his courage in defending indigenous livelihoods against the threat of dams. He and his fellow activists have reached the unbelievable, they managed to convince the Sarawak government to cancel the Baram Dam, which would have led to the resettlement of up to 20’000 indigenous people.

Kaspar Müller, representative of the Bruno Manser estate, praised the two activists in his laudation: “You receive this award in the name of all of us and we all do it with our deepest and profoundest respect for your long engagement in favour of the rights of indigenous people and for the protection of the rainforest. Congratulations and thank you for all what you have done and what you have achieved. Bruno Manser, who disappeared on the 25th May 2000, 16 years ago, would be very proud of you.”

Swiss activist Bruno Manser lived with the Penan in Borneo’s rainforest from 1984 to 1990. With his moral courage in defending the Penan’s rights against logging activities, he became an iconic figure of the international movement for forest protection. Bruno Manser disappeared in the year 2000 in Sarawak’s rainforest. Until today, his fate remains a mystery.