Silence From The MOF As The MACC Investigates Itself?

More significant than what has so far been said about Malaysia’s Spy Lady, Hasanah Abdul Hamid, who was sprung last week from shocking charges of theft of public money by an equally shocking DNAA decision, is the astonishing secrecy with which matters have been handled.

In short, the Ministry of Finance have shown a level of disinterest in the theft of its own money that is reminiscent of the days when Najib was in charge (could this be because Najib is reportedly back in charge?).  As a result, no police report has been made and the MACC has been left to investigate its own alleged involvement in that theft.

There has been confusion surrounding the present incarceration of three MACC officers who were remanded on September 14th for 6 days by a magistrates court over the astonishing allegation they had substituted US$6 million that had been held under their custody since 2018 with counterfeit notes. The three are reputed to be senior and close advisors to the very head of the anti-corruption body, Azam Baki.

Sarawak Report is reliably informed that the only police report filed so far in the case was back in 2018 when Hasanah, the ex-director-general of the Malaysian External Intelligence Organisation (MEIO), reported that the cash, which was confiscated $100 notes after being found hidden in her house, was not hers to take.

She was later charged with filching a total of $12.1m brought into the country through KL airport in April-May of 2018. The reporting indicated the money was derived from the thefts from 1MDB and meant to be used influence the election, which Hasanah had already realised her boss was going to lose. She spent a chunk of it on a batch of hugely expensive watches and secreted the rest.

Back last October when the case came to trial the court was informed by prosecutors that Hasanah “had received contributions amounting to US$12.1 million” from an external party and “misappropriated the funds by instructing her officers to make six luxury watches purchases, made payments to third parties and transported the remaining monies out without handing them over to the division nor the government.”  However, Hasanah had already placed her report saying the money was not hers too confiscate.

Following the disgraceful DNAA this month Sarawak Report has learned it was decided the money should indeed be returned to where it belonged, namely the Ministry of Finance which is the owner of 1MDB. It was following that request that thunder struck.

According to inside informants the cash had, as per protocol, been checked note by note when it was confiscated by the MACC using a currency checking machine to authenticate the notes and register each serial number. There was not question but that the horde was genuine cash in US dollars back then in 2018.

Yet what was passed back to the MOF by the same anti-corruption body turned out to be forged notes.

It is at this point that the MOF would have been expected to call the police and make a report. Today DAP’s Gobind Sing has made that very point and asked why so far there has no police involvement or investigation into this shocking development?

Sources have told Sarawak Report that the men at the ministry have kept silent and allowed the MACC head Azam Baki to keep this investigation into his close subordinates within his very own organisation.

The MACC case number FA-89RE-135-09/2021 was duly filed this month and three senior figures remanded. However, the widespread concern throughout the MACC and beyond is that there is a strong determination to bury this matter and allow the missing $6 million to simply add to the many other missing billions that have been stolen by Malaysia’s senior officials from the public they are entrusted to serve.

After all, if the senior leading figures of the state include those charged and convicted of stealing billions of dollars and these very same fellows are now being seen by the entire world not only to be escaping imprisonment but being elevated once more by PN 2.0 to positions of honour, authority and trust, those on the lower rungs will expect to see their cut.

Malaysians threw out a criminal organisation in 2018 that had been posing for many years as the premier political party in the land. The UMNO prediction that it could soon utilise its mafia network to restore itself to office is for now fulfilled. However, their foot soldiers follow by example and having seen the top guys help themselves can only have concluded they too should exploit their opportunity to steal also.

So far, it would appear those in charge at the Ministry of Finance and the PN 2.0 government have not dared to counter that attitude. After all, its not just dollars but many many other secrets that the MACC have been looking after and everyone also knows what a close confidant Malaysia’s Spy Lady has continued to be of her old boss Najib Razak, who now claims to have been re-appointed to a ‘role in government’ namely to advise the Ministry of Finance. 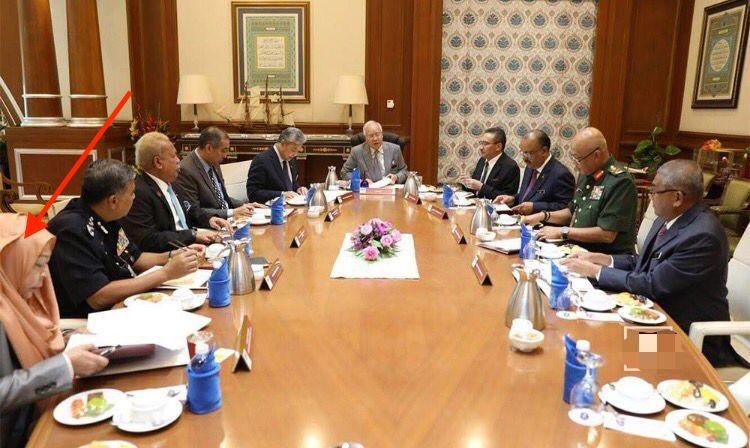 Return to old times? The Ex-spy chief is reported to have been a frequent visitor to Najib’s home in recent moths, earning her a slot at the top of the get out of jail list?