If Samling Can Be Pushed Back In Selangor Why Not Sarawak?

Once the people of Selangor realised that the ghoulish timber raiders of Sarawak, specifically the Yaw family company Samling, had been granted access to destroy their remaining jungle in Kuala Langat there was an uproar.

Within days the leader of the opposition, Anwar Ibrahim, had intervened to persuade the PKR state government to step back from the deal. Even the Selangor crown prince, originally a director of the company behind the plan, announced he too wanted to defend the natural forest and to prevent the project.

However, over in Sarawak where this global destructive force is based, the GPS state government is remaining tight lipped as yet another outrage involving this company has started to unfold in the newly minted Baram Peace Park. Here, Penan tribal protestors are at this very moment desperately setting up blockades against Samling’s invading Caterpillar trucks pushing into the primary forest buffer zone around the park.

As for the Governor, he sits silent in his mansion… doubtless bearing in his mind that two of his other mansions in the United States were donated to him by Samling.

The state is still reeling from the latest log jam disaster caused by yet more careless and destructive logging of the Baleh Dam area. The authorities will not admit which companies were granted the rights to destroy this region and they will not admit that the log-jam, (which now threatens the safety of boatmen on the Bakun Lake after huge tracts of river were destroyed) was caused by the self-same logging.

So, what hope can the native Penan protestors have of receiving support from their corrupted state government against the Samling bulldozers?  The tribe has vainly sought to prevent the destruction of their homelands for decades and just last month Samling issued legal action against another group trying to protect their forest, claiming their protests have ‘defamed’ the company!

It was only last November that the landmark agreement was inked to establish the Baram Peace Park after years of campaigning by the native people and NGOs. It secured protected status for a core area of the Upper Baram through an agreement with the International Tropical Timber Organisation in conjunction with the Malaysian government.

Malaysia is funding US$1.2mil (RM4.98mil) of the project’s budget, while the remaining US$800,000 (RM3.32mil) will be funded internationally. Half of the international contribution has already been raised thanks to campaigning by the Swiss based NGO, the Bruno Manser Fund (BMF). BMF has told Sarawak Report that the latest blockade is an attempt by the Penan to prevent Samling’s logging vehicles from entering the buffer region that protects the park:

The Timber concessions for the designated core zones/protected areas of the Baram Peace Park should naturally have been withdrawn from Samling. Although the current logging is not taking place in the designated protected areas (core zone), it is also in primary forest areas (in the buffer zone). [BMF – update on the situation]

So far the Penan protestors have been met with stunning silence having thrown up their blockade to keep Samling’s bulldozers out at the start of this week. For the state government to encourage the further destruction of primary jungle in such a sensitive zone is plainly an outrageous abuse of an agreement which has cost Malaysian taxpayers as well well-wishers across the world millions in donated dollars and ringgit.

All to make one of the world’s richest timber companies and their local political cronies richer still.

The Penan and indeed all the desperate native peoples of Sarawak can only reflect that if their elected state government was presently run by PKR then they might have been able to hope that action would be taken as it has been in Selangor.

However, the GPS government, the Taib family and the powers that be in Sarawak are, as everyone knows, firmly in the pocket of the timber raiders. It is time the rest of Malaysia to at last join hands to support these desperate peoples of the forest, who are seeking to protect the survival of a precious eco-system that Samling plans to convert to cash.

The ITTO should also step up to the plate and do its duty as a global regulator – one that has been PAID to protect this area. The people of Malaysia can not allow this outrage to pass unnoticed simply because this is Sarawak and not Selangor. 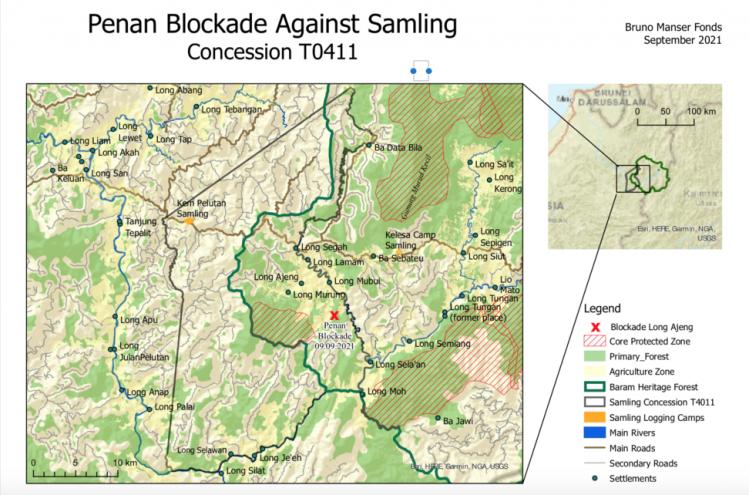