No Majority? We Have Ways To Solve Such Matters

There is a pressing emergency in Malaysia, some very important people are worried about their jobs, perks, positions. Yet, a solution is at hand so the nation can breath a sigh of relief.

It was simple, explained Mr Moo on TV today with Mr Orange, Mr Red, Mr Green and Mr Purple lined up behind him. We just explained to the Kingpin that he is not to believe the evidence of his ears and eyes but what I say.

I HAVE a majority, just give me a little time for a bit of ‘democratic persuasion’ to prove it. One month should do. We can delay it come September if it doesn’t!

This was the moment for a self-proclaimed expert in the art of political persuasion to give a flavour of what he plans in a dark alley some place. These guys who went public yesterday, he explained, they don’t oppose me (I rely on their numbers) they just want me to get them out of jail.

So, will he do the deal now he has no choice or step down?

Meanwhile, the Agong has said not a word. Does Mr Moo reckon he has something on him too?!!

Frankly, unless the Agong is prepared to send in his royal army or the royal police it probably doesn’t matter what he says or not. These Moo guys are up against the wall and kicking in the crotch.

Try making polite references to the Constitution, the rule of law, convention or plain respectability and you are likely to get Zuraida at your door.

Which means that as thousands are crowding daily into hospitals and dying in the streets, threatened by ’emergency crack down’ ordinances and fines, the country is being ‘lead’ by a dying leadership headed by a sick delusional man who has lost the confidence of parliament and all moral authority to make decisions or enforce rules.

This is a government with one priority and it isn’t Covid. Their priority is to save their own political skins not lives. After nearly two years of practicing the worst forms of skullduggery they have no desire to be on the other side of an arrest warrant like the various predecessors they have sought to manipulate into propping up their ‘majority’ for months and months.

Of COURSE these vital supporters have sought to trade their votes in return for pardons. So, what is Mr Moo’s excuse for betraying his allies and entering into a coalition with these folks? Upholding Malay values apparently. Consider that an insult to Malays.

What Moo and his line up of Mr Reds, Greens, Orange, Purple and the like all want and wanted was a turn at the trough whipped from under their noses by GE14. They are presently commanding that position with their weapons turned outwards. 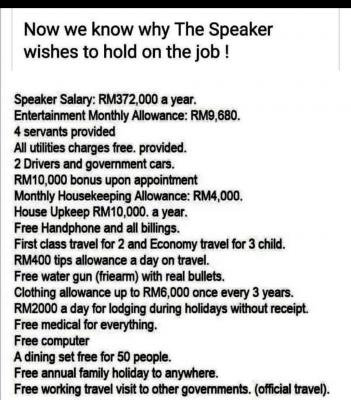 This is recognised across Malaysia, where the entire country now lies in dread of an inevitable new pestilence on top of the pandemic in the form of  a plague of frogs jumping into limos, top jobs, fancy packages and a rules-exempt Covid experience.

Guess who Mr Moo will get to pay for the party.

This is not an acceptable situation for Malaysia. Particularly were the cunning, oft-played plan to work. The country would then be saddled with a bunch of criminal decision-makers continuing to profit from vast vaccination budgets that have resulted in foreign nations having to step in with charitable donations of actual doses despite the money spent.

The King holds a restricted but vital role in Malaysia’s Constitution, which is to step in at junctures such as this. He appointed Mr Moo and now he must terminate Mr Moo, because despite what Mr Moo says the country has seen with its eyes and ears that he has no majority right now if he ever did.

A month without a functioning government in the middle of a global health crisis is deadly and unacceptable. Mr Moo must be replaced and his goons dispersed. What comes next is not the business of Mr Moo and will be decided in his absence by others invited to try where he has failed.

That is the way the system works and the reason is to prevent crooks, failures, fantasists and the like from hanging on to office when they can’t perform the job.  For even a day let alone a month.