The lying twists and turns of the last 48 hours have left the country gasping to see how low a bunch of near do wells will stoop to cling to office. However, today’s latest moves leave an illegitimate Prime Minister who cannot command a parliamentary majority utterly exposed and the clear duty now of the Head of State is to boot him out.

Mahiaddin is for the umpteenth time refusing to face a vote in the House of Parliament for the simple reason he will lose it. He is therefore seeking to set himself up as an illegitimate dictator ruling without Parliament under the provisions of a bogus emergency that the Head of State has made clear he will no longer tolerate.

The final showdown came this afternoon, when the PM personally cancelled Monday’s sitting of Parliament until future notice, in direct defiance of a royal order, follows a week of brinkmanship, during which it became increasingly clear to the troubled population that the head of state and defender of the constitution has fallen into direct conflict with a prime minister he appointed but who refuses to conduct himself according to the law.

Today’s ultimate act of defiance by Mahiaddin, has brought the matter to a head after he had originally ‘suspended’ sittings on Thursday in response to a statement being published by the King pointing out government ministers were lying.

Overnight it had emerged that the King had agreed to assent to PN’s request for a temporary suspension of the Sarawak State election owing to Covid, but ONLY if Parliament were effectively to be restored so the matter could be voted on by MPs according to the Constitution (see the citation below). 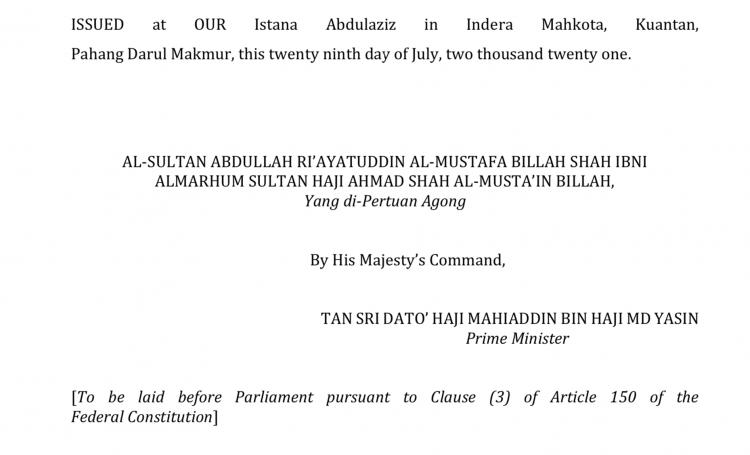 The King agreed to the proclamation  of a  Sarawak State Emergency only on condition it be voted on in the sitting Parliament.

It was in response to this challenge that Mahiaddin has cancelled Parliament anyway, citing the alleged advice of his Health Director (who has presided over Covid chaos in recent months) above the demand of the King that he should consult his vaccinated MPs.

Notably, the prime minister’s claim is only that his decision was “made in line” with “recommendations” of the Director General of Health. Not that the DG specifically advised Parliament must be closed on health grounds, which would be deeply unlikely and plainly ridiculous:

The direct clash on such a plainly bogus excuse now leaves the King with a stark choice, because in practical terms Muhyiddin can no longer govern. Take this Sarawak state of Emergency that can no longer be voted on; the King has made it clear it will therefore not receive assent and therefore Sarawak is left in limbo without any legitimate leadership – as the present government is now expired under the Constitution and with no assent to call the election or even to postpone it!

With such a crisis facing the people his Majesty either gives in to an act of sedition by a man who has seized power by an illegitimate process and seeks to rule without listening either to himself or Parliament or he must exercise his duty as the Head of State and of the armed forces to counter treasonous power-grabbing and illegal defiance of the Constitution by this PN leader.

By slamming shut Parliament yet again Mahiaddin has now pitched himself against the palace, parliament and worse the people, many of whom have bravely gathered in defiance of the PM’s ’emergency’ rules today to demand that this government must go.

The King must call him in and sack him and he must demand the recalling of Parliament – or be remembered as the monarch who allowed democracy to be overthrown by a bunch of blatant crooks and the rulers of the nation to be demeaned and sidelined for ever more.

History Of A Constitutional Crisis

At the start of this week of unfolding constitutional crisis many wondered if the developing game of brinkmanship represented a genuine conflict between the new King and his new PM.

However, the growing tension became clearer every hour that passed as the palace put public pressure on the backdoor prime minister to test his support in a Parliament that has barely sat since he seized office.

Up till this week the Agong had acted as Mahiaddin’s most crucial champion enabling this second-rater to emerge as prime minister after he himself triggered the collapse of the PH government by defecting. So, what had changed the picture or was it all a sham?

After all, following a distinctly controversial process after Mahathir stepped down the King had rather than calling Parliament to determine the next leader (as requested by Mahathir as interim prime minister in accordance with the Constitution) had called MPs to the palace to hear their preferences.

The MPs voted 92 for Anwar, 65 for Dr Mahathir and the rest abstained according to figures never disputed by the palace. Yet, in the event the King appointed Mahiaddin who had received no votes at all, given he led no party.

It is understood that Mahiaddin deceived the King that he had support despite the apparent numbers – numbers that ought to have been tested in the proper place, which is Parliament. What is clear is that Mahiaddin is certainly a liar and has continued to lie even to the King this very week.

Following the novel process of this appointment of a backdoor prime minister, the palace then proceeded to allow Mahiaddin to postpone his reckoning with MPs for several months, until he had bought over enough shaky support (through methods that have scandalised the nation) to risk a sitting. The excuse used was the Covid pandemic, which was plainly bogus.

When at last a budget had to be forced through but Mahiaddin still had not the numbers the King flirted with a State of Emergency. However, pushed by his fellow rulers, fell back on allowing parliament to sit at last whilst strongly requiring that representatives support the budget to tackle the pandemic. With grave misgivings a very slender majority of MPs complied with the request of the Agong and soon after Parliament was clanged shut again.

Meanwhile, anger and concern was increasing within the country and amongst MPs over the blatant mismanagement and corruption on the part of the backdoor government and a prime minister plainly far more concerned about his own survival and the enrichment of his supporters than in the survival of fellow countrymen and the proper funding of a vaccination roll out.

With the opening parliamentary session of 2021 looming it was the King who again came to the rescue of the now hugely unpopular prime minister who feared to test his following among MPs. Cancelling a conference of his fellow rulers to decide upon the matter, the King acceded to the prime minister’s second request to stage a State of Emergency, which included an ordinance to suspend Parliament once more for six months.

This contradicted the Constitution once more, since the Constitution requires that any declaration of a state of emergency must be put before a vote and revoked if it fails to obtain a majority. However, the King used his powers and more importantly his moral authority to enact the emergency and protect the prime minister he had appointed once more.

The excuse for the emergency was Covid, but since other countries have run their parliaments in the pandemic the explanation given by the prime minister was as telling as any other moment in this crisis. Mahiaddin admitted that if Parliament was called this would force and election which would be unacceptable during a Pandemic.

The reason it would force an election was he would lose a No Confidence Vote if held. However, the excuse was specious and self-serving in that the alternative need not have been an election, simply to replace him and his hated lieutenants.

With the support of the King Mahiaddin govern with emergency powers in the name of the pandemic for a further six months, during which he confirmed his greedy government’s utter unsuitability to manage the public health crisis. Despite draconian rules and crackdowns (which he and his fellow opportunists themselves repeatedly broke) the virus has rampaged out of control.

A corrupt and incompetent vaccine roll out has left vulnerable people unvaccinated far too long. The economy is on its needs and people starving. Mahiaddin and his fellow leaders showed arrogance and lack of empathy (as they partied) in denying the people’s difficulties and claiming all was well.

So, when the constitutionally required sitting of Parliament at the end of the six month emergency period presented the next test for the now hated occupants of Putrajaya a different sentiment prevailed. It seemed to have affected the King, who till now had provided the key vital support that ‘legitimised’ his backdoor choice.

PN, of course, wanted to again postpone Parliament (in fact why bother with democracy at all in the view of his new PAS supporters who think they rule through the word of God?). However, this time the King called his fellow Rulers and the Council agreed that the Parliament must be called in order to conduct the long postponed debate and vote on the Emergency, and indeed to finally test the by now more than doubtful majority held by a Prime Minister who has avoided Parliament as if it WAS the Coronavirus.

A Bluff Or A Battle Between Old Allies?

The King and the Rulers DEMANDED the reluctant PM allow Parliament to sit following the six months gap, as stated in the Constitution that they must.

The chastised PM was forced to bend and provided for five days only (then a sixth) to discuss the crisis. However, the ducking and diving followed immediately with announcements by Mahiaddin’s toady appointments (the brothers Speaker and AG and PAS ‘law minister’ Takiyuddin) that this would be a briefing session without debates or votes allowed.

At first the weary population and MPs suspected the King would tolerate the nonsense, as up till now he has, supporting his controversial choice time and again. However, spiking Covid and popular fury appear to have changed the game even for the Palace. What King would want to be held responsible for a murderous dictatorship of criminal looters and why should his fellow rulers thank him as they wait their turn of office?

By the start of this week Mahiaddin no longer failed to hold the confidence of the House he showed every sign of having lost the confidence of his patron too – the King. In this respect the Constitution of Malaysia is clear: The Prime Minister must enjoy the confidence of the elected House throughout his term of office. If he loses it he must resign and the King must call the person who can command that confidence with the majority of MPs.

See the English translation of Mahiaddin’s personal act of defiance in closing Parliament on his order alone below:

Honorable Members of the House of Representatives

. thank you “PRIHATIN RAKYAT: EMERGENCY TO FIGHT COVID-19″ VISION OF PROSPERITY TOGETHER 2030 “SERVE FOR THE NATION” I, the trustee,