'Let Parliament Vote On The SOE, That's An Order'! What The King Has Told Moo - EXCLUSIVE!

According to a leaked letter apparently sent from the Istana Negara yesterday to Malaysia’s embattled prime minister the Agong has responded with a furious challenge to his Prime Minister, following Mahiaddin’s defiant statement yesterday afternoon insisting the King must follow the Cabinet advice and accept its decision to revoke the State of Emergency without a vote in Parliament.

The emergence of the private letter from the King to his Prime Minister just hours after it was sent represents a dramatic further escalation of the Constitutional Crisis in Malaysia and has pitched the King now squarely behind the rights of Parliament to decide on the future of the PN government.

Mahiaddin had been responding to a public statement made earlier in the day by the King, in which the monarch revealed his ‘sadness’ that Law Minister Takiyuddin Hassan had “misled Parliament” on 26th July with his surprise announcement that the State of Emergency had been revoked the previous week (backdated to 21st  July).

The King pointed out that he had not signed off on this decision and that had to the contrary told Takiyuddin and Muhyiddin that he expected the matter to be tabled, debated and voted on by MPs.

The PN government responded to the publishing of that statement by immediately suspending Parliament half way through its sitting (on the usual excuse of Covid) and ministers had then retired to Mahiaddin’s own house before issuing their public rebuttal telling the King he must comply with their Cabinet decision.

This later letter, which has every sign of being a genuine document, although this has not been officially confirmed, appears to have been sent as a private warning from the King that he would not simply bow to these demands and considers he has substantial remaining powers to disrupt PN’s strategy to block a vote by MPs.

In no uncertain terms, over four pages of tightly argued criticism of his Prime Minister, the King explained why he would not accept the Cabinet advice to revoke the State of Emergency without a vote being passed. He states that it was his constitutional right to give or withhold his consent to a State of Emergency (and its revocation), pending a vote by Parliament which the Constitution clearly states would over-ride such proclamations.

Given his role he complains about being bounced into the alleged revocation by ministers, which had been contrary to his expressed wish that the matter should be debated and voted on by MPs – being the due process clearly outlined in the Constitution. The move has undermined his role and authority in the matter he says.

The King further points out that it is a lie to claim the revocation has legally taken place, because he himself has yet to sign his Royal Assent to the proclamation and it therefore remains un-gazetted and cannot be implemented.

It is at this point in the letter that the King unveils his own Constitutional weapon as a threatened ultimatum against the wilful PM, who has done everything to avoid subjecting his actions to a vote by MPs.

Unless the Prime Minister accedes to his request by holding a debate and a vote on the matter during the present session of Parliament (ie this coming Monday), the King states that he will continue to withhold his Royal Assent to the proclamation Mahiaddin has attempted to force upon his through his Cabinet.

That could pose serious trouble for Mahiaddin and his government, not only because it has set him up in direct and open conflict with the King, but because it would mean that the Emergency Ordinance will remain un-repealed even if due to lapse. What other ordinances might the King refuse to sign if the illegitimate government refuses to test its legitimacy in Parliament?

The full letter and translation is published by Sarawak Report below, given that no other media in Malaysia has chosen to do so despite compelling evidence that this is a genuine document leaked in the public interest.

The reason we suggest is fear and intimidation, given that owing to its lack of legitimacy, the present coup coalition has resorted to threats, arrests and prosecutions against critics, particularly from the media accused of ‘fake news’.

However, since royal officials have repeated refused to confirm or deny the authenticity of this letter, written very much in the same vein of the public rebuke the Agong released earlier, Sarawak Report considers the response to be a tacit acceptance the document is genuine and that the media have effectively resorted to self-censorship out of fear of abusive reprisals by the PN government.

After all, if the letter was not genuine there would be no reason for the palace to refuse to deny it. Indeed it would be mischief to keep silent over a fake document given the present public confusion and political turmoil of the moment. Therefore, the absence of a denial in the face of multiple requests from news organisations on this issue represents an effective acknowledgement the document is genuine and the public should know about it.

Failure to publish would be a disservice to Malaysians and indeed the Agong by neglecting to report this major development in the country’s political power struggle.

Crucially the Head of State has just thrown down the gauntlet to this Prime Minister whom he plainly bitterly regrets having appointed and whom he effectively accuses of undermining himself as King and misleading Parliament and the people.

“Any revocation of the emergency ordinances that is done in haste and not tabled in Parliament will lead to a negative impact on myself.
The repeal of these Emergency Ordinances has been done by disregarding the functions and powers of His Majesty as the Head of State as contained in the Federal Constitution”

The King complains who ends with this direct challenge and direct order:

“The repeal of the Emergency Ordinance is a constitutional power of His Majesty and does not rest on the authority of the Cabinet alone. Based on the above descriptions and the ongoing sitting of Parliament, I order that the proposal to repeal these Emergency Ordinances be tabled and debated in Parliament before being signed by Me.”

The full letter is below for the benefit of the people of Malaysia so that they understand the truth of the situation facing their country as opposed to what the Prime Minister and his followers are saying: 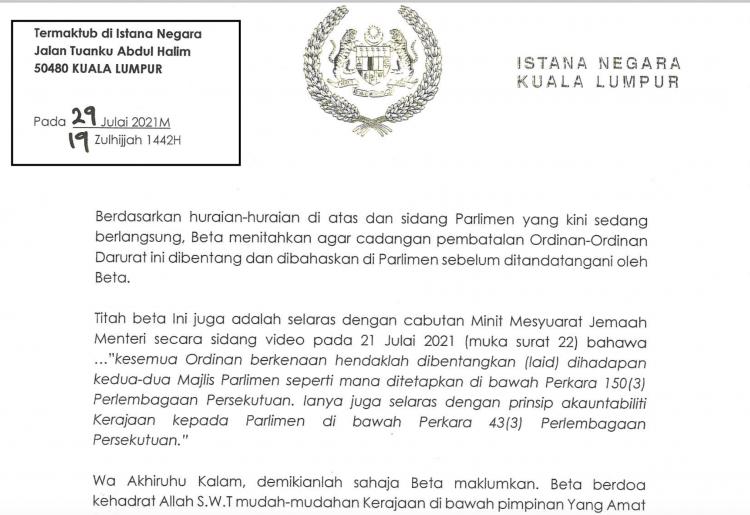 “I bring to the attention of YB Tan Sri the statement made in the Dewan Rakyat on 26 July 2021 by the Member of Parliament for Kota Bharu, Yang Berhormat Datuk Seri Takiyuddin bin Hassan who is also a Minister in the Prime Minister’s Department (Parliament and Law) and further to the session The Virtual Meeting on 27 July 2021 at 12.00 noon with the Right Honorable Tan Sri and the Honorable Tan Sri Attorney General in relation to the statement that the government has repealed all Emergency Ordinances in force during the Emergency Proclamation period.

I would like to inform you of the chronology of the application for the repeal of the Emergency Ordinances:

On 23 July 2021, a Letter from the Right Honorable Tan Sri with reference MKN.12 (RB) 600-1/2/1 (32) dated 23 July 2021 on the Repeal of the Emergency Ordinances promulgated under the Proclamation of Emergency was received at Istana Negara , Kuala Lumpur.

The next day, on 24 July 2021, I received the letter at Istana Abdulaziz, Kuantan, Pahang.

After examining the contents of the letter, on the same day, 24 July 2021 around 4.30 pm, I ordered the Honorable Datuk Seri Takiyuddin bin Hassan and the Blessed Tan Sri Attorney General to appear before me virtually. This matter is being implemented in accordance with Article 40 (1) of the Federal Constitution.

During the virtual face -to -face session, I ordered:

Nevertheless, I am deeply saddened that what I consented and ordered the Honorable Datuk Seri Takiyuddin bin Hassan as Minister in the Prime Minister’s Department (Parliament and Law) and the Blessed Tan Sri Attorney General during a virtual session on 24 July 2021 that the proposed repeal of the Ordinance Ordinance be tabled and debated in Parliament, was not complied with

Drawing the attention of the Most Honorable Gentlemen, I am aware of the need for me to act in accordance with the advice of the Cabinet as contained in Article 40 (1) of the Federal Constitution.

However, the final decision on the repeal of the Emergency Ordinances in My opinion should take into account the following current situations:

Wa Akhiruhu Kalam, that is how I inform you. I pray to Allah S.W.T may the Government under the leadership of the Most Honorable Tan Sri and all my people be healthy, prosperous and always under His protection.

Inscribed in the Istana Negara

[Note the above is a translation – the original is below] 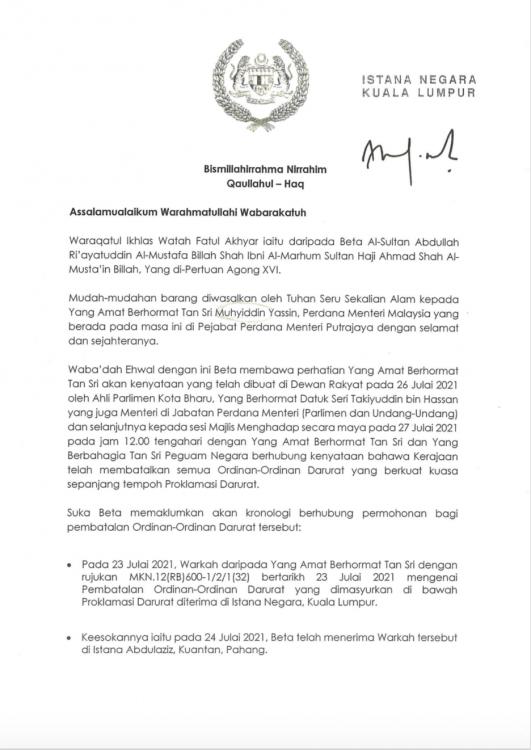 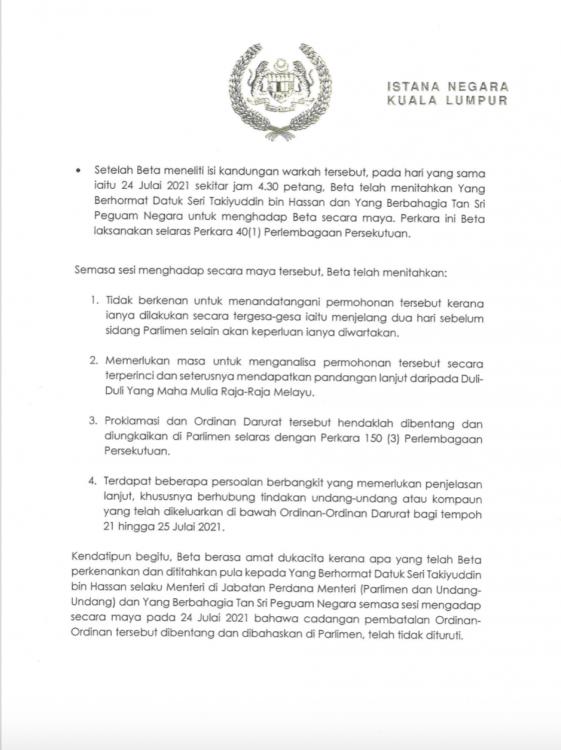 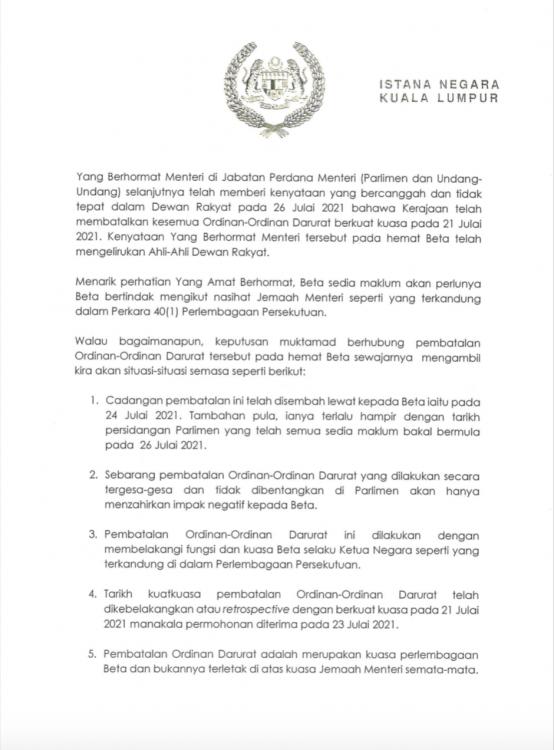 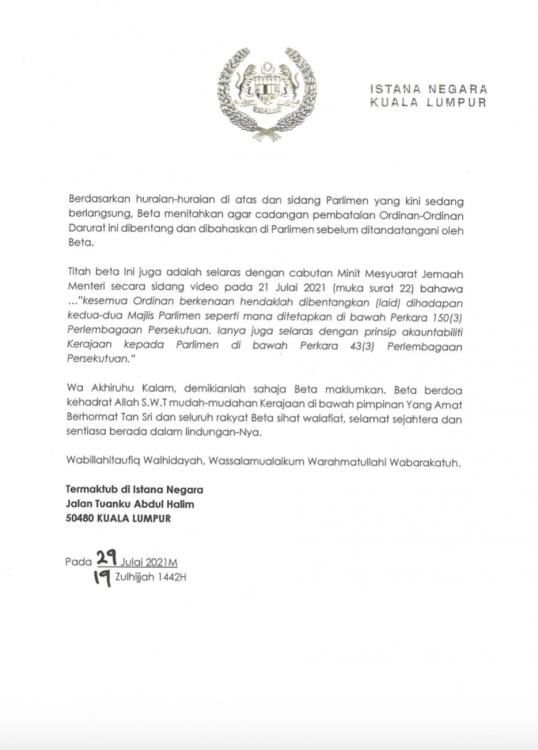