Faced with accusations of incorrect reporting Sarawak Report has requested clarification from the current MEDAC minister Wan Junaidi’s political secretary, Syed Hamzah Bin Wan Paie, over assets he claimed to have sold in 2015, no longer holding any interest.

Syed Hamzah issued a police complaint about our article which cited a report to the MACC alleging that a company, Azzahra Product Limited, previously owned by the political appointee and then members of his family, had in 2017 obtained a MEDAC (Ministry for Entrepreneur Development And Co-operatives) grant for RM338,950 in order to buy juice making equipment supplied by another company owned by his own brother and sister.

The complainant had pointed out this breached rules against related party transactions.

As Sarawak Report made clear in the article, at the time that the grant was issued Syed Hamzah was not yet attached to the Ministry which was then headed by a political colleague, Naroden Majais, also from Sarawak’s PBB party. Arising from this an other complaints we questioned the lack of transparency in the issuing of MEDAC grants, especially to such politically connected concerns.

Syed Hamzah was therefore wrong to claim we had suggested he abused his later position within MEDEC to obtain the grant. He threatened Sarawak Report to remove the post and demanded we also pay him an extraordinary RM10 million ‘compensation’ within 24 hours of his rebuttal. However we did not comply, not least on the grounds that his complaint was unfounded.

The political secretary then went on to make a further statement to the media that was widely reported. In this statement he reportedly claimed that he had not only resigned as a director of the company in November 2015 (The application for the grant was submitted in April 2017) which is true, but that he had sold all his shares at that time as well.

“According to Syed Hamzah, the reports published in the two portals on May 3 were baseless, as they alleged that he had interests in Azzahra Product although he had resigned and sold his shares in 2015.”[Malay Mail 6th May/The Edge 10th May]

“I have resigned as a director of the company and disposed of my shares in Azzahra Product Sdn Bhd on 23 November 2015. This means I have not owned any shares and interest in the company since 2015 until now” [Sarawak Update 6th May]

However, according to official records that statement was false. The published information, as submitted to the Registrar of Companies (ROC), records that Syed Hamzah did not sell his shares at the time he resigned as director of the company in 2015.

To the contrary he and his wife officially continued to own the company, which is worth half a million ringgit in share capital, until the day after the company supplied papers for the BEEP grant application on November 12th 2017. 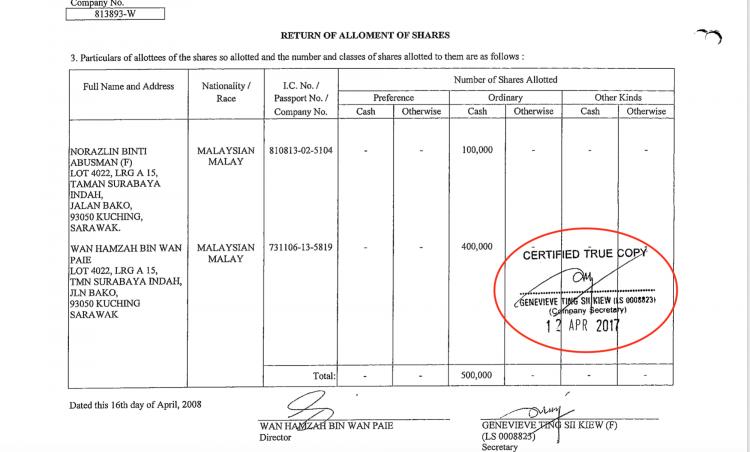 From the grant application papers that were submitted to the MACC

The documents submitted to the MEDAC subsidiary SME Corp as part of the grant application included stamped and signed forms that listed Syed Hamzah Bin Wan Paie as the owner of 400 shares and his wife (right) as the sole director of the company and minority shareholder. Syed Hamzah’s signature appears as on that form.

The day after those documents were stamped and signed however, Syed Hamzah again altered his position. According to these records he transferred 145 shares to his wife either before or on April 13th 2017 and on that day passed the remaining 255 shares to a lady in Selangor who joined as a new director. With his wife continuing as a 49% shareholder and co-director Syed Hamzah retained a related party interest in the company. 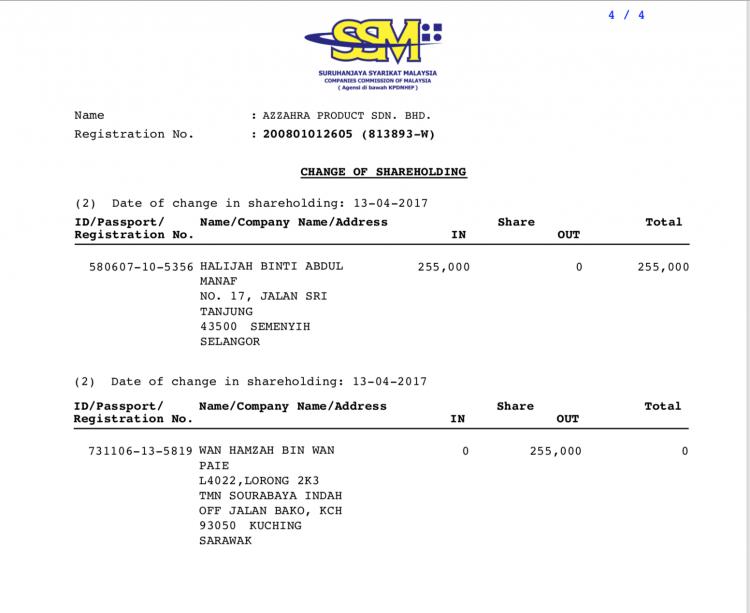 The complaint remains that Azzahra Products Limited then purchased the MEDAC grant-funded machinery through a related party supplier, namely a company belonging to a brother in law and sister in law of one of the Directors (Syed Hamzah’s wife) who was also a shareholder.

Sarawak Report has now asked for Syed Hamzah to provide evidence to back up his alleged claim, as reported by the media, that he sold the shares (valued at RM1,000 each) when he disposed of them to his wife and the new director. This is all the more relevant because subsequent developments would seem to indicate that this company has now reverted back into the hands of members of Syed Hamzah’s own family.

In June last year, shortly after Wan Junaidi brought Syed Hamzah (who is his nephew) with him as his political secretary into MEDAC as part of the PN government, records show that all the shares were again transferred to another new owner, one Syed Iqmal Ludina Bin Wan Azman. 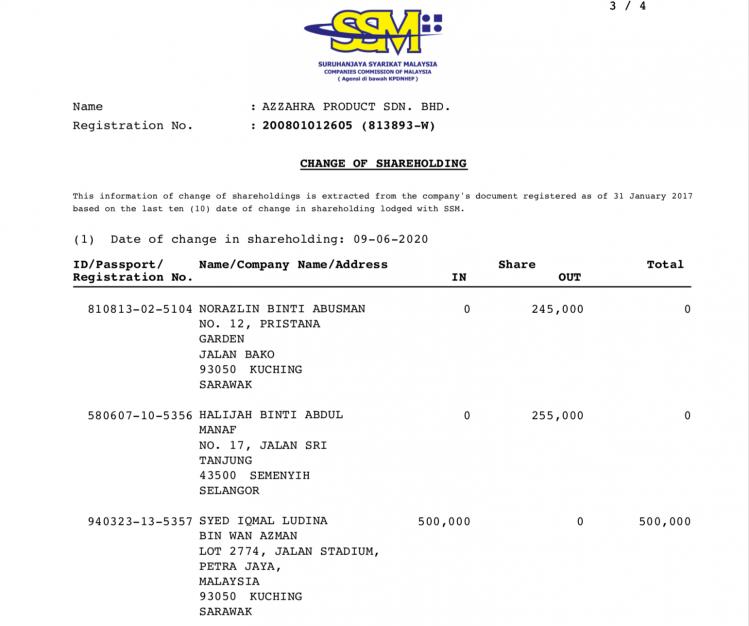 As the name suggests this new sole owner and director is none other than Syed Hamzah’s own 26 year old nephew and the son of his brother Wan Azman, owner of the company which was reported to the MACC for supplying equipment to Azzahra Product as a related party. 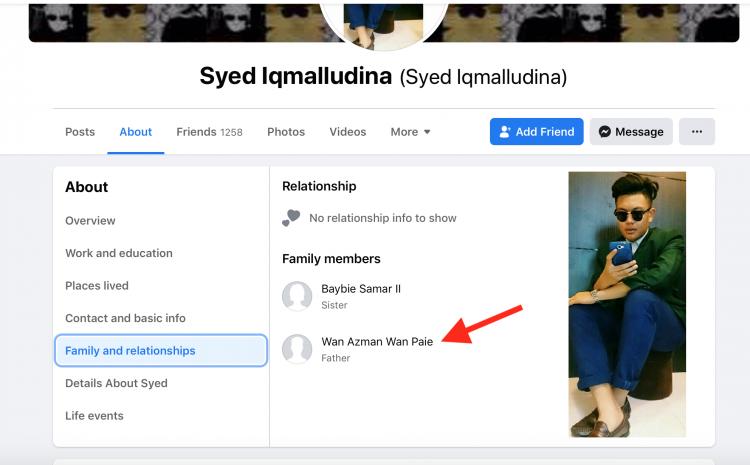 A firm sold within the family?

Only with this change did Syed Hamzah’s wife herself cease to be a director of Azzahra Product with the nephew taking over as sole director. The lady in Selangor also ceded her half share and directorship at the same time.

We have therefore asked Syed Hamzah if he would care to amend his reported statements that he sold all his shares and ceased to have any interest in the company in 2015? We have also asked him to explain by what means the company passed into the hands of his young nephew and whether the then 26 year old paid the market rate for the company, which currently declares over one and a half million ringgit in share capital and assets?

Finally, we ask whether it is a mere coincidence that Syed Hamzah’s two sisters themselves served as directors of Azzahra Product itself for several years (under its old name Alaf Beef Industries Sdn Bhd)?

It appears that the political secretary would now like to distance himself entirely from the company and its publicly funded grant, however all appearances would suggest that it remains and always has been a family concern controlled by himself and his siblings who used the BEEP grant to funnel cash through another of their companies. It is now in the hands of his nephew.

Sarawak Report last week asked Syed Hamzah and his lawyers for their comments and explanations. They have not immediately replied.