Time For The Securities Commission To Investigate CMSB

The whistleblowing information had triggered a formal investigation within the company, resulting in a Board of Inquiry report which has now been widely leaked and viewed by Sarawak Report.

That report provides compelling evidence that the pair had conspired to use their positions in the company to pressure CMSB to hand a large data handling contract to a little known technology outfit named Vienna Advantage Asia, in which they secretly held controlling interests through a company named Silver Lining Systems Sdn Bhd. It has emerged that the son of the Chairman of CMSB, Abdul Rashid Manaf, also has shares in the same company (see below).

The pair also arranged for the outsourcing of CMSB private cloud to a supposed third party named CSF Advisers. Yet it has emerged that CSF Advisers were also secretly managed by the same Silver Lining Systems which they owned. 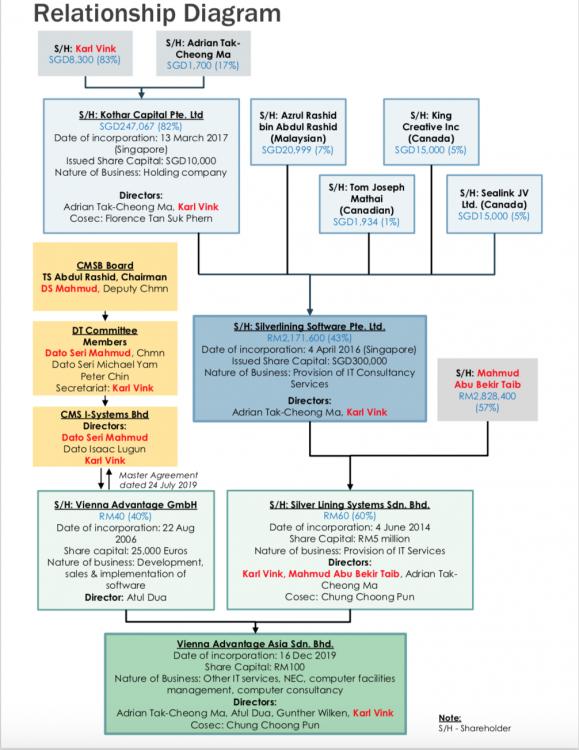 Karl Vink, whom Abu Bekir effectively promoted into his post according to insiders, did not once declare his interest in the matter according to this report commissioned by the company (see beneath).

Abu Bekir himself withheld from doing so until the last day of 2018, by which time Vienna Advantage had been shortlisted and had pretty much clinched the multi-million ringgit deal – even though he was the prime mover behind the decisions being made over this very matter. 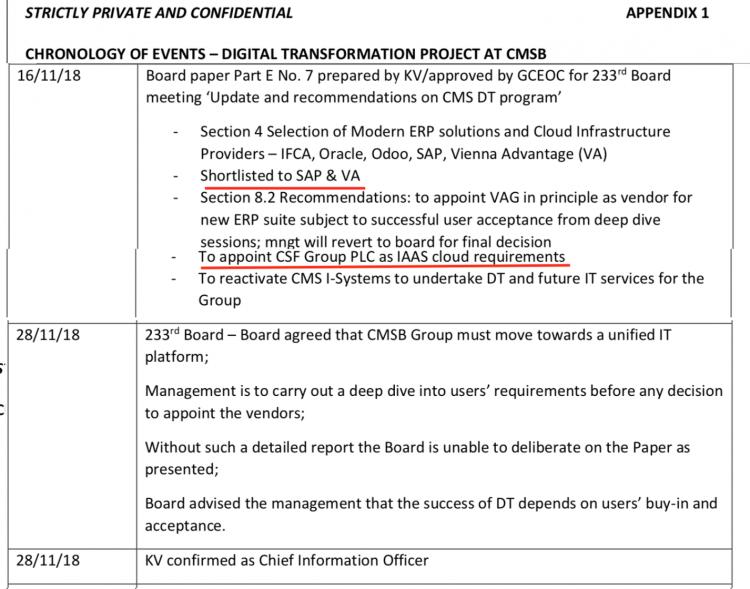 Indeed, the same report contains damning emails in which during the crucial period of company presentations and shortlisting over the second half of 2018 CMSB office staff were even urged to remove the listing of Abu Bekir’s personal interest in Silver Lining Systems/Vienna Advantage from his director’s submission of related party interests: 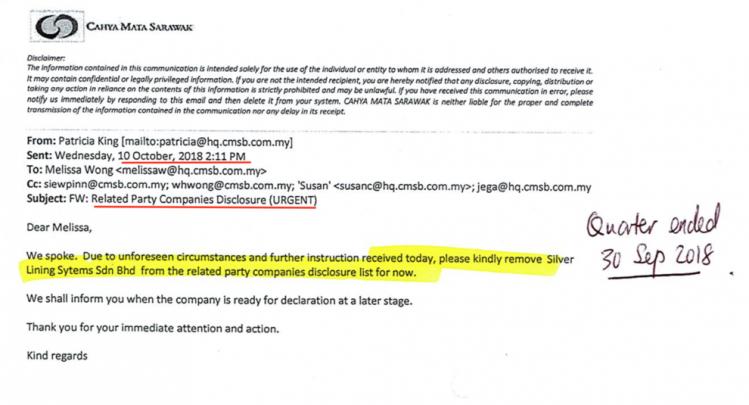 Staff instructed to remove the declaration of Abu Bekir’s interest in the ownership of Vienna Advantage during the crucial period when it was being presented for the contract and fellow shareholder Karl Vink was being confirmed in post. 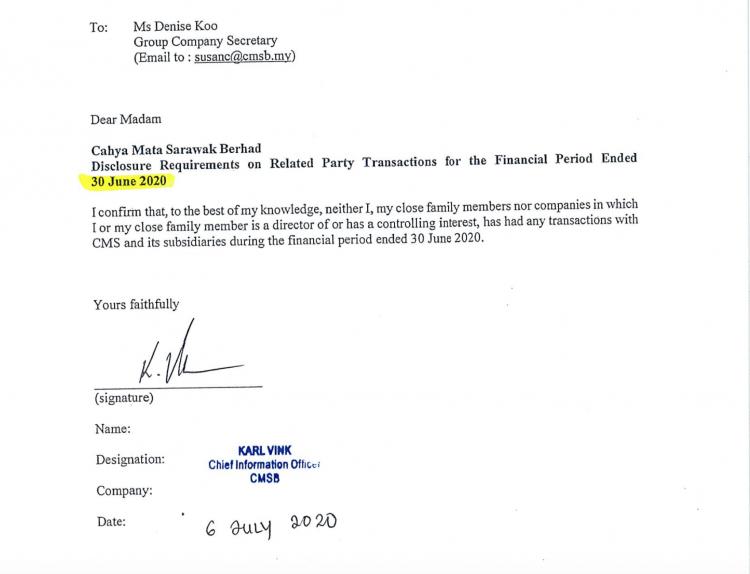 Yet, despite this damning evidence and having having originally sent a show cause letter to Karl Vink causing him to resign, and likewise asked Abu Bekir Taib to agree to be suspended as a director and Deputy Chairman of the company, the Board performed a volte face just a fortnight later on 6th May, claiming in advance of an ‘independent’ enquiry into the whole affair that the two men were entirely innocent of any wrongdoing after all.

An official CMSB statement announced the re-instatement of Abu Bekir as Deputy Chairman and the total exoneration of both men:

The Board also wishes to announce that the Board is completely satisfied that the allegations of conflict of interest made against Dato Sri Mahmud and Karl Vink, former CMS chief information officer, in relation to the award of the contract by CMS I-Systems Sdn Bhd, a wholly owned subsidiary of CMS, to Vienna Advantage GmbH are without any basis whatsoever.

That this has nothing to do with any independent enquiries and everything to do with Abu Bekir’s status as the son of the present Governor of Sarawak and representative of the largest shareholding family in the company can be taken as a given.

This is why the Securities Commission must now step in to protect the bulk of innocent investors. Sarawak Report has now received a further devastating whistleblowing letter which we lay out below for the benefit of shareholders and the commission itself, given the astonishing decision of the Board of the company to ignore devastating findings in its own report and to pre-empt its touted independent enquiry.

The accusation is that the hiring of Vienna Advantage and the secretly connected CSF has proved a costly failure that shareholders in this public company must now face the burden of. As of now, Deputy Chairman Abu Bekir Taib appears to have been let off scot free to continue to manage the company, despite being the beneficiary of the millions wasted on the companies he owns:

We have gathered some information and would like to share with you some background as to what led to the current scandal at CMSB and about Karl Vink.

In 2018, Karl Vink was hired as CIO on Dato Sri Mahmud’s insistence despite the Nomination and Remuneration Committee (NRC) being reluctant in hiring an individual that does not have the required IT qualifications and credentials for such a senior position of a public listed company. His CV is attached.

In 2019, CMSB embarked on a Digitalization Transformation program. Subsequently, a Digital Transformation Committee (DTC) was created with Karl Vink as the Secretariat and Dato Sri Mahmud as Chairman of the DTC. They then conveniently steered the DTC with recommendations and approvals of expensive projects that were detrimental to CMSB but benefitted them. One of the projects was an unheard-of ERP software, Vienna Advantage(VA) ERP, which was proposed and approved to replace the current SAP ERP that CMSB has been using. Another initiative was outsourcing of CMSB private cloud to a third party, CSF Advisers.

CMSB spent about 1 year and initial payment of RM7million to get VA ERP up and running. It failed miserably. Despite the CMSB users’ negative feedback with regards to the usability of the VA ERP System, Dato Sri Mahmud and Karl Vink just ignored their views and insisted that CMSB continue with the implementation of VA ERP. Crowe Horwath who was the Project Manager engaged by CMSB for the VA ERP System implementation, abruptly resigned while the project was still on-going when it became clear that VA ERP system was not enterprise ready and viable for implementation in CMSB.

After Crowe Horwath’s resignation, at a DTC meeting dated 12th August 2020, views were shared by CMSB users and the previous Audit Committee Chairman, Mr Peter Chin on the demerits of the VA system. Dato Sri Mahmud who was chairing the meeting silenced everyone by raising his voice and defended Karl Vink, VA and the VA ERP System and also threatened everyone that they have to deal with him personally if they still complain about VA ERP. Furthermore, there are two separate audit investigations and reports on VA ERP from EY and PWC, both indicated that the VA ERP System is not enterprise day as they had data integrity issues amongst other things.

In August of 2020, a whistleblower wrote to the Group Managing Director and Board of Directors revealing the shareholdership and directorship of companies related to VA and CSF that raises the issue of conflict of interest. A Board of Inquiry(BOI) was formed by CMSB’s Board made up of 3 Independent Directors. The Internal Audit department did the ground investigation and reported to the BOI.

3. Atul Dua and Gunther Wilken is the shareholder of Vienna Advantage Gmbh

6. Karl Vink was the current CIO of CMSB and who recommended Vienna Advantage ERP System

7. Dato Sri Mahmud was the current chairman of Digital Transformation Committee that approved the implementation of the VA ERP system.

The links are illustrated in a chart in the BOI report. These people have gone to great lengths to cover their tracks and involvements by using front companies and multiple layers of shareholdership.

However, they failed to declare this partnership with Vienna Advantage Gmbh(VAG) and continued to remain as the Chairman and Secretariat of the DTC. They ignored CMSB users’ negative feedback on the VA system and instead were clearly supporting the vendor who happens to be their business partner, Atul Dua, in this instance instead of doing the right thing for CMSB. They were clearly in breach of their fiduciary duties. This led to the losses of RM7mill when CMSB terminated the VA ERP system only after the issue was brought to the public domain by the whistleblower.

In September of 2020, in the process of investigating the allegations in the first whistleblowing letter, it was discovered that CSF was merely a front company for Silver Lining Systems. Karl Vink’s cronies in the IT department colluded to make this possible. It was discovered through investigations of email correspondences that at least 8 employees of Silver Lining Systems also have email addresses of CSF. These are their names and email addresses:

Karl Vink was the CEO of Silver Lining Systems just before joining CMSB. We had the unfortunate chance to work with him during his short time as CIO of CMSB. Immediately on joining CMSB, he takes on a ‘bossku’ attitude, throwing Dato Sri Mahmud’s name everywhere. He was based in KL and travelled to Kuching every other week which was strange because every other senior manager of CMSB is based in Kuching. Soon after joining, he hired his cronies to the IT department of CMSB. With Dato Sri Mahmud as the Chairman of DTC, he had practically a freehand to do whatever he wanted in CMSB and no one would dare to go against his wishes for fear of him poisoning Dato Sri Mahmud’s ear.

CMSB was due to pay a further RM10million for the unusable VA ERP if not for the whistleblow. CMSB was also paying a very high service fee to CSF for cloud hosting, 4 to 5 times more for a similar service that another hosting company would charge.

Karl Vink knows little about IT according to our IT engineers but can talk very well …. For reasons beyond us, Dato Sri Mahmud apparently really likes Karl Vink, even putting his own son to work with Karl Vink at SLS. The employees in the CMSB IT department only have bad things to say about Karl Vink with a few suffering depression due to his agonizing mind games and bullying management style.

Karl Vink did not reply to a show cause letter that was given to him from the BOD and simply resigned in September 2020. Karl also until today did not take legal actions against CMSB for constructive dismissal. That in itself shows that … has no explanation to the allegations in the whistleblowing letter.

..How is it that .. Dato Sri Mahmud got off scot-free ? Even after the BOI report, many new details were discovered about the extent of Karl Vink’s and Dato Sri Mahmud’s planned projects to benefit themselves through CMSB’s so-called Digital Transformation.

The authorities should investigate and prosecute these characters as no one should be above the law even if his father is the governor of Sarawak. Currently, Dato Sri Mahmud is conducting a witch hunt and already managed to strong arm the Board members into maliciously announcing the suspension of the CFO based on wild unsubstantiated allegations, a 16 year veteran with a good reputation in the industry and an unblemished track record. Rumour has it that he is also going after Dato Isaac Lugun, the Group managing Director too. Soon, more will follow as he is determined to stay and exert his power and dominance.

Thank you and best regards,

Sarawak Report has also published the above letter, allegedly from a ‘CMSB Employee’ with a view to informing the 77% of shareholders who will be convening at the company’s AGM on May 31st (the remaining 23% of shares are owned by Abu Bekir’s own family).

With over a week before then the Board also has plenty of time to refute these allegations and find the necessary evidence to do so should they consider that to be appropriate.

Such claims must be vetted and proven by the Securities Commission nonetheless, given the flip-flopping behaviour of a Board that has reversed its own suspension of the son of the most powerful and wealthiest man in Sarawak…. without properly explaining why.